Just got DITCHED! Bride-to-be flees her fiancé at Heathrow Airport taking his luggage and £5,000 cash just moments before they were due to board flight to Rome wedding

A cruel bride-to-be has abandoned her fiancé at the airport, allegedly robbing him of his suitcases and £5,000 cash.

A British man was said to be ‘totally in bits’ after his soon-to-be wife vanished with his belongings while he went to the toilet at Heathrow’s Terminal 5.

The couple, in their 40s, had got engaged a day earlier, reported the Sun, and told check-in staff at the west London airport that they were heading to Rome to get hitched.

The unnamed man, who eventually called in police, said she had taken off with £5,000 he had gifted her for the wedding.

A Met Police spokeswoman confirmed to the Sun that they were investigating.

She added: ‘Enquiries continue. No arrests have been made at this time.’ 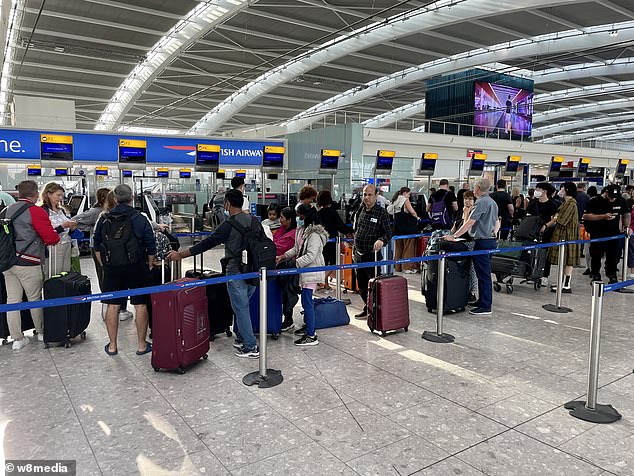 A British man was said to be ‘totally in bits’ after his soon-to-be wife vanished with his suitcases while he went to the toilet at Heathrow’s Terminal 5. (Pictured: Terminal 5 in July, 2022)

One onlooker said: ‘He was in bits — totally inconsolable. Apparently, they’d only met very recently and he’d fallen head-over-heels for her.

They said they had planned to marry in Rome and were about to fly there when ‘she did a runner while he went to the loo and vanished with all their belongings.’

The witness said staff ‘looked everywhere for her’ but that ‘she was nowhere to be found.’

They added: ‘In the end, the police were called. Even her name was in doubt by then.’

It is not yet clear whether the woman left the airport or flew to another country.