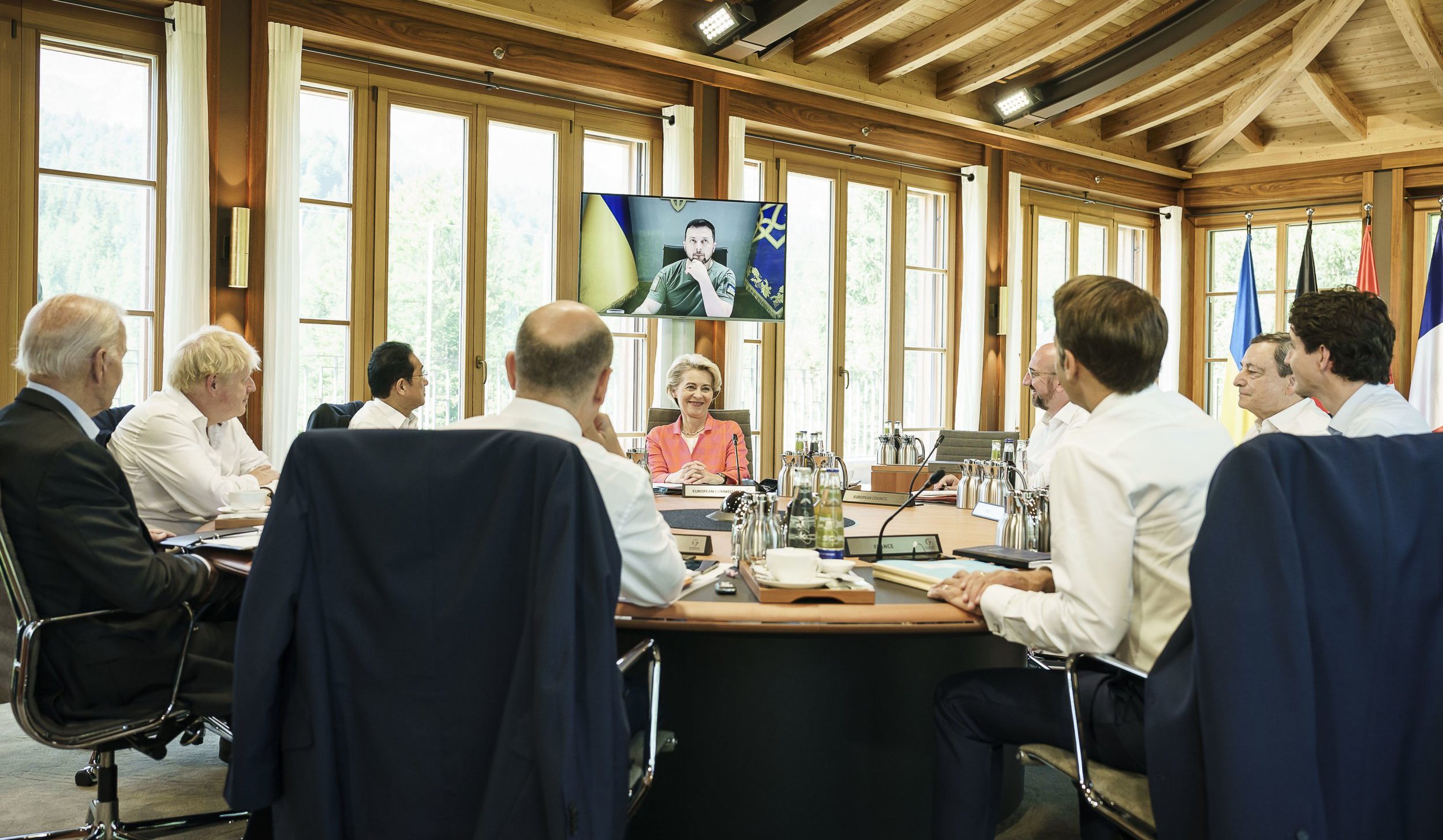 Leaders of the G7 countries must urgently send Ukraine more military supplies if they want to be ‘partners, not observers’, Volodymyr Zelensky has warned.

The Ukrainian president addressed Boris Johnson and his counterparts from the US, Canada, Japan, France, Germany and Italy after they gathered in the luxury alpine resort of Schloss Elmau in Bavaria.

He spoke to them privately via video link from his bunker in Kyiv, but said before the speech he would call for new defence systems and the speeding-up of previously agreed shipments.

It comes after Putin’s forces began firing missiles at Kyiv for the first time in weeks and ramped up their shelling of cities in eastern Ukraine.

‘We need a powerful air defence – modern, fully effective – which can ensure complete protection against these missiles.

‘We talk about this every day with our partners. There are already some agreements.

‘And partners need to move faster if they are really partners, not observers.

‘Delays in the transfer of weapons to our state, any restrictions are actually an invitation for Russia to strike again and again.

‘The occupiers – these terrorists – must be beaten with all our might so that they do not think they can put pressure and outplay someone.’

His calls were backed by Mr Johnson, who insisted the G7 remained united in support of Ukraine in the face of growing ‘fatigue’ around the world and underlined the need to help it beat Russia’s grain blockade.

Many countries rely on farm produce from Ukraine, which is one of the world’s biggest grain exporters, but Putin’s navy is stopping ships from leaving Ukrainian ports and reports suggest his troops have been stealing harvests from local farmers and selling them from Russian territory.

The prime minister said: ‘I think everybody came to the G7 in Germany, really hearing a lot about Ukraine fatigue, the anxieties of other countries around the world about the continuing war, the effect on food prices, on energy prices.

‘And what’s really struck me in the last couple of days has been the amazing consistency of our resolve, the continuing unity of the G7.’

He pledged £10 million to repair Ukraine’s war-torn railways in hopes of creating a land route to export grain and £1.5 million towards a testing process to identify whether grain sold by Russia was taken from Ukrainian farmers.

Meanwhile, Downing Street officials downplayed reports of a diplomatic rift with France after it was claimed the French president, Emmanuel Macron, might push for a speedier end to the conflict at Ukraine’s expense.

Macron has repeatedly held talks with Putin and warned that any peace deal must not ‘humiliate’ Russia.

Mr Johnson said the G7 leaders were united because ‘the logic of the position is still so clear, there is no deal that President Zelensky can really do’.

He admitted Ukraine’s forces faced a ‘very difficult’ situation but have demonstrated an ‘incredible ability to push back’.