David Beckham made a stop Stateside to attend the Earthshot Prize gala in Boston on Friday, joining a star-studded guest list.

The footballer, 47, opted for a smart black tuxedo as he arrived solo ahead of presenting an award at the eco-friendly occasion in MGM Music Hall, before speaking to the Prince and Princess Of Wales backstage.

A host of celebrities turned out to support the Royals alongside David, including Ellie Goulding, Rami Malek, and Halle Bailey – star of Disney’s upcoming live-action version of The Little Mermaid. 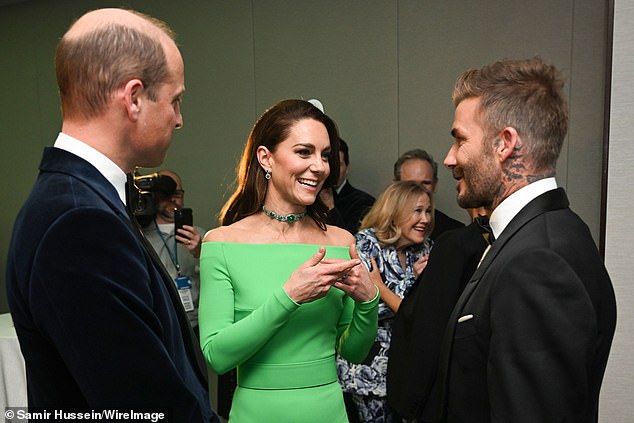 Guests of honour! Dapper David Beckham, 47, was seen mingling with the Prince and Princess of Wales backstage at the Earthshot Prize Gala in Boston on Friday

David was in high spirits as he arrived for the event, sporting his classic black suit while walked on the recycled green carpet.

After arriving for the event, David was seen speaking with the Prince and Princess of Wales backstage, as he prepared to take to the stage to present an award.

David was seen embracing the Princess and shaking hands with William, having worked with the Prince in the past through his position as President of the FA. 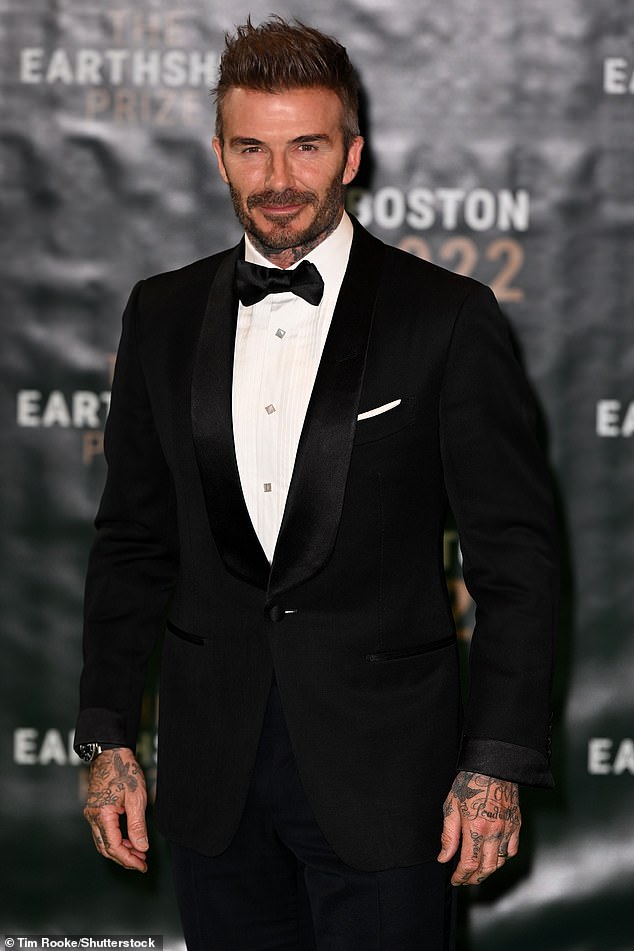 Looking sharp! The footballer opted for a smart black tuxedo as he arrived solo ahead of presenting an award at the eco-friendly occasion in MGM Music Hall 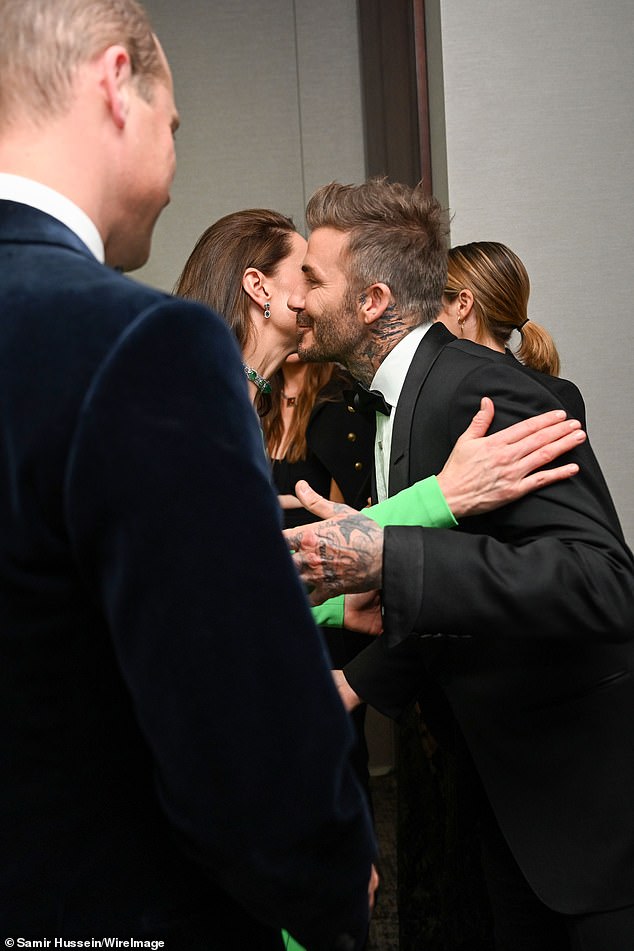 Pals! Upon arriving for the awards, David was seen embracing the Princess, with the pair chatting about the environmental event 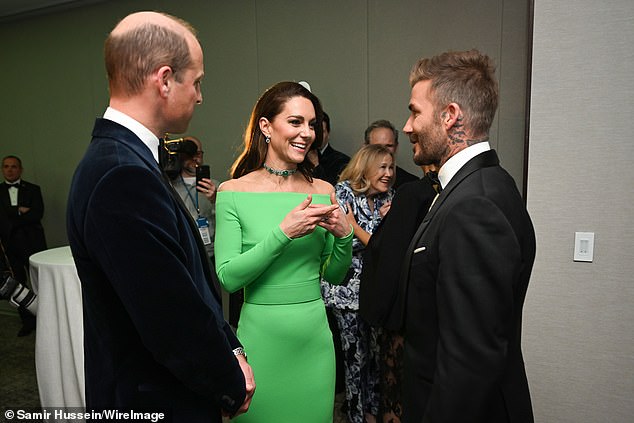 Friendly! David was seen chatting to Kate while William, who is President of the Football Association, watched on

The star had previously been in Qatar to attend several of England’s matches during the 2022 World Cup, after his controversial £10 million deal to be an ambassador for the Middle Eastern nation.

The sportsman has landed himself in hot water in recent months for refusing to step down from fulfilling his £10million Qatar World Cup deal amid anger over human rights and LGBTQ+ issues. 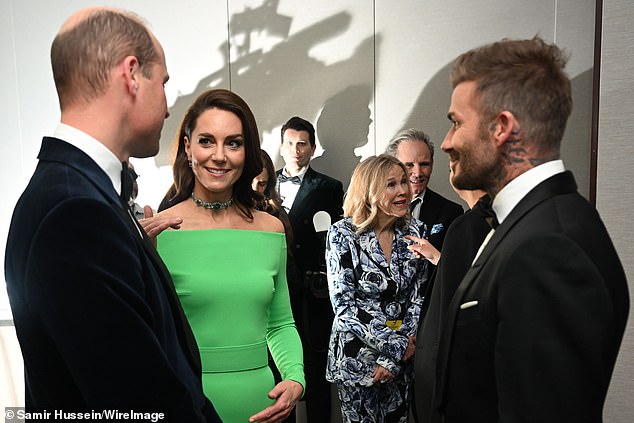 Grand occasion: The trio were seen speaking backstage, ahead of the grand occasion, where David was set to present an award 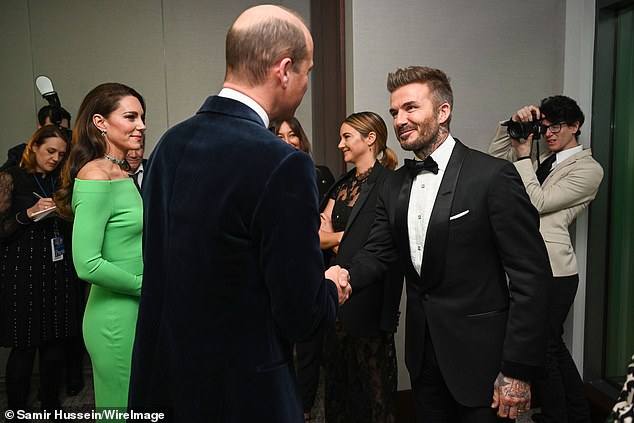 Good to see you again! David was also seen shaking hands with William as they all arrived for the star-studded environmental awards event 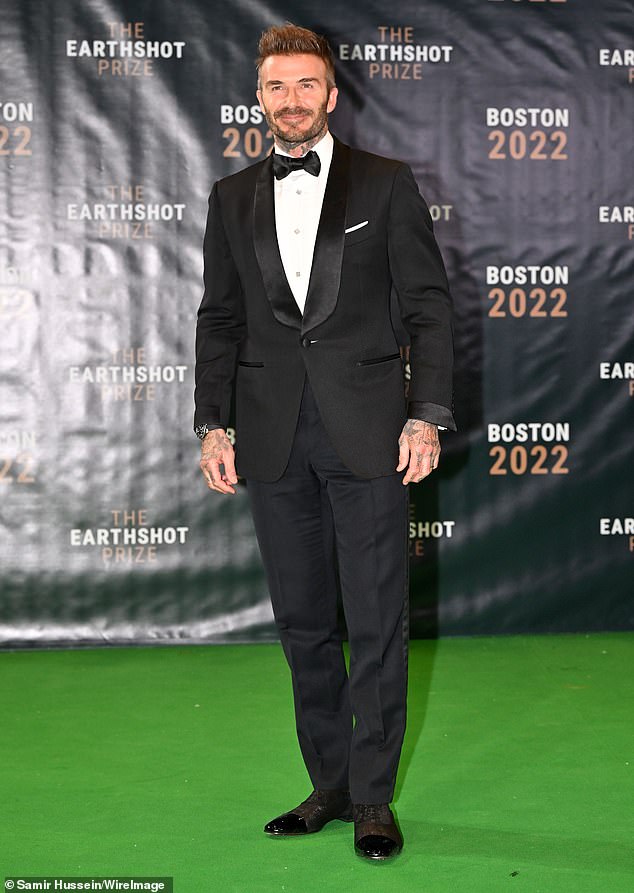 Smart: David posed up a storm in his smart suit as he walked the carpet at the event

David has been criticised for his £10million Qatar World Cup deal.

The decision by FIFA to hold the World Cup in Qatar has been surrounded by controversy – particularly in relation to migrant workers and the LGBTQ+ community.

David has not spoken about the country’s oppressive laws despite warnings over human rights abuses and an abysmal record on LGBTQ+ issues.

The Earthshot Prize – and its accompanying TV broadcast – is intended to be one of the greenest televised events in history. 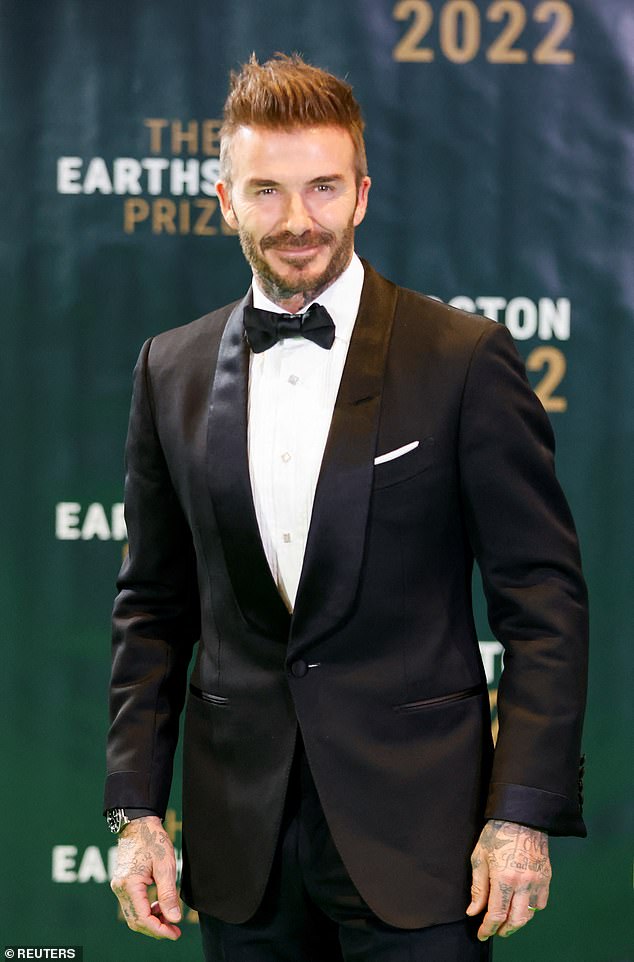 Sharp: David was in high spirits as he arrived for the event, sporting his classic black suit while walked on the recycled green carpet 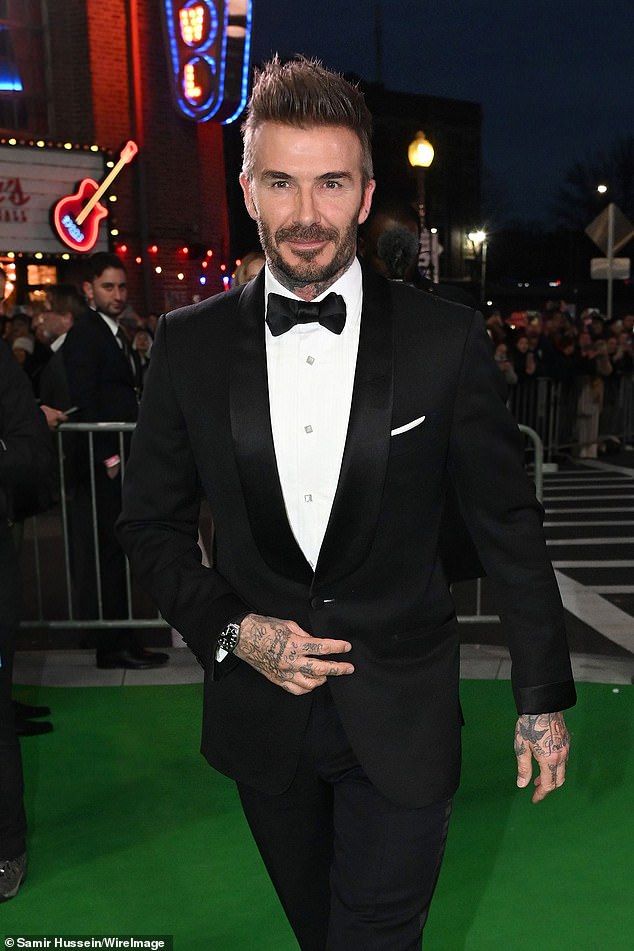 Jovial: The sportsman was in good spirits as he arrived solo at the event 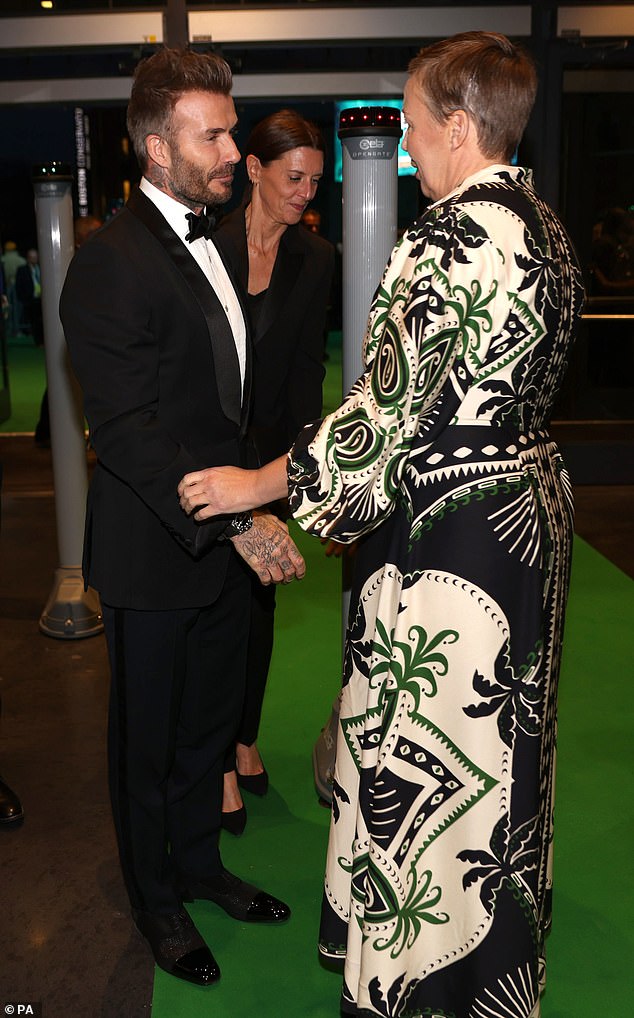 Guest of honour: Upon his arrival, David was seen meeting some of the other guests in attendance for the environmental awards event

Even before the guests arrive at the gala they will have been given a very green dose of eco-friendly advice and rules to follow, with attendees encouraged to ‘consider their clothing’ for the occasion and opt for ensembles that can be re-used, or have already been purchased second-hand.

Travel plans for guests have also been given environmental updates: all transportation being used with Boston is electric or hybrid and any ‘unavoidable’ flights that were taken have been ‘recorded and the CO2e impacts were calculated and balanced’.

Even William and Kate jetted into the US on a commercial British Airways flight – no doubt hoping to avoid the controversy that has plagued the Sussexes over their repeated use of private jets, despite the couple professing themselves to be environmentalists. 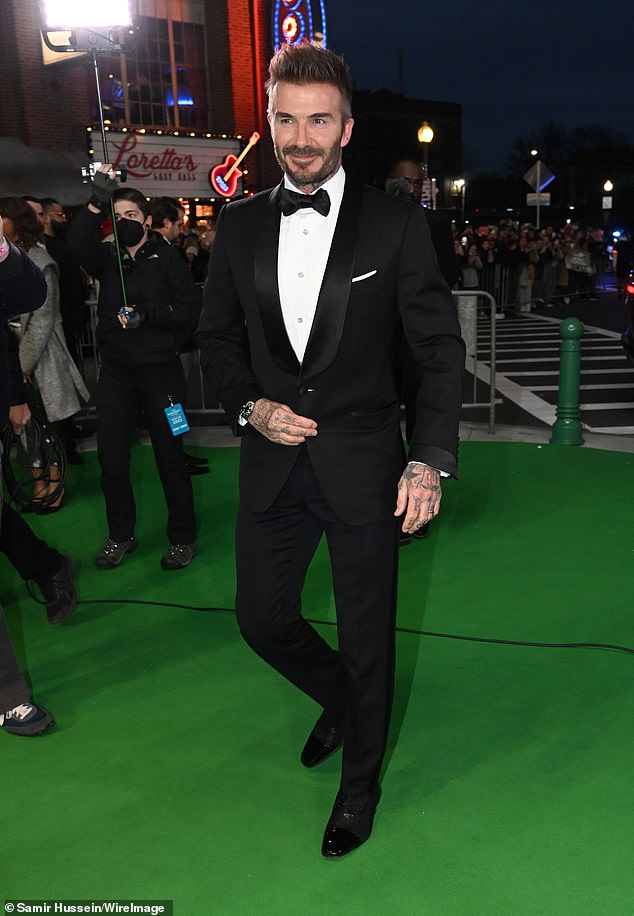 Important: The Earthshot Prize – and its accompanying TV broadcast – is intended to be one of the greenest televised events in history 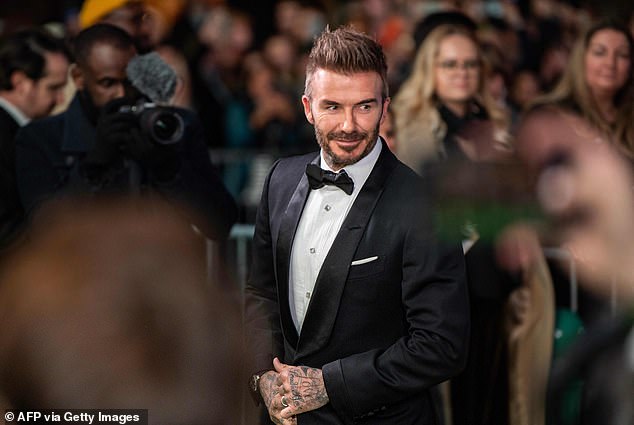 Sports star: It was no surprise that David earned a huge reception from fans waiting outside of the event Happy: David had previously been in Qatar to attend several of England’s matches during the 2022 World Cup 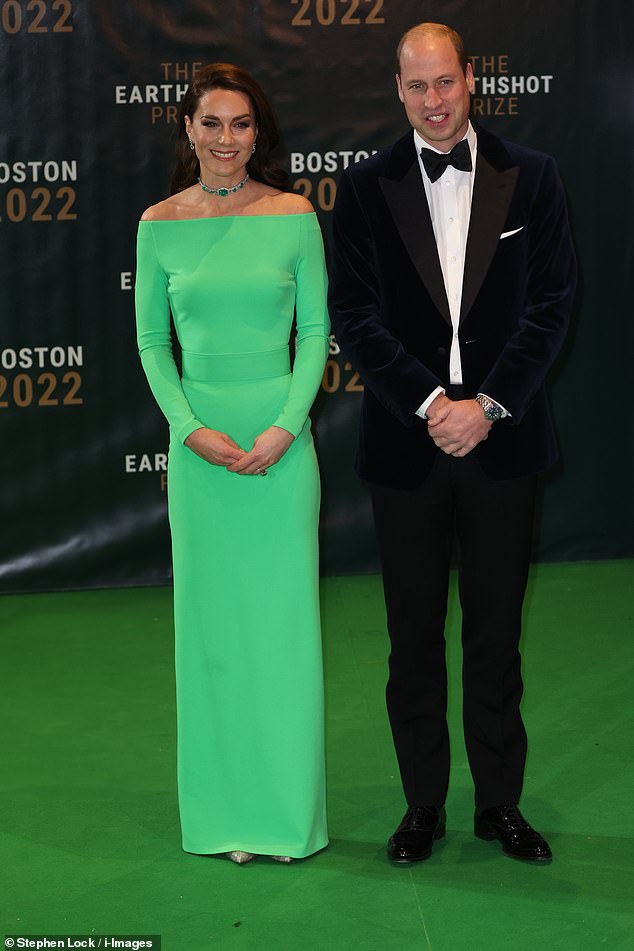 Glamorous! On the final day of their tour of the United States, the Prince and Princess Of Wales were in attendance for the event

Then, upon their arrival at the event, guests will be treated to a host of ecologically-minded measures, from the plant-focused decor to the vegan and vegetarian-only catering options.

Instead of a red carpet for the stars to walk down, last year’s green carpet is being re-used – and it will be recycled afterwards.

All the flowers are also grown locally within a 100 mile radius of the MGM Music Hall in Boston. Most are ‘root ball’ plants, wrapped in burlap, to stay as green as possible and will be donated to local community-based organization after the show. 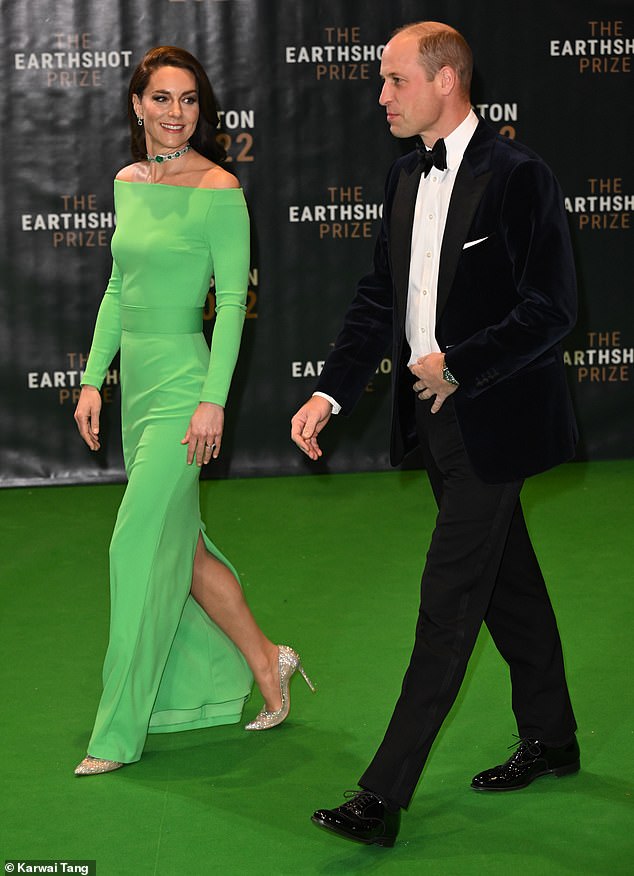 Stunning: The Princess of Wales put on a dazzling display in a vibrant green off-the-shoulder gown as she and Prince William arrived for the event

BBC Studios, who are staging the event and won a BAFTA for last year’s show, have flown over just 10 members of staff out of a crew of 150, hiring local firms instead.

No gas lighting will be used with all fixtures being LED battery-operated and charged locally in Massachusetts.

The stars’ hotel is walking distance from the venue and everyone is being encouraged to either use the tram or take a fleet of electrically-powered and hybrid taxis.

Even the make-up being used is largely vegan and certified cruelty-free, while the food being served to stars and crew is plant-based – and there is a ban on single-used plastics.

‘We are encouraging everyone that is coming to the awards to take the lowest carbon impact option possible. What isn’t will be offset.’ 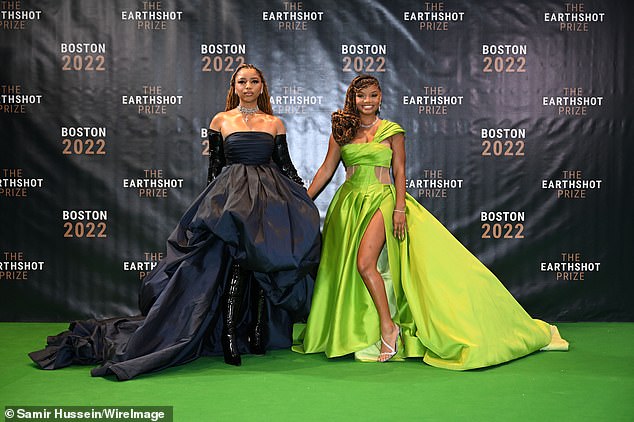 Glam: A host of celebrities turned out to support the Royals, with Halle Bailey – star of Disney’s upcoming live-action version of The Little Mermaid – and her sister Chloe among the first