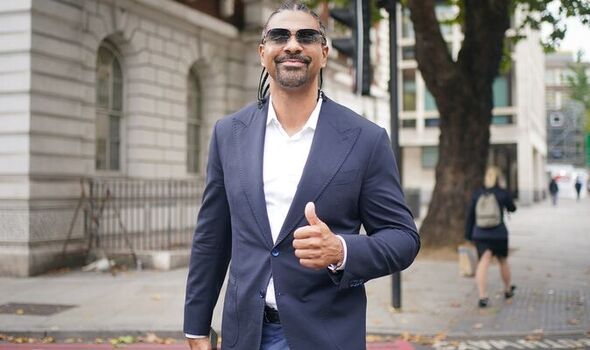 Haye, 41, was accused of grabbing a man’s throat and threatening him at a Paul Chowdhry show at London’s Hammersmith Apollo. Nickesh Jhala told Westminster Magistrates’ Court that Haye said: “Say one more word and I will kill you” on October 30 last year.

Haye always denied the charge of assault by beating.

And halfway through the trial yesterday Chief Magistrate Paul Goldspring threw out the case saying the evidence was not strong enough.

Outside the courtroom, Haye said he was “very happy, very pleased” and was going to celebrate.

The Londoner added: “The lawyer did an amazing job explaining what the CCTV footage showed and I am thankful venues have CCTV. Without it, I would have been found guilty as I had four witnesses saying I did something I didn’t do. They could have listened to the witnesses but thank God they didn’t.”

Mr Goldspring was scathing of how the prosecution’s case was brought to court.

He said: “We have concluded we could not convict on battery because we are not in possession of evidence that is sufficient. The Crown cannot have its cake and eat it.

“None of the witnesses were consistent enough among themselves or sure of themselves in words used so that we could be sure.

“We are satisfied that in this case, there is no case to answer.”