Ellie Goulding and Sam Ryder’s surprise duet at a charity gig in London got off to an awkward start as the Flashlight singer missed her cue to start singing.

Eurovision icon Sam took to the stage in the capital’s Lafayette venue on Monday for a special concert in aid of charity War Child, and to mark the launch of National Album Day on October 15.

Fans were treated to performances of his Eurovision hit, along with tracks from his upcoming album and several covers – including Metallica’s Master of Puppets.

One particularly special moment saw Sam introduce Ellie to the stage as a surprise guest, with the pair having hit it off after meeting on BBC’s Big Breakfast earlier this year.

They announced they would perform a duet to Rihanna’s 2012 hit Stay, with the crowd, naturally, going wild – however while Sam started off the hit, Ellie became just a tad confused.

Raising the microphone as she prepared to sing, Ellie could be heard taking a breath – before turning to Sam and the keyboard player and saying: ‘Oh my God sorry, so sorry!’ 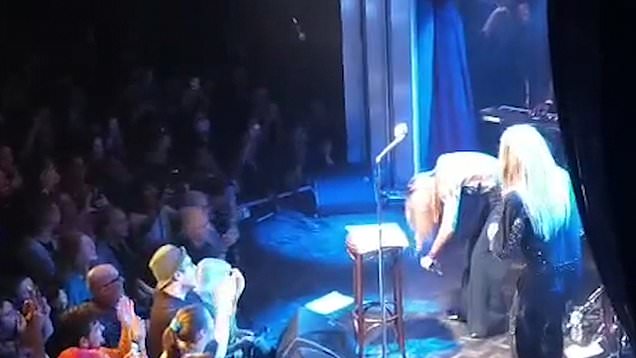 Both Ellie and Sam began laughing, with the audience cheering in support as the singer sheepishly took a bow.

The crowd continued to support her during the awkward moment, with one person heard shouting ‘You’ve got this Ellie!’ and the Space Man singer leading another round of applause.

Love Me Like You Do chart-topper Ellie then attempted to join in the track again before changing her mind and announcing: ‘Let’s just start again! Now I’ve got it!’

It turned out to be second time lucky, with Ellie expertly following Sam’s introduction with her haunting vocals, leading to a gorgeous duet between the pair.

While Ellie may have been embarrassed by the initial blunder, the atmosphere in the audience was hugely welcoming and the singer received even more applause and cheers when the song came to an end.

The night proved a big hit for Sam and the War Child charity, having also been livestreamed on TikTok where fans were encouraged to donate directly to the campaign.

Speaking to Metro.co.uk ahead of the gig, Sam said he felt ‘honoured’ to support the charity, adding that music is something we ‘all turn to in trying times and dark times.’

He added that he hoped the gig would mark an experience ‘where we can celebrate these wonderful moments of unity and togetherness’ – which, clearly, it was.