Heidi Montag has shared the name of her newborn son she welcomed with husband Spencer Pratt on Thursday.

Just hours after giving birth, The Hills veteran, 36, said on Instagram Stories that their second child has been named Ryker Pratt. 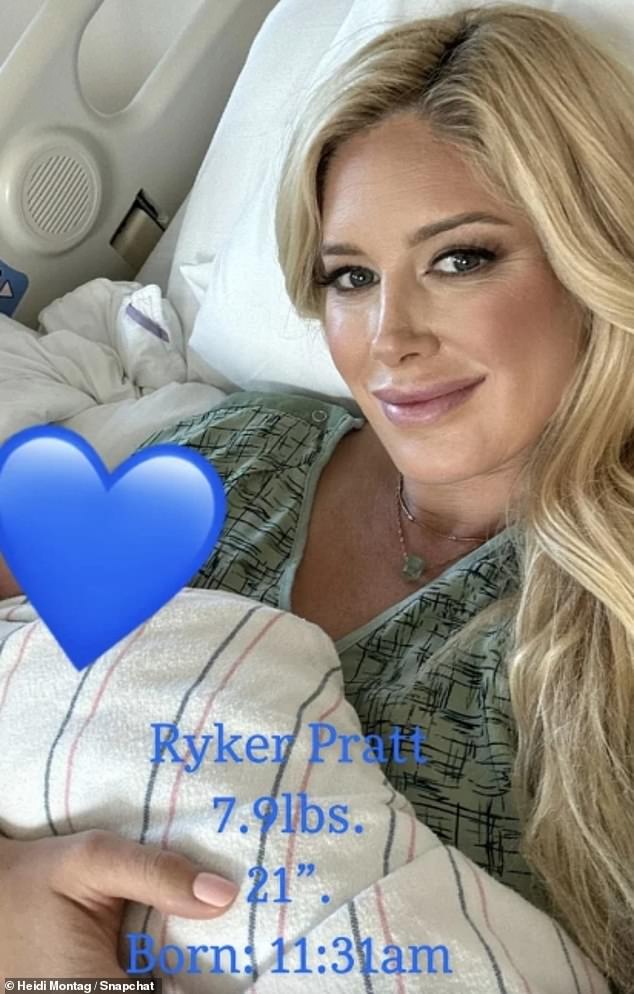 Baby mine: Heidi Montag announced her newborn son’s name on her Snap Story this Thursday night, hours after delivering him

Heidi rushed to the hospital Wednesday after going into labor, left, then returned the following morning to deliver a ‘7lb and 9oz’ bundle of joy.

‘Both baby and Mom are happy and healthy!’ their reps confirmed to DailyMail.com. 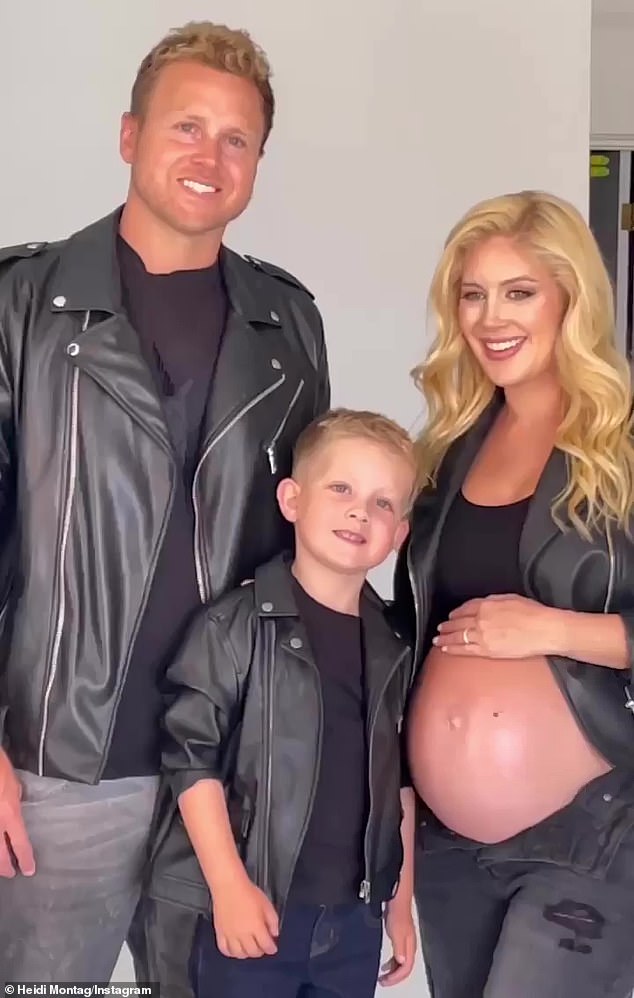 Congratulations! Heidi Montag and Spencer Pratt have reportedly welcomed their second child on Thursday, after teasing his imminent arrival on TikTok

The lovebirds posted filmed videos before welcoming their infant, which showed Montag getting her makeup professionally done as she relaxed and ate a sandwich.

Back in July, the couple joyfully revealed that she and Pratt are expecting another boy.

Spencer, 38, and his wife already share a four-year-old son called Gunner, who they said was ‘so excited’ over their news that he would be getting a brother. 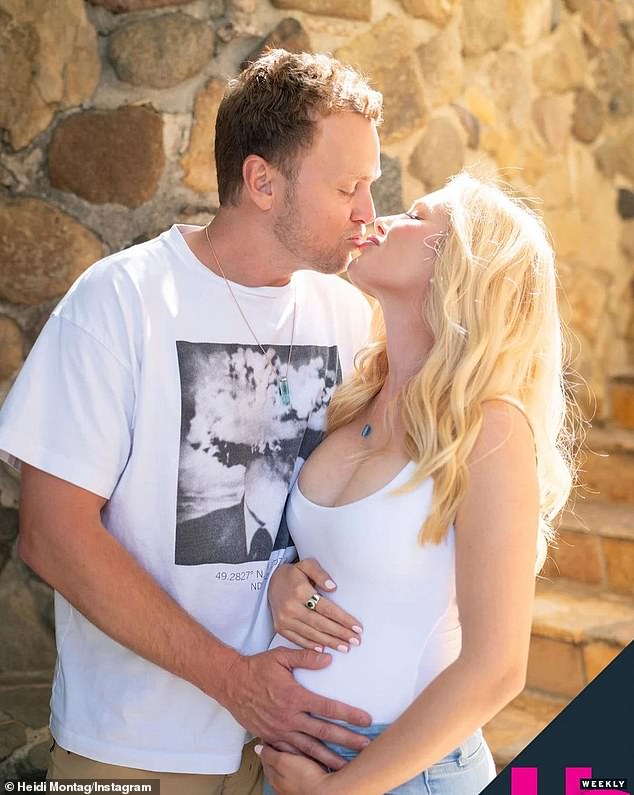 So exciting: After going into into labor yesterday, the 36-year-old reality star finally gave birth after leaving the hospital and returning this morning. to a ‘7lb and 9oz’ baby boy 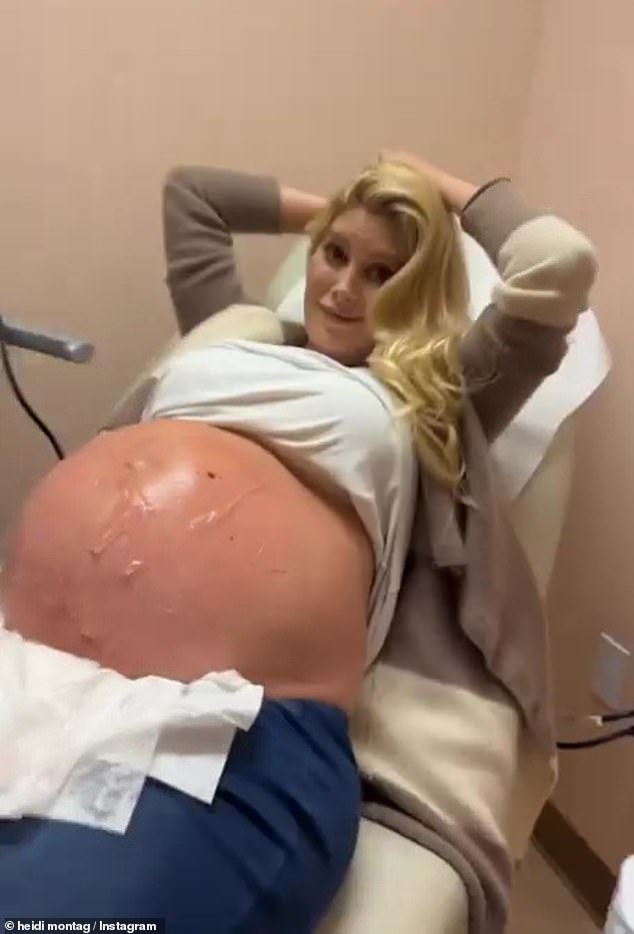 Ready to pop! On Wednesday, she revealed on TikTok that her son was she was definitely ‘going to have a baby in the next day or two’

Heidi spilled to Us Weekly that she ‘couldn’t be happier’ the baby is a boy ‘because ultimately my biggest prayer was whatever would be the best for Gunner.’

She announced her pregnancy at the beginning of June, debuting her bump on the cover of Us Weekly and revealing she is due in December.

The next month she told the same magazine: ‘I’m having a boy! Oh, my gosh… I did the earliest test to find out and I just felt like my doctor had the answer so I called. And I was like: “Hey, just wanted to check in to see if you guys got the result?”‘

Heidi revealed that ‘they were like: “Actually, we just got them 10 minutes ago.” So I couldn’t wait for Spencer and I was like: “OK, I’m ready!” They were like: “It’s a boy!” And honestly, I was so shocked.’ 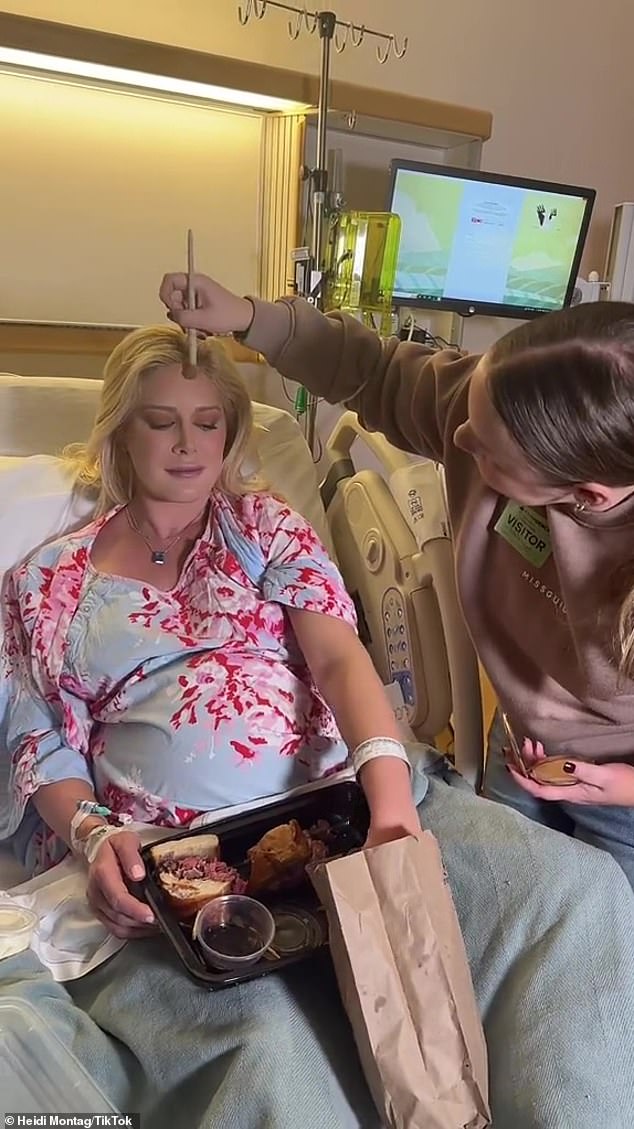 Growing family: A source revealed to TMZ that the family welcomed their latest addition at 11:31 a.m., and it only took ‘about 45 minutes’ for her to give birth 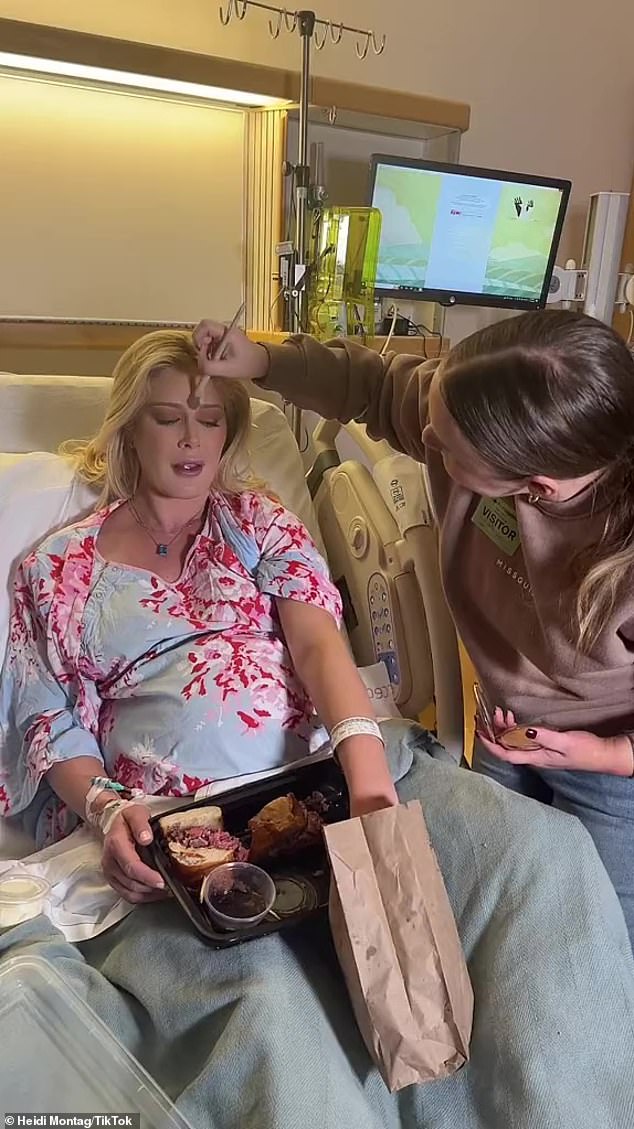 Relaxed: Back in July, the couple joyfully revealed that she and her husband Spencer Pratt are expecting another boy 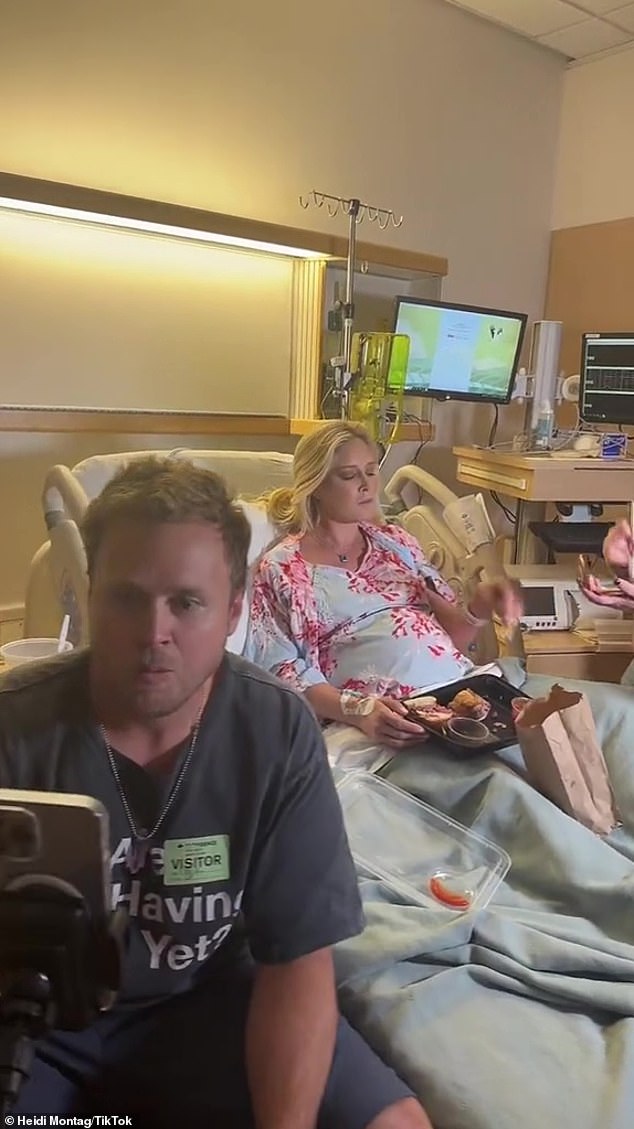 At ease: As she prepared to deliver her baby, Montag enjoyed a sandwich and had her makeup professional done

Although she initially ‘was convinced’ she would have a daughter, she ‘was going back and forth because everything felt the same as [when I was pregnant with] Gunner. I was like: “These are the exact same symptoms, the exact same thing.” But I think for the past year I kind of thought I’d have a girl.’

Once ‘the shock wore off’ at the news she will have another son, she was delighted because of what it meant for Gunner.

‘I’m so glad we found out early. Gunner really wanted a brother and he wanted a brother to copy him and to share so many things with him so knowing that we’re having a boy, we are all so excited. It makes so much sense for our family.’ 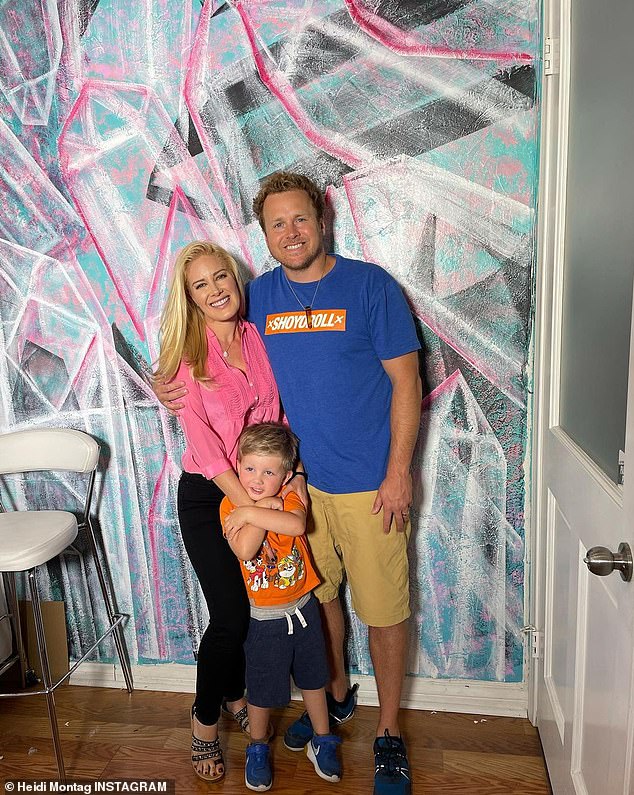 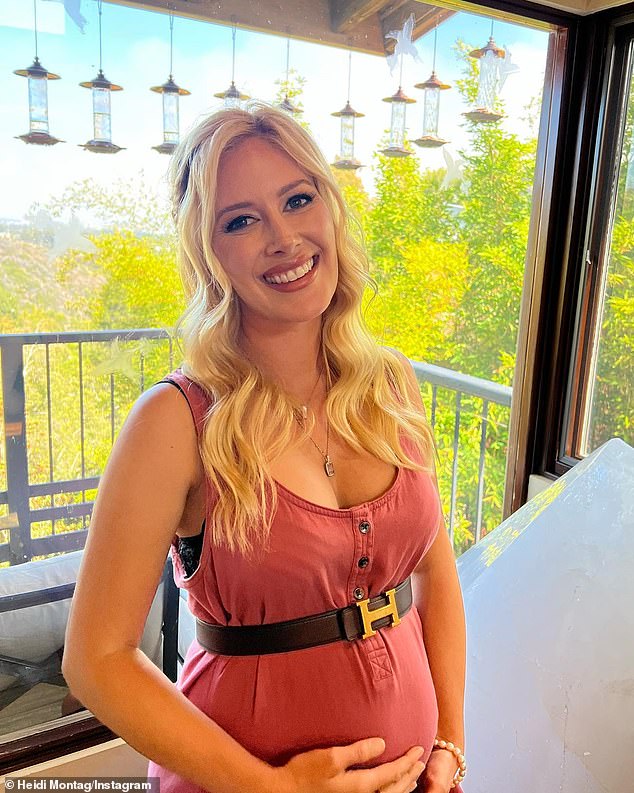 Delighted: Heidi spilled to Us Weekly that she ‘couldn’t be happier’ the baby is a boy ‘because ultimately my biggest prayer was whatever would be the best for Gunner’

Meanwhile Spencer was also ‘shocked’ at both of the sex of the baby and at Heidi for discovering their news by herself.

‘Speidi,’ as they are affectionately known to their fans, became reality stars together on The Hills and got married in 2008 during its run.

After welcoming Gunner in 2017 – and bringing DailyMailTV cameras into the hospital with them – they struggled to have a second child. 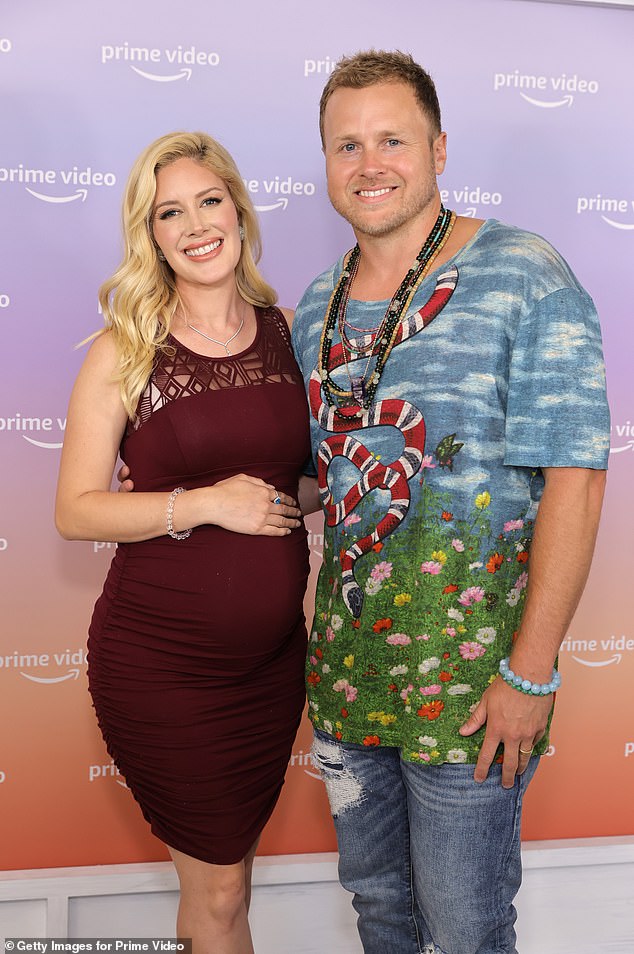 The process: When she revealed she is pregnant again, Heidi told Us Weekly that it took ‘about 18 months’ of trying before she and Spencer conceivedo

When she revealed she is pregnant again, Heidi told Us Weekly that it took ‘about 18 months’ of trying before she and Spencer conceived.

Their friend Brody Jenner, whom they co-starred with on The Hills and The Hills: New Beginnings, even told them he would pay for them to undergo IVF.

Although she felt ‘really blessed’ to have Gunner and was ‘was trying not to be ungrateful for my life and for what I do have,’ she could not escape the nagging sensation that a ‘person was missing in our family that I had this intense love for.’ 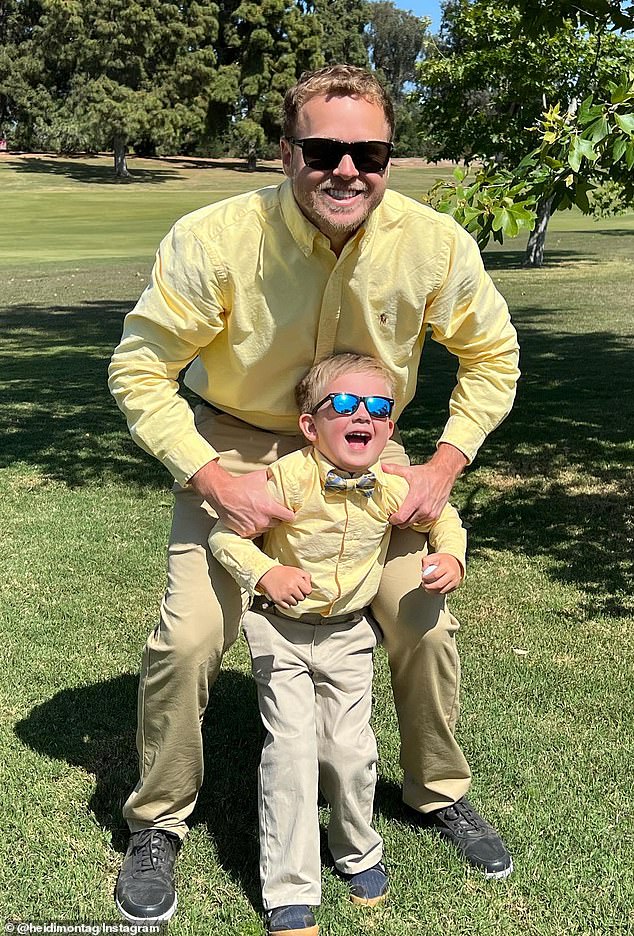 Heidi shared that ‘it was such a deep longing in my heart that I had – wanting a sibling for Gunner and wanting to expand our family.’

She had uterine polyps surgically removed last August in order to up her chances of becoming pregnant again. 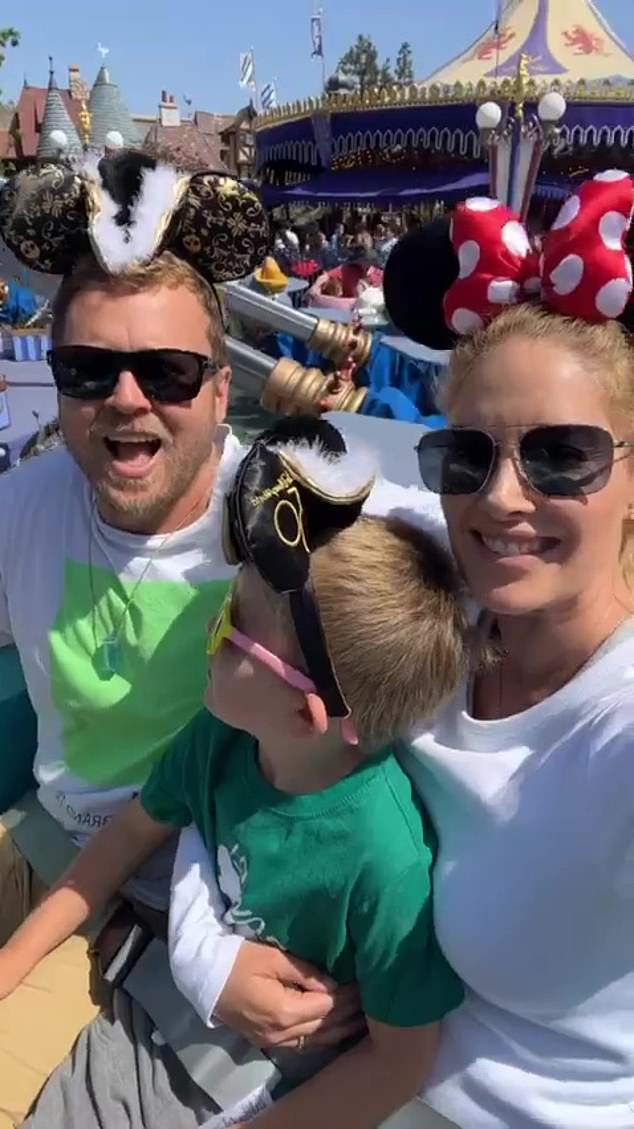 Having a ball: ‘Speidi’ also took their firstborn to Disneyland late last month, which Heidi wrote was ‘on my bucket list of things to do with Gunner before the baby comes’

Over the summer he excitedly shared regular pregnancy updates on Instagram, dishing that she is ‘Definitely getting bigger faster with the 2nd baby!’

‘Speidi’ also took their firstborn to Disneyland in June, which Heidi wrote was ‘on my bucket list of things to do with Gunner before the baby comes.’

In a heartwarming mirror selfie posted June 30, she caressed her baby bump and shared in the caption that she was 18 weeks along. 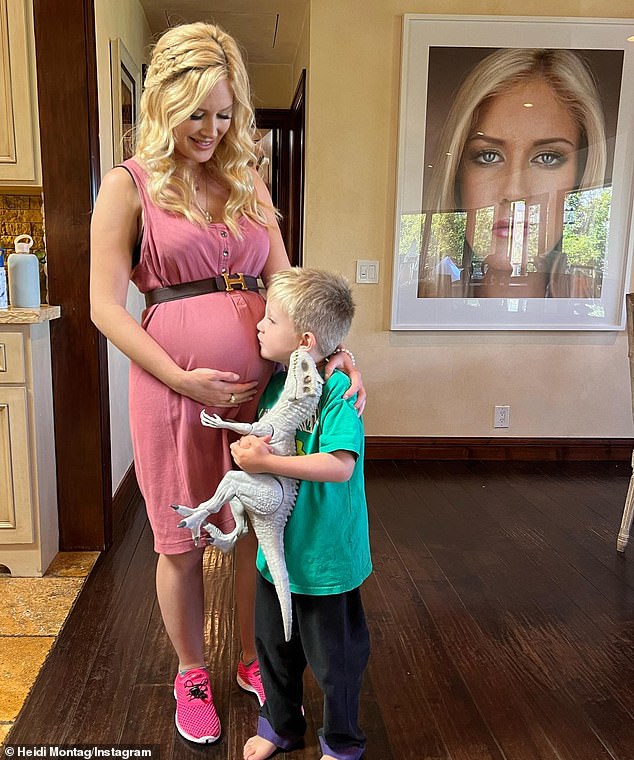 Making it happen: Heidi shared that ‘it was such a deep longing in my heart that I had – wanting a sibling for Gunner and wanting to expand our family’

Meanwhile this May, she made the bombshell announcement that she was ‘going into real estate’ to escape the financial instability of showbiz.

‘So, I’m like, we need a different income,’ she told The Perez Hilton Podcast. ‘I don’t want to be waiting on TV money. We’ve spent way too much of our money.’

When Perez asked why ‘just’ Heidi was going into real estate, Spencer assured him that ‘she’s first’ but that he would ultimately make the leap as well. 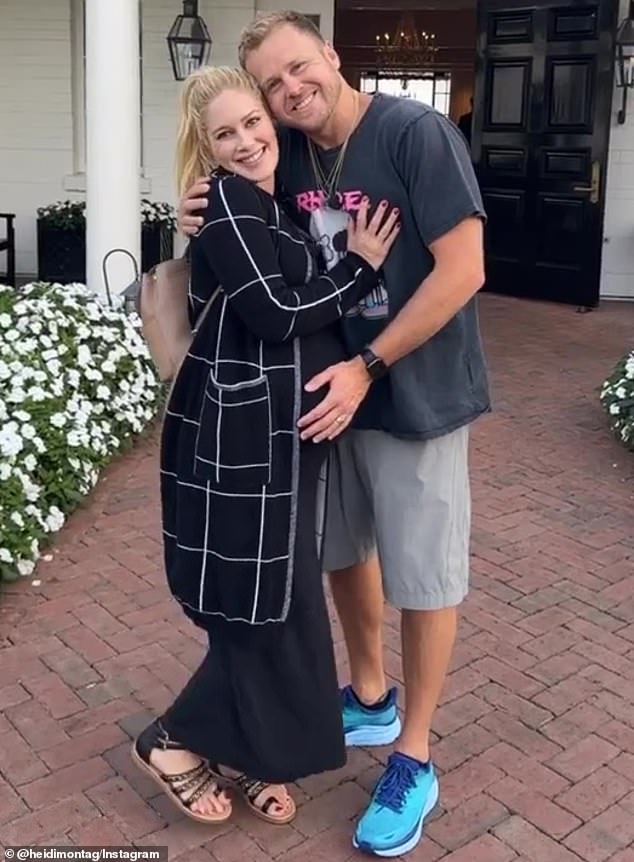 The process: She regularly gave her fans updates during her pregnancy, dishing that she is ‘Definitely getting bigger faster with the 2nd baby!’