The founding member of the motorcycle club and the ‘Sons of Anarchy’ actor was surrounded by his fourth wife, Zorana, and other loved ones while he passed away.

AceShowbiz -Hells Angels founding member Sonny Barger has died at the age of 83 from liver cancer. Surrounded by his fourth wife, Zorana, and other loved ones, the “Sons of Anarchy” actor passed away on Wednesday, June 29.

“If you are reading this message, you’ll know that I’m gone. I’ve asked that this note be posted immediately after my passing,” the biker, writer and self-styled outlaw himself said in a Facebook post published after his death.

“I’ve lived a long and good life filled with adventure. And I’ve had the privilege to be part of an amazing club,” he went on in the post. “Although I’ve had a public persona for decades, I’ve mostly enjoyed special time with my club brothers, my family, and close friends. Keep your head up high, stay loyal, remain free, and always value honor.” 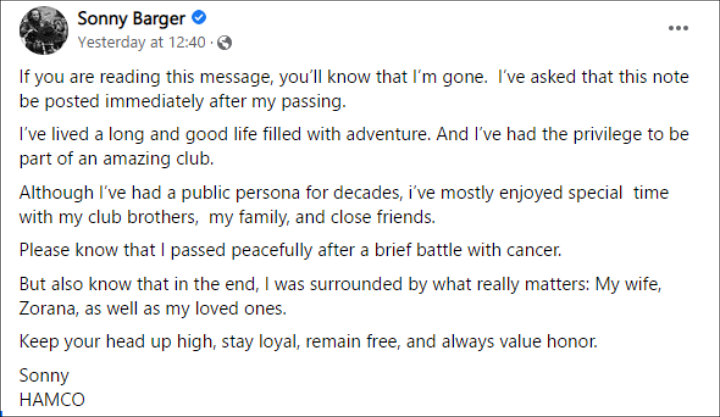 Barger, whose real name was Ralph Hubert Barger, said in his memoir the Hells Angels were merely a small club in San Francisco before he came onboard. He created the Oakland Hells Angels in California, the biker club’s most significant “charter,” and is credited with building it into a globally recognized gang.

Barger defended the group despite it facing accusations from several authorities of being a criminal organization. One of its biggest controversies involved a Rolling Stones fan being fatally stabbed by a member at the band’s free Altamont Concert in 1969.

On Thursday, June 30, Barger’s former lawyer Fritz Clapp confirmed that the actor had died at home with stage four liver cancer. He said, “He’d lived a long life, and he’d been ill for some time. Everybody around him had pretty much been prepared emotionally for it.”

Barger’s run-ins with the law included being acquitted along with three others in 1972 of murdering a Texas drug dealer and setting a home alight. His rap sheet also included arrests for drink driving, assaults with deadly weapons, kidnapping, drug-dealing and racketeering, and he was jailed on drugs charges and for possession of a weapon by a convicted felon.

In the 1980s after years of heavy smoking, Barger was diagnosed with throat cancer, and underwent surgery to have his vocal chords removed. It prompted him to start an anti-smoking campaign under the message, “Want to be a rebel? Don’t smoke as the rest of the world.”

In 2012, Barger, who played Lenny “The Pimp” Janowitz in “Sons of Anarchy”, had surgery for prostate cancer, resulting in the removal of his prostate and he was declared free of cancer until the disease was detected in his liver.