Hoda Kotb shed tears of joy on Monday when she viewed the Emmys from her home and witnessed a historic moment.

The Today show star admitted she was left “sobbing” after Sheryl Lee Ralph’s win for best supporting actress in a comedy series for Abbot Elementary.

She became only the second Black winner in that category for her work on the ABC show.

Hoda recorded the moment airing on TV when Sheryl collected her award and broke into song.

The mom-of-two then shared it on Instagram and captioned the clip: “Sobbing! @thesherylleeralph this is YOUR TIME @abbottelemabc.”

MORE: Hoda Kotb’s decision to spend time with her family over the summer is so relatable

She received a standing ovation for her acceptance speech when she sang the chorus  from Dianne Reeves’ Endangered Species.

“I am an endangered species, but I sing no victims’ songs. I am a woman, I am an artist, and I know where voice belongs,” she sang, leaving the audience shocked and silent.

Hoda’s fans commented on her post, writing: “Best Acceptance Speech Ever,” and, “that’s awesome. Beautiful voice”. Others admitted they too were feeling tearful and wrote: “Crying. As I go to my empowering women meeting,” and, “This was everything!!! Sobbing too! Love her show.”

Abbot Elementary is ABC’s freshman comedy which is an American mockumentary sitcom television series and stars Quinta Brunson as a second grade teacher at a fictional predominantly Black school in Philadelphia. 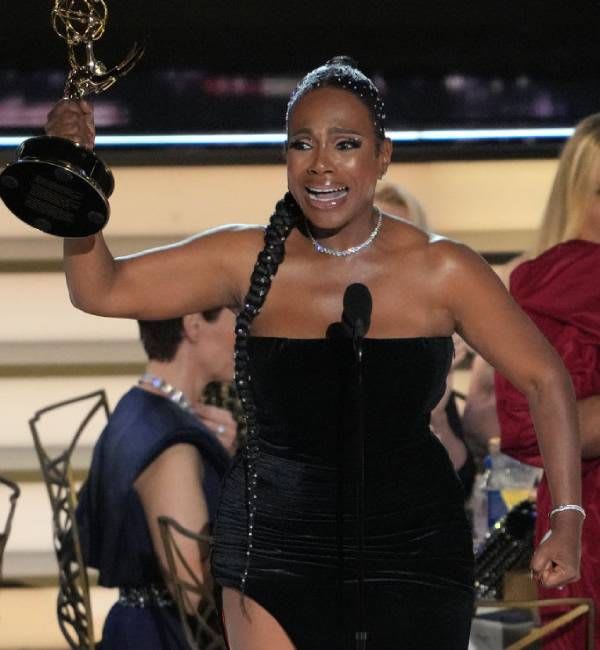 It also won best writing for Quinta and was a huge, but welcomed surprise from the star-studded evening.

Ted Lasso, The White Lotus and Squid Game were the big winners of the 2022 Emmys.

Squid Game also picked up three with star Lee Jung-Jae making history as he became the first actor from a non-English show to win in the best actor in a drama series category.