Kanye West is doing everything he can to deflect attention away from his praising of Hitler, even throwing out false allegations about his ex-wife Kim Kardashian and an affair with NBA superstar Chris Paul … according to sources with direct knowledge.

Before he was kicked off Twitter Thursday night for posting a swastika, the disgraced rapper made a wild allegation claiming he “caught” Kim Kardashian cheating with NBA star Chris Paul. 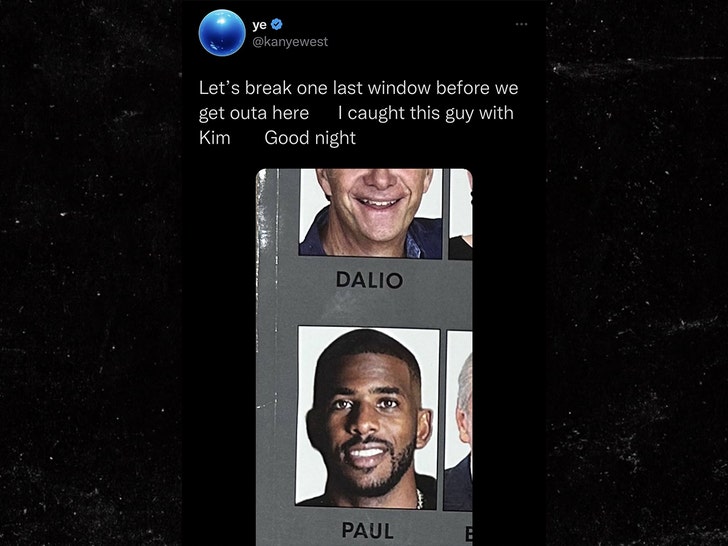 A source close to the situation tells us the allegation is absolutely false, and just another example of a desperate man trying to shift the focus away from his own wrongdoings.

The source says, “This is not true and sadly it’s an ongoing pattern with Kanye — attacking Kim to redirect everyone’s attention after a day of crazy antics where he has said every hateful and offensive thing he can possibly dream of.”

It was Thursday when Kanye was on Alex Jones’ “Infowars” spewing hate, claiming he liked Hitler, questioning the Holocaust and giving the Nazis props. Jones, a controversial figure himself, made several attempts to reel Kanye in, but the rapper only doubled down.

Of course, it was earlier this week when Kim and Kanye finally settled their nearly two-year divorce … he’s agreed to pay her $200k a month in child support, and they’ll have “equal access” to their kids.

Chris Paul has not yet addressed the allegations, but has been married to his wife Jada since 2011, the couple has 2 children.