America’s $639M top secret weapon to defeat Russia and China will be unveiled today: Stealthy B-21 Raider is ‘invisible’ to enemy radar, uses AI to connect to friendly forces, has ‘digital bomb bay’ – and pilots will be ‘optional’

The US Air Force is set to unveil its secret stealth bomber, the B-21 Raider, a $639 million nuclear-capable jet able to sneak past Russian and Chinese sensors.

The advance bomber will be presented on Friday at 4:30pm PT in Palmdale, California, north of Los Angeles, and will enable the Air Force ‘penetrate the toughest defenses for precision strikes anywhere in the world.’

Built by aerospace and defense company Northrop Grumman, the B-21 Raider will be ‘invisible’ to enemy radar, capable of using Artificial Intelligence to connect to ally forces, feature ‘digital bomb bay,’ and eventually include an option to be completely remote.

The B-21, which will cost $639 million per plane, is the first new US bomber in more than thirty years and will gradually replace the B-1 and B-2 aircrafts that first flew during the Cold War.

Currently, six bombers are being built in Palmdale, which are expected to take flight in 2023. 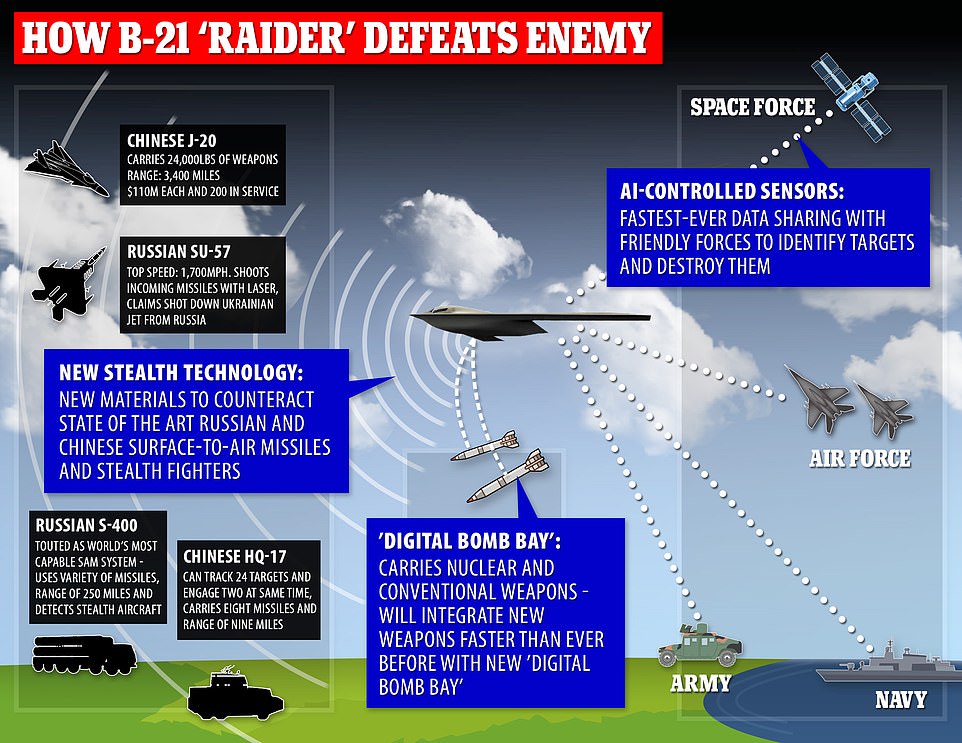 The US Air Force will finally unveil its secret B-21 stealth bomber aircraft on Friday in Palmdale, California, which is touted to be virtually ‘invisible’ to all enemy stealth radars and will included the latest features in military tech 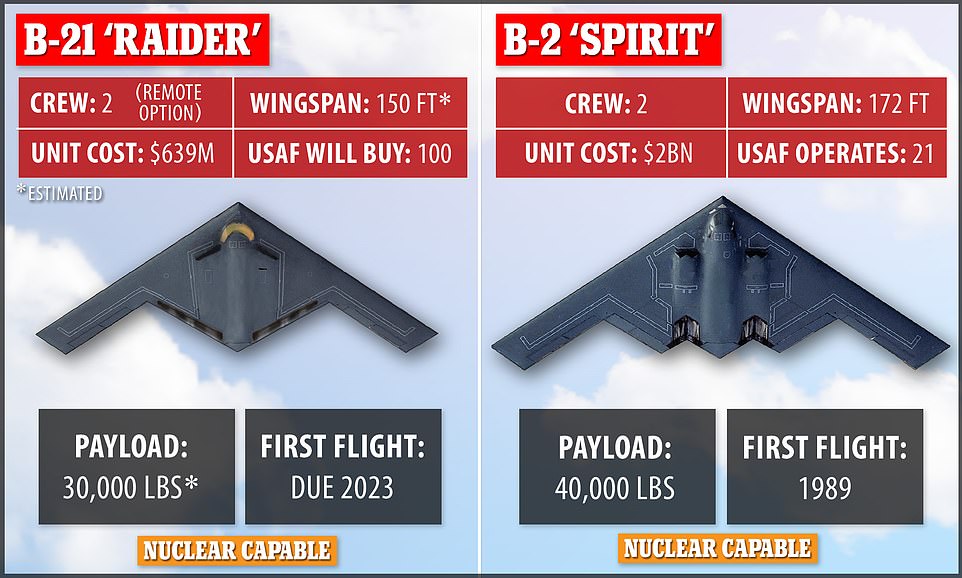 The B-21 Raider is set to replace the $2bn per plane B-2 Spirit – and features a smaller wingspan and price tag of $639m. Unlike its predecessor, the B-21 will be able to go on unmanned bomber and surveillance missions anywhere in the world

The Air Force and Northrop began developing the bomber in 2015 after company won the contract to design and produce the aircraft.

The B-21 will be the backbone of the future of the Air Force, and will be nuclear capable, able to be used for long-range strikes, surveillance and reconnaissance and electronic attacks.

The Air Force plans to purchase at least 100 of the new stealth bombers.

The B-21’s features groundbreaking stealth technology built on top of more than three decades and six generations of US bomber innovation.

The bomber’s stealth tech is expected to counteract even the latest Russian and Chinese surface-to-air missiles, something ’90 percent of the nation’s current bomber fleet is incapable of doing,’ the company said.

The B-21 will also include a ‘digital bomb bay’, which will allow the aircraft to integrate new weapons faster than ever before. It ensures that the bomber can be readily and affordably upgraded.

The new system grants the aircraft the ability to be nuclear-capable and carry an estimated payload of 30,000 pounds of firepower.

Additionally, the B-21 will come with AI-controlled sensors, which Northrop said would be able to identify enemy targets and share intelligence with allies for coordinated strikes in record time.

The system will be able to share data with the Army, Navy, Air Force and Space Force.

‘The B-21 provides utility to accomplish our nation’s security objective in every scenario imaginable,’ retired Air Force Lt. Gen. David Deptula told the Wall Street Journal. ‘No other weapons system can do that.’

‘The B-21 is America’s China-deterrence bomber,’ said Mark Gunzinger, a retired bomber pilot who flew the B-52. 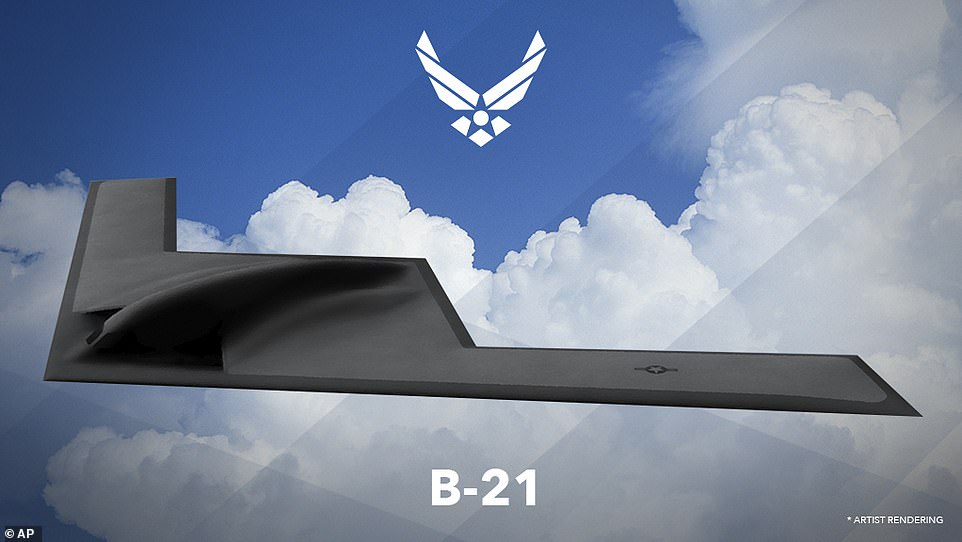 Unlike its predecessor, the B-2 Spirit, the B-21 Raider is expected to allow for unmanned missions.

While the current plans for the Raider include a crew of two, the Air Force has said that future aircraft must be able to be completely remote.

Representatives for Northrop called the B-21 ‘pioneering’ and ‘technological excellence.’

‘The B-21 is the most advanced military aircraft ever built and is a product of pioneering innovation and technological excellence,’ said Northrop sector vice president and general manager Dough Young. 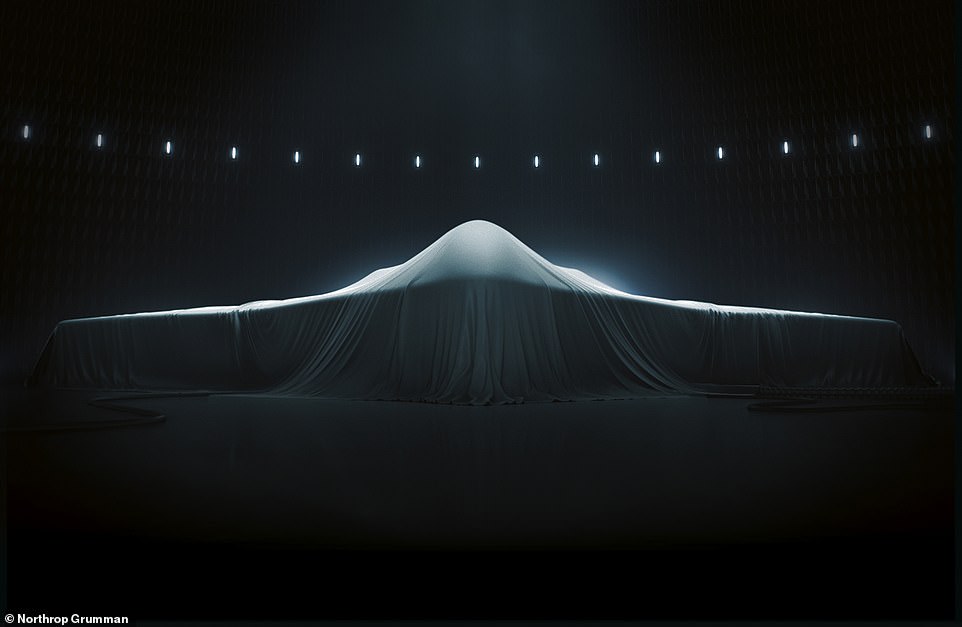 HOW DOES IT COMPETE WITH RUSSIA AND CHINA?

The stealth aspect of the B-21 Raider is touted as its main asset against Russian and Chinese forces.

Like its predecessor, the B-21 is expected to be a subsonic aircraft, meaning it will fly slower than 768 mph.

That puts it at a notable disadvantage against China’s J-20 stealth fighter, which flies at more than 1,300 mph and is capable of carrying 24,000 pounds of payload.

The B-21 will also be slower than Russia’s SU-57, which can hit a top speed of 1,330 mph and reportedly saw its first operational use in November when officials claimed it downed a Ukrainian jet.

Despite the slow speed, Northup claims the B-21 will be among the most undetectable aircrafts in the sky, capable of hiding from foreign nation’s radar system.

Russia currently touts the most capable surface-to-air missile (SAM) system, which can shoot down stealth aircrafts from 250 miles away.

China currently employs is HQ-17 SAM system, which can track 24 different targets and shot two down at the same time from nine miles away.

Although there have been rumors that China has developed a new radar capable of detecting any and all stealth aircrafts, they have been rejected by military experts.

The Department of Defense has said that a new generation of stealth bombers are needed for America’s national security imperative, which includes deterring conflicts in the South China Sea. 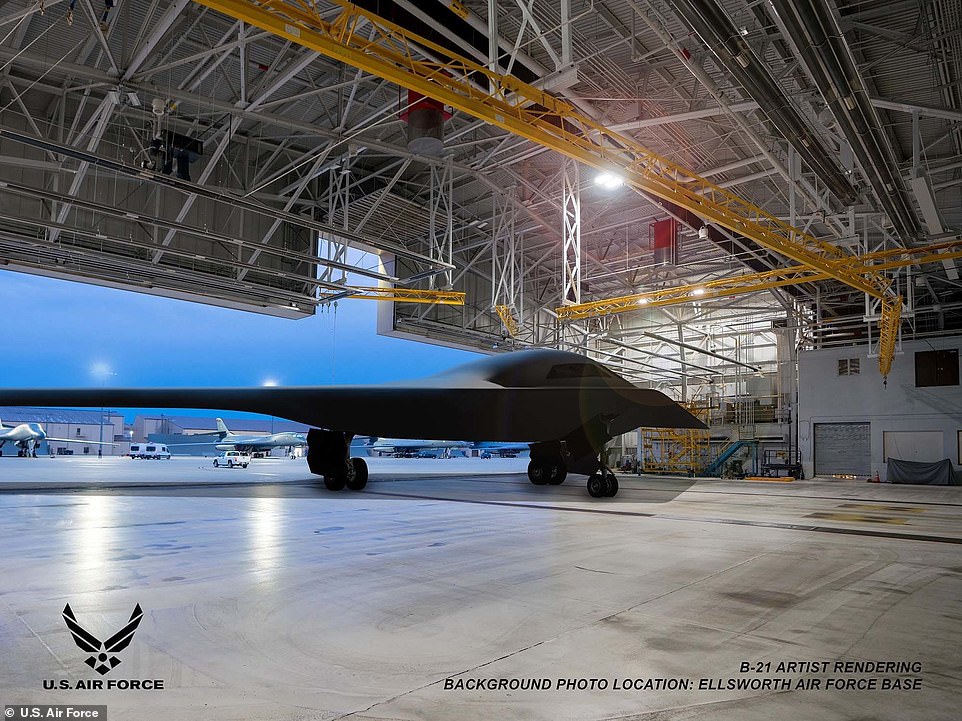 The Air Force is planning to buy at least 100 of the B-21 Raider. Pictured: A rendering of jet released by the US Air Force