Lindsay Lohan is MARRIED! Mean Girls star secretly ties the knot with beau Bader Shammas as she gushes: ‘I am the luckiest woman in the world’

Lindsay Lohan has secretly wed her beau Bader Shammas after calling him her ‘husband’ in a gushing Instagram post on Saturday.

The 36-year-old New York-born actress first announced her engagement to Bader, 35, in November last year, after first being linked in 2020.

It now seems as though they have tied the knot as the Mean Girls star told her 10.9million followers: I am the luckiest woman in the world. You found me and knew that I wanted to find happiness and grace, all at the same time.’

She added: ‘I am stunned that you are my husband. My life and my everything. every woman should feel like this everyday.’ 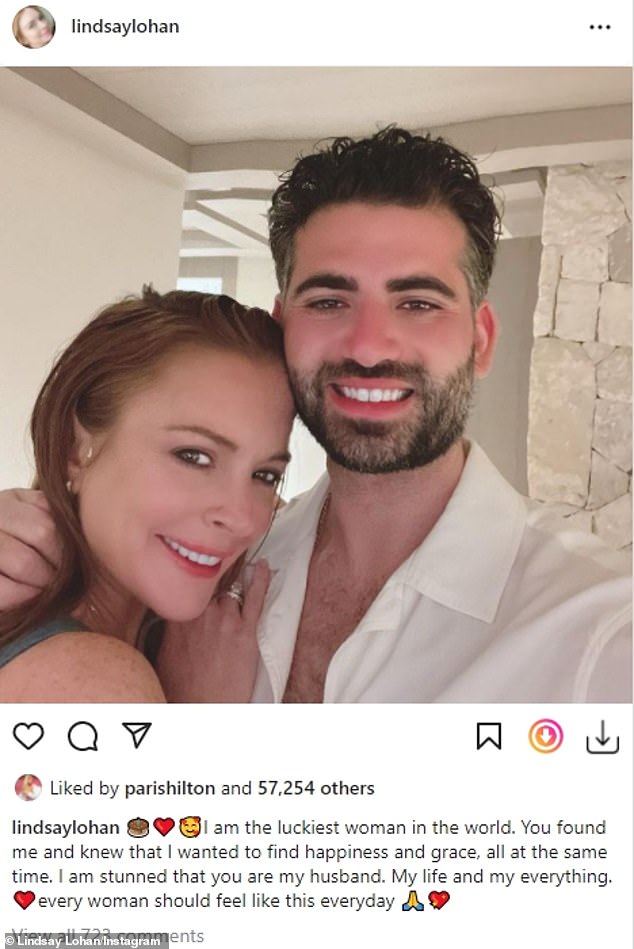 Lindsay Lohan claims she’s MARRIED beau Bader Shammas as she calls him her ‘husband’ and gushes: ‘I am the luckiest woman in the world’

However, there was no sign of a wedding dress in the photo, as it appeared as though Lindsay was wearing a casual grey top while Bader was seen wearing an open white shirt.

The couple are based in Dubai where the actress now lives, and are relatively private aside from a few Instagram posts from the star about their relationship.

In her engagement post last year, Lindsay captioned a loved-up snap of the pair: ‘My love. My life. My family. My future.’

Bader and Lindsay have been linked since they were spotted together at a music festival in Dubai shortly before the pandemic hit in 2020.

They have kept their romance out of the public eye.

In May 2020 the star’s mother Dina spoke of Bader, saying: ‘Lindsay is dating a wonderful guy right now,’ she said. ‘But that’s neither here nor there. When she’s ready to talk about her personal life, (she will).’

It was claimed last year that Lindsay was smitten with Bader

A source told The Sun: ‘Lindsay’s relationship with Bader (Shammas) is going strong. She has been with him for about two years now.

Bader is a steady and stable presence in her life, the source added. He is a legitimate guy. He’s not an actor, he’s not in the entertainment industry, he manages funds for high net worth people at Credit Suisse.’

Lindsay was previously engaged to Egor Tarabasov but the pair split in 2016 after they were pictured grappling over a mobile phone on a beach.

During a Russian television interview that year, the actress claimed she even paid for her own ring when the pair got engaged in September 2015.

She also claimed that during their well-publicised rows Egor beat her and alleged that she covered up the bruises.

Tarabasov denied the ‘harmful’ and ‘false’ claims and no charges have been brought against him.

Meanwhile, Lindsay has been ramping up her professional career lately – launching a comeback after getting back on her feet.

The actress has signed a two-film deal with Netflix and is set to star in the upcoming romantic comedy, Falling for Christmas.

She’s also recently narrated the Amazon Prime Video reality dating show, Lovestruck High, and appeared as a judge on the Australian edition of The Masked Singer.

Lindsay launched her own podcast called The Lohdown with Lindsay Lohan this, which has seen her interview celebrity guests including the band Salt-N-Pepa.

Before that, the short-lived series Sick Note (2017-2018), starring Rupert Grint, was her most notable acting project in the last several years. However, the Mean Girls star served as a judge for Australia’s version of The Masked Singer for several seasons. 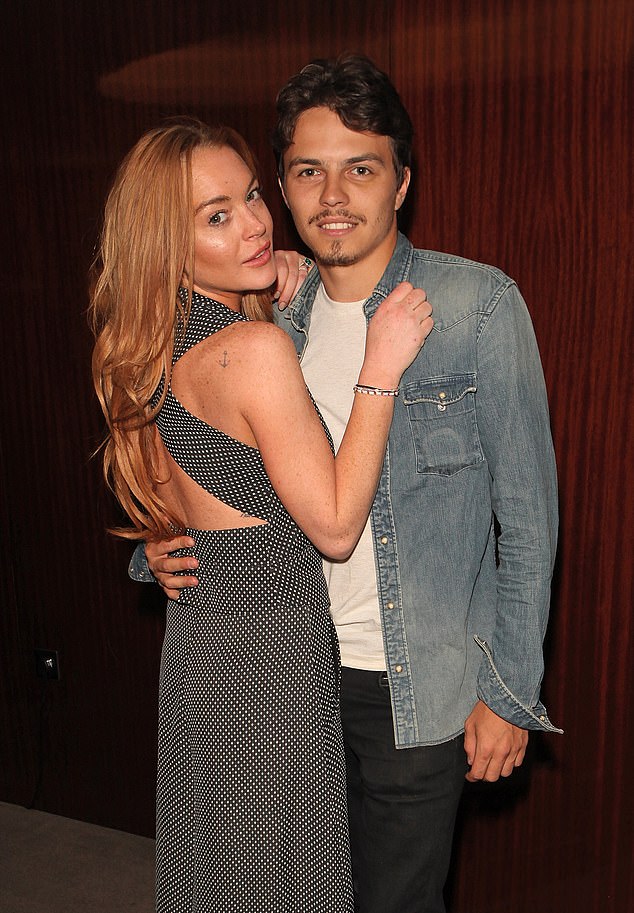 Over: Lindsay was previously engaged to Egor Tarabasov but the pair split in 2016 after they were pictured grappling over a mobile phone on a beach (pictured 2016) 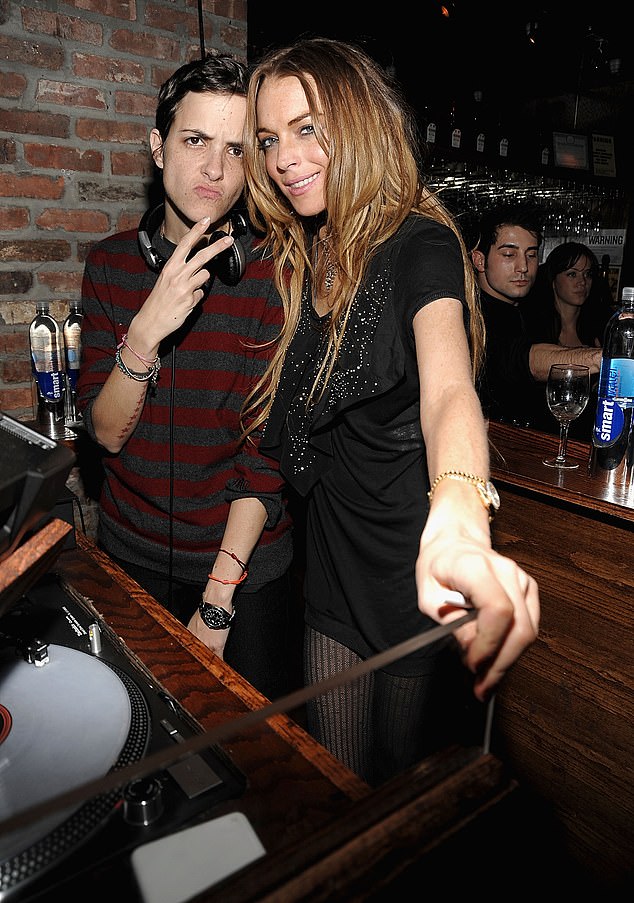 Back then: Lindsay previously dated DJ Samantha Ronson back in 2009 (pictured) 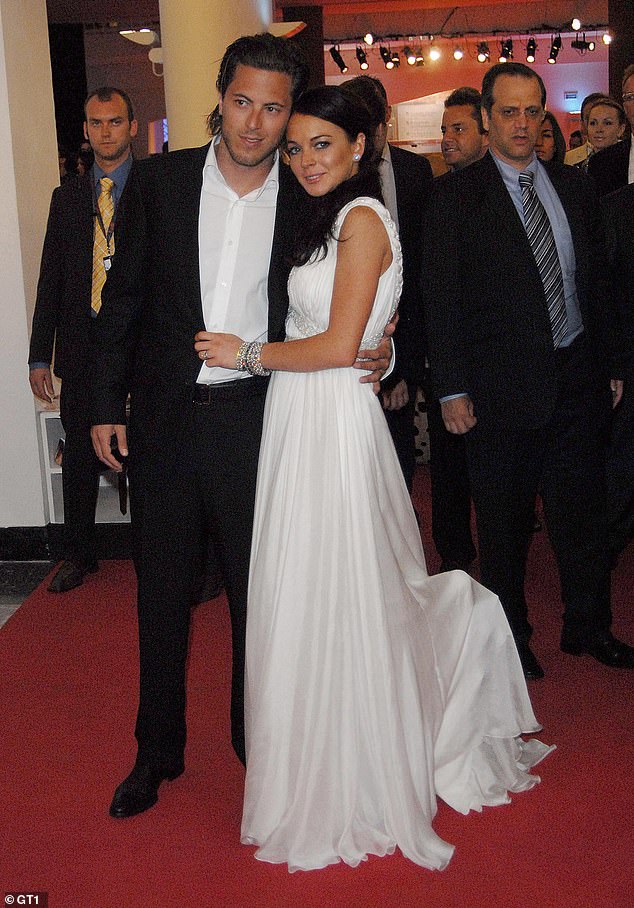 Back then: Lindsay dated Harry Morton back in 2006 (pictured) 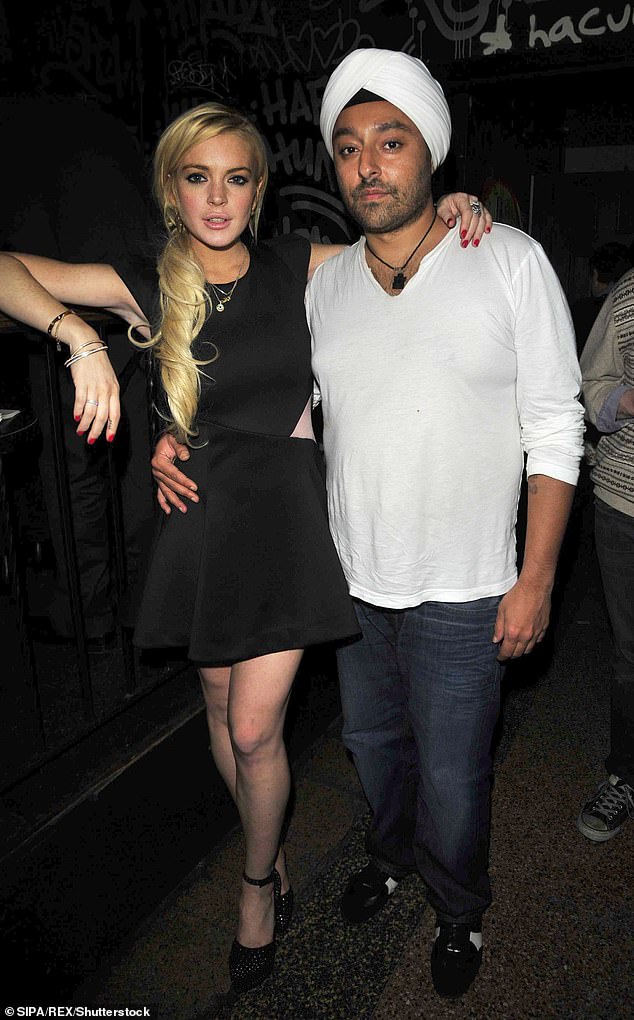 She had also opened a luxury VIP beach club on the Greek island of Mykonos in 2018 dubbed the Lohan Beach House.

As well new acting projects, it seems Lindsay has been making a killing with new sponsorship deals.

Last week, she brought on plenty of nostalgia as she made numerous references to her iconic 2004 movie Mean Girls, in her latest All Birds shoe commercial.

‘I didn’t run track in high school – I was more of a mathlete,’ the actress, 35, said in the in commercial, referring to her leading role as Cady Heron – a high school student who belonged to the math club.

The star also poked fun of the pronunciation of her name, as she described the shoes as being, ‘Perfect for a Queen Bee like Lindsay Lohan… or is it Lindsay Lohan?’ 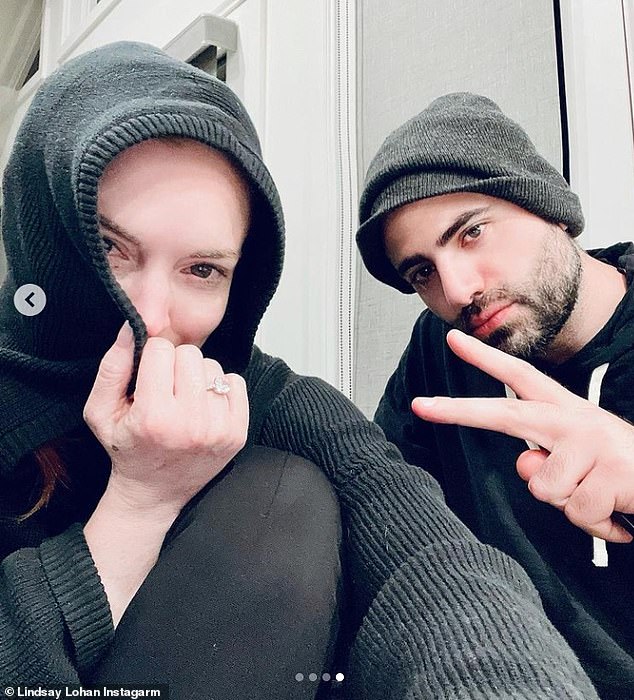 Romance: The couple looked delighted as they showed off the new engagement ring 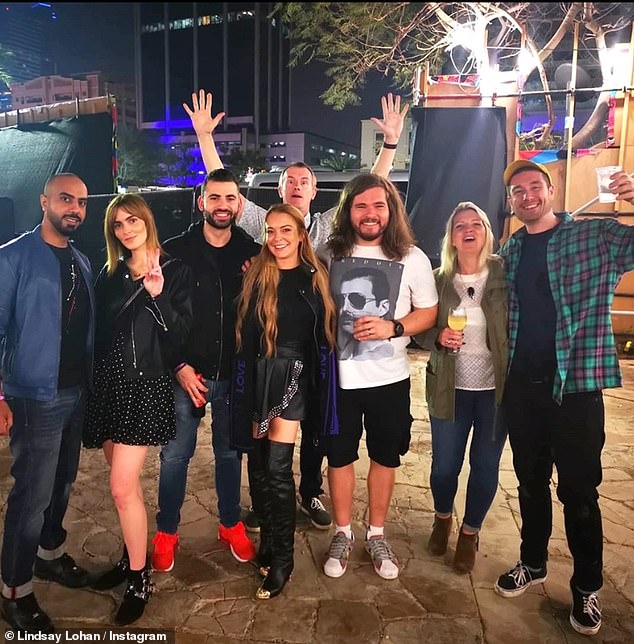 Couple: Lindsay and Bader (third left) are pictured together in Dubai

‘I get it, as a running spokesperson, I guess I’m a little unexpected,’ the beauty added while promoting the brand’s latest ‘Tree Flyer’ shoe.

‘Together with @allbirds, I’ve gone from mathlete to unexpected athlete. All thanks to their Tree Flyer (the pink ones, of course), which is made with natural materials, instead of, you know…plastics,’ she wrote cheekily in the caption.

In yet another cute reference the star picked out a pair of pink sneakers and said, ‘Well, it is Wednesday’ in reference to the famous line ‘On Wednesdays, we wear pink’ from the film.

Continuing on with the fun allusions, she described the eco-friendly sneakers, saying: ‘These don’t just look cute, they’re made with natural materials. Always avoid the plastics.’

The plastics being the popular mean girl group that of the North Shore High School and the main antagonists of Mean Girls.

Lohan starred in the teen comedy film Mean Girls, directed by Mark Waters and written by Tina Fey, in 2004.