‘You had one job!’ Paula Patton, 46, is roasted by Zendaya fans for mispronouncing Euphoria star’s name as ‘ZenDIEya’ at BET awards – months after being trolled for her bizarre fried chicken recipe

Paula Patton is being mercilessly mocked online after mispronouncing Zendaya’s name during the 22nd annual BET Awards on Sunday – just weeks after landing herself a spot in the viral hall of fame with a bizarre fried chicken recipe.

The 46-year-old was on hand to present the award for Best Actress at the star-studded event when she caught the attention of viewers while announcing Zendaya’s win.

While the Euphoria actress, 25, pronounces her name as Zen-Day-Ah, Patton was heard saying, ‘Zen-Die-Ah’ before attempting to correct her mistake moments later. 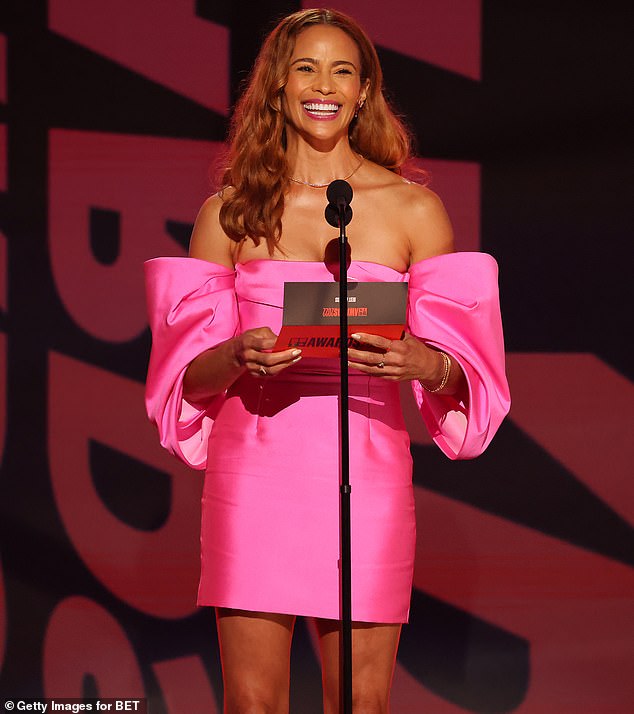 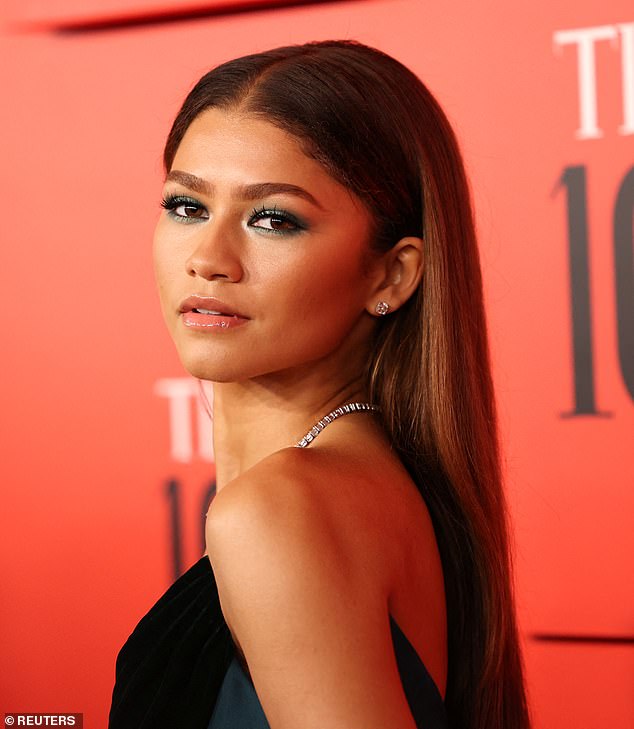 Household name: Patton was on hand to reveal that Zendaya has been crowned Best Actress at the annual event on Sunday night 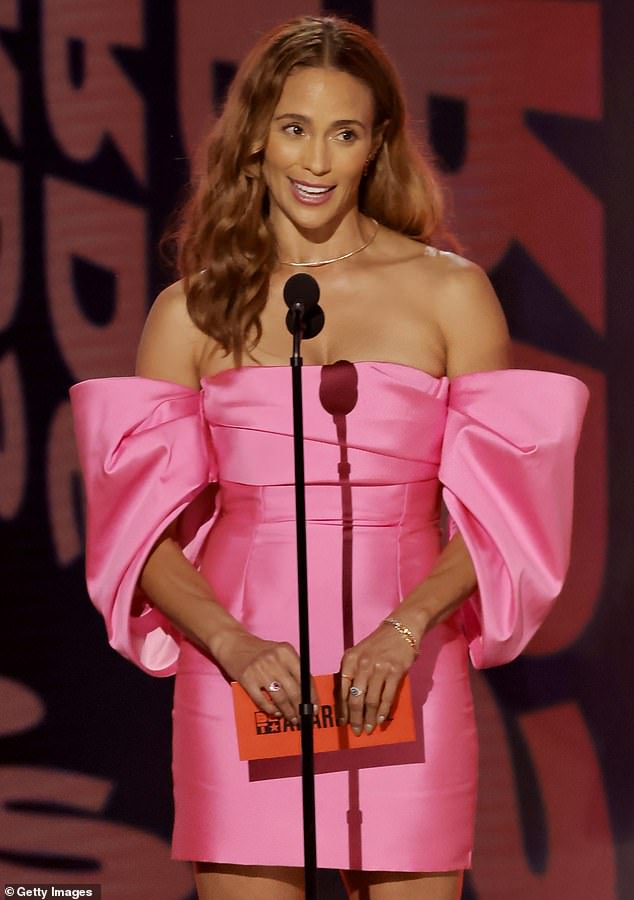 Oops: Patton was heard saying ‘Zen-Die-Ah’ instead of Zen-Day-Ah while presenting onstage

This immediately prompted a response from viewers as many took to Twitter to share their confusion about the mishap.

Another added: ‘Zendaya has been famous for how long now and Paula Patton still can’t pronounce her name?’

One fan teased: ‘Paula Patton you had ONE JOBBBBB McLyte already pronounced her name mama how you get that wrong?’

Another added: ‘Zen-Die-aH?! Paula Patton has been away from the culture for so long she can’t even pronounce our names…’

‘Why did Paula Patton just pronounce Zendaya’s name as if she doesn’t know who she is… her acting career is bigger than Paula’s and Zendaya is half her age,’ one fan mused.

One Twitter user wrote: ‘Paula Patton mentioned the importance of learning lines while presenting the award for actresses & then proceed to mispronounce Zendaya & fumble the rest of her lines.’

Another joked: ‘First Paula Patton can’t fry chicken and now she messed up Zendaya’s name she has made a permanent enemy outta me’.

Meanwhile, others asked fellow fans to take it easy on the star over the mistake as one wrote: ‘Paula Patton mispronounced Zendaya’s name the same way you’re going to pronounce the L in salmon when you read it. Lay of that lady.’ 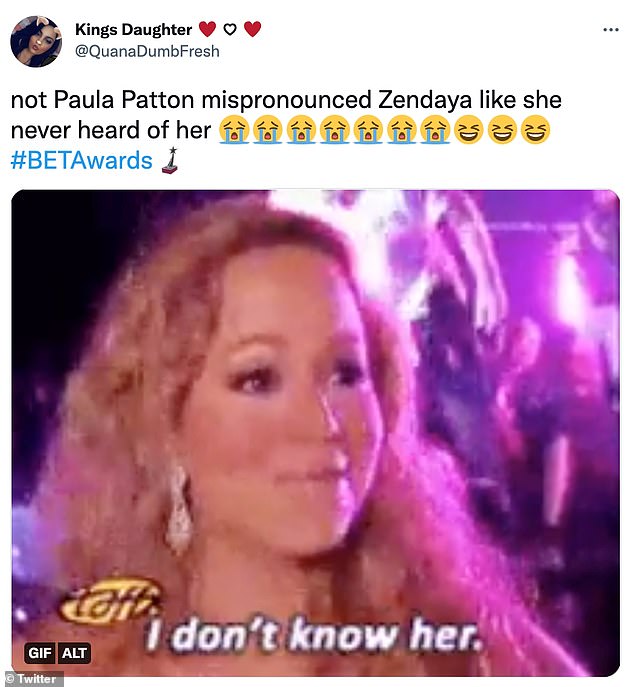 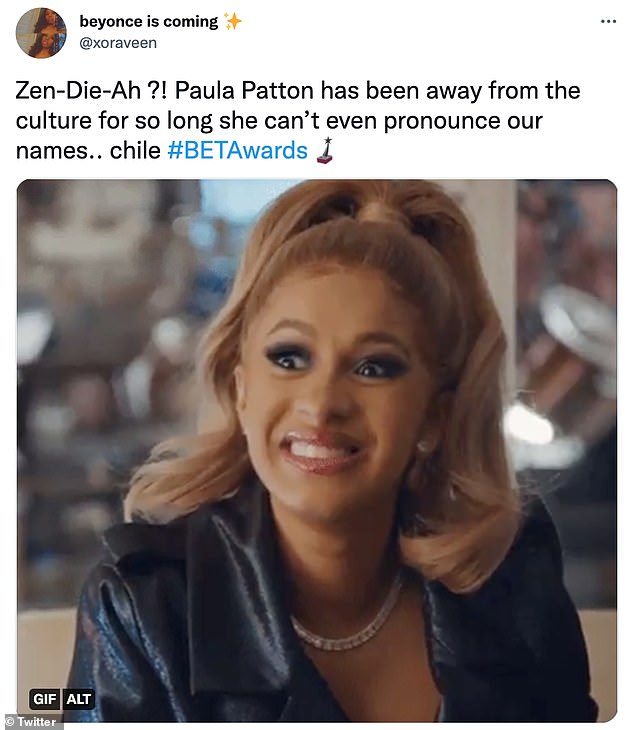 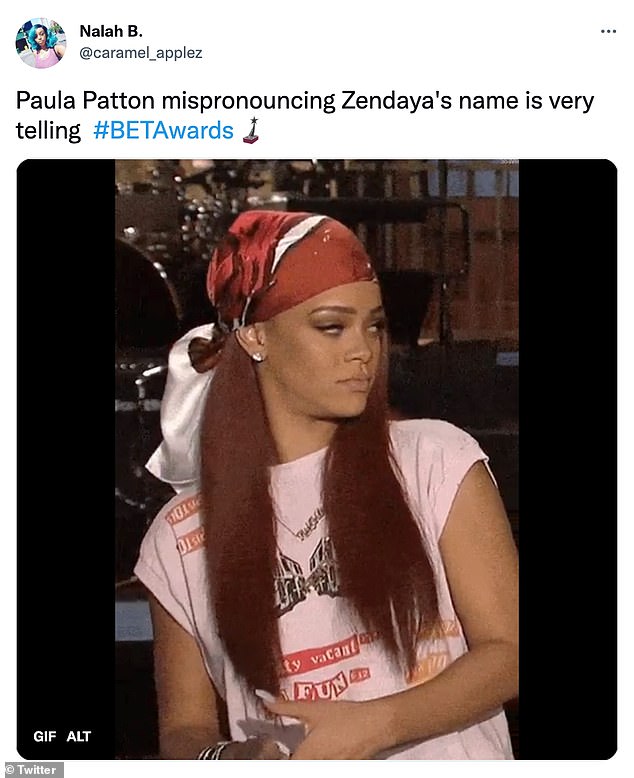 Unexpected: Fans couldn’t believe the star made the mistake

Another stated: ‘NGL [not gonna lie] I been saying it just like Paula Patton this entire time.’

‘At this point is anyone really surprised by anything Paula Patton says or does She can’t help herself, so let’s just all take a moment to say ‘bless her heart’ and give her a hug,’ another added. ‘It really isn’t that deep #BeKind’.

Patton appeared to be flustered by her mishap as she accepted the award for Zendaya as she stated: ‘She couldn’t be here tonight so we are happy to accept the award on her behalf.’

The slip up comes just months after the 2 Guns actress had been forced to speak out following backlash over her chicken frying skills.

Be Kind: However, other fans asked for social media users to take it easy on the Just Wright star 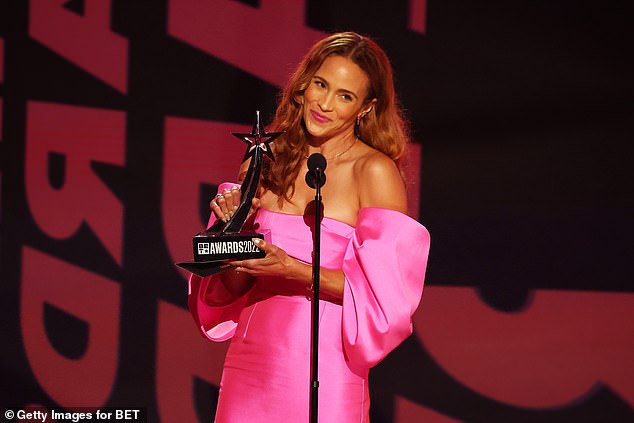 My bad: Patton appeared to be flustered by her mishap as she accepted the award for the Dune star

In March, the Deja Vu actress had posted an Instagram video of her mother’s ‘famous fried chicken’ recipe, which involved rinsing the chicken under cold water, coating it in flour, and seasoning the chicken as it fried in avocado oil.

About a month later, the clip went viral on social media, after Olympic track star Ashley Spencer reposted the video to TikTok along with some critical commentary about Patton’s frying technique.

Spencer specifically questioned the Warcraft star’s methods when she placed the flour-coated chicken pieces into hot oil and then added the seasoning.

After learning about the mounting backlash on social media, Patton took back to her Instagram page to respond. 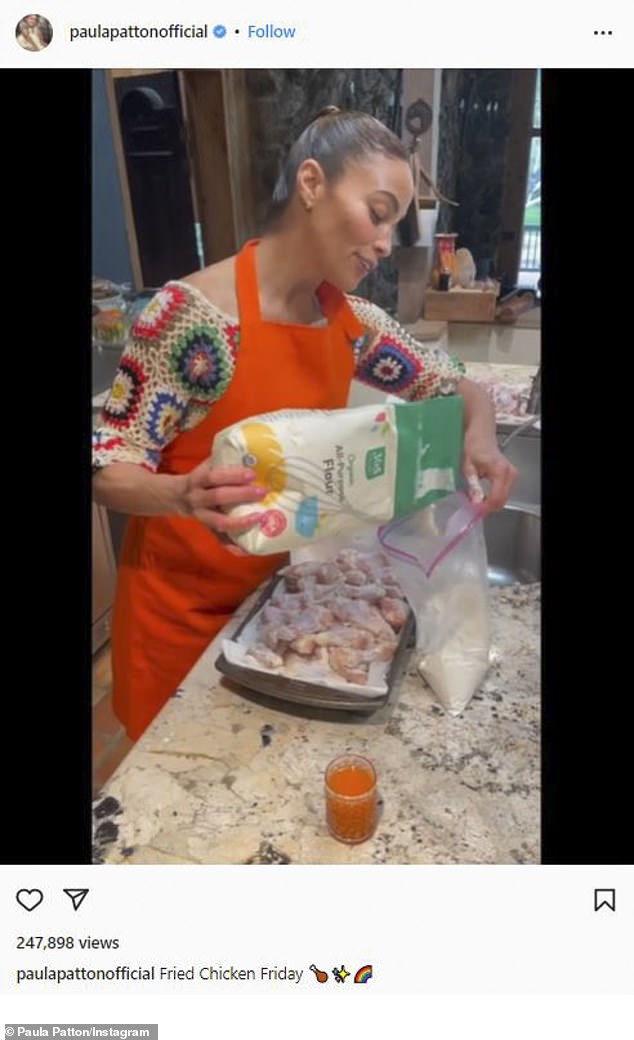 Hot topic: Patton previously made  headlines in March after she  posted a video of herself making her mother’s fiend chicken recipe on Instagram 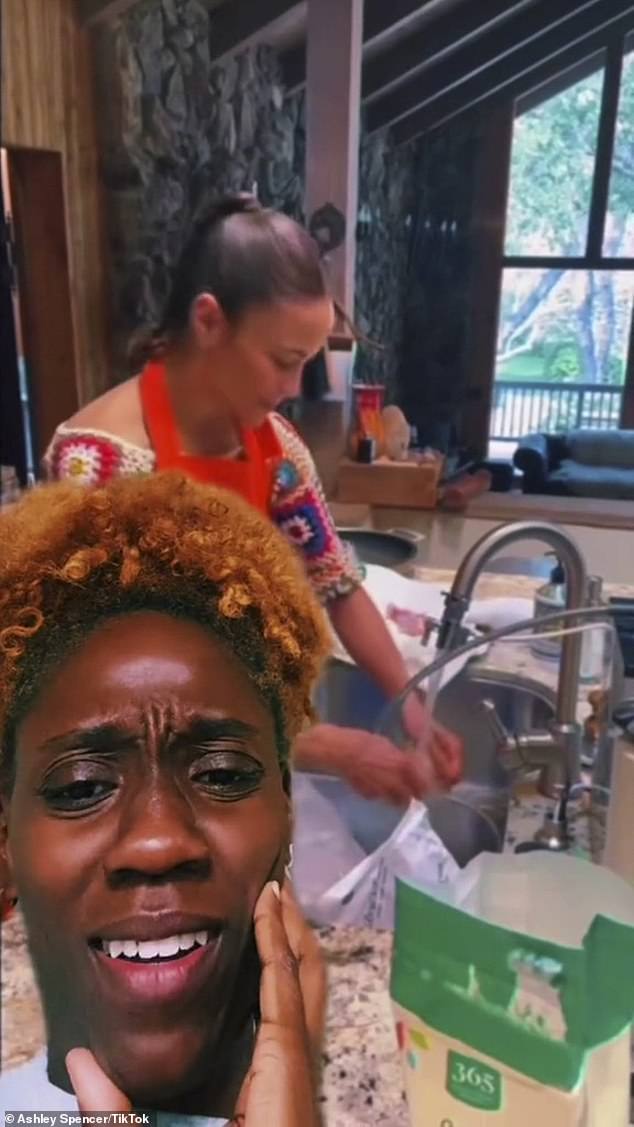 Commentary: Olympic track star Ashley Spencer, 28, was among the people who criticized Patton’s fried chicken skills, which began with a critique of how well she cleaned the meat 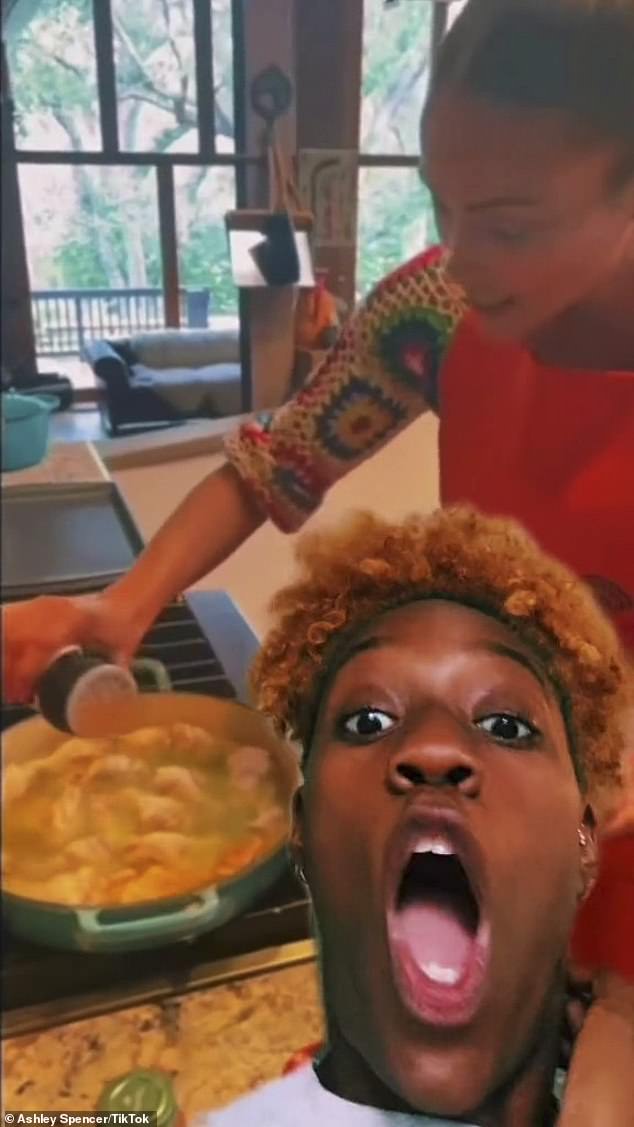 The timing questioned: Spencer also questioned Patton’s methods when she placed the flour-coated chicken pieces into hot oil and then added the seasoning

‘I’m in Mexico with my son and I woke up and people were like, “Did you see on Instagram and TikTok and Twitter they’re talking about the way you fry chicken?” And I was like, “Oh no, what!”‘

Seemingly taking it all in stride, Patton flashed a big beaming smile and added, ‘That’s okay I just wanted to respond and say listen, I get it, it might look crazy, it is the way we do it. My mom taught me it, it’s my mom’s recipe.’

She went on to explain that she had thoroughly washed her chicken, even if the edited video made it look otherwise. 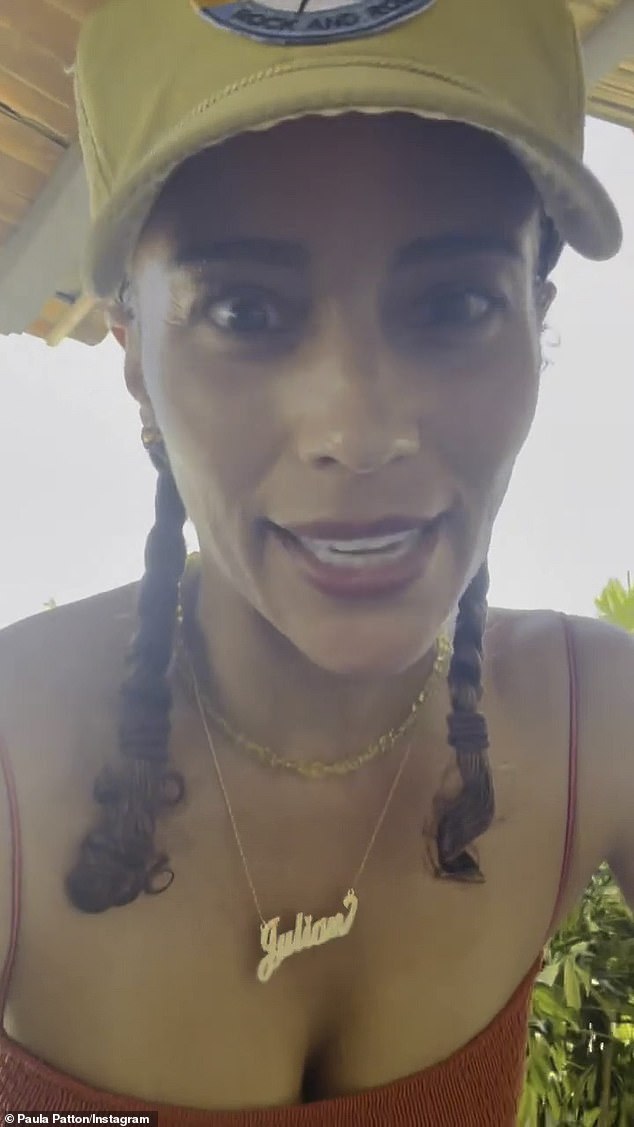 Taking it in stride: Patton responded, ‘I just wanted to respond and say listen, I get it, it might look crazy, it is the way we do it. My mom taught me it, it’s my mom’s recipe’ 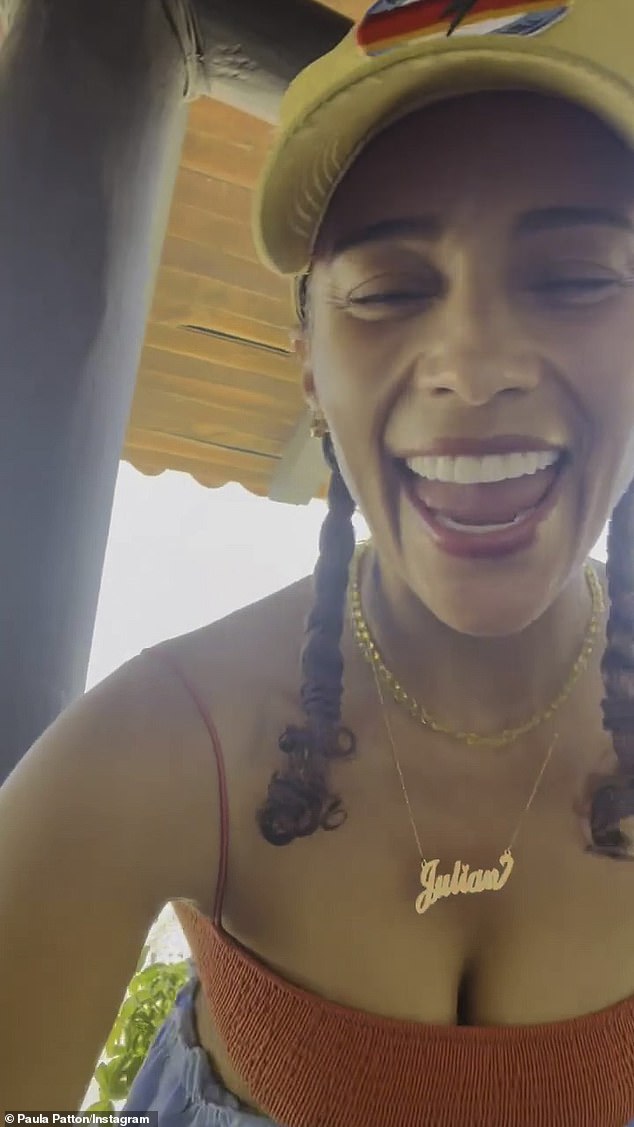 ‘I just wanted to send everybody love, and I appreciate the comments, the room for improvement, and to know that this is an old family recipe; that’s how we do it.’ 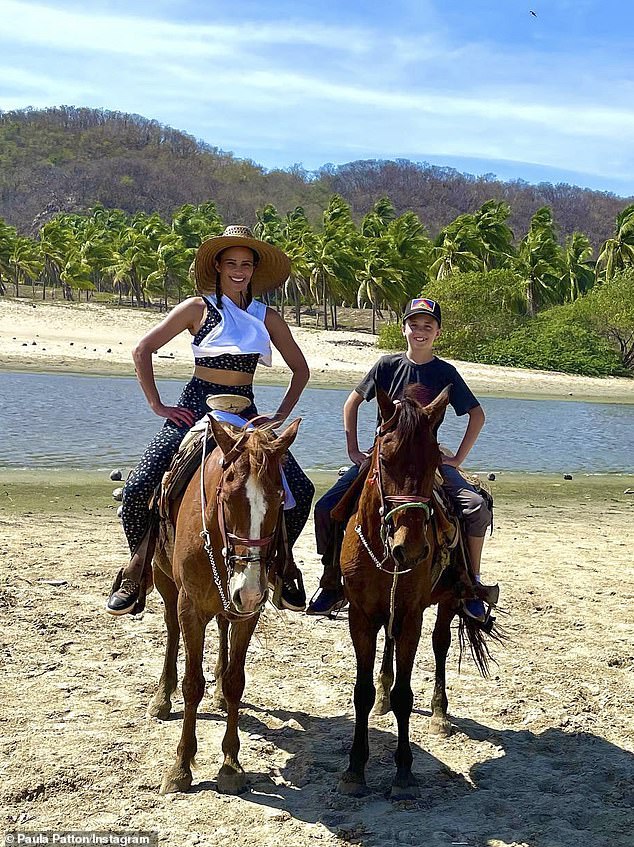 Family time: Patton shared the response video with vacationing with her son Julian — whom she shares with ex-husband Robin Thicke — in Mexico

‘It’s all good because everybody’s got their own way of making things. And I’ll take suggestions, I’ll make a new kind of fried chicken, but I’m gonna always make my mom’s chicken the way she did it. We put the seasoning in the oil and all that. It’s just the way we do it,’ she concluded.

‘I just wanted to send everybody love, and I appreciate the comments, the room for improvement, and to know that this is an old family recipe; that’s how we do it.’

She also revealed that she made the entire batch of fried chicken for her son Julian — whom she shares with her ex-husband Robin Thicke — and his school mates in Los Angeles.