On their best behaviour! Princess Charlotte, 7, and Princes George, 9, and Louis, 4, politely shake hands with their headmaster as they arrive at Lambrook School

The Duke and Duchess of Cambridge dropped their children Prince George, nine, Princess Charlotte, seven, and Prince Louis, four, at their new school today – and the youngsters appeared to be on their best behaviour.

Arriving at Lambrook School near Ascot in Berkshire, alongside their parents Prince William and Kate Middleton, both 40, the young royals were very polite and shook hands with Headmaster Jonathan Perry ahead of entering the building.

The children looked adorable in their navy and white school uniforms and they respectfully greeted their headmaster.

The royal children were today attending a ‘settling in afternoon’ – an annual event to welcome new starters and their families to the school on the day before the new school term begins.

They will officially start at the school tomorrow, after the Cambridges set up a new home at Adelaide Cottage in Windsor’s Home Park. 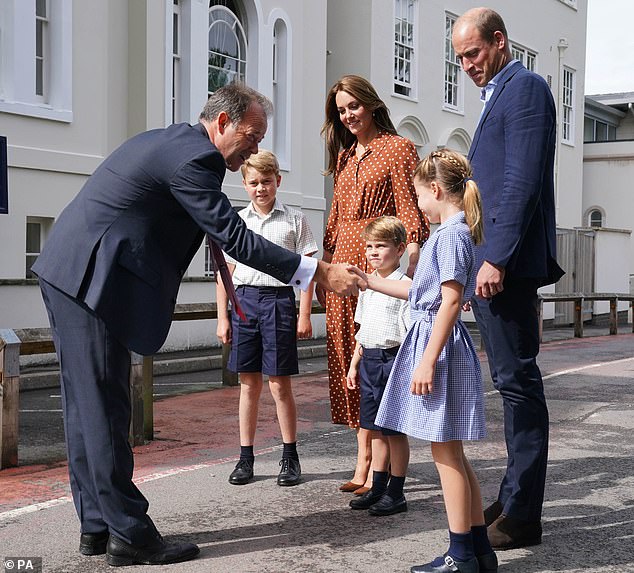 Prince George, nine, Princess Charlotte, seven and Prince Louis, four, were very polite and shook hands with Headmaster Jonathan Perry as they arrived for a settling in afternoon at their new school Lambrook 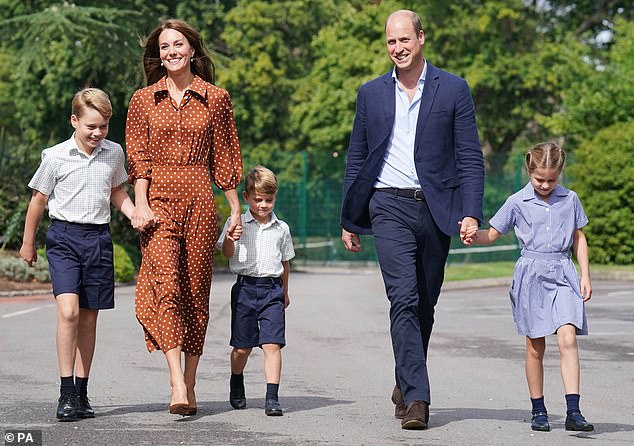 In photographs released of the family arriving, the Cambridge siblings looked confident and happy as they arrived ready for a 90-minute settling-in session.

The Duchess of Cambridge was the picture of elegance in a £245 brown polka dot dress by trendy cult brand Rixo for the occasion, which she paired with matching tan coloured heels.

She wore her soft brown locks in her signature bouncy blow dry style, and kept her makeup and jewellery neutral for the occasion.

The mother-of-three beamed widely as she walked hand-in-hand with Prince George and Prince Louis, both of whom were dressed in the school’s summer uniform, up the drive.

Meanwhile Prince William appeared in equally happy spirits, and could be seen walking with his daughter Princess Charlotte, who was dressed in a blue and white checked summer dress for the outing. 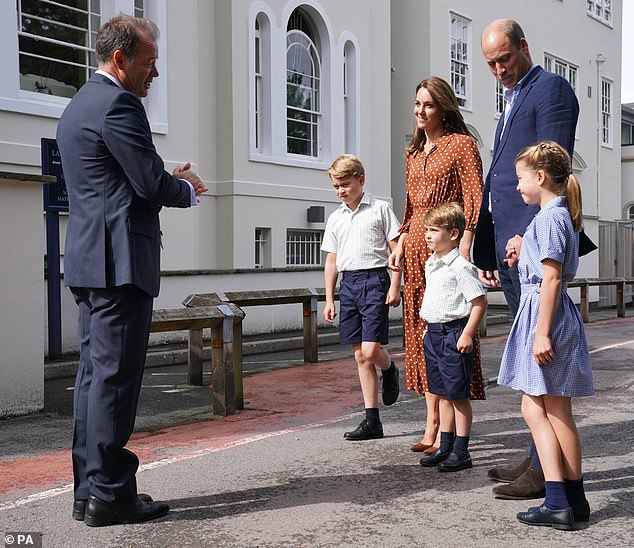 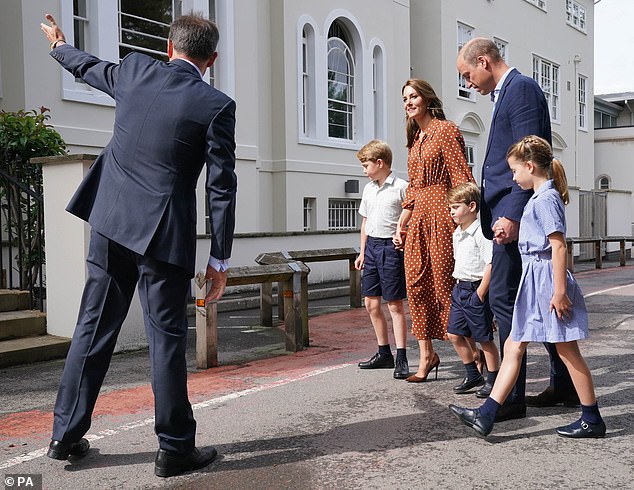 In photographs released of the family arriving, the Cambridge siblings looked confident and happy as they arrived ready for a 90-minute settling-in session

William called his children ‘all the gang’ as he ushered them up the steps of the large white 19th-century country mansion, while Prince George, Charlotte and Louis all said they are ‘excited’ to starting.

The Duke and Duchess are beginning a new life in the country away from the goldfish bowl of their official London residence Kensington Palace which is being seen as a bid to put their children first and give them more freedom.

William and Kate had been known to have set their heart on outdoorsy prep school Lambrook, with its 52 acres of grounds, where fees will cost the couple in excess of £50,000 a year in total for their three youngsters. 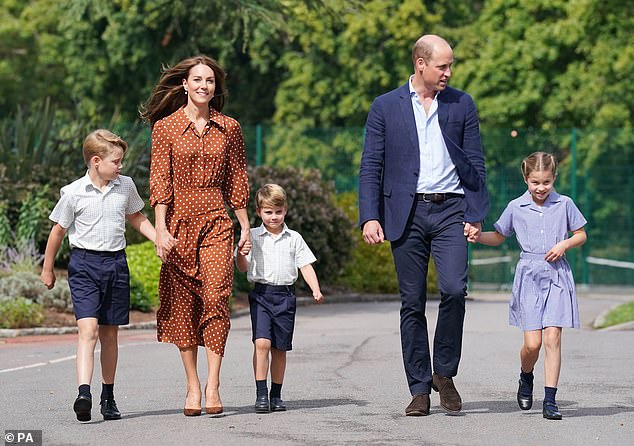 The mother-of-three beamed widely as she walked hand-in-hand with Prince George and Prince Louis, both of whom were dressed in the school’s summer uniform, up the drive

William drove his family the 20-minute journey, no doubt relishing his first experience of the shorter school run after the daily trek from west to south London to George and Charlotte’s old school, Thomas’s Battersea.

After parking, the family of five managed the walk to the school during a gap in the rain, which later became torrential as other parents arrived.

Conscious of his youngest son’s very first day, William was seen stroking Louis’ hair reassuringly as they moved into sight of the entrance.

A source said the Cambridge children were particularly excited to all be going to the same school for the first time.

‘They’re really excited about starting a new school together, and I think mum and dad are too,’ they said.

Fresh air and freedom for George, Charlotte and Louis at ‘magical’ school

Set in 52 acres of idyllic Berkshire countryside, Lambrook School gives its pupils ‘feathers to fly’ and a ‘delicious sense of freedom’.

Its new royal charges, Prince George, Princess Charlotte and Prince Louis, will enjoy a nurturing education at the wholesome, co-educational independent day and boarding school for three to 13-year-olds near Ascot, just a 10-minute drive from their new home in Windsor.

The Good Schools Guide describes it as a ‘classic prep school’ with a ‘heart of gold’, and tells of how youngsters get to ‘run and run’ in the vast grounds with ‘total freedom to explore, provided you’ve got your wellies on’. Lambrook boasts of ‘first-class teaching and superb facilities’ which include a 25-metre swimming pool, a nine-hole golf course, an astroturf, hard courts, a squash court, cricket and other sports pitches.

It has a Diamond Jubilee performing arts studio, dance studio and sports hall, and a new £6 million Queen’s Building for ICT and academic learning. The prospectus quoted one parent as saying: ‘It’s the most magical place for our children to spend time, and they can often be seen rosy-cheeked and perfecting handstands, throwing balls or racing to the tree stumps.’

There is school on Saturday mornings followed by an afternoon of sports fixtures for pupils in Year 5 and above which includes nine-year-old George.

‘Weeknights sound like a hoot; think Harry Potter evenings and lashings of hot chocolate,’ Talk Education said in its review of the school.

Fridays are the most popular night for one-off boards, leaving parents free to host dinner parties and nurse hangovers, the Telegraph reported.

The bill amounts to £53,508’s worth of fees in 2021-2022, not factoring in any potential sibling discount if available, fee increases or the cost of uniform or trips. Boarding for the older two Cambridge children would cost an additional £8,886 a year if chosen at a later date.

Lambrook, a Christian school, prides itself on its high academic standards, with a pass rate of 100 per cen for the Common Entrance exam – taken by private school pupils as part of the selective admissions process at age 13. With 620 pupils, it is a larger than average pre-prep and prep school but billed as not as pushy as its London counterparts, with some of its intake being bussed in from west London and Oxfordshire, Buckinghamshire and Surrey.

Headmaster Jonathan Perry is known for his charm, and performed a rock-and-roll dance and jumped on chairs to cheer up pupils during lockdown. His wife Jenny works with the pastoral team, with the pair praised for their focus on emotional wellbeing, perfectly in line with William and Kate’s campaigning on mental health.

Mr Perry says on the school website: ‘We give our pupils the ‘feathers to fly’ so that when they move on to the next stage of their educational journey, they will spread their wings and will take flight; leaving as confident, happy, engaging, mature, considerate and thoughtful young adults who are outward-looking global citizens.’

Lambrook’s on-site orchard is home to pigs, chickens and rabbits, available to cuddle during tutor time wellbeing walks, bees with hives, and visiting lambs, and George and Charlotte will have an enrichment afternoon every Monday to complement their academic studies.

They will be able to draw from a huge range of activities for this including farming, bee-keeping, chess, mountain biking, ballet, tap, jazz, mini-masterchef, polo, podcast-making, scuba diving, skiing, as well as life-saving, survival, debating and public speaking.

Louis, who will be in reception, will enjoy ‘Forest Fridays’ and be ‘taken on a journey of discovery in the beautiful outdoors’, the school’s prospectus says, mirroring the Duchess of Cambridge’s philosophy of the importance of outdoor play and spending time in nature.

Talk Education said there is a ‘sense of delicious freedom’ while the Good Schools Guide said one mother was ‘mystified by how they get pupils back for lessons, but like clockwork they tumble in, ruddy-cheeked and full of fresh air’.

And parents enjoy the benefit of not having to deal with muddy PE kits. Games clothes are handed in at the start of term and remain there to be laundered by staff, before being sent home at the end of term. Every item must be named but only sewn-on tags are permitted.

The main school building is a large white 19th-century country mansion. Lambrook was founded in 1860 and two of Queen Victoria’s grandsons, Prince Christian Victor and Prince Albert of Schleswig-Holstein, attended, with Victoria travelling from Windsor Castle to watch them in plays and at cricket matches.

William and Kate can also immerse themselves in the school’s busy social life amid reports of plentiful Lambrook get-togethers and helpful WhatsApp groups. Lamborghinis, Ferraris and Range Rovers apparently fill the car park.

But one Mumsnet user wrote: ‘I have been rather put off by the size of Lambrook, and the reputation of ‘Lambrook’ parents. We are not super wealthy, nor are we city people or country landholders!’

Overseas school trips include jaunts to France, Italy, Iceland and South Africa. But Year 7 students preparing to embark on a canoeing trip in Sweden must each first fundraise £500 to help an underprivileged child do the same through the Teenage Wilderness Trust.

Sustainability – no doubt a hit with eco-conscious William – is also key with the children planting 400 saplings to create a new woodland.

Back to school! How the Cambridges have taken nursery – and school – in London – in their stride before moving to Windsor 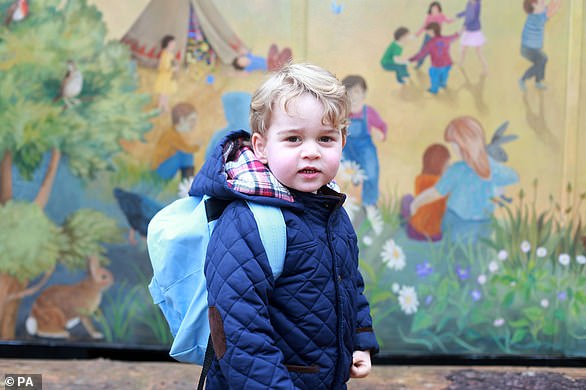 Prince George, pictured in 2016, on his first day at the Westacre Montessori nursery school near Sandringham in Norfolk in a photograph taken by the Duchess of Cambridge 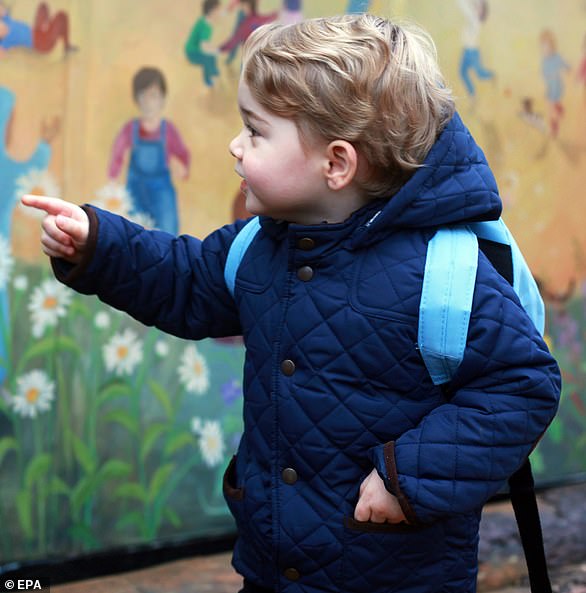 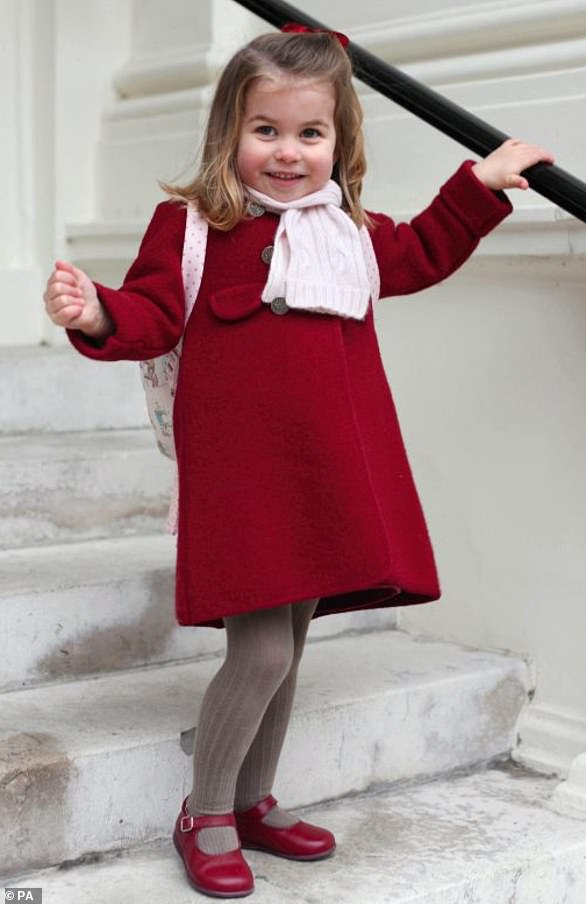 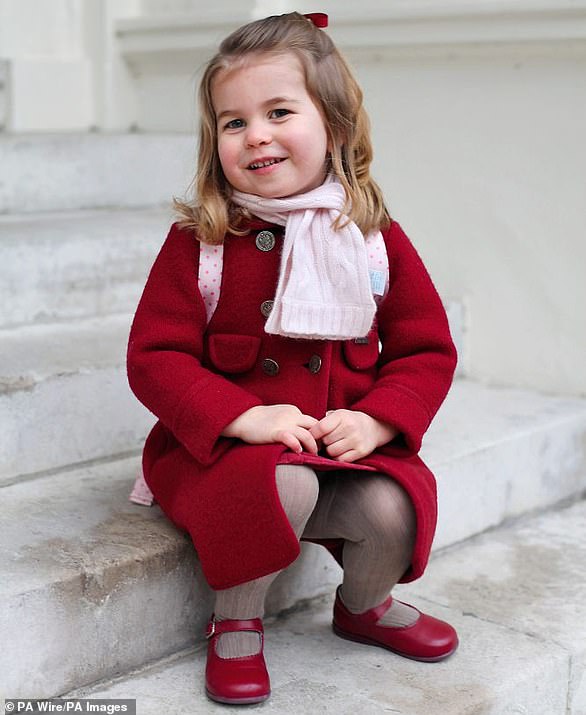 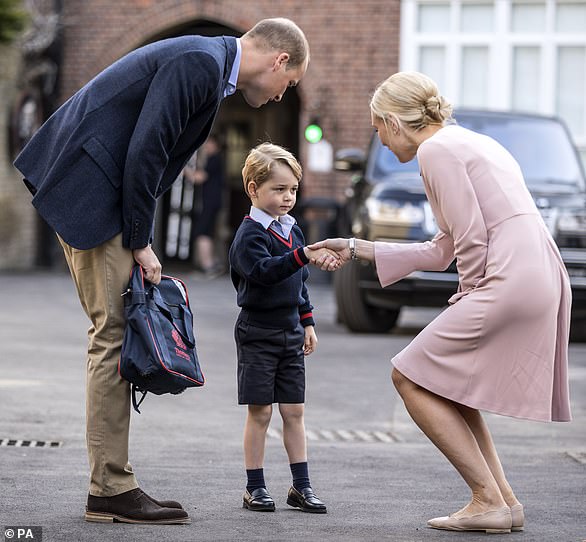 Prince George went on to Thomas’ Battersea in 2019, where he met with Helen Haslem, head of the lower school as he started on his first day of school 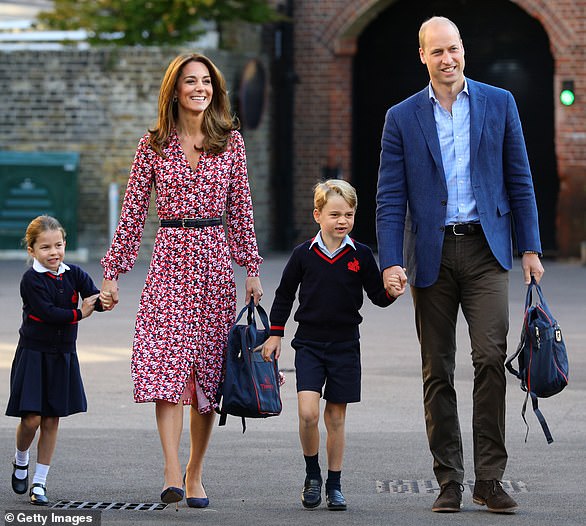 Princess Charlotte arrived for her first day of school, with her brother Prince George and her parents the Duke and Duchess of Cambridge, at Thomas’s Battersea in London on September 5, 2019 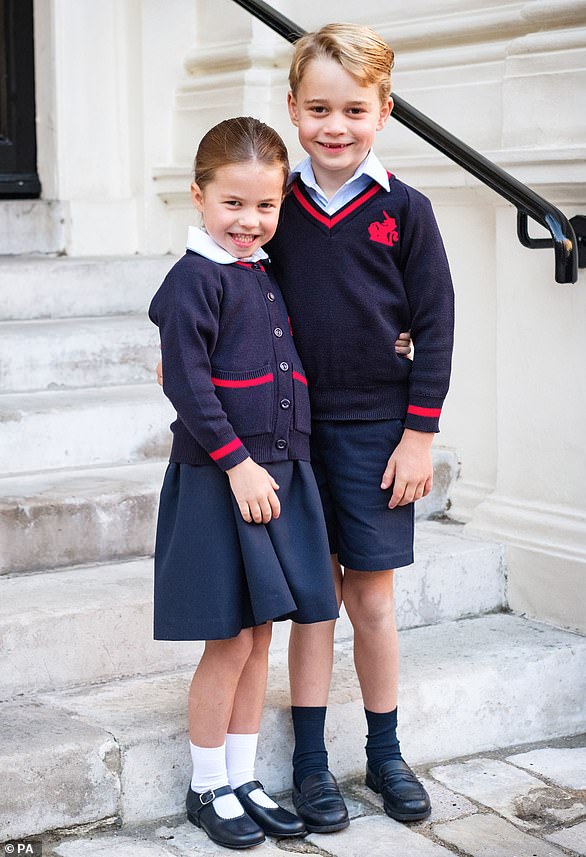 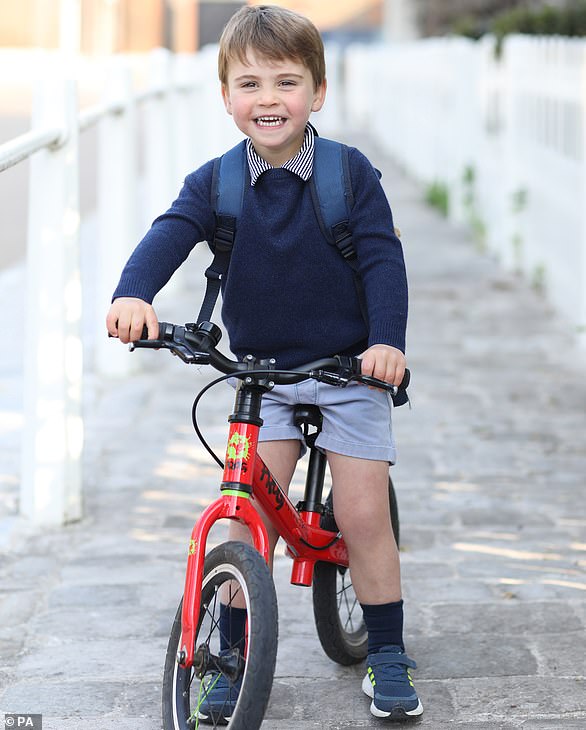 Last year, the Duchess of Cambridge released a picture of Prince Louis for his third birthday, shortly before he left for his first day of nursery at the Willcocks Nursery School