Meghan Markle is ‘confident’ and ‘resilient’ in Manchester

The Duke and Duchess of Sussex took a train from London Euston to Manchester this morning to appear at the One Young World Summit, which Meghan has been attending for years. Meghan Markle was the last “world counsellor” to be introduced onto the stage, and she gave an inspiring speech.

Meghan addressed the One Young World audience from a podium, encouraging them to take action and strive for change.

She said: “You are the future, but I would like to add that you are also the present.

“You are the ones driving the positive change we need across the world, now, in this very moment.”

Body language expert Judi James claimed the Duchess looked happy, and no shadow of anxiety was seen on her face. 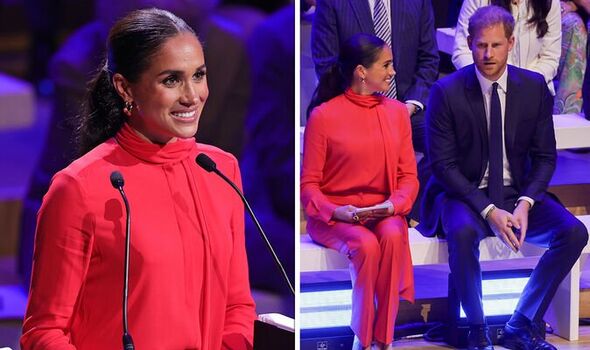 “Meghan managed to look delighted to be back in the UK tonight and even told her audience as much,” she told Express.co.uk.

“Wearing a deep red outfit to signal a range of emotions from passion and love to confidence and resilience, she held Harry’s hand on the way to the stage and gave his back a couple of touches of loving reassurance as he greeted the hosts.”

Meghan and Harry usually show their affection toward one another in public, and often hold hands.

The body language expert continued: “There was no hint in Meghan’s body language of any anxiety or even subliminal resentment about being back in the UK. 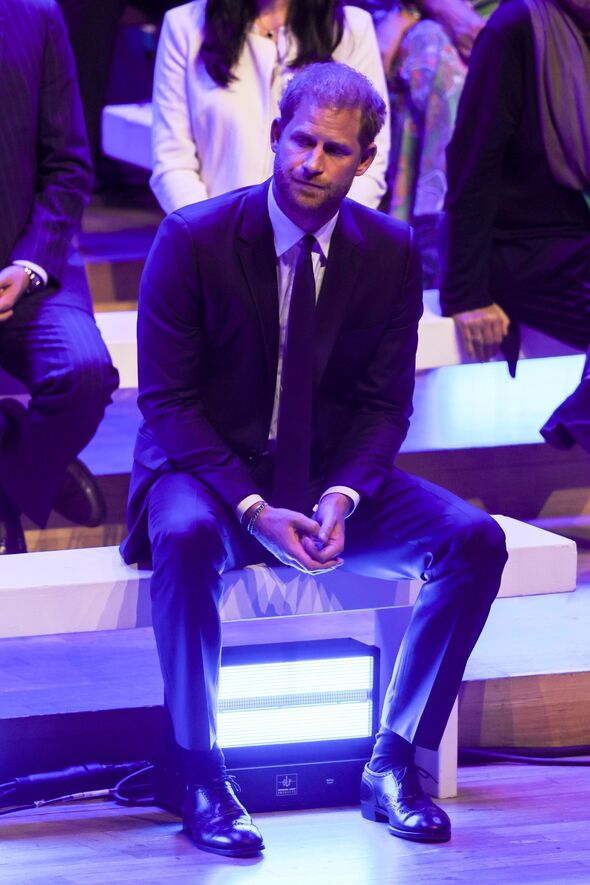 “She chatted and whispered to Harry during the flag ceremony and even raised her hands to head level to clap the UK flags with extra enthusiasm.

“Her speech focused on her experiences, first as a ‘girl from Suits’ who had to save her place card as proof she belonged to being a ‘mom’, as well as her life changing ‘significantly’ in 2019.”

Judi noted that during her speech, Meghan “closed her eyes in several long blinks to register at first coyness and then love as she referenced her husband, who rewarded her with a one-arm hug when she got back to her seat”.

Looking at Harry’s body language, Judi said: “Harry’s anxiety rituals were in contrast to his wife’s elegant confidence though.

“In self-touch gestures reminiscent of his father Charles, he pulled his jacket closed, touched his cuffs, checked his tie and hiked his pants.

“These partial barrier rituals are usually about self-comfort and self-reassurance suggesting he might have felt more ill at ease back in the UK than his wife.”

Both Harry and Meghan looked ravishing as they appeared on the Manchester stage this evening.

The Duchess donned a Valentino tie-neck silk blouse with a pair of wool and silk trousers. 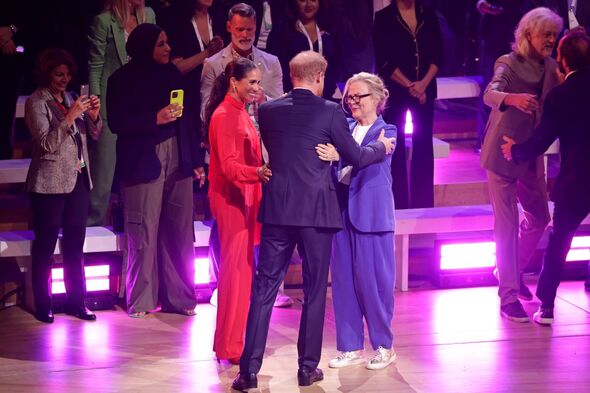 On its website, Valentino described the blouse, saying: “Endless styling opportunities await with this bright-orange blouse from Valentino.

“It’s made in Italy from the label’s fluid silk-based cady couture, and has as an elegant self-tie neck and an additional button closure at the nape.”

Both the blouse and the trousers are priced at £1,200 each.

Meanwhile, Harry wore a simple black suit with a black tie and a white shirt.