Camille Fishel — the model girlfriend of Fanatics founder Michael Rubin — is taking a page from the apparel mogul’s playbook.

Fishel has launched a new line of athleisure wear as a collaboration with Phat Buddha, and we hear the threads are already flying off the shelves.

The collaboration was launched with a Hamptons fitness class at Topping Rose House, headed by Allegra Paris. The line also announced that some proceeds from sales will benefit Baby2Baby.

We exclusively hear that the line will launch at Saks Fifth Avenue next. 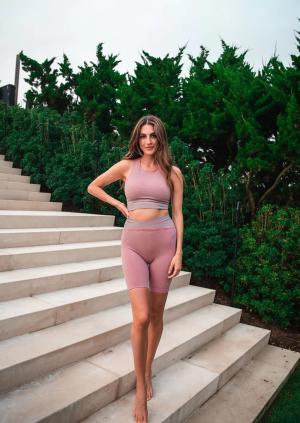 A source said of Fishel’s yoga wear launch event, “The pants sold out in one hour after the event.” Added the source, “Michael’s company dominates in the e-commerce field, and now Camille is doing it too.”

Fishel and Rubin have two children together.

Fishel showed off one of her line’s signature outfits on Instagram, writing, “This is my favorite cream set [and] the last slide is one of the very first drawings I made of it. Pretty cool seeing visions come to life.”

She looked athletically impeccable — and was surefooted at the fitness class despite a recent misstep at Rubin’s starry Fourth of July bash.

Rubin had posted on Instagram of the previous incident: “What a crazy night. Amazing impromptu performances by Drake, Meek, Lil Baby, Travis Scott, Lil Uzi, 21 Savage, Quavo, Ferg, Lil Durk, Fab, Zack Bia, Diplo, Chase B and Miguel, but nothing better than the finale – @camillefishel doing a face plant off the stage and ending up w a quick hospital visit.” 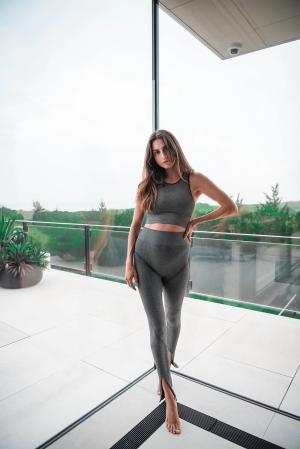 Fishel had added: “I swear I had fun before the face plant… BUT Being 3 wks post partum and having 350 people over your house is not for the faint of heart but we survived (barely)… With that said I’m already ready for next year.”