Content warning: this story contains references to violence against women.

He is simultaneously one of the most popular and most hated people online. Andrew Tate, a British-American former kickboxer, has built a massive audience across TikTok and YouTube, portraying himself as a self-proclaimed influencer and notorious for his controversial opinions on women, masculinity and wealth.

Video clips of the 35-year-old sharing misogynistic rhetoric have been liked and shared millions of times across platforms, triggering concern within anti-violence organisations and educational groups across Australia. 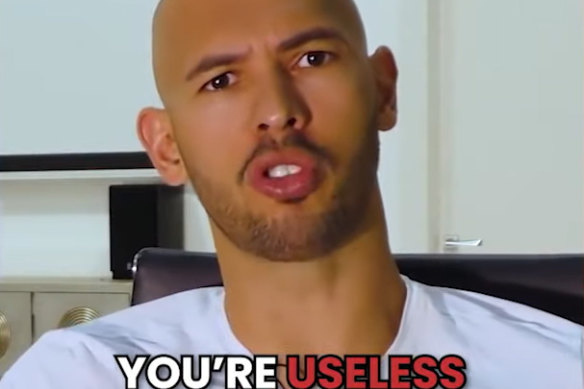 The former Big Brother UK contestant is no longer just a fringe personality in a saturated digital space. He does not appear to have his own TikTok account, and he was suspended indefinitely from Twitter in 2017 for espousing inappropriate views. Yet, his content continues to proliferate with his ideology spreading thanks to the significant number of fan accounts dedicated to him across various platforms.

“The cheapest car I possibly own, I would not let a female drive in,” Tate can be seen saying in one TikTok fan account video. “If you think I’m going to see a chick and just because she is hot … I’m going to assume that she has the competence to pile at a $5.2 million Bugatti that she has never f—ing driven before? Females have no innate responsibility or honour.”

Born in Chicago, USA, and raised in Luton, England, Tate now lives in Romania, where, as explained in one of his videos, he purportedly registered his home as a shooting range so that he could keep several firearms on the premises.

Tate has admitted to being investigated by authorities for allegedly abusing a woman and participating in human trafficking, accusations he has continuously denied and has maintained were dismissed by the police.

Anti-violence advocates are becoming increasingly concerned about the growing size of Tate’s following. With his clips racking up hundrds of millions of views on TikTok, it’s feared his extreme ideology on issues of gender, relationships and sex could influence young, impressionable minds and result in future instances of physical violence, abuse, and coercive control.

“This is money-making business, for Tate and for the platforms who host him,” chief executive Deanne Carson said. “Until we regulate social media to protect children, we will continue to see men like Tate get rich by selling hate to boys and men.”

Although some boys the organisation has spoken to dismissed Tate’s videos as misogynistic, Carson said several would passionately defend him.

“When we argue with boys about Tate or others like him who are making money from radicalising boys and young men, we are stepping into a set trap,” Carson said. “Tate has told the boys we will argue with them and that this is proof that Tate speaks the truth. It reinforces boys’ views of themselves as victims of girls and women.”

Jaime Chubb, chief executive of the Centre Against Violence, said much of Tate’s content offered views already accepted by some young men, noting the effect of the Johnny Depp and Amber Heard trial, as well as the worship of sports stars facing assault charges.

An additional concern was the way audiences view the content.

“It’s being consumed on platforms that are generally viewed in isolation,” Chubb said. “When young people consume messages like this, whilst sitting in their rooms alone, there is no one there to moderate the message, to challenge his views.

“For many young men the messages are in some way making them feel strong, validated, seen, or powerful … that is when the feelings will turn into actions and behaviour.”

TV personality and former reality star Abbie Chatfield has reportedly already been at the receiving end of verbal abuse from Tate’s followers after she posted an Instagram story saying she did not wish to give oxygen to his damaging views.

“I’m getting DMs from what appear to be early teen boys saying, ‘I hope Andrew Tate destroys you’ or things along that line,” Chatfield said on The Project on Sunday.

With instances like these appearing more regularly, conversations about consent and respectful relationships need to be prioritised within educational systems and the home, Chubb said. Teachers, parents and guardians should set positive examples and actively engage young men in honest conversations about healthy values.

According to TikTok’s community guidelines, users are prohibited from posting and sharing content that supports misogyny or violence. Users guilty of “severe or multiple hate speech violations” are banned, and the content removed.

“Misogyny and other hateful ideologies and behaviours are not tolerated on TikTok. Our investigation into this [Tate] content is ongoing and we are removing accounts and videos that violate our Community Guidelines,” said a TikTok spokesperson.

“We are continually strengthening our policies and enforcement strategies as part of our work to keep TikTok a safe and inclusive space.” 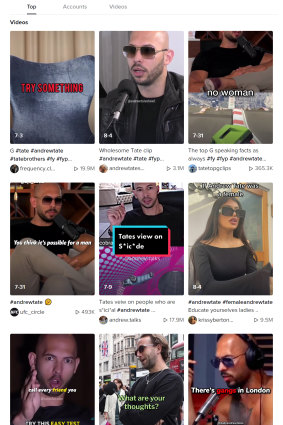 A screenshot of the search results for ‘Andrew Tate’ on TikTok.

TikTok has removed several Tate-related videos, including one where he brandished a machete and one where he speaks of choking women, but due to the scale of Tate’s popularity, Chubb said it was not as simple as merely deleting inappropriate content.

“How it grew to such epic proportion also needs to be addressed. Whilst I think it is naive to believe that we can control all information young people consume, without addressing how he became so powerful, removing Tate will just open up space for other misogynistic, racist or homophobic messaging.”

Allan Ball, director of the anti-violence movement White Ribbon Australia, said young men are being encouraged to post videos of Tate, favouring highly contentious content to “amplify views and interaction”. The gaming, music and extreme bravado accompanying the videos work to create a “filter of normalcy”.

“Impressionable young minds are drawn in by the money, power and unwavering confidence, to become part of a tribe,” Ball said. “While men fail to speak up and call out this hate, they too are enabling misogyny to flourish. This is what links all men to the violence that only some men do, together with a shared belief in the cultural ideal of masculine dominance.”

He suggested videos like Tate’s be superimposed with a “fact-check filter”, labelling them as harmful and misogynistic.

“Let’s love-bomb our platforms with stories of gender equality and the better 11 billion [people] and dismantle those that seek to profit from division, ignorance and hate.”