A mother-of-12 has said she fears her family will have to ‘walk around in blankets’ if the cost of their heating rises further this winter amid the cost of living crisis.

Zoe Sullivan, 44, her husband Ben and their children live in military accommodation in Lossiemouth, Moray, Scotland, and the rent is taken directly off of Ben’s wage.

The family spends £320 on food per week and up to £400 per month on energy bills, but Zoe fears the cost of energy alone might jump to £700 when the price hikes hit. They are already using money that would have been put into savings to cover the cost of their food and energy. 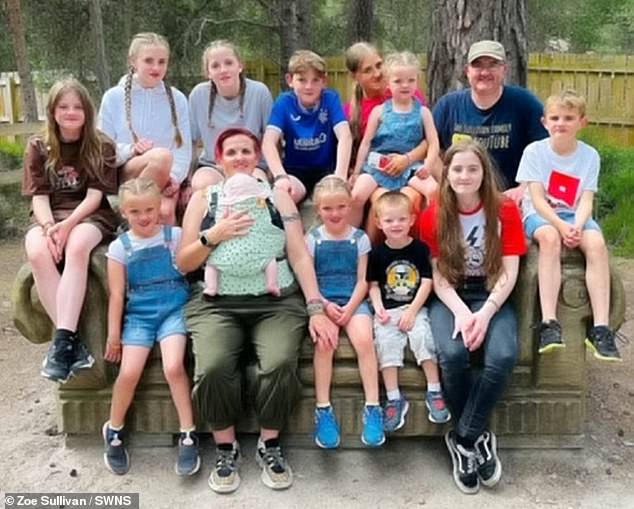 Stay-at-home mother Zoe said she spends £320 a week on groceries, which, due to her large family, boils down to £21 on food per person. She added the family pay £200 to 250 on energy bills for now, but fear this cost might jump to £700 in the next year 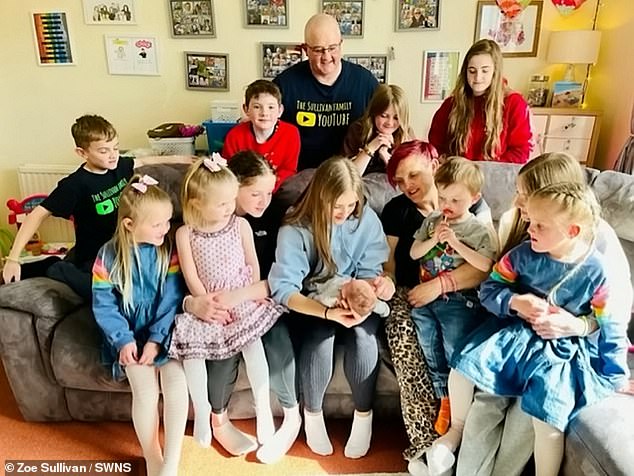 Zoe said: ‘The jump in price is huge, we don’t use any more, it’s just the increase in price.

The mother-of-12 revealed the simple hacks she uses to save on money.

‘It is really scary, there doesn’t seem to be any help for people. There’s no way we can meet these costs, what we would have put into savings is now going into food and bills.

‘I’m at home all day with the little ones, it gets cold in winter in the north of Scotland. We are thinking “are we going to have to go around in blankets”. There isn’t any more money to pay any more bills.’

Ben is also winding down a 27-year career, meaning they will soon be faced with buying a house and having to get a mortgage and moving out of military quarters. The couple also needs two seven-seater cars to transport their family.

The mother-of-12 has to be thrifty and is careful on making her money stretch, feeding each member of the family on £21 a week.

She shops at Tesco, Adli, Asda, Home Bargains and B&M to find deals, often in the evenings when items are discounted.

The family’s weekly shop includes around 20l of milk, eight boxes of cereal, 12 loaves of bread, 10kg of fruit including six punnets of grapes, 24 eggs and four bottles of squash, one packet of nappies and one packet of wipes.

For health and environmental reasons the family don’t eat much meat – which is also more economical, and they only have meat twice a week.

‘We do try to make things last as long as possible, I hate throwing things away,’ Zoe said. 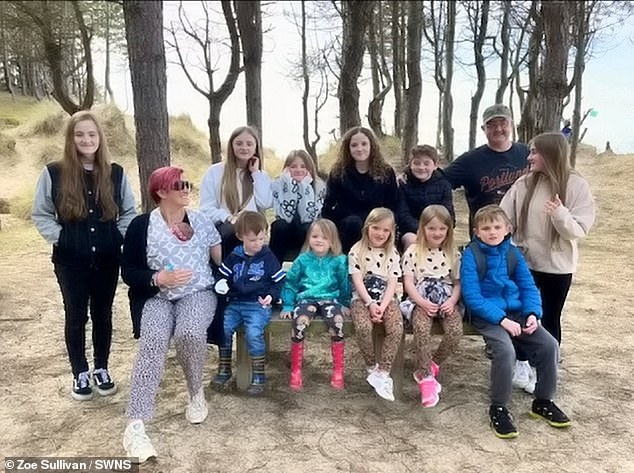 Due to the cost of living crisis, Zoe fears her brood will never get to enjoy a holiday abroad. But they make the most of the Scotland wildlife when they can 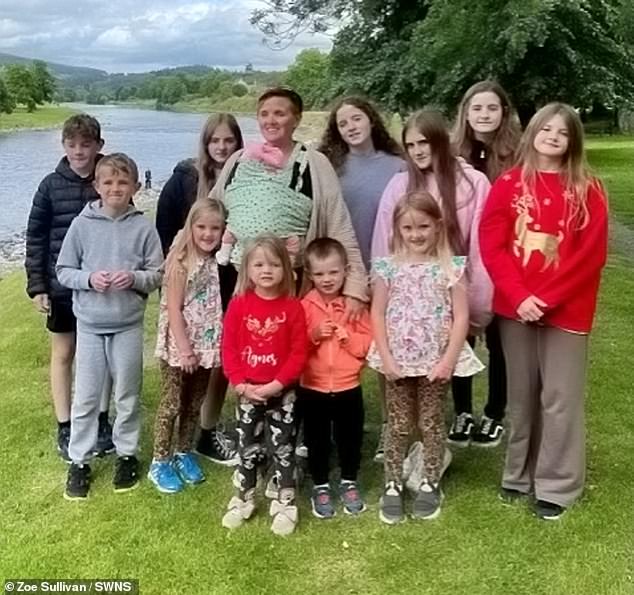 Zoey and her 12 children during a trip to the local lake. She revealed she only uses the washing machine once a day, in spite of large brood

‘I have a Tesco Clubcard and Asda rewards card, and I always shop around. I only use the dishwasher once a day, if it’s Christmas I use it twice a day.’

Shopping essentials! What it takes to keep the family fed

She continued: ‘I have a budget of £320 a week for everything – food, toiletries, that would probably cover the shopping, some of the kids have lunches at school.

‘We have four teenage girls so that’s stuff like their face washes, but we could get through £6 of fruit a day.

‘Fruit and things like that are really expensive, when you find blueberries are £3 and then become £3.50, it’s a big price increase.’

The stay-at-home mother uses two airers to dry laundry and tries to minimise how often she uses the tumble dryer – and never puts stuff in straight from the washing machine.

Rather than outings to the cinema, the family have a Netflix subscription, a Sky box, and Disney Plus, which keeps the kids entertained, and Zoe and Ben never go out for ‘date night’.

She added: ‘I use the tumble dryer as little as possible, we do things like keep the kids’ clothes vacuum packed and put away so they can be passed down.’

The family has two seven-seater cars, one of which is used by Ben to go to work, while she uses the other for shopping.

The family have not had a holiday in years but live near two beaches in Lossiemouth, Moray, so often go for walks and make do with daytrips. 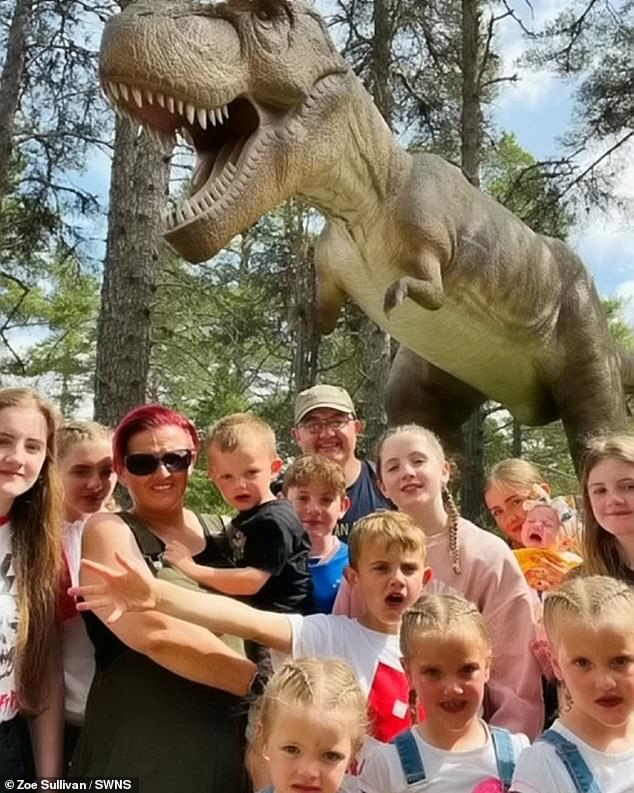 The family posing together in front of a dinosaur statue at Paradise Wildlife Park, at the Zoology Society in Hertfordshire 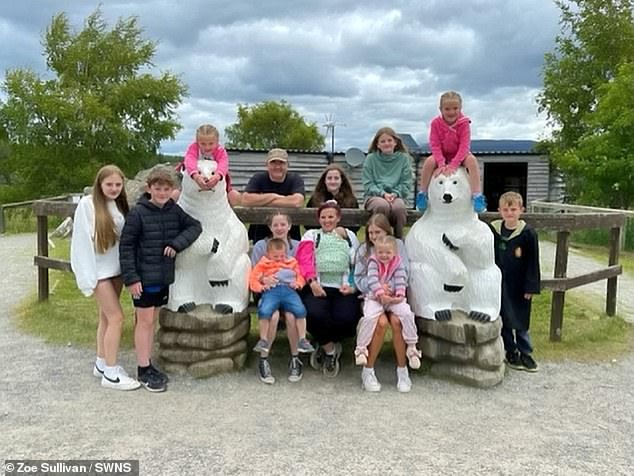 The family during a field trip to the Paradise Wildlife Park. Mother-of-12 Zoe admitted she is worried about rising energy bills costs

They had hoped to be able to take the kids away, although savings for that are now being put into groceries and bills.

The couple have previously resorted to putting groceries on a credit card but hope to be able to avoid that.

The family will soon need to find a five-bedroom home which Zoe said was daunting, and she and her husband gave up alcohol and neither smoke.

Zoe said it is impossible to avoid using a water heater which runs on gas, and she will have to give up buying Heinz baked beans in favour of own-brand ones unless the situation improves.