The now 8-year-old Prince George will one day be a ruling monarch, but what can Britons expect from his reign? Jessica Adams spoke exclusively to Express.co.uk about what the future is meant to have in store for the future King.

Jessica began: “Prince George was born on July 22, 2013 at 4.24pm at St. Mary’s Hospital in London, making him a Cancerian like his father William, and Diana, the Princess of Wales.”

Despite a world of opportunities open to the young Prince, his life will not always be smooth sailing, according to astrology.

“His toughest challenges come when young and 2022, 2023, 2024 are extremely difficult for the young Prince,” the expert claimed.

“He will learn the gift of willpower and self-control to get through them. 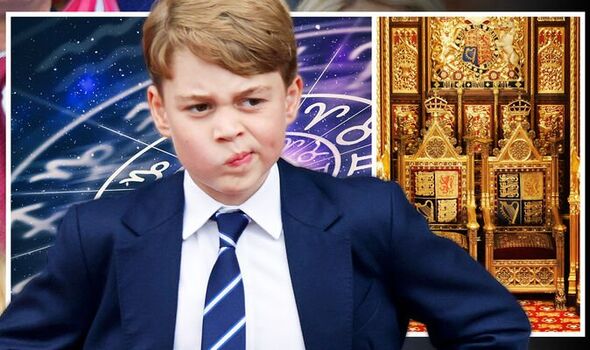 “The young Prince is going through an astrological cycle of great challenges which can only happen every 248 years, as he passes his 9th, 10th and 11th birthdays, and will need lots of support to get through.”

What can the country expect from the future King in the upcoming years including his transition into pre-teen territory?

“He will make some unlikely friends in the next five years and be drawn to rebels and eccentrics at school,” the astrologer suggested.

“He’ll be part of a gang or team that allows him to break free from royal restrictions in his pre-teen years.

“During his adolescence he is likely to question the Church of England and his religious upbringing and may push against it.”

The Royal Family may see some alterations very soon as royal finances are predicted to change between March and June 2023.

“This will pave the way for George’s future inheritance and the management of The Firm,” Jessica continued.

Moving out of adolescence, Jessica predicted that Prince George would become a grounding, reliable ruler.

“He has Mercury, Mars and Jupiter in Cancer, the sign we associate with home and family, property, homeland and home town,” she added.

“He is patriotic, believes in Britain and will back it all his life.”

She continued: “Cancer the crab carries his roof on his back; George takes England and particularly London, wherever he goes.”

And like his father, grandfather and uncle, Prince George will go on to serve his country.

“Once he chooses between the army, navy or air force, he will be a natural fit,” Jessica suggested.

She also said the UK has nothing to worry about when it comes to the future King: “He does not just pay lip service to his country, he believes in it and will fight for it.

“George has Scorpio Rising and will begin to look more like Charles, Prince of Wales when he is older. Charles is a Sun Scorpio.”

As for the future Queen Consort of the UK – what kind of woman will Prince George take for a wife?

Jessica stated: “His Moon is in Capricorn so he will marry his mother, Catherine.

“She is a Sun Capricorn and his ideal of womanhood is like her; professional, grounded, ambitious and successful.”