Princess Diana’s favourite DJ Graham Dene reveals how the ‘cheeky’ royal told him a saucy joke about Miss Piggy, sent him a mug with her picture on it, and secretly sat in on his final Capital radio show

Princess Diana’s favourite DJ hs shared some of his favourite memories of the late Princess, revealing her cheeky sense of humour and love of the song Uptown Girl.

Boom Radio presenter Graham Dene presented the breakfast show on Capital Radio in the Eighties, and he started getting to know Diana afetr finding out she was a regular listener.

To mark what would have been Diana’s 61st birthday on July 1st, Graham has shared some of his encounters with the princess – from the time she secretly sat in on his final show, to her telling him a very rude joke about Miss Piggy and Kermit the Frog, live on air.

Graham, now 73, began his radio career in the ‘70s, broadcasting to the hard workers in biscuit factories on the closed-circuit radio station UBN, before being lured to Liverpool to join the new Radio City.

Now a presenter for Boom Radio, he still looks back fondly on the time he spent with Diana, and reveals how she bought him a mug with a picture of herself on it as a joke. 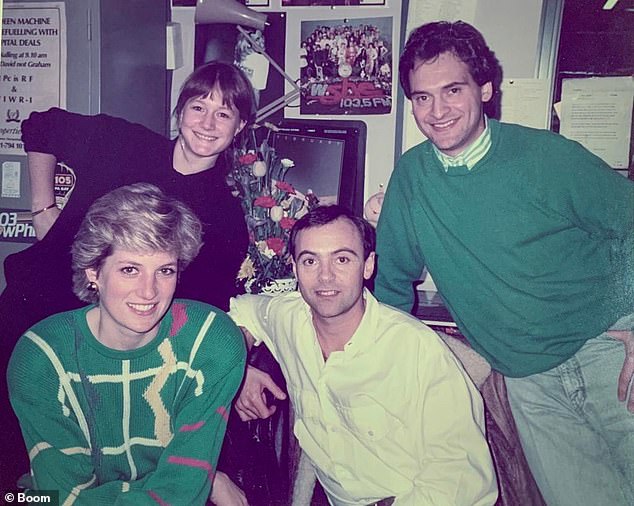 ‘I met Princess Diana for the first time when she came into the Capital Radio studios in London early 80s – at the time, she was a patron of our charity Help A London child.

‘The staff had lined up downstairs in the office to meet her, and she was walking along, shaking hands and having a brief chat. It was very nice, very formal.

‘Princes William and Harry were very young at that time, and I had previously been told that because of the boys being early, she used to get up early, and tune into my breakfast show – she loved Capital and loved pop music.

‘That morning before the line-up, I had joked on air to the listeners about meeting her that evening and how nerve racking it would be, and I said: ‘I just hope I’ve not got a sweaty hand.’

‘That evening, when she came to me, she shook my hand and said, “Oh, hello Graham,” and began to walk away. But then she turned back to me and said: “Oh, by the way Graham, the hand was perfectly dry.” 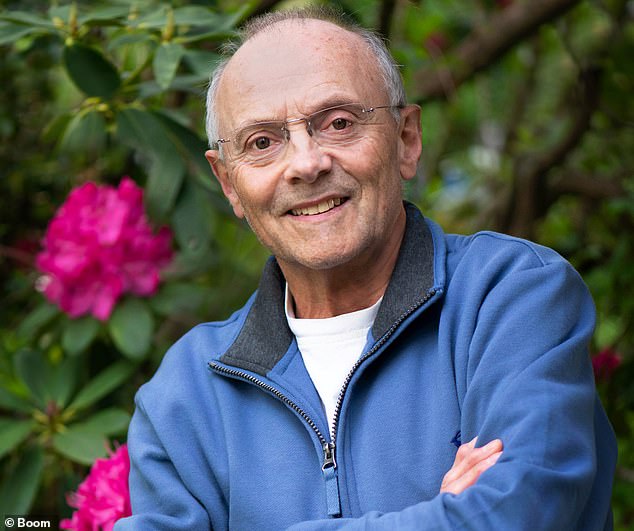 Graham, now 73, (pictured) began his radio career in the ‘70s, broadcasting to the hard workers in biscuit factories on the closed-circuit radio station UBN, before being lured to Liverpool to join the new Radio City

‘So she had been listening to the show that morning!

‘What Princess Diana didn’t know though was that there was a curtain behind me, and just before she had got to me in the lineup, I had wiped my hand on it to make sure it wasn’t sweaty!

‘At another thank you party, this time held at the old London Air Studios owned by record producer Sir George Martin, Diana came running over to me saying: “Graham, Graham, can you play a song for me in the morning?” I said “of course I could, what would you like?” But she couldn’t make up her mind.

‘In the end, she decided on Billy Joel’s Uptown Girl, which I thought was extremely appropriate.

‘The next morning, as far as I was aware, nobody else knew about this – it was our little secret. 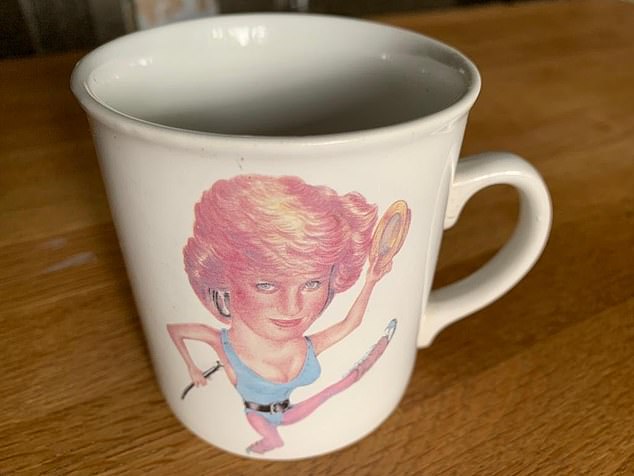 Diana once bought Graham a mug with a picture of herself on it. She bought it from Kensington Market after she performed a three-minute dance to Billy Joel’s Uptown Girl, alongside ballet star Wayne Sleep in December 1985

‘I had planned to play the song at around 8.15am. We went to the main 8am news, and at the end of the news bulletin read by Douglas Cameron, he revealed that I would be playing a song for Princess Diana on my show.

‘I sat there flabbergasted – he had beaten me to it! Somebody had leaked it, but goodness knows who it was. So, I went straight into Uptown Girl after the news, and afterwards I said: “I hope he appreciates the royalties!”

‘To this day, I still have no idea how that happened.’

Princess Diana sent me a mug with a photo of her – it was just her sense of humour!

‘One day, a package arrived for me in the studio, with a mug inside. It was a white mug, with a caricature of Diana on it – she was wearing a low-cut blue leotard, and had a top hat and cane in her hands, while doing a high kick.

‘It was after Princess Diana performed a three-minute dance to Billy Joel’s Uptown Girl, alongside ballet star Wayne Sleep in December 1985.

‘She bought the mug in Kensington Market, apparently, and sent them to various people and I was one of them. It showed her personality and her wonderful sense of humour, and the fact that she loved dancing.’ 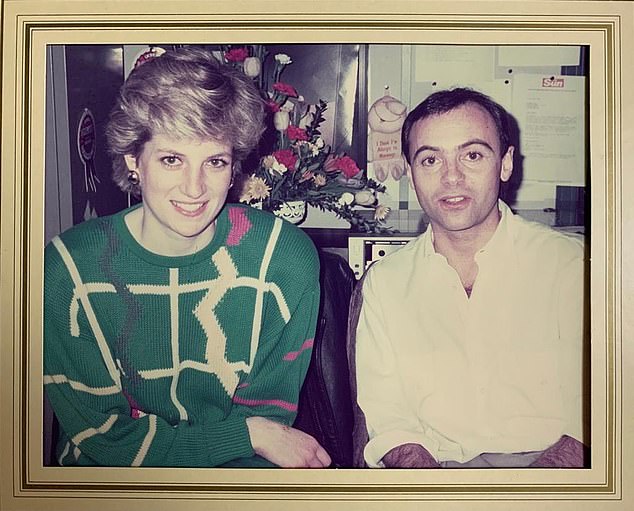 Diana pictured here with Graham, sat in on his final breakfast show in 1986. Graham says that it was a nerve wracking half hour

‘It was my birthday and I was in the studio, when suddenly a call came through on the internal photo. I wasn’t on the air, so I picked it up and said “hello”. This voice said “oh hello Graham, it’s the Princess of Wales here…” It sounded like a PA we had at the time called Nicky, so I said “Oh pull the other one! Come on, very good!” thinking it was a wind up.

‘Then Millie Dunn, who was a very good friend of Diana’s who worked at Capital Radio, raced into the studio, saying: “It’s her!”. And I thought “oh my god”. I went back on the phone at that moment. The record I was playing on air was coming to an end and I had to go to an advert break. So I had to say to Princess Diana, “I’m so sorry, but could you please hang on.” While we did two minutes of adverts – while she was on hold!

‘Afterwards, I spoke to her and very sheepishly apologised, explaining that I thought it was someone taking the mickey. She was very good about it – she just laughed and said: “Oh, I just wanted to wish you a happy birthday to you.’” 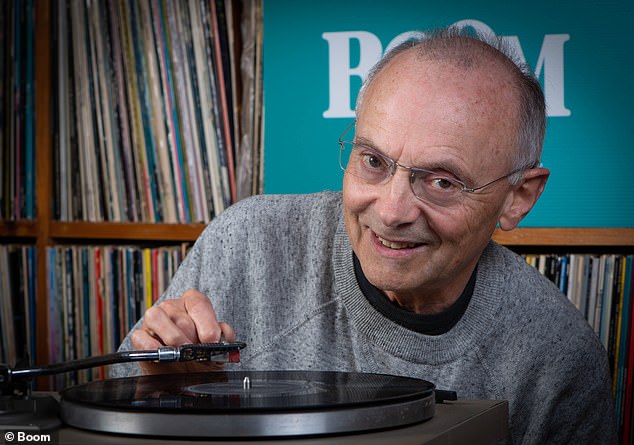 Graham now presents a show on Boom Radio every Mon-Fri at 7.30am. Boom is a UK-wide national radio station principally aimed at Baby Boomers aged 60 to 75-years-old

‘It was arranged by Diana’s friend Millie that Diana would come into the studio for my very final Breakfast Show in 1986.

‘I remember reading the news headlines at 8.30am, and the door opened and Diana came in and sat down for the final 30 minutes of the show. She was very relaxed, wearing a sweater and jeans.

‘I asked her whether she would like to come on air and say hello, but she declined, she thought it was better not to. She opened her handbag to pull out the original Top Gun soundtrack, and she wanted me to play the theme tune.

‘We managed to get a scratchy version of it from the library to play as we couldn’t play cassettes. I guess she was a Top Gun fan, but she certainly loved the soundtrack.

‘It was a nerve-racking half an hour; not only was it my last breakfast show ever, which is a difficult moment, but Princess Diana was sitting across from me, staring at me with those lovely eyes! It was wonderful and difficult at the same time.

‘I also asked her if she would like me to dedicate a song to her husband. So I played a song and said, “that was for Charles in Kensington. Just let you know your wife wants you to know she will be back for lunch”. 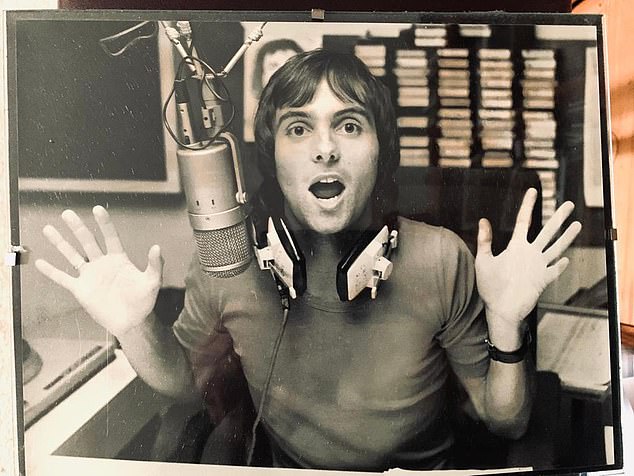 Graham (pictured) met Princess Diana for the first time when she came into the Capital Radio studios in London early 80s – at the time, she was a patron of Capital’s charity Help A London child

‘After the show had finished, we went downstairs along with her security guard, and I made her a cup of tea in a plastic cup, just like the rest of us.

‘When I showed her out, you can imagine the stares from people coming into work – they had no idea she would be there and they couldn’t believe it. There was a lot of shock and surprise, and these people were used to seeing big stars coming into the Capital studio.

‘It was very exciting, and I’m sure they’ve dined out on it ever since!’

‘I’d met Diana quite a few times before when this happened. It was after the Prince’s Trust concert at Wembley in 1988, there was a reception for everybody involved in the Hilton hotel in Kensington. Every huge pop star at the time was there – Phil Collins, Peter Gabriel, Joe Cocker, Elton John, Rick Astley, the Bee Gees.

‘I arrived, and the event organiser Peter Smith came up to me and pulled me through the hotel, saying, “where have you been, she’s been waiting for you, she’s asking for you”. I said “who”, and he replied with, “the princess!” He ushered me into a conference room.

‘He opened the door and there she was – waiting for me! Wow. And she turned to me and said: “Graham, I want to tell you a joke.” And then she told me this very saucy joke about Miss Piggy and Kermit the Frog. It was a very rude joke and it’s better if I don’t say it – it would make anyone blush! Let’s just say Princess Diana had a very, very cheeky sense of humour.’ 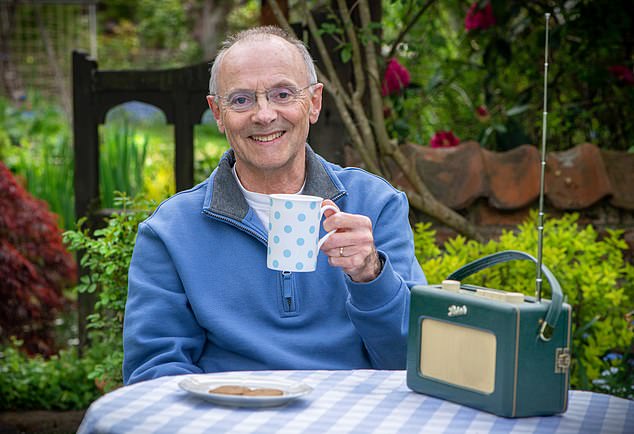 Graham (pictured) recalls a saucy joke that the Princess told him about Miss Piggy and Kermit the Frog. He says that she had a very cheeky sense of humour

‘A few years after I’d met Diana, The Prince and Princess of Wales were hosting a thank you party at Kensington Palace, for everybody who had been part of the Prince’s Trust.

‘I was able to take a guest along, and I asked my mother, Vera. She wasn’t very well at the time and found it difficult to walk, but I took her along as I thought it would be a very special evening for her.

‘Diana knew this. She saw me and my mother, who was sitting down at the time, and Diana came over to say hello to my mum.

‘My mum tried to stand up to greet Diana, but Diana said: “No, you sit in the chair,” and Diana knelt down to my mother. I just thought that kind and thoughtful gesture said everything about Diana. She was so welcoming. It was just so lovely.’