The Swedes took over Hollywood Wednesday night when IKEA previewed Obegränsad, a limited-edition collection created in collaboration with the high-profile electronic dance music trio Swedish House Mafia. The launch took place at Goya Studios, complete with IKEA’s signature foods and custom cocktails. The 20-plus pieces of the collection were on tactile display, available for touching, playing and sitting on for the youthful crowd of industry folks, including fellow electronic superstar Madeon, actor Ian Mellencamp and a cross-section of influencers.

This meeting of Swedish titans is a natural one that has been in the making since the college days of Swedish House Mafia members Sebastian Ingrosso, Axwell and Steve Angello, the last two of whom were present at the Hollywood event. During a Q&A, Angello commented, “Growing up, we used to hack IKEA’s furniture all the time.”

He continued, “We approached them about doing something that would cater to our younger selves. Something that we would be able to put out to the public that was affordable, functional and just a great product.”

“I feel like every second person I meet expresses themselves in one way or another, music, or just creating, on their laptops,” Axwell said. “With this collection, we aim to facilitate a little bit of that, making it a little bit easier and accessible for them to make music in their homes.”

The items in the collection, which launches in October, are geared toward music. (Ironically, given the limited-edition billing, Obergräsad is the word for “unlimited” in Swedish.) Geared toward both creators and consumers, the line offers products from studio desks to shelving units and stands for records, speakers, tablets and laptops. The offerings include an armchair, record and laptop bags, a cunning accessories bag, a range of lighting options, a clock, a rug and slippers … and, perhaps inevitably, a record player.

The Obergräsad all-black collection taps into IKEA’s clean and simple lines. Spare and geometric, it uses IKEA’s classic designs for desks and shelving as a jumping-off point. Where it taps into Swedish House Mafia’s sensibilities is in how the basics are modified — for example, raised stands built into the desk for speakers. Similarly, the shelving units’ height is that which would be found in a DJ booth, with easy access to vinyl. The decks setup brings the club to the home with its practicality, which allows for easy manipulation of the equipment, as was witnessed with the evening’s DJ, Bayli.

The stars of the Obergräsad collection are its accessories. The plush cuddly throw, squishy cushion cover, area rug and slippers are so rich, they have a sheen to them. The stylish lights have a warm glow designed to nourish creativity, a sharp contrast to the harsh glare of work lights. The crown jewel, however, has to be the iconic record player. A unique design that has the record sitting on a thick slab that juts out from the base of the player, the genius lies in its minimalism, at a competitive price point. 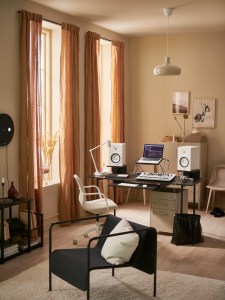 “We wanted to make a music environment, really put music center stage and show off equipment and music,” said Angello. “Our love for the physical and the craft of making music and vinyl and growing up with that played a big part in our lives. It’s a beautiful thing to value something and we wanted to give that opportunity to everybody.”