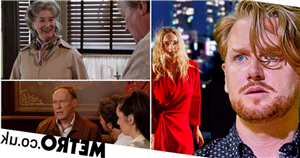 Coronation Street fans had better make an appointment with their nearest TVs next week, as the ITV soap is lining up what is undoubtedly its most action-packed week of the year thus far.

Kelly Neelan’s (Millie Gibson) exit is set in motion in truly spectacular scenes, featuring all sorts of modern technology, but before all that the teen is called to the police station to identify her kidnapper.

When she’s shown Kieron, she pretends that she doesn’t recognise him, much to the dismay of Craig Tinker (Colson Smith), but it turns out that Kelly has a plan, as subsequent scenes see her approach Kieron, offering him £10,000 to kill Gary Windass (Mikey North)!

Kelly and Aadi Alahan’s (Adam Hussain) engagement do takes place later in the week, and Gary offers some heartfelt words about how he and Maria Connor (Samia Longchambon) have loved Kelly being a part of their lives.

Kelly, however, tells him that she knows he murdered her dad Rick!

Gary storms after her but he’s knocked unconscious by Kieron and thrown into a van! Kieron and his sidekick take Gary to the exact spot where he murdered Rick and proceed to point a gun at him, ordering him to dig his own grave.

Kieron later leads Kelly onto the roof of a disused mill, revealing that he intends to kill her and frame her for Gary’s murder in the process. Gary, having seemingly escaped captivity, joins forces with Aadi, and the pair find Kelly on the roof.

A shot rings out, but who has been hit?

You’l just have to tune in to find out. Or, in the meantime, you could check out our picture gallery above, previewing the shocking scenes in question.