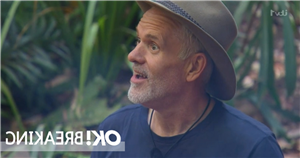 With theI’m A Celebrity… Get Me Out Of Here! final just days away, viewers of the hit ITV show have voted to send another campmate home.

Following the public vote, Chris Moyles has become the sixth star to be eliminated from the jungle, joining the likes of former contestants Boy George, Charlene White and Sue Cleaver.

During the elimination process, I’m A Celeb presentersAnt and Dec revealed that Chris and Seann Walsh were the two campmates with the lowest amount of votes, though it was Chris who ultimately ended up saying goodbye to their time Down Under.

Following his departure, he hugged his campmates and said: “I’ve put clean clothes on and everything. Thanks for everything, thanks for the stars and the food.”

The news of Chris’s departure comes after comedianBabatunde Aléshé was the fifth celeb sent packing on yesterday’s show.

As he left the jungle, the Gogglebox star opened up about how the show had helped him “feel brave”after he failed to complete a terrifying walk the plank task even before entering the jungle. “You guys have made me feel brave. I've conquered two of my biggest fears, which is frogs. I know it's hilarious but I frickin hate those little demons, and heights,” he said.

“And every single last one of you, I'm going to, you know, cherish for the rest of my life. This has been the best experience I've ever had. Thank you to everybody.”

But despite calling the I’m A Celeb jungle the “best experience” he’s ever had, the 36 year old admitted that he’d “definitely” considered walking out of the show completely.

Speaking for the first time in-depth about his experience, Babatunde explained: “It is intense, it’s not easy, being there is not easy at all – it’s not a joke you’re really in the middle of the jungle, it's not a set.

“There’s no ‘can I have a biscuit?’ on the side. They don’t give it to you, it’s real and we learnt in the first week that they’re not playing.”

He added: “When they say you’re having rice and beans, they really mean it and you have to get comfortable with having so little and when you win trials and you actually get food you have to learn how to appreciate and share so little with so many.”