DOHA, Qatar — As Brazilian star Neymar lined up a dangerous free kick on Thursday in his team’s 2022 World Cup opener, one of his Serbian opponents, Andrija Zivković, did something that, to the untrained eye, seemed curious. He lowered himself to the grass, and turned his back to the ball, and just lay there, as if to fall asleep.

always find buddy lying behind the wall funny. Don't watch a ton of soccer but I've never seen that come into play. pic.twitter.com/g9G3xJ2Zlk

But he was not the first, nor will he be the last player to go prone defending a free kick. The ploy has spread throughout European soccer in recent years to counteract the sport’s dead-ball wizards. After decades of curling free kicks over walls, some began to sneak shots under a jumping wall. So defending teams began cleverly walling off that low route as well.

The evolution of free kicks and walls

This back-and-forth evolutionary cycle began decades ago. Ever since 1913, defending players have been required to stand at least 10 yards away from the spot of any free kick. For the better part of a century, soccer teams of all kinds have lined up multiple players in a “wall” 10 yards away — often to cover the near side of the goal, while the goalkeeper covers the far side.

In the 1980s, or thereabouts, free-kick takers began going up and over the wall — so defenders began jumping to add a couple feet to the wall’s height. Once jumping became commonplace, some legends of the sport concocted a new plan. Rivaldo went under AC Milan’s wall for his first goal of a Champions League hat trick in 2000. Ronaldinho did it in 2006 against Wolfsburg. Lionel Messi has done it three times. Cristiano Ronaldo did it for Manchester United in the Premier League, and again for Real Madrid en route to a Champions League title.

The origins and history of lying down

But last decade, the seeds for a solution were planted in Brazil. Ronaldinho brought under-wall free kicks to his homeland. A couple years later, Ricardinho, a journeyman midfielder on loan at Figuerense, went semi-viral when he stood behind the wall, then dropped to the ground as Palmeiras playmaker Jorge Valdivia took aim from 20 yards. Valdivia tried to go over the wall, but teammates and television viewers noticed, and recognized Ricardinho’s genius.

The tactic slowly caught on in South America, and the natural forces of innovation refined it. By 2014, some defenders had gone fully prone.

By 2017, it had migrated to Europe — albeit sparingly, and in varying forms. Some players would (and still do) kneel rather than lie down. (Going horizontal allows for more complete coverage, but could leave a player slightly more vulnerable to injury or slightly slower to react to a set play.)

In 2019, Inter Milan’s Marcelo Brozovic famously slid into position behind the wall as Luis Suarez tried to go under it:

By last season, the tactic had become almost universal. Some defenders have even dragged teammates into position by the neck:

Ruben Dias dragged Zinchenko into position from his neck 🤣

Qatar 2022, though, is the first World Cup at which it’s ubiquitous.

The spread has largely banished under-the-wall free-kick goals to the past. There is, for now, no downside to lying behind the wall — until a savvy coach or player devises a set play to take advantage of it. 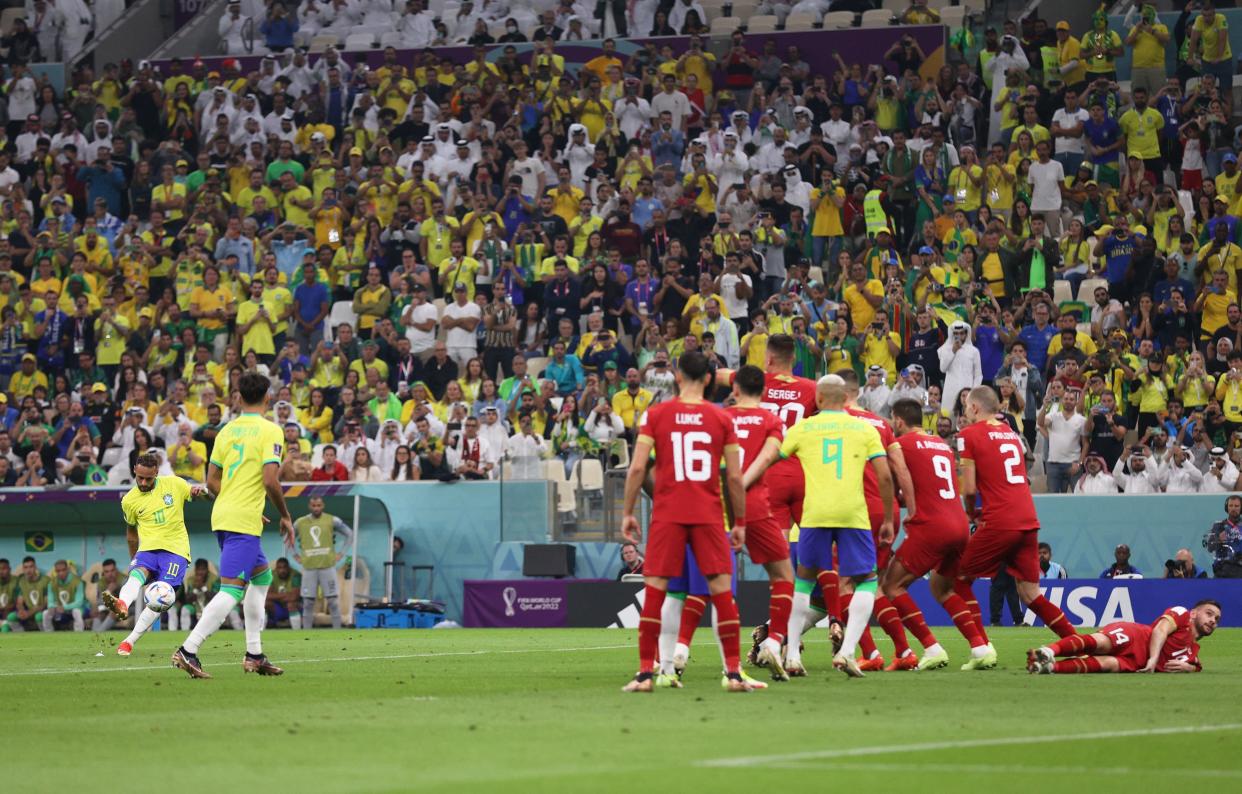