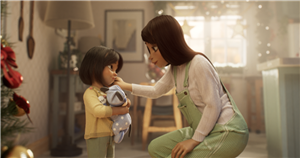 'Tis the season when your TV will be bombarded with festive adverts as firms begin the race to bag the title of best Christmas commercial.

And Disney started strong with their Christmas advert for this year as they focused on the importance of being together during the festive season.

Released today, "The Gift" is a powerful story about family togetherness and this time preparing for Christmas and the arrival of a new baby.

The animated ad will act as the final instalment of Disney’s "From Our Family To Yours" festive shorts, which has focused on the importance of family and being around loved ones during the festive season.

"The Gift" is the sequel to last year's second part of the series, called "The Stepdad", – and Disney’s first-ever Christmas advert "Lola" was released in 2020 and acted as the first instalment of the series of short films.

In the first instalment, fans were introduced to Nicole and her grandmother, Lola, and watched how their bond deepened as festive traditions were passed down through the generations. It tells how a Mickey Mouse toy was gifted to Lola as a child by her father in 1940 and symbolises her relationship with her granddaughter.

The doll was available to buy online with money going to Make-A-Wish, which helps fulfil the wishes of critically ill children.

"Lola" was followed by "The Stepdad". The short film features a grown-up Nicole, the granddaughter of Lola, and her two children Max and Ella, as new step-dad Mike moves into their family home.

Double Grammy Award winner Gregory Porter performed an emotive rendition of the original track "Love Runs Deeper" – penned for the advert, which provided a musical narrative to the film through the eyes of Mike in lieu of any dialogue.

Both the 2020 and 2021 adverts reached more than 184million views worldwide combined, according to Disney.

This year, the family prepare for another festive period and the touching arrival of a new baby. At the heart of the story is a beloved glow-in-the-dark Mickey Mouse soft toy, which connects both past, present and future.

The glow-in-the-dark Mickey Mouse is already for sale online and customers can bag it for £19.99.

Whilst the elder brother, Max is first shown giving Ella the Mickey Mouse to comfort her at night, Ella then gifts the soft toy to her newborn sibling at their first meeting, welcoming them to the family.

The soundtrack featured in the ad is performed by Jessica Darrow who was featured in the animation studios’ Oscar-winning 2021 film Encanto. Jessica is best known for voicing Luisa Madrigal in the feature film and sings "A Little More" in the ad – which was penned exclusively for the advert.

This campaign supports long-standing partner, Make-A-Wish, helping the charity to create life-changing wishes for children with critical illnesses that can be an important part of the healing process.

Sarah Fox, vice president of marketing and comms, at Disney EMEA, said: "For the last three years millions have watched our characters in our 'From Our Family To Yours' animated series, as they spend time together building connections and making memories.

"We are truly grateful for the support we have received for this festive campaign and hope that families and fans enjoy this fitting, heart-warming final instalment of the trilogy."