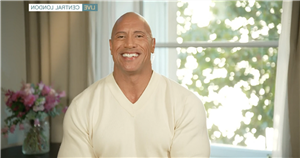 Dwayne ‘The Rock’ Johnson paid a special tribute to his pal Alison Hammond on Tuesday's This Morning, interrupting his own interview to give the national treasure a big congratulations for “doing so great”.

Dwayne, 50, was speaking to hosts Dermot O’Leary and Alison, 47, about his new film Black Adam, and opened the chat with “Good morning to my ex wife Alison,” referencing the pair's spoof marriage on This Morning back in 2017.

When the chat ended, Dwayne asked his publicist off screen if he could extend the interview to speak especially to Alison.

They agreed and Dwayne said: “I just want to say this really quickly, Alison, I want to tell you, we've known each other for a long time – I’m so happy for you.

"I know you’ve been doing so great," he continued. "You’ve been nominated for all these National TV Awards, you’ve been incredible so ‘mwah’. Congratulations! We’ve got to get married again!”

Alison replied: “I’m so proud of you as well” and made a heart shape with her hands.

After the break, Dermot turned to Alison and said: “Can we just have a moment? ‘I’ve known you for a long time'.

“Dwayne Johnson said that to you! What a great moment that was. Wasn’t it great?”

A very happy Alison replied: “It was so exciting!”

Alison received praise this week after the star-studded National Television Awards where she was nominated for Best Presenter.

Alison was up against Ant McPartlin and Declan Donnelly for the accolade.

Seizing her chance when This Morning took home the award for Best Daytime Show, Alison took to the stage and was encouraged by Holly Willoughby and Phillip Schofield to say a few words of her own.

To the delight of the audience at home she joked: “We all know I should have won one of these as well. You know what, [nominees] Bradley Walsh, Graham Norton and the legends that are Ant and Dec are great, but I should have got one!”

Viewers took to Twitter to express their delight at Alison's candid comment. One said: "So true. Alison Hammond is the People’s Queen with or without votes."

Another added: "Alison Hammond, absolute legend" and a third penned: "@AlisonHammond you was robbed! You totally deserved to win."

This Morning airs weekdays from 10am on ITV and ITV Hub.