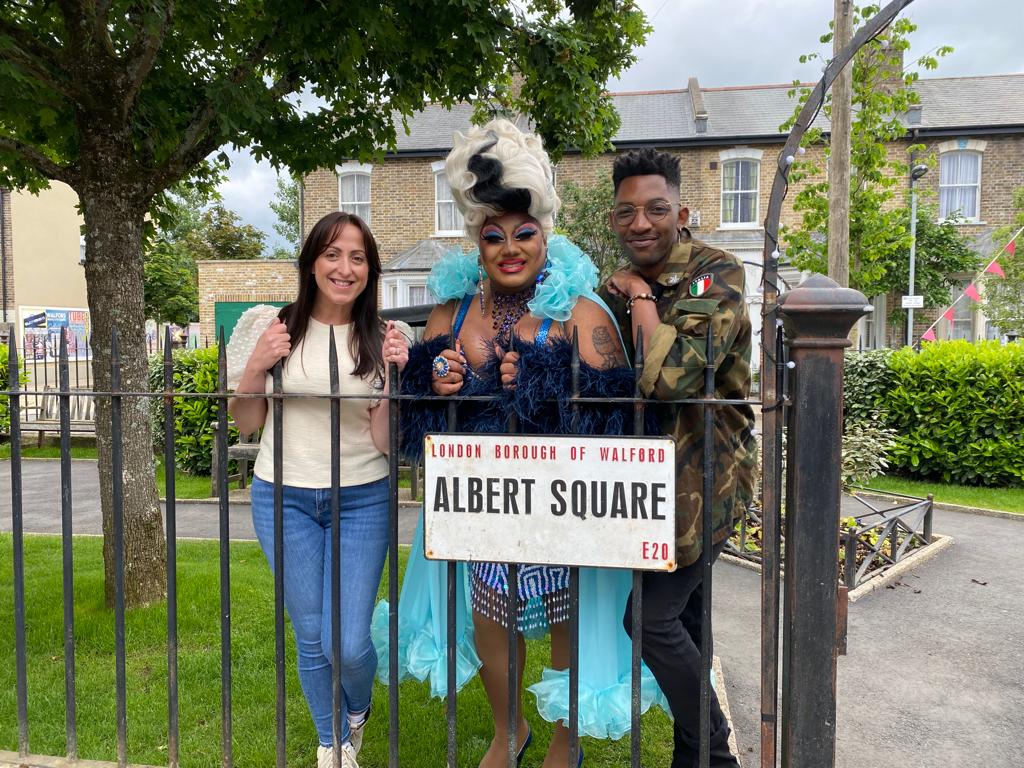 I was basically brought up on all the soaps, so when I got the call that EastEnders wanted to work with me, I was over the moon and so excited.

I’ve grown up watching the show and so many of the actors and characters have inspired me – both as an actor myself and a drag queen. I could only feel honoured that they thought of me.

I was on the iconic set because EastEnders has introduced a recurring character – Felix Baker (played by Matthew Morrison) – who does drag under the alter-ego, Tira Misu. I think this is fantastic!

I was brought in as a mentor to help Matthew find his inner drag goddess and help him set her free. This was mainly through helpful tips and advice.

A bit of glam and glitter on our TV screen is never a bad thing – even in Walford. I think it’s great to see a queer, black, femme character as a regular on our screen.

Putting the fact Felix is a drag queen to one side, I personally am much more interested in the man behind the drag. I want to learn what his story is and root for him through whatever storylines he may go through.

This is because not only is he representing the art of drag on the show, he is also representing being a queer person of colour, who is also an artist and an activist.

He’s not portrayed or written to be weak, but loud and proud. For me, that is a wonderful thing to see because those voices are usually not heard or have to work harder than anyone else.

If I saw this character when I was younger – especially in the 90s – it would have really impacted me in a positive way.

All of this is why I felt so proud to be invited onto the set of EastEnders to film scenes with their new drag queen character.

The day was actually quite chilled out and relaxed – the most hectic part was peeling myself out of bed at 7am to get my makeup done! Other than that, the day on set was brilliant.

I had some great chats with Natalie Cassidy and Matthew Morrison between takes, a private tour of Albert Square – which was completely surreal – and met a few of the EastEnders cast.

As a fan, it was a great chance to geek out. As an actor, it was great to see how it works behind the scenes.

My involvement was definitely more hands on with Matthew to help him become his drag character and give him some tips of the trade, as well as helping him walk in heels.

He did well, but thank the lord they film from the waist up – those cobbles are a nightmare! I would love to play an actual character on the show one day and cause some trouble in the Prince Albert pub maybe.

I hope the show doesn’t just focus on Felix being a ‘fierce queen’ or the next contestant on RuPaul’s Drag Race UK.

I want to know about the man behind the wig – what brought him to where is now and why he does what he does? Just because a man wears makeup and a wig, it doesn’t mean that he’s not flawed and vulnerable.

I think that’s what EastEnders does well – it creates characters that we root for and fall in love with. That being said, a bit of glam and camp would also make me very happy!

I would also love to see an episode where Felix puts Phil Mitchell and some of the other macho boys on the Square in drag!