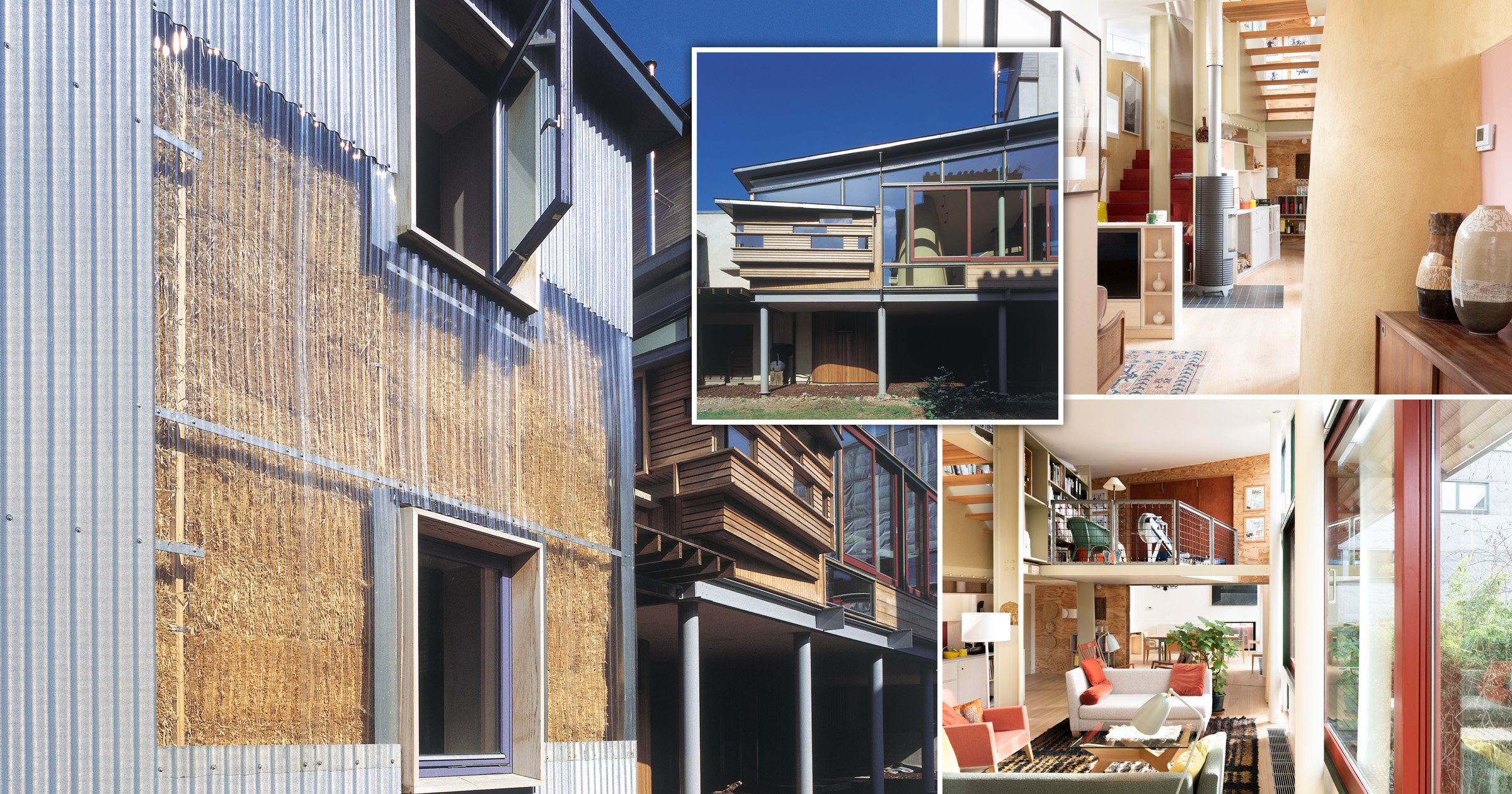 The last time architect Sarah Wigglesworth unlocked her front door for London’s annual Open House Festival, she expected a few people to pop by for a look. There were thousands.

‘We were stunned by the number of people who turned up,’ she recalls of the event two decades ago. ‘We were so overwhelmed.’

Freshly built, her home and office, Stock Orchard Street in north London, had already caused a bit of a stir in the press. This being the turn of the century, the property had been framed as being a bit wacky, partly because of its forward-thinking use of space and appearing as a living patchwork of materials, ranging from recycled concrete in the gabions, straw, railway sleepers, fabric cladding and newspaper.

It was perhaps inevitable that the building, which blends rural principles with modernism on a site formerly occupied by a working forge and before that cattle pens, would be dubbed the ‘Straw Bale House’.

‘We thought people would think we were weird and idiotic,’ she continues, ‘and when I opened the door there was a queue of people – in one afternoon we had about 1,500 visitors.

‘We were totally unprepared, it was raining and the floors were ruined, there were people everywhere. We thought, “We won’t do that again.”’

But never say never. Although the property, which also incorporates Sarah’s offices, has been opened every year in limited numbers, this is the first time it will feature again in the Open House Festival, in time for the event’s 30th anniversary. To prevent potentially huge queues this year, 75 people in three groups will be given tours of both interconnected spaces. This is the first time the public will be invited to view the house since its eco-retrofit was completed in 2019.

The eco-technology aspects have had extensive upgrades, resulting in a 62% reduction of its annual carbon dioxide emissions. The property, which is tucked into the end of a cul-de-sac, was already a step ahead, with a living roof that stablises the temperature within and its own reed bed and pond to purify grey water from the kitchen. The heavily insulated straw bale wall forms a warm blanket wrapped around the north elevations and bedroom wing.

To further improve the eco credentials for the upgrade, air-tightness tapes were installed at floor-wall junctions and around incoming services.

Thermal bridging was addressed by adding insulation and ensuring its effectiveness and underperforming components such as roof lights and windows were replaced to reduce heating demand.

For improved ventilation, existing MVHR units were replaced with  modern products. External shading  was introduced to the south west  elevation of the house to reduce  glare and overheating.

‘I think the property is very much unique to an urban setting,’ says Sarah. ‘It was a bit experimental in its use of materials and used in the way we did.

‘We didn’t want a vernacular building  as might be in a rural area but something very urban. It was unusual in its environmental credentials [but it is] a passive environmental building, isn’t reliant on high technology.

‘It was seen as wacky because of what it looked like, using recycled materials and things. The prevailing aesthetic of the time was thinness and transparent. It does look quite different, much more sensual and tactile than most buildings. You can run your hand on it.’

Has the property’s features caught up in the mainstream? Sarah considers this for a second. ‘I think I would say the tactility side of the building and idea  of recycled materials has become  more mainstream.’

As part of the retrofit, Sarah has taken the unusual step of implementing design elements that addressed the anticipated needs she and her partner Jeremy Till will have as they age. These include installing a carer’s suite, designed to allow the couple to live in their home for as long as possible.

A level-access shower was installed in the bathroom, with grab rail put in the bath surround, and handrails were added to the stair and bridge balustrade. The gas hob was removed and replaced with an induction hob and the below-worktop oven was swapped for an eye-level one to avoid bending down. Sarah is pragmatic about old age rather than relying on someone else to take care of her future.

‘People should do it more in their 60s so they are ready for the eventuality of something going wrong. Being alert to it is a really good idea. You make [your future] the way you want it, rather than being thrust into something wholly unfamiliar.’

Even after more than 20 years at Stock Orchard Street, the magic of the property has not worn off – quite the opposite, Sarah loves it more than ever.

‘I think one of the lovely things about living here, you find the really lovely spots you can inhabit at different times of day and year and that is delightful to explore.

‘The moments the sun hits something and illuminates something on a shelf for example, those moments are fantastic and make it ever more enjoyable.’

Open House Festival: How to get involved

London’s iconic buildings are world-renowned and the Open House Festival is a two-week celebration of the capital’s homes, architecture and neighbourhoods. You can get inside to explore some of London’s great buildings for free, as well as some of its best kept secrets – there are also bridges, mosques and even the Bank of England in the programme.

This year is the 30th birthday of the Open House Festival and there are over 700 buildings and landscapes featured as part of the 2022 programme, which runs from Thursday until September 21. Below are some of our recommended visits

Check openhouse.org.uk for the Open House Festival programme and to book tickets.