After being delayed by attacks, U.N. team arrives at Ukraine nuclear plant

A team of international inspectors arrived at Europe’s largest nuclear power plant Thursday despite renewed shelling that underscored fears of a radiation disaster.

Ukraine and Russia traded fresh accusations that the other was endangering the United Nations team, as well as the plant’s nuclear reactors, in a bid to disrupt the risky mission to secure the plant’s safety. But the experts from the International Atomic Energy Agency pressed on despite the fighting.

Russian officials blamed Kyiv for the eruption of fierce fighting around the site. Its defense ministry said Ukrainian troops had attempted a daring amphibious landing in an effort to seize back control of the plant.

NBC News could not immediately verify the claims of either side.

The IAEA confirmed the mission’s arrival at the plant in a tweet, adding that it was there to conduct “indispensable nuclear safety and security and safeguards activities.”

Earlier, the nuclear agency said the mission was delayed on the Ukrainian-controlled side for about three hours.

IAEA Director General Rafael Grossi said the team was aware of “increased military activity in the area” but was pressing ahead with its plan to visit the facility and meet its staff, Reuters reported.

“Having come so far, we are not stopping,” he was quoted as saying.

Grossi said the inspectors would spend “several days” at the power plant, before reporting back to an increasingly alarmed international community. 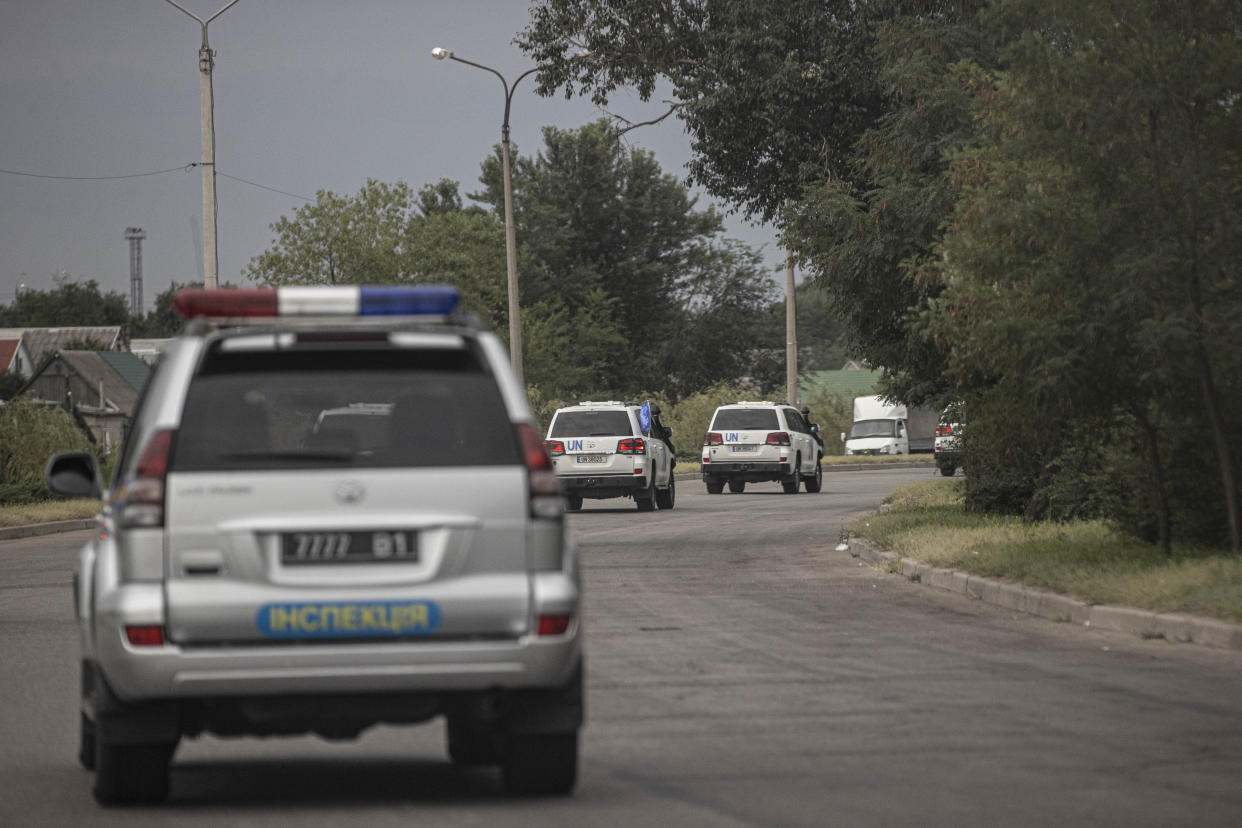 Shelling of the plant itself triggered its safety systems and forced the shutdown of one of its reactors while also damaging the power supply lines, officials from both sides said early Thursday.

Ukraine’s state nuclear agency blamed Russian forces for the shelling, while a local Russian-installed official said Ukrainian forces were responsible. Last week the plant was disconnected from Ukraine’s national power grid for the first time in its 40-year history.

Moscow’s troops were also firing at the route being taken by the inspectors as they set out from the city of Zaporizhzhia — which is under Ukraine’s control — to the nearby plant — which has been controlled by Russian forces since the early days of the war, Oleksandr Starukh, Ukraine’s regional head, said in a Telegram post.

Both sides also blamed each other for shelling of the nearby town of Enerhodar.

“They want to disrupt the visit of the IAEA mission. These are the actions of a terrorist state, which is afraid that the world will learn the truth,” Andriy Yermak, the head of President Volodymyr Zelenskyy’s office, said in a Telegram post.

The Kremlin’s intent was “to blame it on Ukraine,” Zelenskyy’s adviser, Mykhailo Podolyak, also said in a tweet.

But Russia’s defense ministry accused Kyiv of trying to disrupt the IAEA visit. The situation in the area of ​​the Zaporizhzhia plant “is complex,” the ministry added, but remains under “complete control.”

It earlier said that Ukrainian forces had launched a remarkable mission to regain control of the plant.

The ministry said that a Ukrainian “sabotage group” consisting of up to 60 soldiers crossed the Dnieper River separating the two sides and landed on the coast within 2 miles of the plant. It said measures were taken to destroy the group, including using military helicopters.

In the part of Zaporizhzhia closest to the nuclear plant, NBC News saw women and children lined up inside a hospital near the Dnieper River Thursday, waiting to receive potassium iodine tablets.

A sign posted on the wall instructed residents to take the tablets within six hours of a “radioactive cloud” arriving.

Svitlana Groha said health officials doling out the pills instructed her not to take them unless the government issues an official notification of a radiation accident.

Groha, 21, said she feels a “sense of danger about what might happen,” particularly if she has to give iodine to her 7-month-old daughter, Ksenia.

“I don’t know how it can affect my child, what the consequences may be for her,” Groha added.

The head of the International Committee of the Red Cross warned Thursday that little could be done to respond in the event of a major accident at the plant.

“In the event of a nuclear leak, it will be difficult if not impossible to provide humanitarian assistance,” Robert Mardini told a news conference during a visit to Ukraine, Reuters reported. “This is why fighting should stop.”