EXCLUSIVE: Shamed Infowars host Alex Jones is still living the high life as he is seen smooching with his wife at pricey Omaha restaurant just a week after he was ordered to pay almost $50 million to the parents of a Sandy Hook shooting victim

Shamed conspiracy theorist Alex Jones is still living the high life despite being ordered to pay out almost $50 million to families of the Sandy Hook shooting.

The Infowars host proved he isn’t ready to pare back his expensive tastes just because his company has filed for bankruptcy and he claims he is broke. 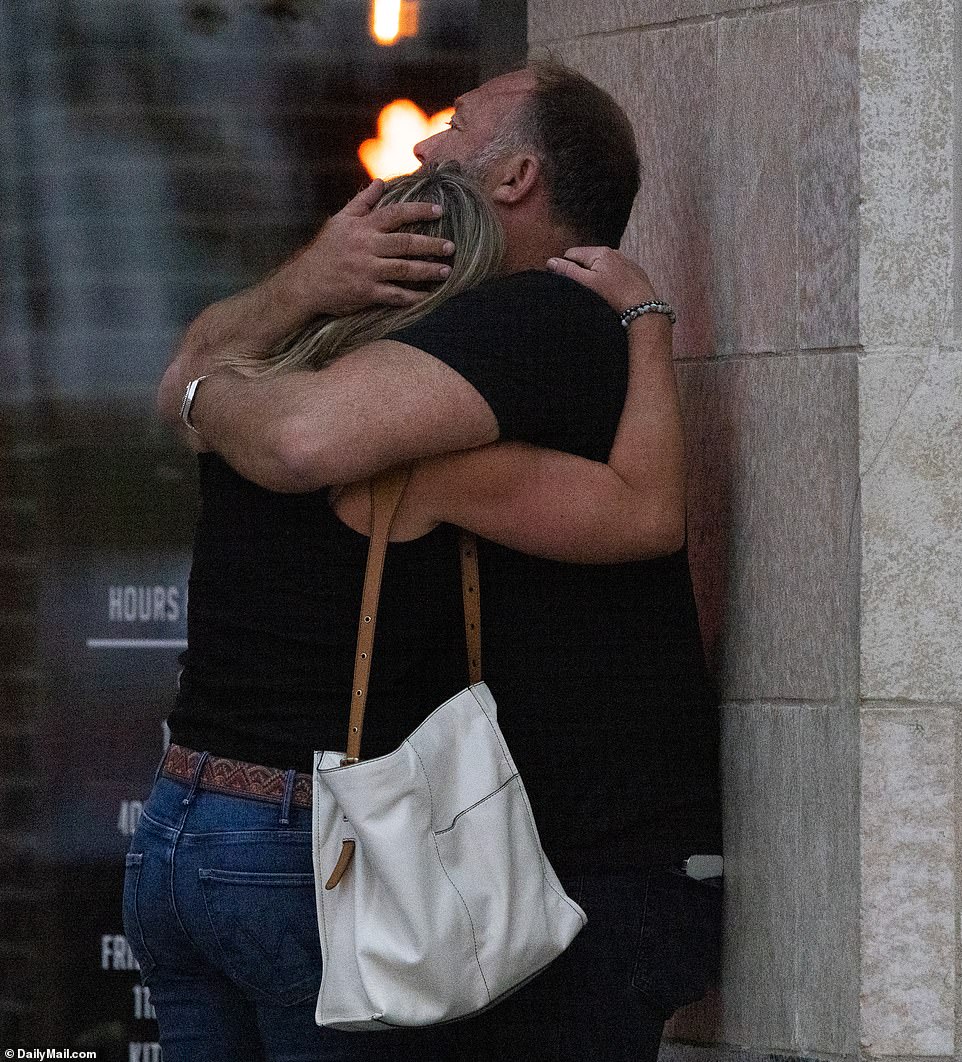 Alex Jones held wife Erika Wulff Jones tight when they left the 801 Chophouse in Omaha, Nebraska for a cigarette break 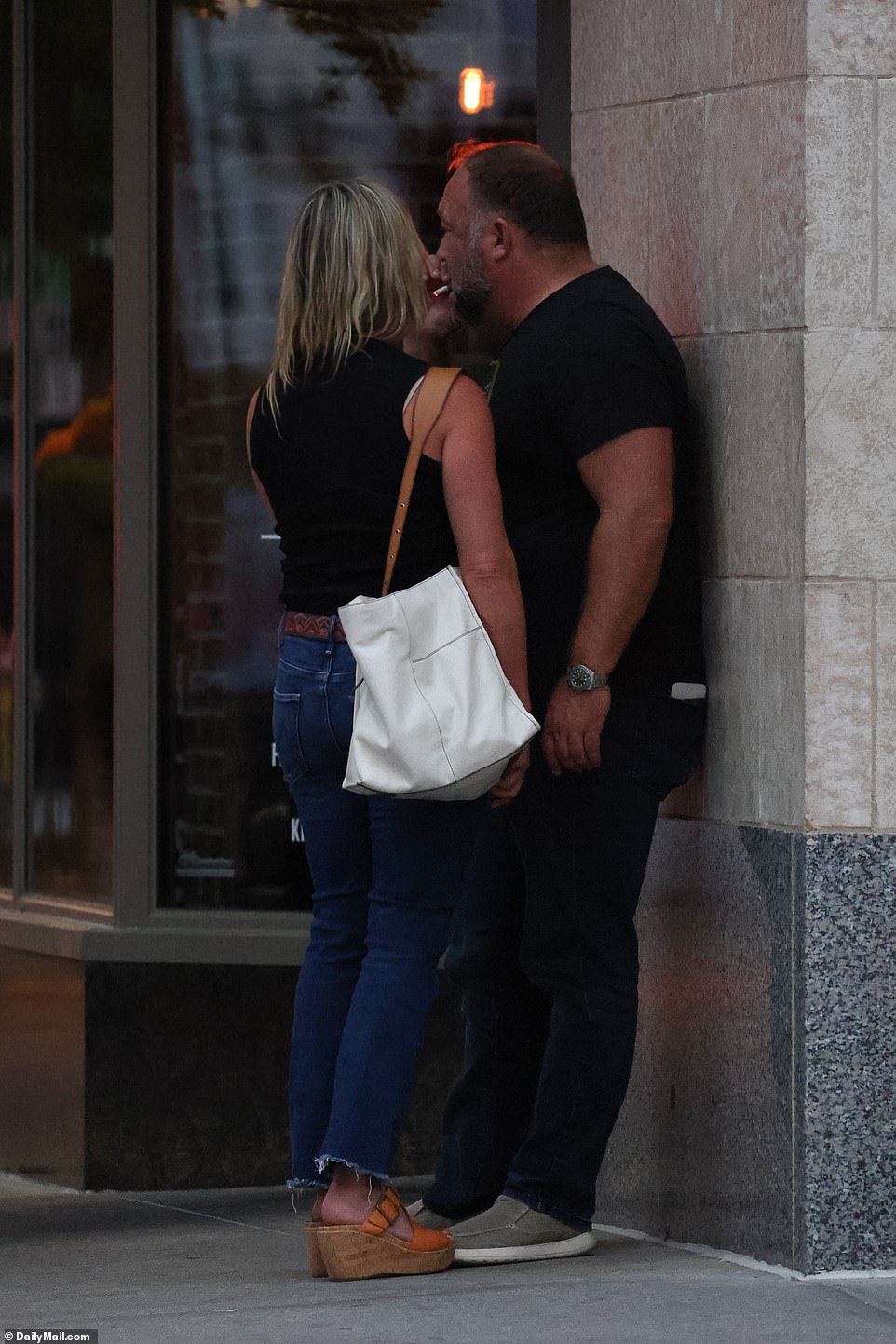 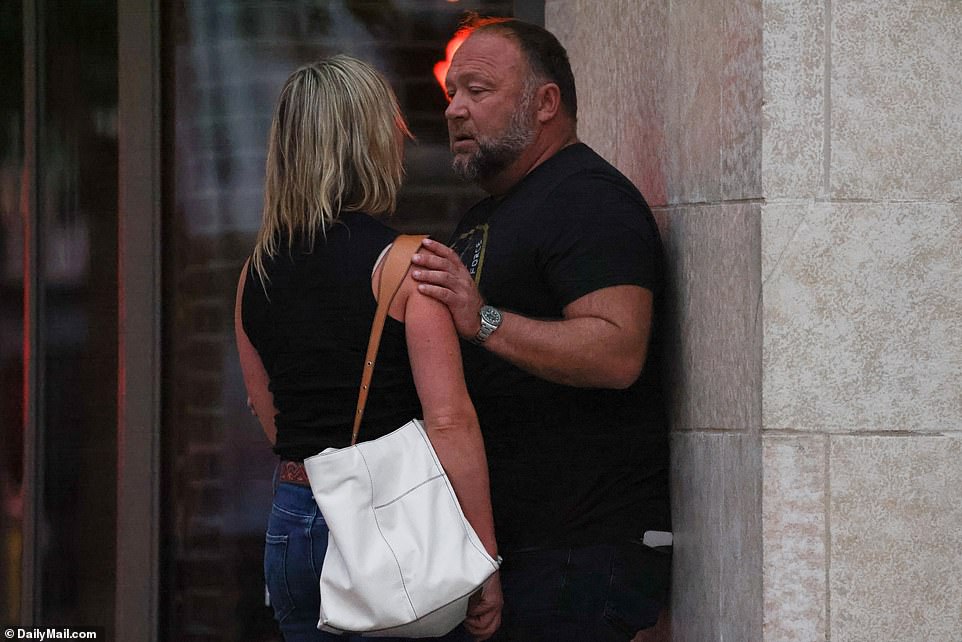 The couple married in 2017. Erika is Jones’s second wife and they have child. He has three children with his first wife Kelly

The couple stayed at the 1920s-built four-star Kimpton Cottonwood hotel, where they regularly spend time when in the area.

And he didn’t cut corners, using a driver to get around town and flashing a Rolex watch on his wrist.

‘When he’s here he always hires a driver and bodyguard. This time is no different,’ one source told DailyMail.com.

On Saturday he, his wife and four friends ate in the pricey 801 Chophouse restaurant downtown, where the least expensive steak on the menu – a single cut prime rib roast – costs $61 while a one-pound A5 Wagyu steak will set you back $560.

A meal there can easily come to $200 per person, not including wine or other alcohol. Scalloped potatoes go for $18 while baked cream spinach costs $15 and a basic wedge salad costs $17.

At one point Jones and Erika, 43, left the restaurant so he could have a cigarette.  Casually dressed in jeans and a black t-shirt, he appeared to be comforting his wife of five years, placing his left hand on her right shoulder. At one point he grasped her with both hands for a full body hug, lovingly putting his right hand behind her head, as he rested her head on his shoulder.

The loving scene was far removed from how the couple, who married in 2017, were acting around Christmas.She spent the holiday in jail after being arrested after she attacked him at their home in Austin. 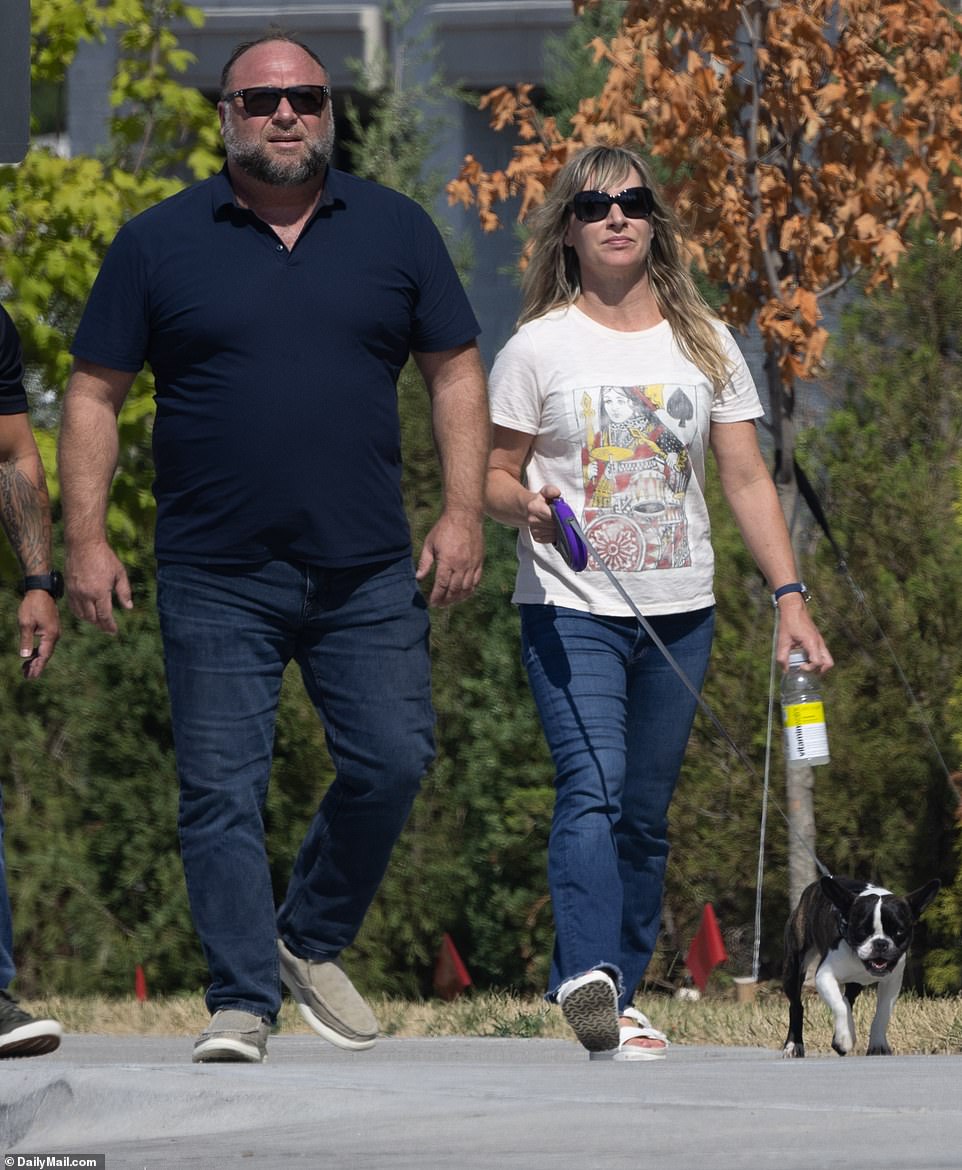 The couple walked their dog on Sunday before visitng West Omaha and Fremont, Nebraska 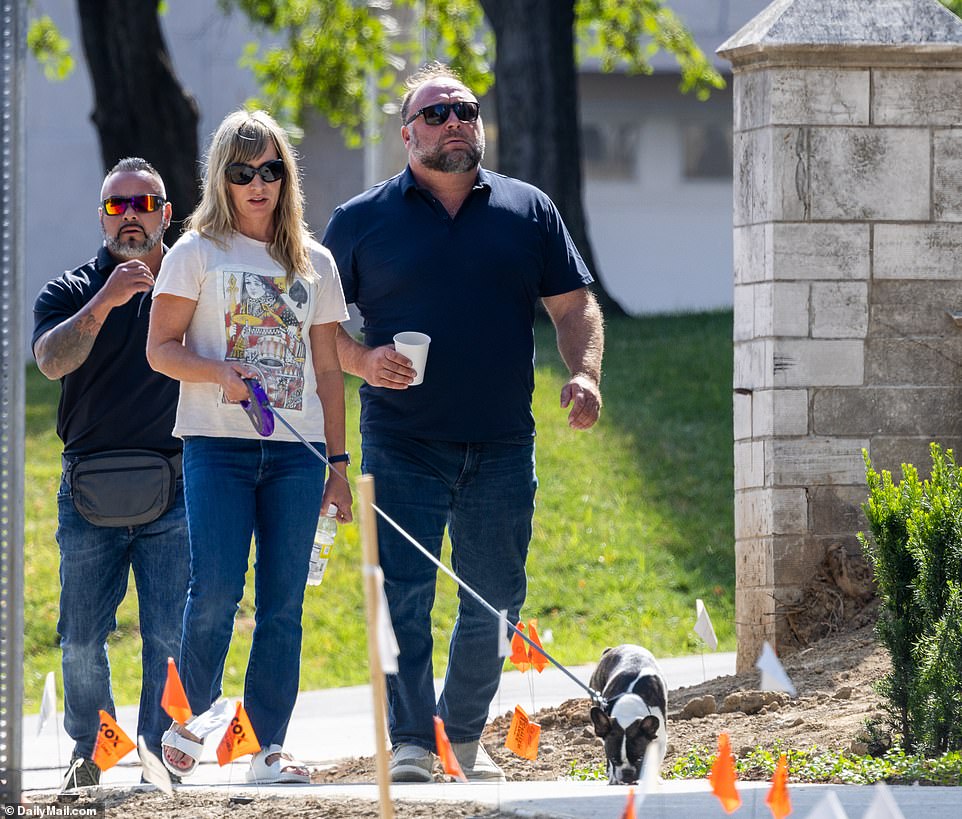 Erika wore a t-shirt with the Ace of Spades on. That card represents intelligence according to cartomancers 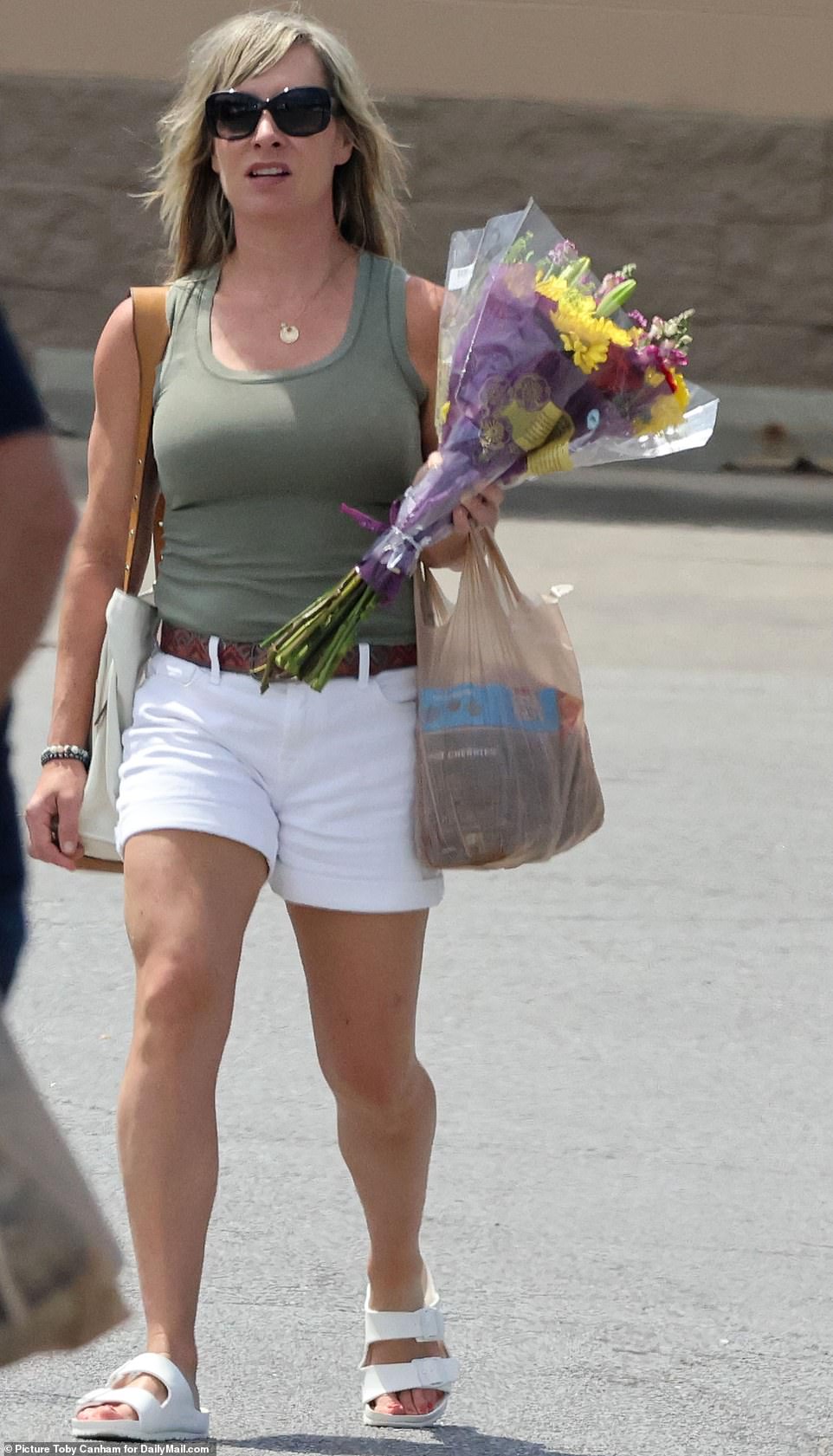 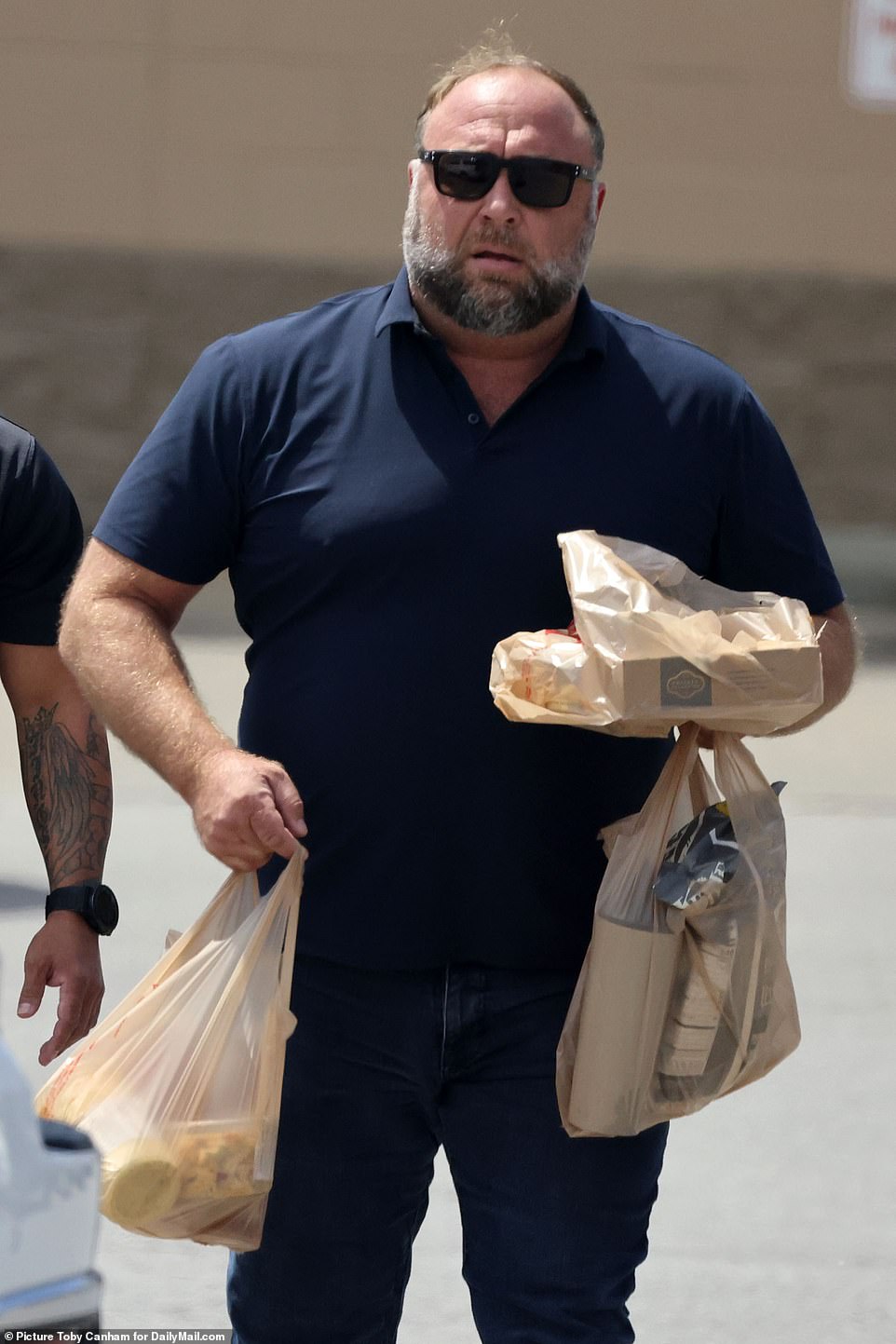 They bought several bags of food from a grocery store 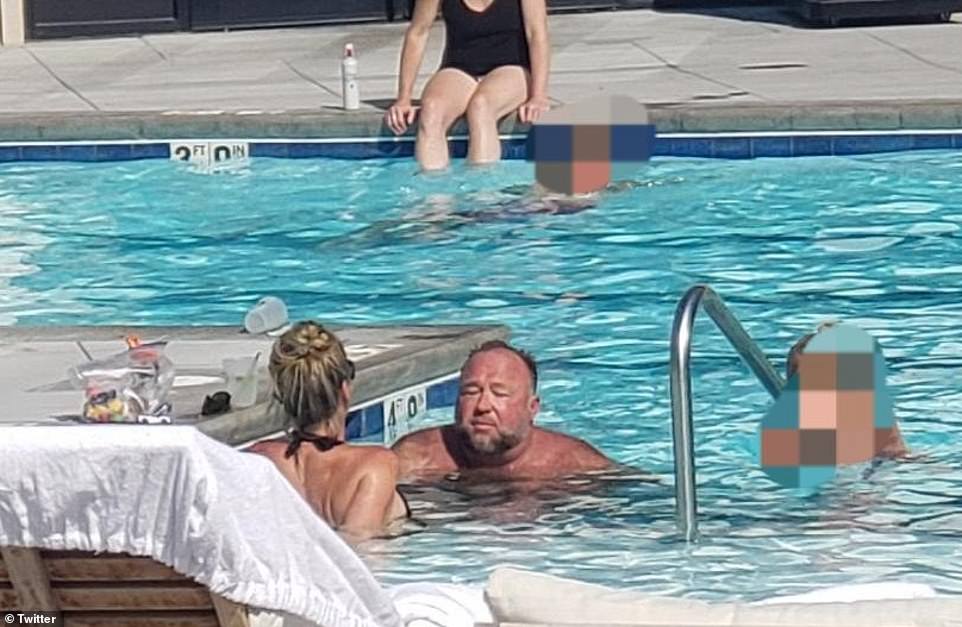 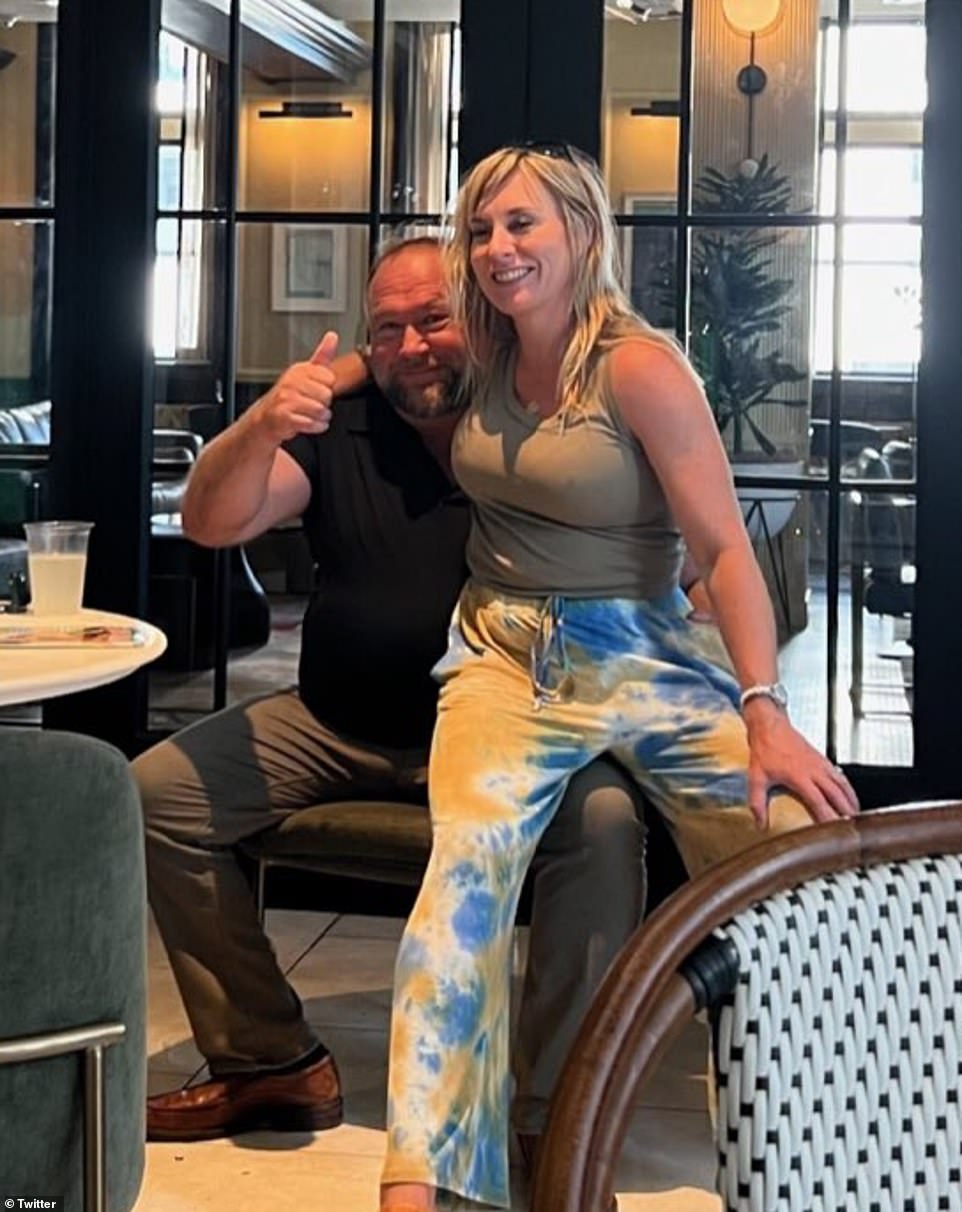 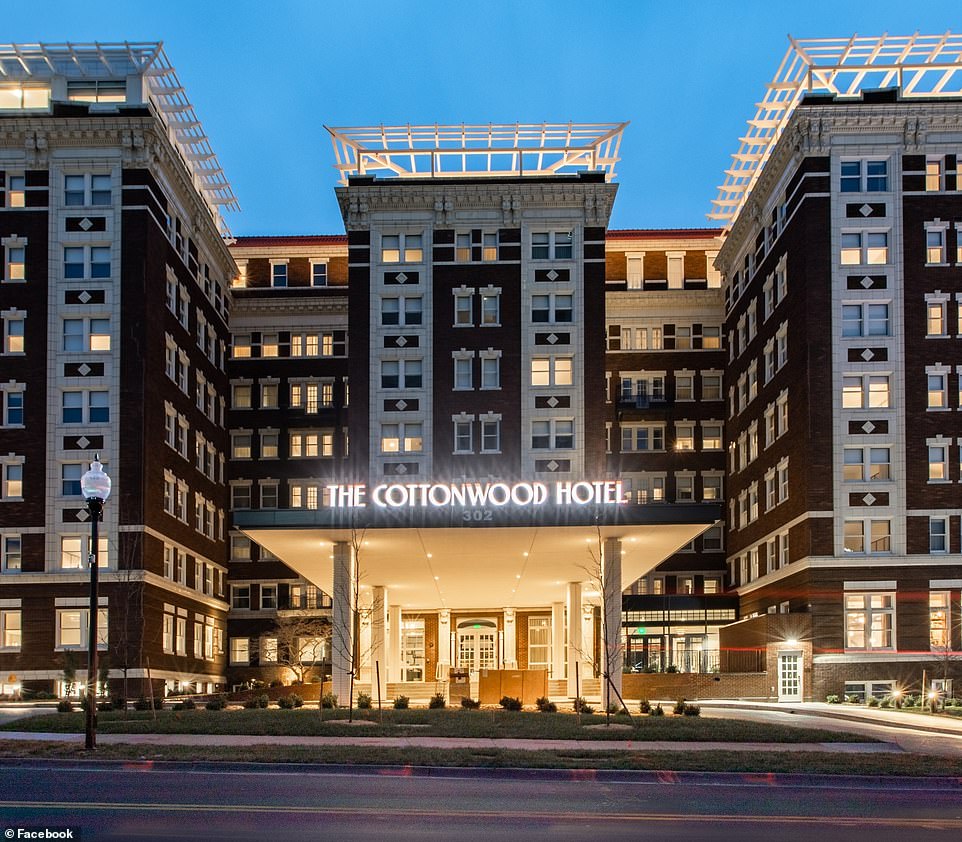 The Cottonwood Hotel, which dates back to the 1920s describes itself as ‘genteel.’ Its website says: ‘We look to our rich heritage to inspire our fresh approach to modern hospitality with a hearty dose of Midwestern charm’ 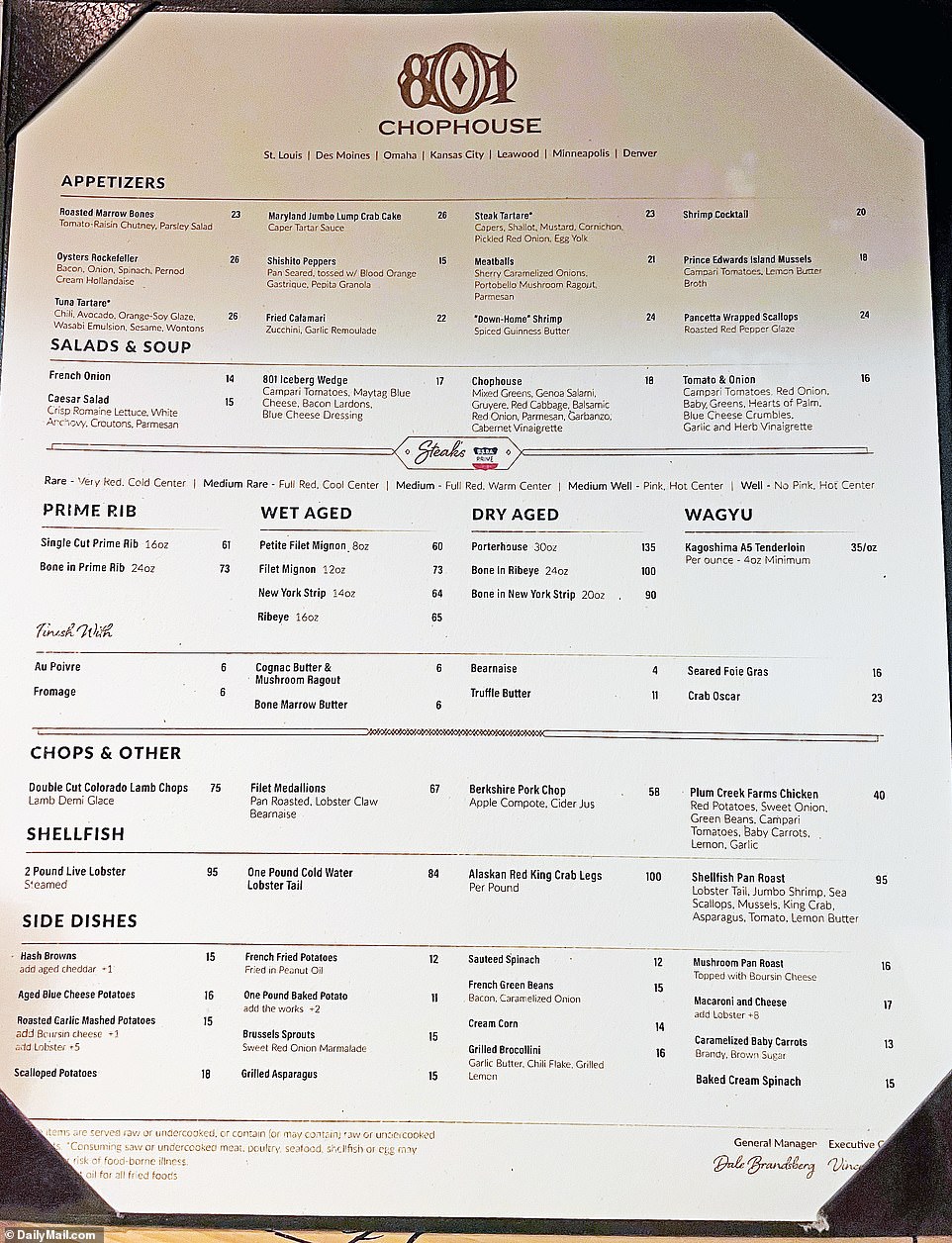 ‘I love my wife and care about her and it appears to be some kind of medication imbalance,’ Jones said at the time.

But he told police he ‘feared for his life’ when she hit him more than 20 times with closed fists, an open hand and a soap bottle

He also claimed she had thrown a five-pound stone ball at his head, missing him by inches.

When he made a 911 call he told the dispatcher Erika had struck him over the head repeatedly and was ‘holding a polished club in her hand’ and attempting to ‘hit him with it.’

The battle was over her claims that he had cheated on her. 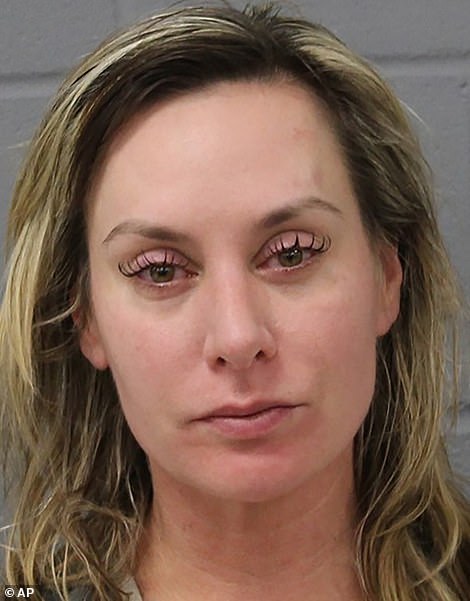 Not everyone in Nebraska’s largest city was pleased to see Jones. Mary LaVelle, who was visiting, confronted him. ‘He’s such a creature of bad things that I just saw him there and thought, “Well, I’m gonna interview him,”‘ she told the Omaha World-Herald.

‘I did make mistakes and so I’ve owned up to that,’ Jones told LaVelle as she pretended to be a journalist.

He also told her he has the ‘right to question things if I want.’

When LaVelle saw one of Jones’s children running around in the hotel, she asked him if the child was a paid actor. He has claimed grieving Sandy Hook parents are really actors paid by anti-gun activists.

Another guest posted a picture of Jones in the hotel pool and then posing for a picture with his wife on his knee.

On Sunday Jones his wife and bodyguard went out for a morning walk around the neighbor at his mid-town hotel with their dog.

Jones once again dressed casually in a short sleeve blue button up shirt, jeans, tennis shoes, and sunglasses. Erika wore jeans, runners, sunglasses and had a on a t-shirt with a print of the Queen of Spades.

After taking their dog back up to their room Jones, his wife and bodyguard ate brunch at the hotel.

At 12:30 pm they all got into the SUV and drove to a local grocery store where they bought several bags of food, what looked like deli items, soups, pie, spreads and chips. Jones’s wife had a bouquet of flowers in her hand as she left the store.

From there they drove to an apartment complex in West Omaha and picked up a few people, he then jumped into a silver Toyota Camry with his wife and sped off to Fremont, Nebraska, 35 miles west of Omaha. 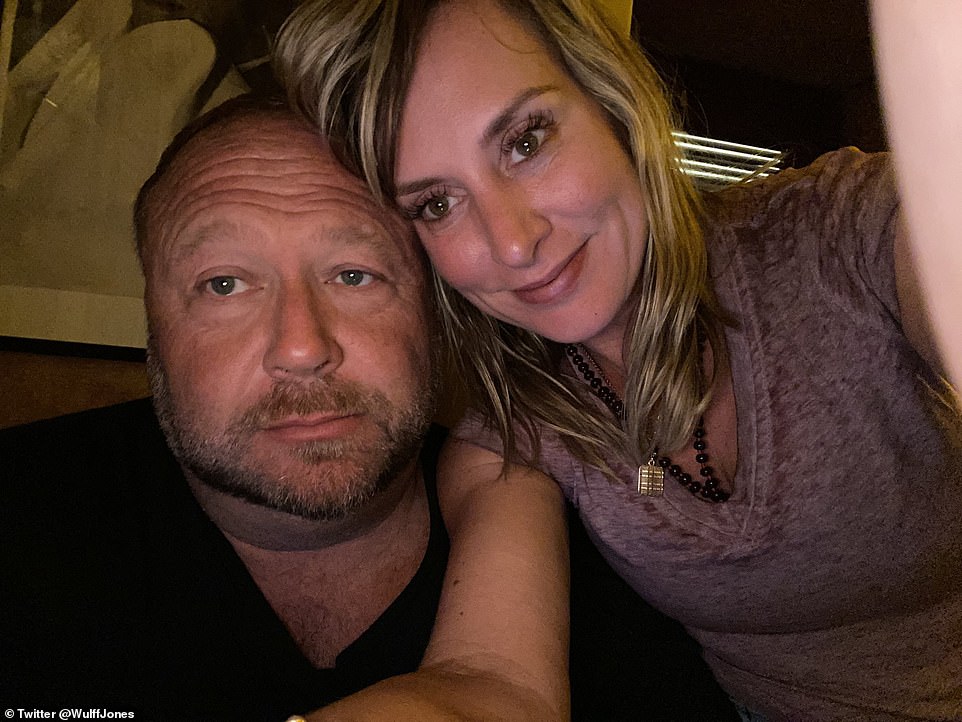 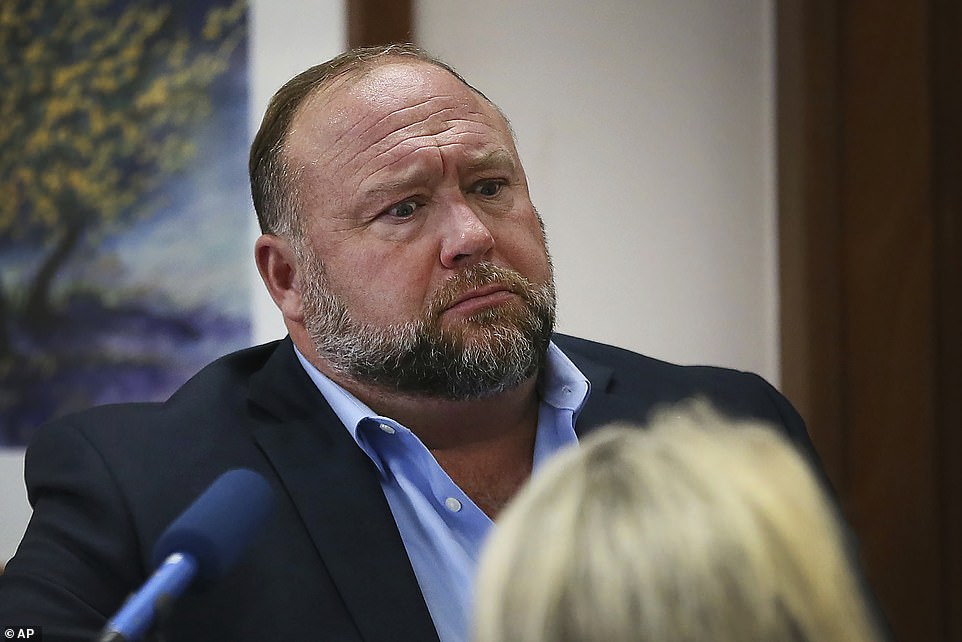 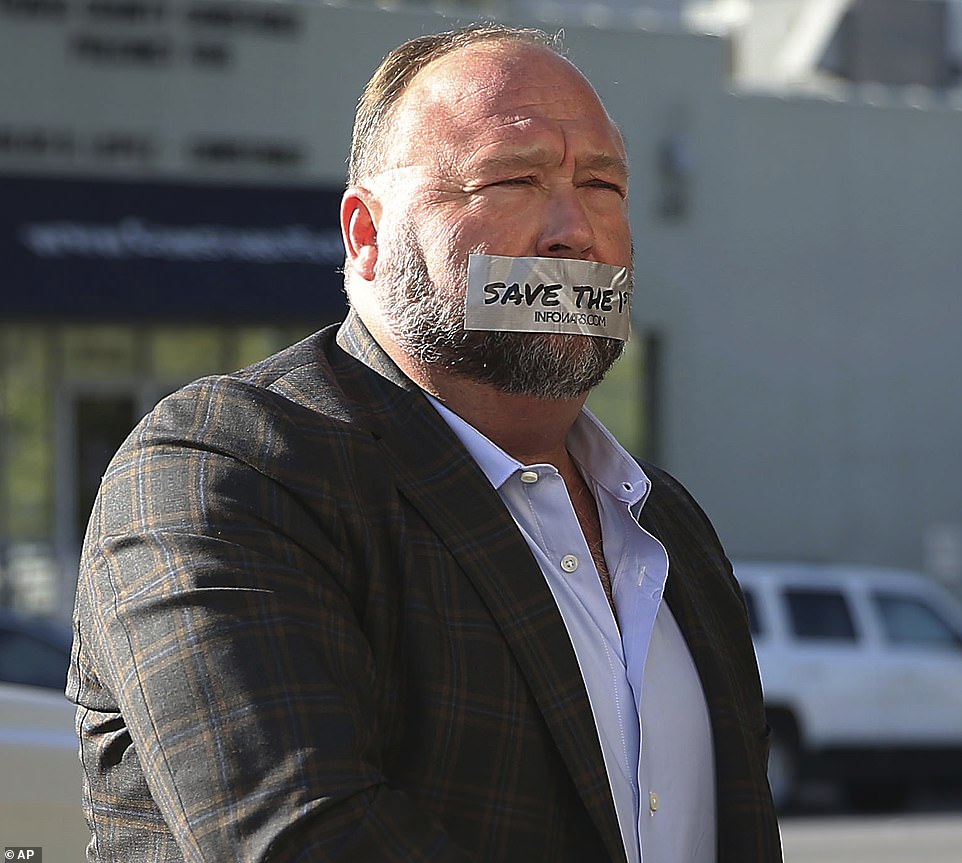 Jones claimed the trial was a way for others to attack his Freedom of Speech. He arrived at the Texas court on July 26 with a piece of tape over his mouth that read ‘Save the 1st’ Amendment

Jones was ordered to pay $45.2 million in punitive damages to the family of slain 6-year-old Jesse Lewis, one of the 26 people were shot dead in the Sandy Hook massacre in 2012 after a jury in Auston, Texas, found he had defamed them.

That’s in addition to the $4 million in compensatory damages he was ordered to pay to Neil Heslin and Scarlett Lewis.

Jones will likely pay only a fraction of the amount and could end up owing as little as 10 percent. An attorney for the parents believes the damages will likely be capped at $4.5 million, however Jones’ lawyer predicts it could be even less.

Attorney Federico Andino Reynal, who represented Jones, said in court Friday that he will seek to reduce the $45.2 million punitive damages award because it does not comply with Texas law. 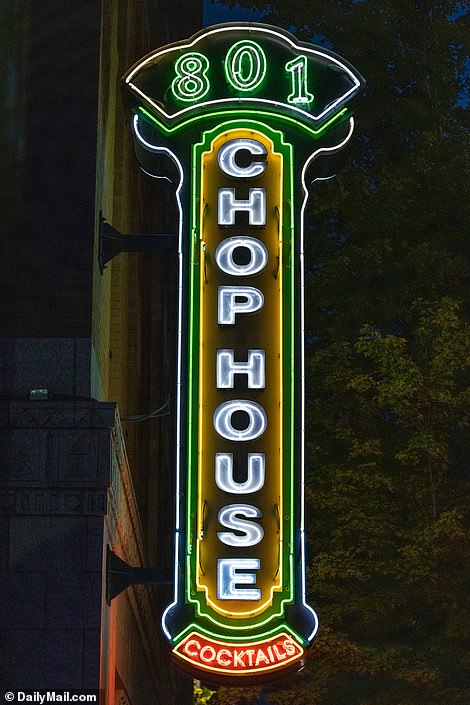 Jones his wife and four friends dined at the 801 Chophouse, one of Omaha’s most expensive restaurants

While juries have broad discretion on awards, states law caps punitive damages at $750,000 when economic losses are not involved, as in this case.

Judge Maya Guerra Gamble, who presided over the case, must approve the final amount, a decision that is expected soon.

But Jones still has more legal woes ahead. A similar defamation case in Connecticut is scheduled to start September 6. A jury has already found he is liable for defamation and the new trial is just to decide how much he has to pay in damages.

The broadcaster was found last year to have defamed Heslin and Lewis by spreading lies that they were part of a government plot to stage the elementary school shooting in Connecticut.

Jones was said to be worth $270 million during the Austin trial. Bernard Pettingill, an economist who was hired by the parents, told the court: ‘That number represents, in my opinion, a value of a net worth. He’s got money put in a bank account somewhere.’

Jones’s first wife, Kelly, the mother of his three older children, earlier this month called him ‘truly mentally ill’ for his insistence that the Sandy Hook attack was fake.

‘He should be protected from himself and others,’ she said during an interview with Inside Edition.

‘He doesn’t have any moral compass. He lives in his own universe, and he is a very — in my opinion — delusional man.’

Jones posted a video on Infowars saying he does not have the money to pay the full award. ‘We are so broke,’ he said before pleading with his followers to send him money.

But that is not how employees at the Omaha hotel found him. ‘He was nice, gracious and a generous tipper.  one told DailyMail.com.

‘He didn’t appear to be broke.’