Charles is the new king, and he has begun by right his reign as King Charles III.

A British king is entitled to choose his own regnal title, but at the age of 73 – the oldest British royal in history to ascend the throne – Charles was never likely to alter the name by which he has been known for so long. 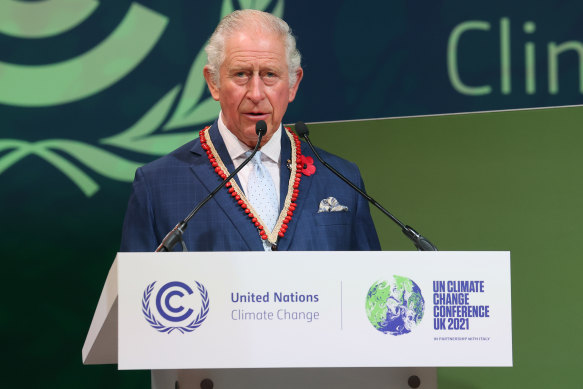 Charles speaks during COP26 in Glasgow in 2021. Credit:Getty Images

Beyond the official appellation, of course, Charles III has an immense task to place his wider imprint on the throne after his mother’s reign defined the very nature of the British monarchy and the United Kingdom itself for generations – indeed, as long as most people can remember.

Royal watchers in Britain have reported Charles wants to reduce the core public face of the monarchy to himself and his wife Camilla, the woman who has supported him through every storm in his life and who will now be known as Queen Consort.

Working alongside them will be his son and heir Prince William and William’s wife Catherine.

Whatever the speculation about the new-look “firm”, Charles’s long and well-known dedication to environmental causes will certainly mark out his reign. 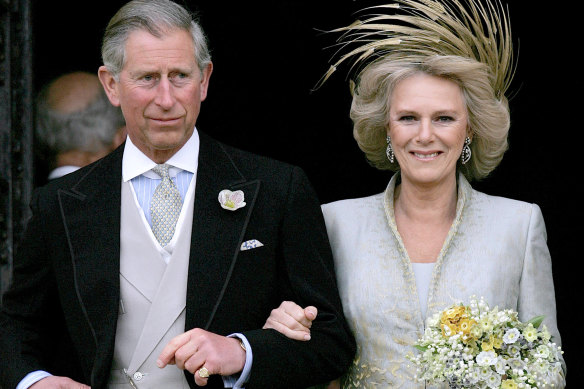 Charles and his bride Camilla leave St George’s Chapel in Windsor after their wedding on April 9, 2005.Credit:AP

His efforts to promote the environment, which once saddled him with a reputation as an oddball (he shakes the limb of every tree he plants and wishes it well), now make him unusually suited to the times.

A green King Charles is likely to be welcomed in a period when tackling climate change has become a top priority of most advanced nations, and when the subject is regularly first on the list of concerns for younger generations.

At the recent COP26 climate summit in Glasgow, the then-European correspondent of The Age and The Sydney Morning Herald, Bevan Shields, witnessed the US Secretary of State, John Kerry, answering a mobile phone while walking in to his hotel. “Hello your royal highness, how are you?” he said warmly. The future king was clearly ensuring his voice was in the ear of the most powerful climate decision-makers.

Charles himself uses electric vehicles on his estates, has placed solar panels on his residences, heats one of his homes with biomass from fallen timber, has installed heat pumps at others and has had a hydroelectric turbine placed in the river that runs beside Birkhall, his home on the Balmoral estate in Scotland.

His favourite vehicle, an old Aston Martin, has been modified to run on 85 per cent bioethanol derived from “surplus English white wine and [fermented] whey from the cheese process”.

Less enthusiastic about King Charles will be modernist architects.

Charles has made known for decades his disdain for much contemporary architecture. In 1985, he killed a plan for an extension to the National Gallery in London, describing it as a “monstrous carbuncle on the face of a much-loved and elegant friend”.

Later he dismissed a proposed redevelopment of a square next to St Paul’s Cathedral by saying “you have to give this much to the Luftwaffe, when it knocked down our buildings, it didn’t replace them with anything more offensive than rubble”.

In return, some modernist architects have poured scorn on Charles’s own housing development: a village called Poundbury in Dorset, that design critic Stephen Bayley once likened to the furniture floor of a provincial department store.

Charles, however, appears immune from derision about his ideas for sustainable housing.

He is also believed to have planned what might be called a sustainable monarchy: one that is slimmed down for a time when many Britons are facing a period of austerity.

Filling out a new-look firm of working royals, beyond King Charles III and his Queen and his heir and his wife, would be Charles’ brother Edward and wife Sophie (the Duchess of Wessex) and the King’s sister Anne, the Princess Royal.

Notably absent would be Charles’s second son, Harry, and wife Meghan, who have essentially resigned from royal duties and moved to the US, and the King’s other brother, Andrew, who is in disgrace after allegations he was a beneficiary of Jeffrey Epstein’s sex trafficking of underage girls.

Minor royals – the so-called “hangers-on” – could find themselves looking for new careers and homes as Charles seeks to reduce the financial call on the royal estate.

Charles is far from hard up, of course. He is independently wealthy, drawing as Duke of Cornwall many millions of pounds each year for his family and his projects from the immense Duchy of Cornwall, a private estate established by Edward III in 1337. Now that Charles is King, Prince William becomes Duke of Cornwall.

The Duchy spreads over 52,789 hectares across 21 counties, and comprises farms, residential and commercial properties, forests, rivers, quarries and coastline.

Little wonder that in the 1970s Charles was regularly described as “the world’s most eligible bachelor”.

And yet, though he has been “heir apparent” since his mother, Queen Elizabeth II, ascended the throne in 1952, Charles’s life and achievements to date have been overshadowed by her long and overwhelmingly popular reign.

His efforts to forge independence started poorly when, aged 14 on a school excursion to the Scottish Isle of Lewis, he ordered a cherry brandy in a pub, observed by a reporter. The moment became a worldwide sensation.

His monumental effort to please the royal family by marrying, at age 32, a beautiful young woman named Diana, 13 years his junior, ended in worse disaster.

Charles, Diana revealed publicly, had maintained an affair with a married woman, Camilla Parker-Bowles. Divorce ensued and Diana, forever the public’s sweetheart, was killed in a car crash in Paris in 1997.

Charles and Camilla have been married since April 2005.

Over the long years of their post-Diana relationship, the reputation of both has undergone significant renovation.

Subsequently, Bolland was credited with having improved the public acceptance of the relationship between Charles and Camilla.

King Charles – formerly known as the Prince of Wales and Duke of Edinburgh since the death in April 2021 of his father, Prince Philip – and Queen Consort Camilla, who was previously given the title of Duchess of Cornwall to avoid any unfortunate overlap with Diana, the Princess of Wales – now enjoy a form of broad approval in Britain that once seemed impossible.

Even Australians appeared to thaw when Camilla made her first visit with Charles in 2012.

This was quite a step, for Diana had established enormous and lasting popularity when in 1983, accompanied by Charles and their baby William, she made her first official visit to Australia.

Two decades later, Camilla’s quick wit and easy-going nature earned surprised plaudits wherever she went in Australia, and the Palace is said to have breathed sighs of relief. 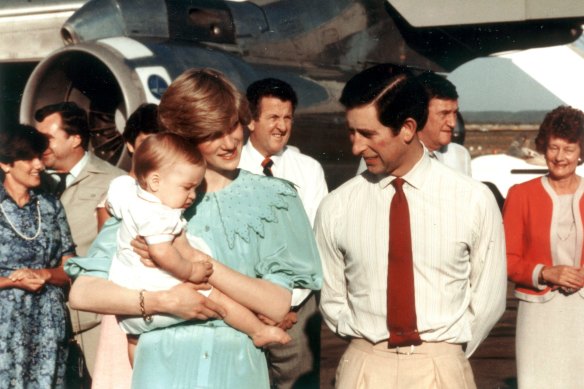 That she had passed muster in Australia was important because Charles as King takes over from his mother as the Head of the Commonwealth, an association of 56 nations, almost all of which are former territories or colonies of the British Empire.

Australia, among the most developed of those nations, has an influential voice in the Commonwealth’s sometimes turbulent affairs. The new King and his consort will look to Australia as a reliable pillar when things become complicated.

It was thought until recently it would be unlikely that Camilla would be given the title of Queen.

Instead, under an agreement struck at the time of Charles and Camilla’s somewhat controversial marriage, Camilla was to be known as Princess Consort.

However, the intervention of Queen Elizabeth II on the 70th anniversary of her ascension to the throne has changed all that.

In her official message to mark her platinum jubilee on February 6, 2022, the Queen declared: “When, in the fullness of time, my son Charles becomes King, I know you will give him and his wife Camilla the same support that you have given me. And it is my sincere wish that, when that time comes, Camilla will be known as Queen Consort as she continues her own loyal service.”

Given that Her Majesty was the only person who could define such royal titles, it settled the matter: Camilla would be Queen.

The message appeared to shift public opinion in Britain, where support for Camilla as Queen had been no more than lukewarm since her marriage to Charles in 2005. A survey of 1054 adults by JL Partners for The Daily Mail on February 8 found 55 per cent of people wanted Camilla to be known as queen consort compared with 28 per cent who said she should not and 17 per cent who did not know.

Meanwhile, Charles’s, having chosen to be known as King Charles III, will rise above any association with the two previous Kings of that name.

Charles I, who believed in the divine right of Kings, was executed by beheading in 1649, having been found guilty of treason.

His son, Charles II, who took the throne in 1660, became known as “the Merry Monarch” for the abandoned behaviour of his court. He is thought to have fathered 11 illegitimate children, although he left no legitimate heir to the throne.

For King Charles III, who has spent a lifetime preparing for his role, he will no doubt lean upon Camilla to raise him up.

Receive a wrap of our coverage as the world mourns Queen Elizabeth II in our Morning Edition newsletter. Sign up here.