Animal tragic: Are profit-hungry vets making a killing thanks to besotted owners desperate to keep their pets alive?

Barkley is a lively, sweet-natured six-year-old cockapoo who loves running around the beaches near his home in Hampshire and across the Solent on the Isle of Wight.

His owner, Tamazin Morley, clearly adores her ‘amazing dog’, which makes the terrible story of what happened to him last November all the more disturbing.

After a runabout on the island one afternoon, Barkley found it impossible to lie down. Tamazin took him to a local vet, who identified the problem very quickly.

‘He had a trapped nerve in his neck, a simple issue,’ Tamazin told the Mail. ‘The vet suggested Calpol and the problem went away. But then it came back when Barkley was playing with a friend’s pup.

‘When we got home, our vet referred him to the local animal hospital, Lumbry Park. And that’s when things got much worse — and expensive.’

She says staff at the hospital, in Alton, Hampshire, insisted on doing an MRI and a lumbar puncture, as well as testing the fluid in his joints. 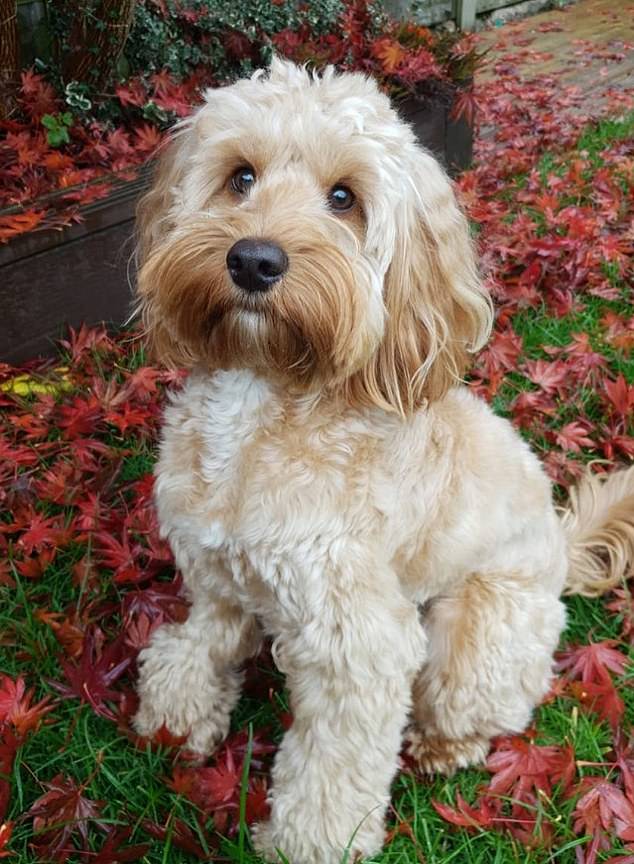 Barkley is a lively, sweet-natured six-year-old cockapoo who loves running around the beaches near his home in Hampshire and across the Solent on the Isle of Wight. His owner, Tamazin Morley, clearly adores her ‘amazing dog’, which makes the terrible story of what happened to him last November all the more disturbing

‘They seemed delighted to hear Barkley was insured for £7,500,’ says Tamazin. ‘That made me feel nervous. That evening, when I picked him up, he was very distressed. More worryingly, his tail, which is normally vertical and curled, was hanging limply.

‘I assumed it was the anaesthetic [animals must be anaesthetised before an MRI to ensure they lie still while it is carried out], but the next day it was exactly the same and he could not hold his urine or faeces.’

Tamazin says she sent a video of Barkley to a senior member of staff at the hospital, who told her there was a serious problem and they would need to do another MRI.

‘I was really worried, as it meant a second general anaesthetic within days, but agreed,’ she says.

According to Tamazin, the second MRI showed that the lumbar puncture had caused a small bleed, which was stopping neurological signals to the brain and rendering Barkley doubly incontinent.

‘They said they were sorry, but they have never admitted liability,’ she told the Mail. ‘They also said that if it didn’t improve in six to nine months, he should be put to sleep. He was only six years old and, until he went into that hospital, he was pretty healthy. I believe it was a needless procedure which left him disabled.’

The hospital would doubtless argue that the procedures Barkley underwent were necessary — but Tamazin is far from the only animal lover who suspects their pet may have been subjected to ‘over-treatment’.

Critics say the veterinary profession has become a dog-eat-dog world, with small practices being swallowed up by giant international corporations only interested in profit.

Figures published last year by the Royal College of Veterinary Surgeons (RCVS) show the majority (51 per cent) of veterinary practices in the UK are now owned by six companies, three of them private equity-owned. Two-thirds (67 per cent) of practices are now combined in ‘groups’ comprising at least three practices.

One chain, Medivet — which is owned by a Luxembourg-based private equity firm — has more than 400 surgeries in the UK. Its obsession with the bottom line was vividly highlighted in a recent annual report when it referred to its vets’ surgeries as ‘CGUs’, or Cash-Generating Units.

Inevitably, equity firm backers will be encouraging vets to offer expensive and complex procedures, including — most controversially — treatments for cancer to prolong a pet’s life, which some argue may not be in the long-term interests of the animal.

Dr Polly Taylor, a senior vet and academic, is a member of EthicsFirst, an international group that campaigns against excessive medical treatment. ‘In many cases, the pets’ welfare is being ignored,’ she says. ‘There is a lot of pressure [from vets] to go for expensive treatments. Advances in technology are playing a part. Amid all the hype of so-called clever treatments, the animal’s best interests are being forgotten.

‘Our recent research has shown that major surgery can have a very traumatic effect on any pet. It’s not like operating on a human being — the poor animal will have no idea what is going on.’

Karen Karbritz’s seven-year-old Labrador, Dusty, was diagnosed with cancer in 2018. First, his spleen was removed and then part of his liver.

‘By the time we got to the Royal Veterinary College hospital [in Hertfordshire] all the insurance money — £4,000 — had been used up, and we probably spent another £10,000 on chemo and natural therapies,’ she says. 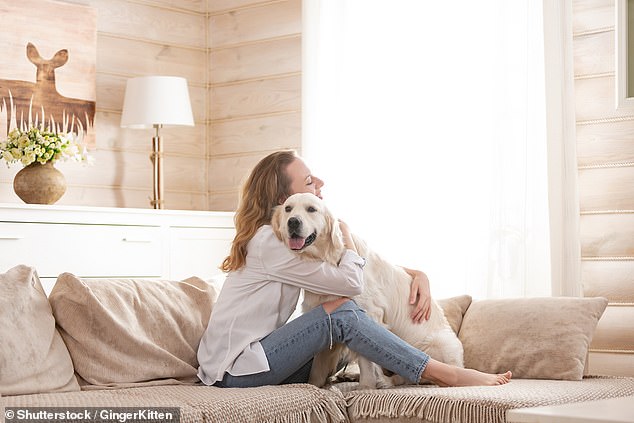 Figures published last year by the Royal College of Veterinary Surgeons (RCVS) show the majority (51 per cent) of veterinary practices in the UK are now owned by six companies, three of them private equity-owned. Two-thirds (67 per cent) of practices are now combined in ‘groups’ comprising at least three practices

‘We were willing to pay, and I suppose it was worth it — they said that he would get two more months. In the end, he lasted another four.’

Karen insists, however, that the college had her ‘over a barrel’ in terms of the cost. ‘There is no transparency,’ she says. ‘There should be fixed rates across the board. In Dusty’s case, the charges kept mounting up.’

When approached about these allegations, a spokeswoman for the RVC told the Mail the college did not discuss individual cases.

While it’s natural for pet owners to want the best for their animals, over-treatment is becoming a major issue.

Some believe this is driven, at least in part, by celebrity vets advocating increasingly complex surgeries. And fees for such procedures are spiralling, too.

The recent entry of aggressive private equity firms into the veterinary sector has had its effect — between 2015 and 2020 vets’ fees on average rose by twice the rate of inflation.

These increased fees have, in turn, pushed up the price of insurance. The Association of British Insurers told the Mail that the average annual premium for a dog is now £269, and this figure is expected to increase by about 6.4 per cent year-on-year.

The prospect of being landed with astronomical bills they can’t afford is leading many owners to simply dump their pets. The RSPCA estimates that four pets are being abandoned every hour and that number is likely to increase this winter.

Chris Deadman, of The Good Vet And Pet Guide, says the acquisition of independent practices by vet chains and private equity firms has caused ‘a genuine diminution of quality and increased complaints from our users. We are also noticing that the vets are ramping up the cost of peripheral treatments such as teeth-cleaning and worm treatment. This is unacceptable.’

Dr Taylor says some of the corporate firms are insisting employees — that is the vets — have to reach monthly revenue targets: ‘And they won’t divulge what those targets might be, even to other professionals. They are sucked into the system and feel gagged by employers.’

Many pet owners report that it is almost impossible to make an effective complaint about over-treatment by vets. The RCVS has a complaints scheme, but vets are rarely struck off.

One who was is Marthinus Ryk Botes, a vet who worked for Medivet in Faversham, Kent. He was struck off after being found guilty of ‘disgraceful conduct’ after performing unnecessary hip replacements on three dogs. The tribunal found that he was motivated by ‘financial gain’. A total hip replacement can cost anything upwards of £3,000.

Neither Medivet nor the RCVS was willing to discuss the case in greater detail, or the more general issue of ‘overtreatment’ for profit. Only about 2 per cent of the cases referred to the RCVS result in a full disciplinary hearing.

The veterinary profession as a whole seems remarkably reticent when it comes to discussing quite legitimate complaints — but the British Veterinary Association (BVA, roughly the equivalent of the doctors’ BMA) does have concerns about ‘overtreatment’.

Malcolm Morley, the BVA’s president, told the Mail: ‘Owners want the best treatment possible for their pets — they are often considered members of the family and losing them can be very upsetting.

‘But when considering treatments, the well-being of an animal should be the top priority. While it may be possible to treat an animal in the short-term, it could prolong suffering. In some cases it may be kinder to put them to sleep.’

Back in Hampshire, meanwhile, Barkley is making the best of his disability; but he has to wear nappies and is heavily medicated. Since he came out of Lumbry Park — which is owned by the multinational CVS Group — his owner Tamazin has spent many more thousands on veterinary care.

She is still furious that Barkley’s injury was caused by the lumbar puncture, something that has been confirmed by a report from the hospital.

The hospital has refused to respond in detail to any of the Mail’s questions about Barkley’s treatment, insisting: ‘We do not comment about specific cases to the media.’

The Mail also wrote to Richard Fairman, CEO of CVS Group, the hospital’s UK parent company, which runs more than 500 veterinary surgeries in the UK, Ireland and the Netherlands. Between them they turned over £554 million in the last financial year.

Fairman, who receives a salary of about £416,000 a year, plus a performance bonus that can amount to as much as 100 per cent of salary, would not answer our enquiries either.

‘The hospital’s silence is shocking, but it speaks volumes,’ Tamazin told the Mail. ‘Barkley went into that hospital with a minor problem and emerged with what may turn out to be a permanent disability. It is outrageous that they can get away with this.’