Seoul: The secretary-general of the United Nations says he is “deeply concerned” by North Korea officially enshrining the right to use preemptive nuclear strikes to protect itself.

North Korean leader Kim Jong-un says there will be no bargaining over the country’s nuclear weapons.Credit:AP

Antonio Guterres, the secretary general of the United Nations said he was concerned by the law and reiterated calls for Pyongyang to return to denuclearisation talks. The UN has long-standing sanctions on North Korea’s nuclear and missile programs.

The United States again said it had no hostile intent towards North Korea and is willing to resume talks without preconditions.

North Korea’s move comes as observers say the country appears to be preparing to resume nuclear testing for the first time since 2017, after historic summits with then-US president Donald Trump and other world leaders in 2018 failed to persuade Kim to abandon his weapons development.

North Korea’s rubber-stamp parliament, the Supreme People’s Assembly, passed the legislation on Thursday as a replacement to a 2013 law that first outlined the country’s nuclear status, according to the country’s state news agency KCNA. 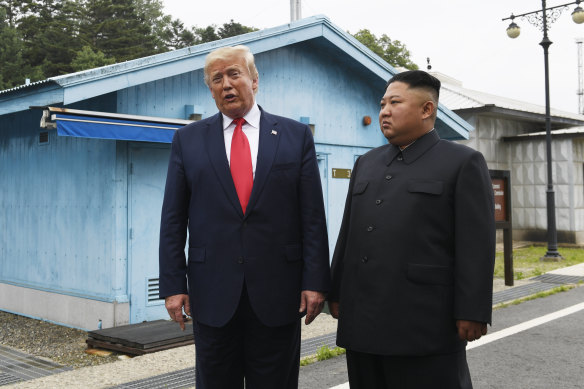 “The utmost significance of legislating nuclear weapons policy is to draw an irretrievable line so that there can be no bargaining over our nuclear weapons,” it quoted Kim as telling the assembly. He added that he would never surrender the weapons even if the country faced 100 years of sanctions.

Among the scenarios that could trigger a nuclear attack would be the threat of an imminent nuclear strike; if the country’s leadership, people or existence were under threat; or to gain the upper hand during a war.

White House press secretary Karine Jean-Pierre repeated past US statements that Washington has no hostile intent toward North Korea.

“As we have said, and North Korean officials, including Kim Jong Un, have publicly noted, we continue to seek diplomacy and are prepared to meet without preconditions. The DPRK continues to not respond,” she said, using the initials of North Korea’s official name.

“The United States remains focused on continuing to coordinate closely with our allies and partners to address the threats posed by DPRK,” she added.

A deputy at the North Korean assembly said the law would be a powerful legal guarantee for consolidating North Korea’s position as a nuclear weapons state and ensuring the “transparent, consistent and standard character” of its nuclear policy, KCNA reported.

Rob York, director for regional affairs at the Hawaii-based Pacific Forum, said spelling out the conditions for use of nuclear weapons was rare and showed how essential North Korea considered them to its survival.