Doctors’ orders: Queen to miss Privy Council meeting after being told to rest

London: The Queen’s doctors have ordered her to rest just one day after appointing the new British prime minister, with her deteriorating health forcing the postponement of a virtual Privy Council meeting.

The 96-year-old monarch broke tradition on Tuesday by accepting the resignation of Boris Johnson and inviting Liz Truss to form a new government in person at Balmoral Castle, in the Scottish Highlands, after Buckingham Palace decided it was unwise for her to travel to London, where the event would traditionally take place. 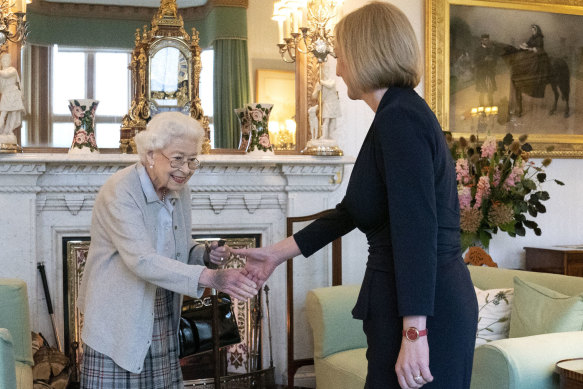 The Queen has been forced to rest following a full day of duties overseeing the handover of power in Downing Street. She is seen here with new British Prime Minister Liz Truss.

The Privy Council meeting had been planned as a virtual event via video link to avoid Privy Councillors having to make the 1600-kilometre round trip from London to Scotland for government business.

During the meeting, Truss would have taken her oath as First Lord of the Treasury and new cabinet ministers would have been sworn into their roles, also being made privy counsellors if not previously appointed.

A Buckingham Palace spokesman said: “After a full day yesterday, Her Majesty has this afternoon accepted doctors’ advice to rest.

“This means that the Privy Council meeting that had been due to take place this evening will be rearranged.”

The monarch remains at Balmoral and the latest advice does not involve a hospital stay.

She was photographed for the first time in months on Tuesday, greeting Truss who became the 15th prime minister of the Queen’s 70-year reign. Wearing a grey cardigan and a pleated Balmoral tartan skirt, she appeared cheerful as she welcomed Truss. She held a walking stick as she leaned forward to shake hands.

Royal commentators said that a prominent bruise on her right hand was likely to reflect a benign condition of old age rather than a result of a fall or any other incident.

About 10 per cent of people over 50 will have “senile purpura”, also known as Bateman purpura. This means that they bruise easily after minor bumps as the skin and blood vessels become more fragile.

For most of the year, she has endured ongoing “episodic mobility issues” that are reported to have worsened over the past few weeks.

As head of state, it is the Queen’s duty to appoint the prime minister to lead the British government.

She has been taking her traditional summer break in Scotland with family and guests. She usually stays at the estate from August to October.

During the past seven months, the palace has opted to confirm the Queen’s attendance at public engagements on the day, depending on how she is feeling.

During this period, she has missed several high-profile engagements, including the state opening of parliament, a Platinum Jubilee concert and a commemorative Derby Day at Epsom Downs racecourse.