Four fans have sued the Washington Commanders and stadium contractors at FedEx Field for negligence after a railing collapsed following a game between Washington and the Philadelphia Eagles last season.

In the lawsuit, which was filed Friday in a federal court in Maryland, the fans – Andrew Collins, Morgan French, Michael Naimoli and Marissa Santarlasci – claim they are still receiving medical treatment for the injuries they sustained after falling onto the field, including muscle strains, cuts and contusions.

The fans, all of whom reside in New Jersey, are seeking compensatory and punitive damages.

The lawsuit names the team, the related business entity that owns the stadium and a company that provides security and crowd management services for Commanders games as defendants.

“Defendants knew, or should have known, that extreme pressure (from the weight of leaning fans) would be placed on the railing between where the fans, including the Plaintiffs, were located and the tunnel below,” the lawsuit alleges.

The Commanders declined to comment. The security company, Contemporary Services Corporation, did not immediately reply to messages seeking comment. 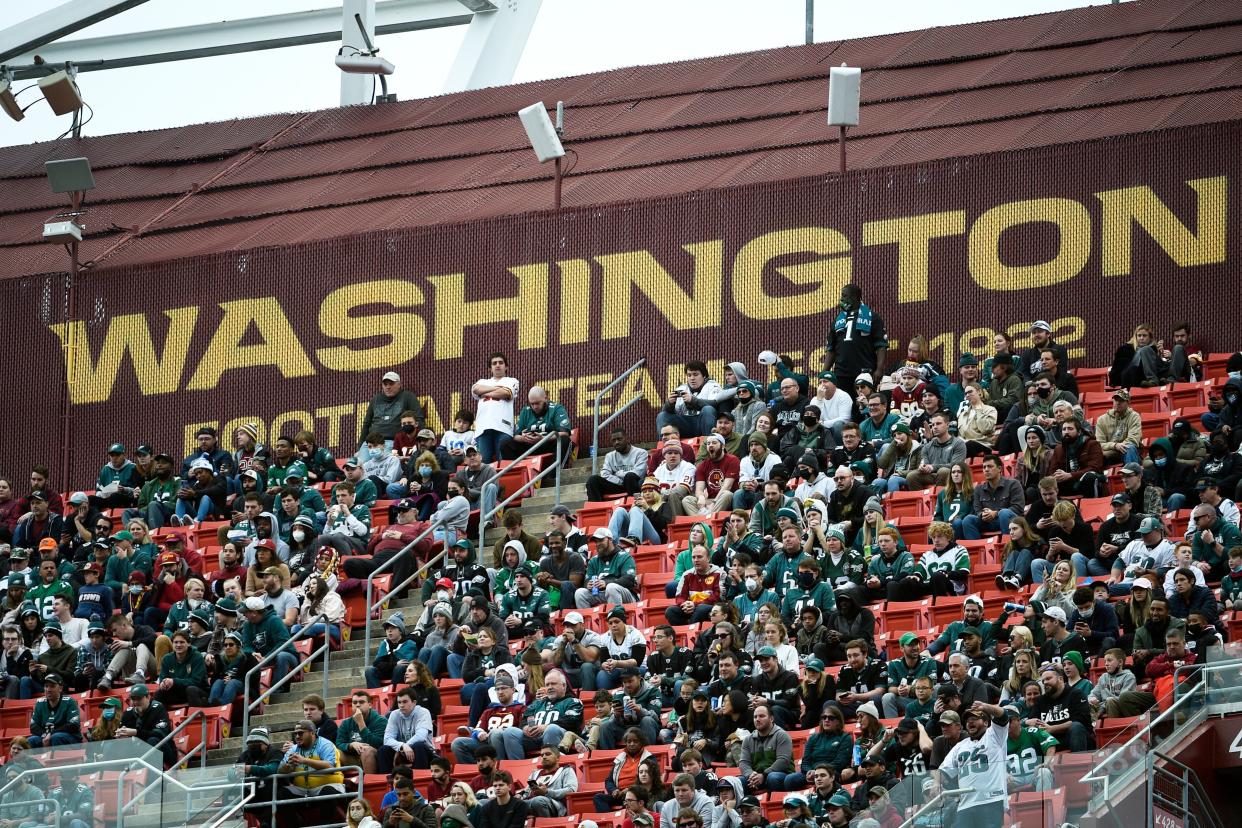 The railing collapse came after the Eagles’ 20-16 win over Washington on Jan. 2, as fans gathered near the tunnel to greet Eagles players. Video of the incident shows several fans clad in green spilling onto the ground as the railing gives out, just as quarterback Jalen Hurts is heading toward the tunnel.

Hurts later wrote a letter to the team and the NFL, inquiring about steps that would be taken to prevent similar incidents.

A team spokesperson said at the time that “to our knowledge, everyone involved was offered onsite medical evaluation and left the stadium of their own accord.”

“We’re very glad no one appears to have been seriously injured,” the Commanders, then known as the Washington Football Team, said in the January statement. “The safety of our fans and guests is of the utmost importance and we are looking into what occurred.”

Some of the fallen fans, who are now plaintiffs in the lawsuit, disputed the team’s statement to ESPN the following week. In the lawsuit, the four fans allege they were not offered medical treatment by team or security staff but rather told to “get the (expletive) out of the stadium.”

The fans also allege in the lawsuit they were not warned or cautioned against leaning on the railing prior to its collapse, and that stadium authorities did not appropriately secure and/or maintain the railing.