From the Archives, 1972: Celsius brings a change in temperature

A change in temperature

COME SEPTEMBER 1 you will wake up at your normal time, turn on the radio and probably be informed that the temperature is somewhere around 17 degrees. 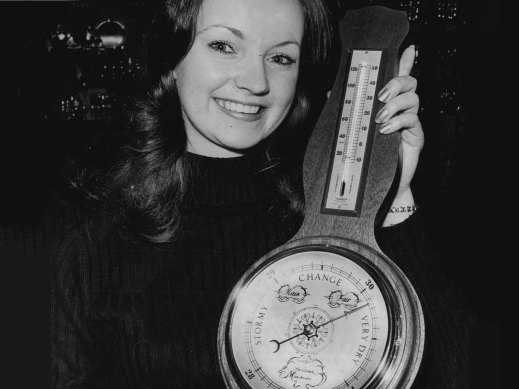 Frances Hewitt with a thermometer showing the Fahrenheit reading on the left side and Celsius on the right.Credit:Robert Pearce

Your most likely reaction would be to turn off the transistor, turn up the electric blanket and roll over to shut out a cold world.

But this is exactly what the people at the Weather Bureau DON’T want you to do. For it will not be freezing — it will be a change in terminology. Theirs is not an easy task.

As everybody knows, Australia is going metric. We already have had the decimalisation of the currency, and the change proved smooth.

But the change to metric measures is likely to turn out far more complicated and a much larger task for both the average person and the authorities.

The first step is already under way as radio announcers are now giving temperatures in both degrees Celsius and degrees Fahrenheit.

But from September 1 there will be no more (or at the best, very little) dualism in temperature readings.

Pressure readings on weather maps will also change to metric from September 1.

This will not affect the general public to any great extent because the new measure millibars — has been used for some time with the inch measurement.

But the change in temperature is something which will concern every person in the country.

That 17 degrees Celsius you may wake up to is actually the average temperature for September — a temperate 63 degrees Fahrenheit.

The Bureau of Meteorology has some advantages in engineering the change, however, as they can learn from the experiences in England several years ago.

This is why Australia will not have any extended period of dualism — as in England where this period lasted several years and only succeeded in confusing people.

Another problem which arose during the English conversion was the difficulty in changing the ideas of the people.

If, for the past 80 years Mrs X had been told her degrees in Fahrenheit, she was going to think things were very cold if somebody suddenly told her the summer temperature was 22 degrees (Celsius). And some people even complained to the authorities that the weather was colder since the introduction of Celsius.

This is a problem it is hoped to overcome.

THE MAIN problem expected with the change to Celsius as a measurement of temperature is you, the average person.

Suddenly, you are expected to think in degrees Celsius — not Fahrenheit or anything else.

The same thing happened with the change to decimal currency. You were then expected to think in terms of something costing 25 cents rather than 2/6.

Now, you think it has been a nice warm day at 75 degrees. Next month it will be rather a pleasant day at 24 degrees.

And this in fact is the whole basis of the change to Celsius. The aim is to have people think in degrees Celsius rather than degrees Fahrenheit, which most have been brought up to understand as temperature.

It is hoped that people will associate 30 degrees Celsius with a rather hot day that they would spend on the beach, rather than converting the figure to 86 degrees Fahrenheit and making a generalisation on weather from this.

Consequently the Bureau of Meteorology have built their literature around a cartoon strip character and the type of thing he would do on the particular day of X temperatures.

The character goes through the whole scale: 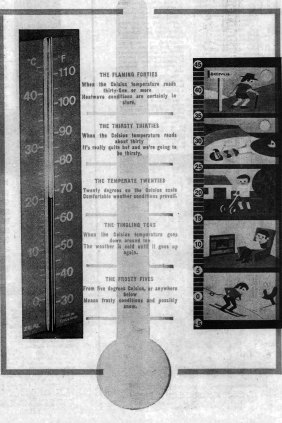 THE FLAMING FORTIES — the extremes in heat which would most likely be experienced in the Australian Outback (35 deg. C to 45 deg. C equals 95 deg. F to 113 deg. F).

THE THIRSTY THIRTIES —the type of weather experienced during a Melbourne summer. The day when you go to the beach for an afternoon in the sun. (25 deg. C to 35 deg. C equals 77 deg. F to 95 deg. F).

THE TEMPERATE TWENTIES — most people decide this is cool to warm weather. Ideal for mowing the lawn or driving with the roof down on your convertible. (15 deg. C to 25 deg. C equals 59 deg. F to 77 deg. F).