IT engineer claimed colleague's use of the word 'blacklist' was racist

A software engineer has lost a discrimination case against IBM after claiming his colleague’s use of the word ‘blacklist’ was racist.

Taiyyib Azam, 38, accused his co-worker at the computer giant of bigotry by using the word during a team call in the aftermath of the George Floyd murder in the USA.

The cybersecurity expert – part of a team codenamed X Force Red – also made a series of other ‘puzzling’ accusations, including that his managers were performing ‘black magic’ and ‘voodoo’ on him.

He made widespread and unsubstantiated allegations of racism against his colleagues in a bid to ‘support his views that every individual he interacted with was racist’.

Mr Azam was based at IBM’s UK office in Warwick, Warwickshire. He tried suing the US firm at an employment tribunal for race, disability and religious discrimination and victimisation.

The software engineer, who represented himself over the 16-day tribunal, claimed he was the victim of more than 30 acts of discrimination but the tribunal dismissed them all.

The tribunal ruled all of Mr Azam’s allegations were unfounded and his blacklist accusation ‘contrived as a way to bolster his own case’.

In her ruling, employment judge Geraldine Flood stated: ‘We find that although this grievance was confused and adopted a scattergun approach, that the claimant did have a genuine belief that the reason he was being treated differently in his perception, was because he was Asian.’ 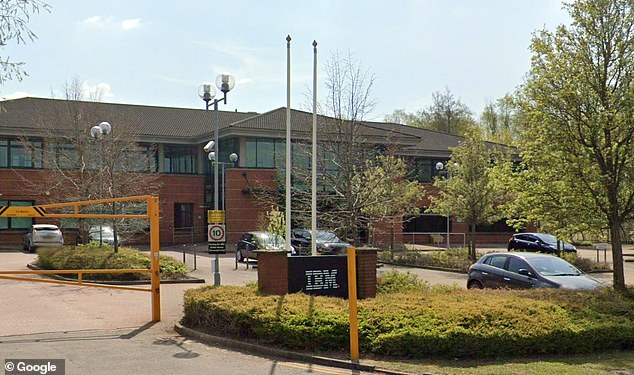 Taiyyib Azam was based at IBM’s UK office (pictured) in Warwick, Warwickshire. He tried suing the US firm at an employment tribunal for race, disability and religious discrimination

The tribunal in Birmingham heard Mr Azam – who was born and grew up in the city – began working for IBM in October 2015 as a cyber consultant in one of its cybersecurity departments, earning £55,000.

The hearing was told difficulties began just a year after he started working at IBM when he started claiming he deserved a promotion.

Over the following years, Mr Azam persistently claimed he was being denied promotions and opportunities to further his career due to his race.

He said: ‘I genuinely believe is to do with the colour of my skin I am being held back and discriminated against.

‘I am the only Asian person in the group I have seen other talented individuals of Indian heritage leave or be forced out for similar reasons.’

However, the tribunal heard there were Asian employees who advanced to the ‘highest’ positions at IBM and that Mr Azam simply had ‘unrealistic expectations of his own progression’.

He complained of ‘psychological bullying’ and in February 2019 he claimed ‘IBM was carrying out a sort of voodoo on him’ which damaged his mental health.

The same month he alleged his manager was ‘performing some black magic on him’ to deliberately target him.

Mr Azam, who is Muslim, argued unsuccessfully that one colleague called him a ‘f****** Indian’ twice and also inaccurately stated he had to work on Eid when he was in fact off. The tribunal dismissed another claim that a co-worker ‘humiliated’ him.

Mr Azam complained a colleague ‘ghosted’ him and alleged he was being ‘blasted’ by one manager when he wasn’t.

In May 2020, around the time of the murder of George Floyd in Minneapolis, Mr Azam said he was racially attacked.

Employment Judge Flood said the use of the word was ‘entirely innocuous’.

Judge Flood said: ‘Mr Azam complained about [a colleague] making a comment about blacklisting on a team call which he took as a reference to the George Floyd murder.

‘We heard evidence from a number of IBM’s witnesses about what those terms mean, namely that blacklisting is where a specific list of IP addresses that are not allowed to connect to a system is in place and thus any address not on that list will be rejected.

‘Mr Azam himself also used such terms in communications.

‘We found this a puzzling allegation as the only reference to blacklisting at this time we saw in messages was made by Mr Azam and there is no evidence that [the colleague] was involved in any of these.

‘Nonetheless we find that [the colleague] is also likely to have used the term blacklisting around this time as he acknowledged its use more generally.

‘We do not find that there was anything sinister in the way he or anyone used the word ‘blacklisting’ or ‘black’ as suggested by Mr Azam.

‘We were not satisfied that there was any link at all to the George Floyd murder on any mention of this phrase on this day and it was used by all, including Mr Azam, in a purely business context.

‘Our view is that this allegation has been constructed after the event by him as a way to bolster his claim and to support his views that every individual he interacted with was racist.’

Throwing out his claim, the judge added: ‘We had difficulties in accepting the credibility of the evidence that Mr Azam gave on many issues.

‘He had a tendency to focus on certain incidents and at times was exaggerating and embellishing the significance of these incidents in the overall narrative.

‘We struggled with the plausibility and reliability of much of his evidence.’

The judge added there was no evidence that ‘race played any part in promotion decisions’.