This is the shocking moment a man has his watch snatched from his wrist in broad daylight while waiting outside a luxury Mayfair eaterie.

The customer, who has not been identified, was walking into Sexy Fish in Berkeley Square, London on Tuesday evening when his timepiece was ripped away by the thief in full view of people standing outside.

In the video footage, a person wearing a fedora and dark jacket stalks the man and approaches just as he is about to walk into the venue.

After a brief struggle, he sprints away from the scene with the watch now in his possession while the shocked restaurant-goer pursues him down the street. MailOnline has contacted the Metropolitan Police for comment.

The incident comes after a spate of brazen thefts in the ‘Wild West’ capital that has seen luxury timepieces targeted by criminals openly operating in broad daylight.

Last week a thief dressed as a Deliveroo rider was caught on video smashing a £3million Bugatti Chiron with a hammer in a bid to steal a Kuwaiti playboy’s £110,000 Rolex.

And on the same day in Chelsea, west London, a brave elderly woman armed with a stick was seen confronting masked knifemen who had stolen a £60,000 Rolex from a woman in the street.

The recent crimewave has prompted police chiefs to admit there was an increase in examples of on-street robberies. 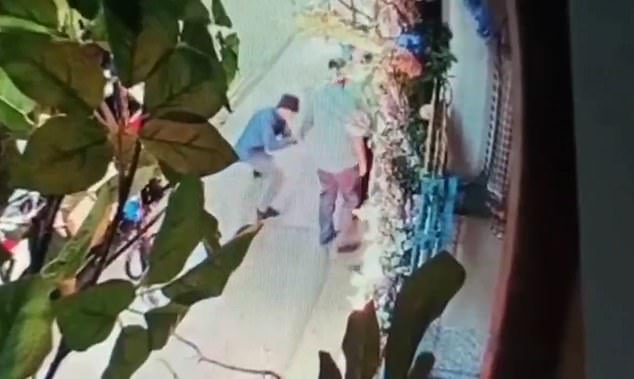 The customer, who has not been identified, was walking into Sexy Fish in Berkeley Square, London on Tuesday evening when his timepiece was ripped away by the thief in full view of those standing outside 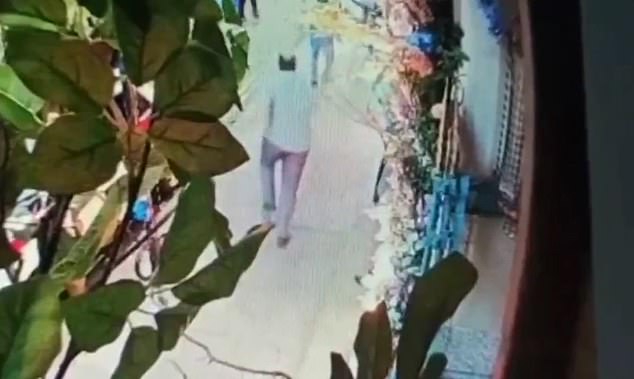 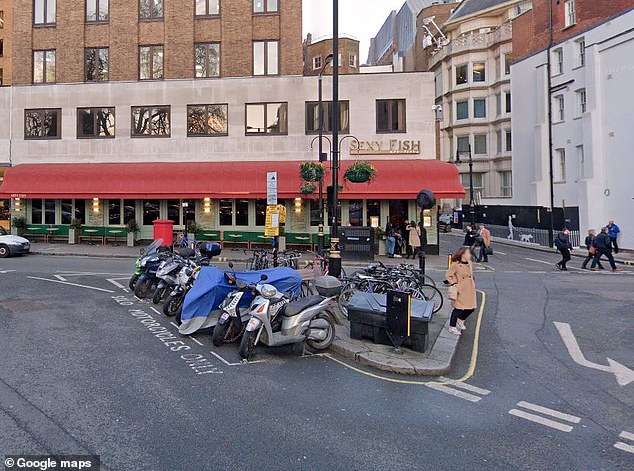 In the video footage, a person wearing a fedora and dark jacket stalks the man and approaches just as he is about to walk into luxury Asian restaurant Sexy Fish (pictured above)

In another harrowing video released on August 22, a rider wearing a Deliveroo uniform was caught stopping in traffic and smashing a Bugatti Chiron’s window with a hammer on Park Lane near Hyde Park Corner, Mayfair.

They then appear to hit the car several times before the supercar drives off quickly and the thief fails to make off with any valuables.

Another rider – also in a Deliveroo outfit – drives alongside the thief as they flee the scene.

After the attempted theft, Mr Al Basman can be seen being helped out of his smashed up sports car.

It is believed that the Kuwait playboy, who was staying at the Berkeley Hotel, was targeted after posting pictures of his supercars and expensive watches on social media.

A witness said: ‘The moped thieves were at the hotel this morning and staff told them to get off the pavement.

‘When Abdullah left in the Bugatti they started following him all the way to Hyde Park Corner. One beeped their horn which I assume was the signal to start attacking.

‘I assume they were waiting for a junction they knew would have a long red light so they had time to attack them.’

Two hooded thieves wearing balaclavas and black clothes were pictured that same day leaping out and ambushing two victims, a woman in her 30s and a man in his 40s as they walked through a quiet street in Chelsea, west London.

In new video footage obtained by MailOnline, one of the criminals can be seen tussling with the female victim as she lay in a doorway in Pond Place.

In the clip, the victim’s male companion can be seen attempting to fight off the muggers as the elderly woman approaches the fracas armed with a broom and waves it at the car before it drives off.

Responding to footage shared on Instagram, TV star Shabs Ahmad warned Sadiq Khan that he will have ‘blood on’ his ‘hands’ if he does not step in to address the wave of violent crime continuing to hit London.

He said: ‘Sadiq Khan are you seeing this s*** mate? And you’re too busy expanding the ULEZ?

‘Sort it out. Like I said before, you will have blood on your hands.

‘This guy could have very easily been stabbed.’

He went on to add: ‘All I’m saying is I think we all need to be ready for them cos ain’t nobody taking my s***.’

‘After recently getting jumped in Mayfair, I’ll never wear a watch out again and suggest you do same.’

Detective Chief Superintendent Owain Richards, in charge of policing for Westminster, Hammersmith and Fulham and Kensington and Chelsea, said: ‘In Central West BCU we have seen a rise in these types of robberies over recent weeks as criminals take advantage of the longer days and the busier streets. We know similar increases have occurred in other areas of the city.

‘We want people living in and visiting London to enjoy our city safely – no-one should have to go about their day in fear of thieves.

‘We know the impact these crimes have on each and every victim and that is why we have extra officers in place in locations where these crimes are most common. This includes those from specialist units, like our Op Venice teams.

‘We are also reminding people to remain aware of their surroundings and where possible, keep valuables out of sight.’