Lionesses turning to beans to power them through Sunday's final

The Lionesses really are full of beans! England Women’s team are turning to Heinz favourite to power them through Sunday’s final

The England Lionesses have their own dedicated team of chefs preparing meals – with beans on toast a big winner among the team.

Three chefs at the Lensbury Resort have been assigned to prepare meals for the squad, making sure they are not only nutritious but providing energy for the twice daily training sessions.

Favourite food options chosen by the team include grilled chicken and pasta dishes with the menu carefully prepared by a nutritionist assigned to the squad by the FA.

But striker Bethany England has revealed hers – and many of the team’s favourite pre-match meal – is beans on toast.

‘It is not on the usual menu at the Lensbury and we don’t even serve baked beans with any of our meals, but this was a particular request,’ said a source at the resort.

The team also have the choice of choosing from the regular menu served at the Lensbury with meals such as fish and chips and steamed pollock.

There is also a choice of five salads with numerous vegetarian options, including a falafel burger.

Those players looking for a sweet fix could chose from Banana split or sticky toffee pudding among the deserts.

The Lensbury – which boasts former Arsenal striker Paul Merson as a member – will have hosted the England team for almost a month by Sunday evening.

Win or lose, the team plan to return to Teddington, south west London, on Sunday night where they will be given a heroes welcome whatever the score. 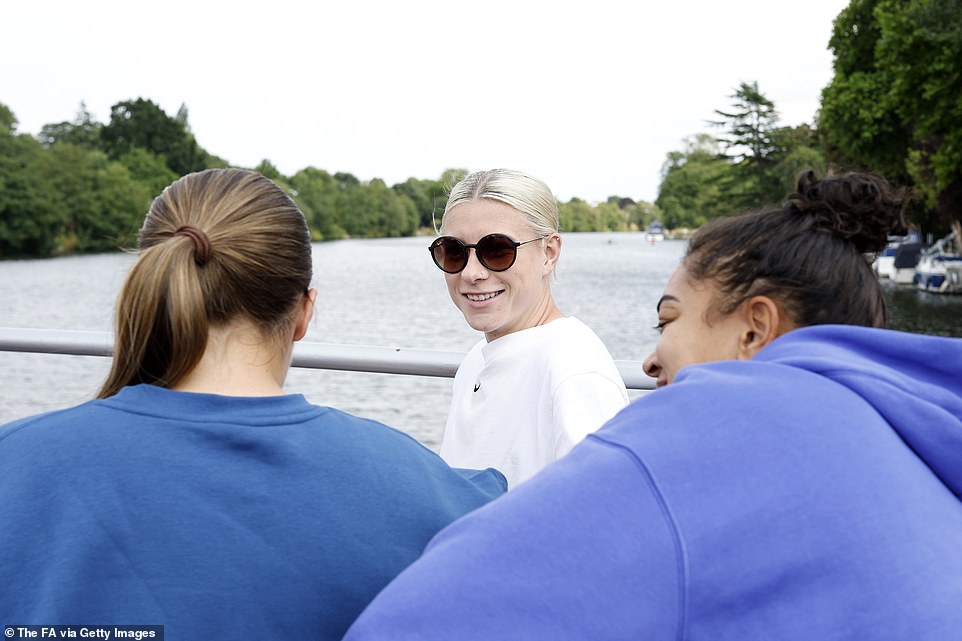 Three chefs are assigned to prepare meals for the squad, but Lionesses striker Bethany England (pictured) has revealed hers – and many of the team’s favourite pre-match meal – is beans on toast 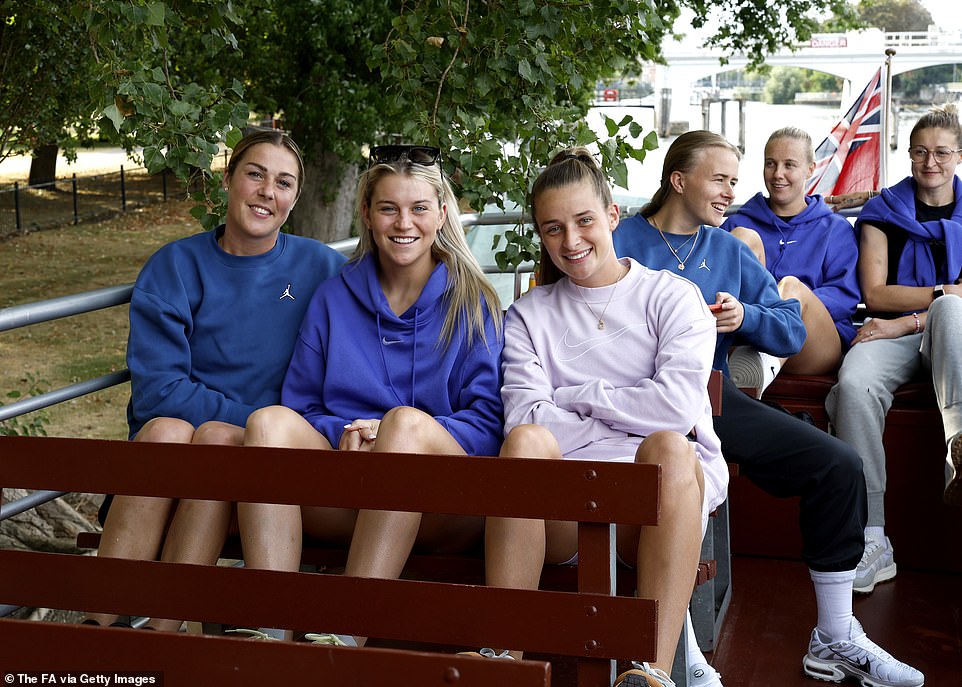 England’s Lionesses have been relaxing on a boat trip ahead of the grand finale of the women’s Euros against eight-time winners Germany at Wembley Stadium on Sunday. Pictured from left, Mary Earps, Alessia Russo and Ella Toone 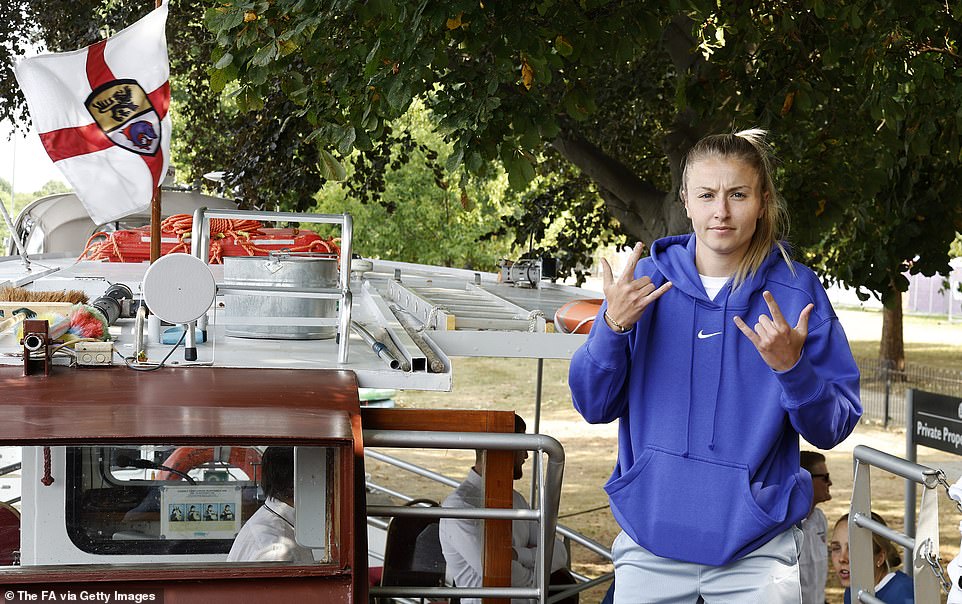 Staying close to their 25-acre grounds of their Teddington hotel base, the footballers enjoyed a boat ride on the Thames in their sports gear just three days before the European showdown (pictured, defender Leah Williamson) 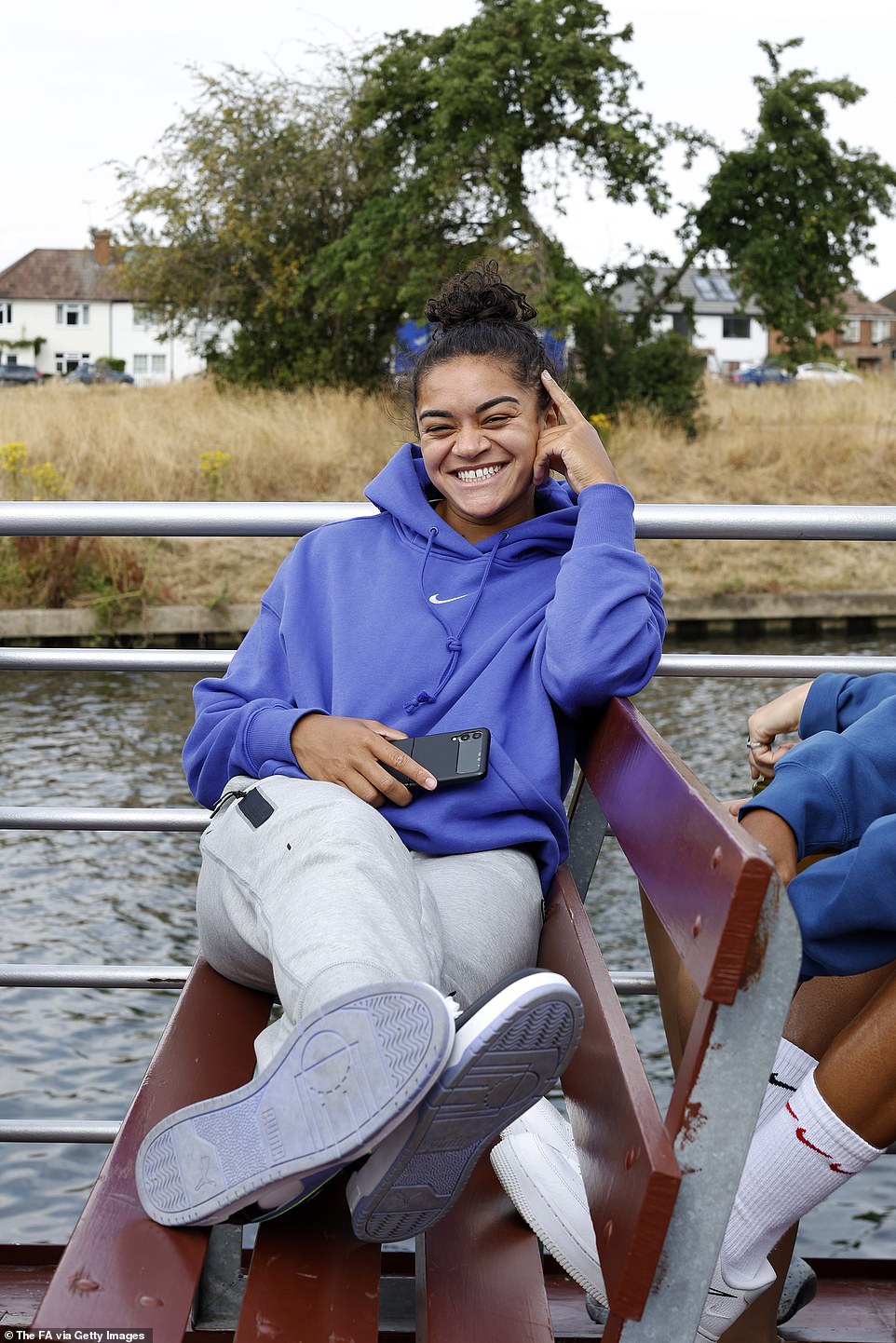 Hosts England waltzed past Sweden in Tuesday’s semi-final, the second-ranked team in the world, with a 4-0 win on Tuesday and will face the eight-times European champions at Wembley in the highest attended edition of the tournament (pictured, Chelsea defender Jess Carter)

‘We’ve really loved having them here and everyone is behind them,’ said a member of the staff.

‘They have been brilliant and so friendly. They were always signing autographs. I saw one of the women recording a message on a phone for a fans that was ill and unable to attend any of the matches.

The squad have been able to wind down in between training and matches in a relaxation room fitted out with giant bean bags and a Big Brother style Diary room with players encouraged to talk with a psychologist to offload any problems.

To avoid the players getting bored darts, table tennis, basketball and cards have been laid on by the resort.

There have also been karaoke singalongs and a less traditional games associated with football stars –hide and seek.

Staff members were asked to dress up as a fox with the players seeking them out.

And Lauren Hemp added: “They looked like clowns. We walked around in pairs and you had to find a fox. They would give you a fact and you had to say whether it was true or false.

“If you got it wrong you would do a challenge – like a TikTok video.”

It comes after the Lionesses spent their Saturday relaxing on a boat trip ahead of the grand finale of the women’s Euros against eight-time winners Germany at Wembley Stadium on Sunday.

Staying close to their 25-acre grounds of their Teddington hotel base, the footballers enjoyed a boat ride on the Thames in their sports gear just three days before the European showdown.

The footballers were in good spirits as they enjoyed the scenic views under overcast weather, having a moment to recuperate in-between training for the big day on Sunday.

Hosts England waltzed past Sweden in Tuesday’s semi-final, the second-ranked team in the world, with a 4-0 win on Tuesday and will face the eight-times European champions at Wembley in the highest attended edition of the tournament, with the 87,200 tickets having sold out.

Record TV audiences for the final are expected, with the highest UK peak for women’s football at 11.7million for the England World Cup semi-final against the US in 2019, where the Lionesses lost 2-1.

Bramall Lane reached a record attendance for a European Women’s Championship semi-final with 28,624 fans in the stands.

There was a peak TV audience of 9.3 million watching the England v Sweden semi-final on Tuesday, as well as two million streams for the game across BBC iPlayer and BBC Sport website and app.

Tickets for Sunday’s showpiece at Wembley – which has a 87,200 capacity – have sold out.

Millions are also watching in Germany, Their quarter final against Austria was watched by 9.5m, 38 per cent of TV viewers, a German record for a women’s Euros match.

Sarina Wiegman’s side, who have won 11 consecutive matches, have now become the first England women’s team to reach a major final since 2009. 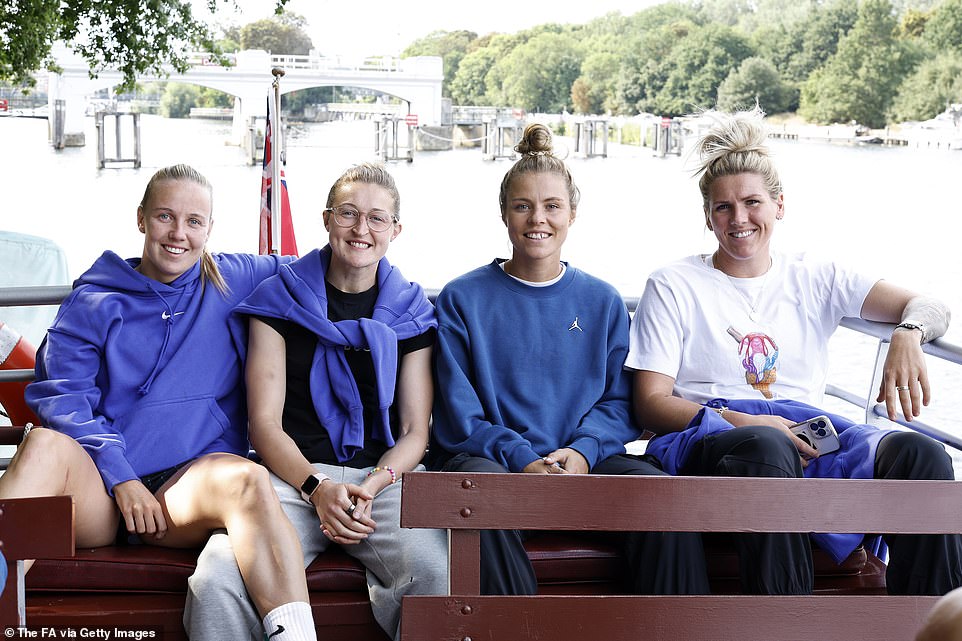 The footballers were in good spirits as they enjoyed the scenic views under overcast weather, having a moment to recuperate in-between training for the big day on Sunday. From left, Beth Mead, Ellen White, Rachel Daly and Millie Bright

Chelsea defender Jess Carter put her feet up on the boat’s wooden bench to put herself in good stead for Sunday’s big match – where she will face split loyalties as she goes head-to-head against her German goalkeeper partner Ann-Katrin Berger, 31.

The team are just 90 minutes from clinching the European trophy against Germany, who has already amassed eight European titles, and only twice since 1987 have they not reached the final.

English Beth Mead has scored six times so far in the tournament, and Germany’s Alexandra Popp has found the back of the net six times too – meaning they are neck and neck in the race for the Golden Boot prize.

They were pictured in a training session on Wednesday at The Lensbury Resort hotel base, as well as enjoying a sunny stroll with their manager yesterday, defusing the growing tension of the upcoming final with their round of takeaway coffees.

Head coach Sarina Wiegman, 52, joined the Lionesses as they drank down their refreshments, with only three days to go until they walk out of the tunnel before a sold-out crowd at Wembley Stadium on Sunday before the 5pm kick off.

Millie Bright was pictured deep in conversation with someone on the phone, as she and her fellow Lionesses approach the end of a month-long tournament that has kept them living out of hotels and in a state of intensive training.

Former England women’s coach Phil Neville said he was proud of the Lionesses and hailed the team that will contest Sunday’s Euro 2022 final against Germany as ‘very special’. 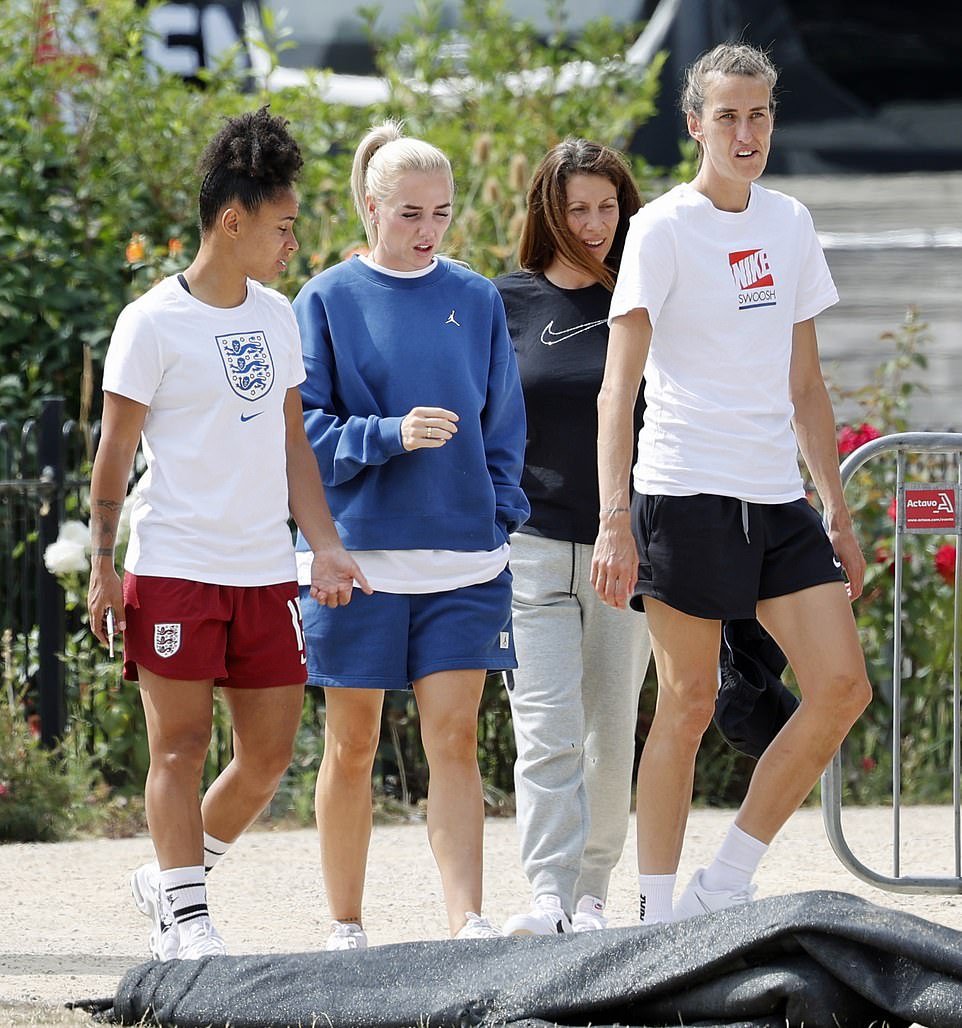 The Lionesses are in their Teddington hotel ‘lair’, plotting a winning strategy for Sunday’s final against Germany. Pictured, left to right: Demi Stokes, Alex Greenwood and Jill Scott 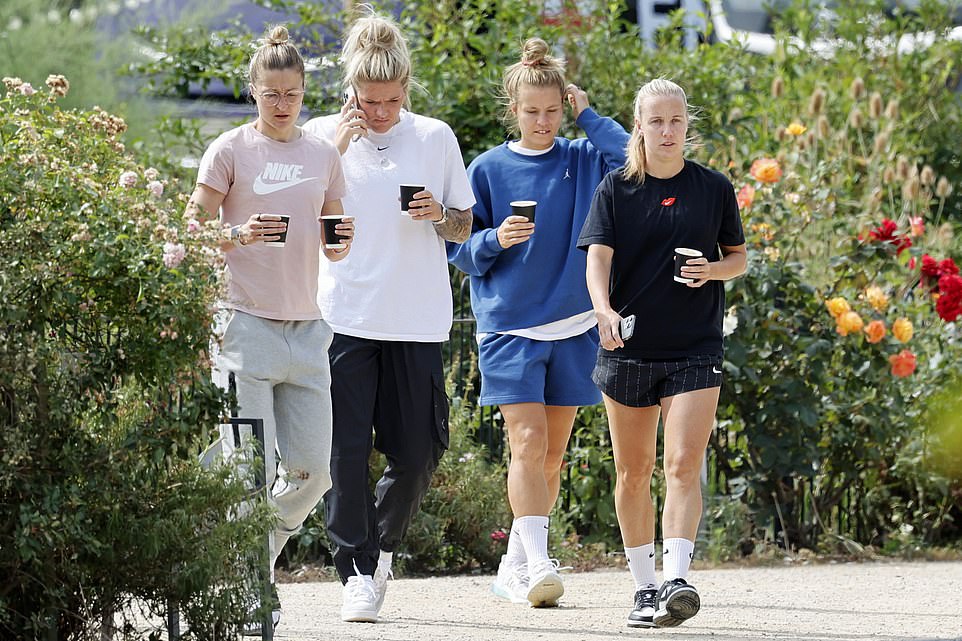 While sipping on coffees on a sunny stroll through the 25-acre grounds of The Lensbury Resort, the Lionesses took a brief break from brewing up tactics for the sold-out showdown at Wembley Stadium. Pictured, left to right: Ellen White, Millie Bright, Rachel Daly and Beth Mead 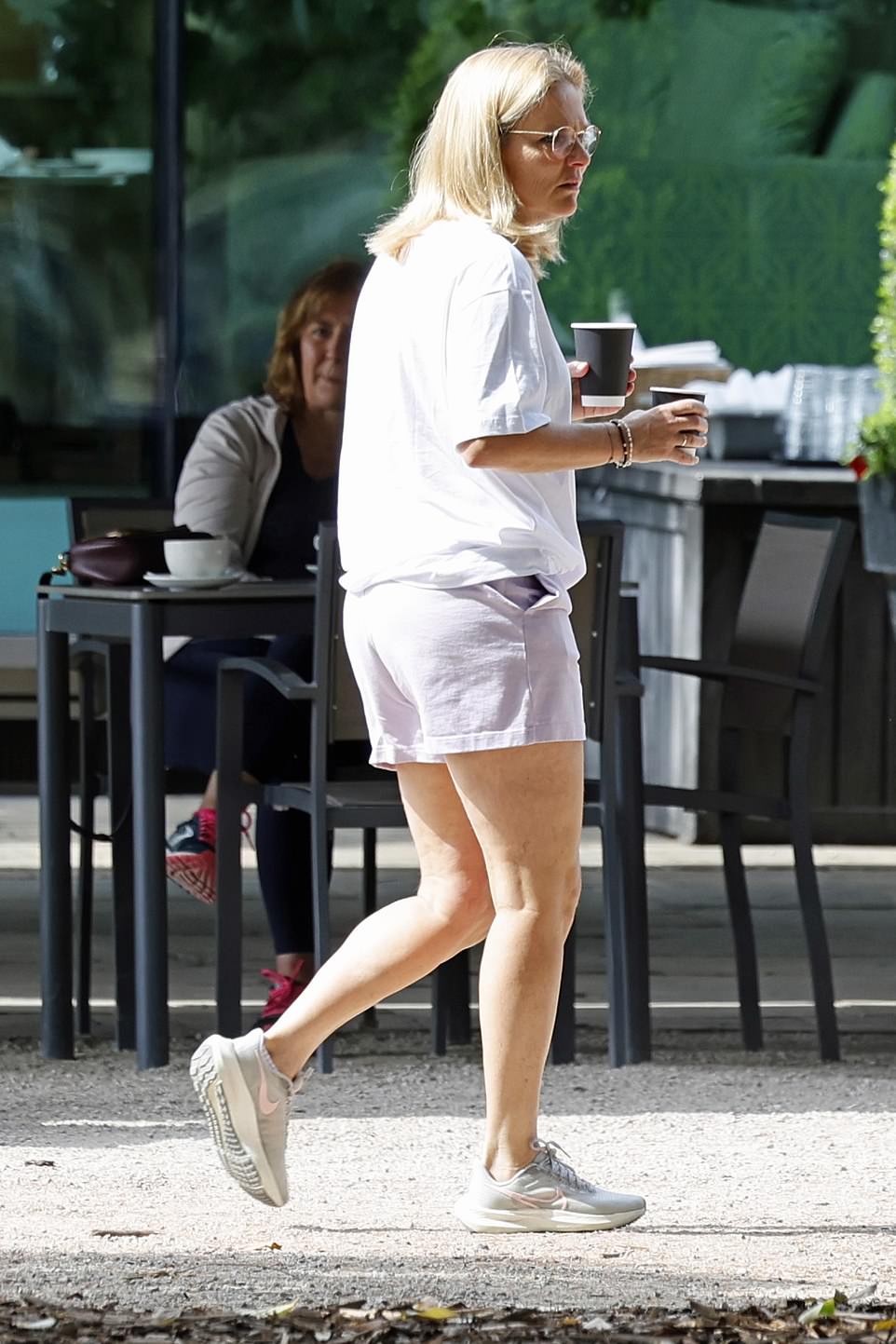 Head coach Sarina Wiegman, 52, who has led the Lionesses to the final of the tournament, was carrying two coffees and wearing all white, along with a pair of Nike trainers

‘I don’t think I have ever seen a team approach a major tournament and basically destroy every team that comes in their path,’ Mr Neville said.

‘Seeing them with a smile on their faces, seeing them play with freedom, seeing those players play to their absolute maximum of their ability, I think it’s a brilliant thing’The English FA must take a lot of credit for the investment that they put into the women’s game but those players and that manager are very special.’