Matt Hancock has revealed how one billion items of PPE were trapped in a warehouse at the start of the pandemic because it only had one door – meaning lorries delivering to hospitals and care homes had to queue up and be loaded one at a time.

In his new pandemic diaries, the former health secretary says he was ‘absolutely furious’ at the blunder, which led to delays sending millions of gowns, masks and gloves to NHS staff from a ‘huge storage unit’ in the North West of England in March 2020.

Exclusive extracts from Mr Hancock’s book, being serialised in the Daily Mail and the Mail on Sunday, reveal that PPE provision to hospitals was already a ‘total disaster’ by the start of the first lockdown and that the NHS’s supply chain had ‘effectively collapsed’.

Mr Hancock also writes that, when Covid arrived in the UK, ministers had ‘no clear record’ of what PPE was in storage and soon learned that some was useless and already ‘past its ‘best before’ date’. 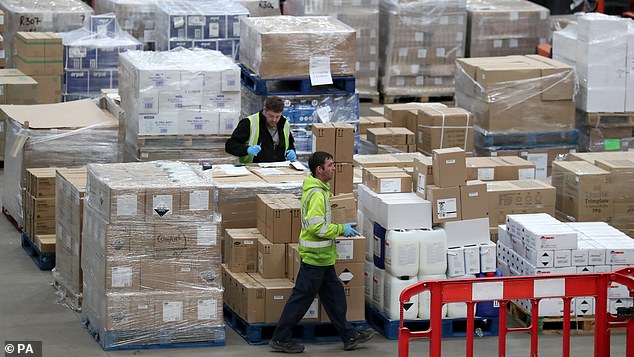 A worker gathering supplies at the NHS’ National Procurement Warehouse at Canderside, Larkhall 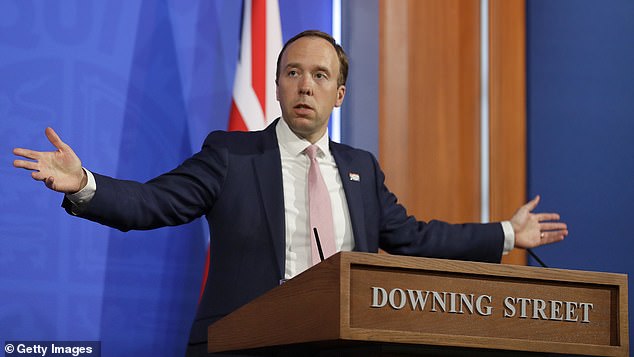 On March 17, 2020, just six days before Boris Johnson announced the first national lockdown, Mr Hancock wrote: ‘I’ve been told we have a billion items of PPE in a warehouse in the North West. ‘Hooray!’ I thought. Just one problem – we can’t get it out. It turns out that it’s in a huge storage unit with only one door. Ergo, only one lorry can pull up at a time. What a classic government fail.’ 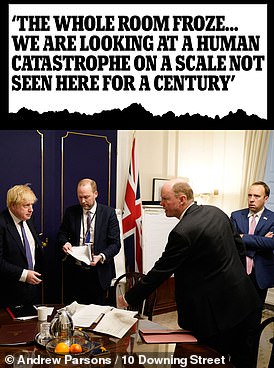 Within a fortnight, PPE deliveries to hospitals dried up, he said. At the time, some doctors and nurses were pictured wearing bin liners as aprons and ski goggles instead of protective glasses.

He said: ‘My heart sank. It’s completely unacceptable. Naturally we’re being accused of sending these brave NHS staff to their potential doom by not giving them the protection they need.

‘The absurdity of the situation is that we actually have enough – we just can’t get it out of the damn warehouse.’

The following day the Army were brought in, he wrote.

‘The Army is doing a great job on PPE delivery. Now I’ve seen what they can do, I want to get them involved in the proposed ExCel Centre temporary hospital. The PM is keen,’ he said.

Then, on March 30, the former health secretary said deliveries had ‘collapsed’. He explained that before the pandemic the Government was supplying ‘small amounts’ of PPE to 250 hospitals; now it had to send it to those trusts as well as 56,000 GPs and dentists and all care homes.

He wrote: ‘Hats off to those who bought a billion items of PPE all those years ago – I just wish they’d put more thought into getting it out. 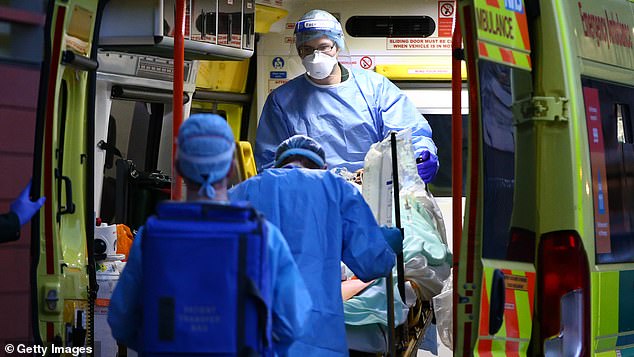 A patient is transported out of an ambulance by medics wearing PPE at the Royal London Hospital on January 2, 2021

Matt Hancock today mounts a robust defence of his handling of care homes during the Covid pandemic, insisting the virus was primarily brought into facilities by infected staff members.

The former health secretary has faced fierce criticism over the Government’s decision in the early stages of the outbreak to discharge potentially infectious Covid patients from hospitals into care homes without prior testing.

The policy has been blamed by many for the huge numbers of Covid deaths in care facilities during the first wave of the pandemic, when an estimated 20,000 elderly residents died.

But in his bombshell pandemic diaries, Mr Hancock insists that only a fraction of the Covid cases in care homes – as few as 1.2 per cent – were actually caused by hospital discharges.

He says he was shown evidence suggesting that the virus was ‘primarily’ brought into homes by infected staff.

And he attacks the ‘scandalous’ behaviour of some care home bosses who he accuses of ‘unscrupulously’ using workers infected with the virus.

Mr Hancock also claims that it was the then-NHS boss Sir Simon Stevens who pushed to discharge hospital patients into care homes, saying he was ‘determined to make it happen’.

He admits that transferring them without testing first was an ‘utter nightmare’, but says that at the time officials did not have enough testing capacity to do so anyway.

The claims are likely to prove controversial with families who lost loved ones.

‘Worse, it turns out a load of it is now out of date, and some kit bought over a decade ago doesn’t conform to the latest standards. Then there’s a batch which is actually still usable but has the wrong ‘best before’ date on it. How we will persuade people to use that is anyone’s guess.’

On the same day, he writes: ‘The government-owned company that gets PPE supplies to hospitals across the NHS has effectively collapsed. Total disaster. I’m absolutely furious that the people who are meant to be experts in logistics have been unable to cope because there are too many actual logistics. WTF?’

He added: ‘We’ve been buying more from China, but the immediate problem is still lorry access to our storage facility in the North West, where there’s only one door. Funnily enough, nobody has been able to magic up any extra entrances, so we’re still stuck with single lorryloads at a time.’

The scramble for PPE began in January 2020 when Mr Hancock said Public Health England [PHE] told him there was a shortage of lifesaving kit and some of it needed to be binned because it was out of date.

On January 30, 2020, he wrote: ‘PHE’s audit of PPE came back and did not lighten my mood. There’s no clear record of what’s in the stockpile, and some kit is past its ‘best before’ date. I’ve instructed officials to work out what we need fast, and buy in huge quantities.’

In the same entry Mr Hancock admits he wanted to force all Britons airlifted from Wuhan – where the first Covid outbreak was detected – into quarantine, but was told by officials it would breach their human rights.

He said: ‘The Wuhan Brits are on their way back. I’ve had a showdown with officials and lawyers over what to do with the evacuees when they land at RAF Brize Norton.

‘PHE thinks they should be greeted with a smile and a leaflet and asked nicely to go home and stay there for a couple of weeks. I said they should go straight into quarantine. PHE started hand-wringing about human rights.

‘OK,’ I said, ‘let’s get them to sign a contract before they board. In return for the flight, they agree to go into quarantine. No contract, no flight’. I was told the contract wouldn’t be legally enforceable and was too draconian. ‘Do it anyway,’ I instructed.’

They were put in quarantine for 14 days.

The Government’s failure to provide enough PPE for the NHS sparked an extraordinary ‘gold rush’ in the first lockdown, when highly lucrative contracts were handed out to questionable businesses and individuals as the Department of Health fought desperately to plug the shortages.

By July 2020, contracts worth £5.5billion were agreed at speed without a competitive tender process as the pandemic swept Britain.

The Daily Mail revealed at the time that many firms at the centre of the public cash bonanza enjoyed a huge payday because the NHS paid 50 per cent more for PPE than before the Covid crisis began.

Today there is a glut of PPE and the cost of storing unused pandemic protection in warehouses has soared to £770,000 per day.

Ministers have been accused of allowing a ‘never-ending tale of government waste’ over the splurge of taxpayers’ money on personal protective equipment, including gowns, masks and gloves.

There are 13.2billion items of PPE in storage – compared to the 17.3billion pieces delivered to frontline doctors and nurses during the pandemic. The cost of housing the items has risen from £700,000 a day in August to £770,000 in November.