Matt Hancock today mounts a robust defence of his handling of care homes during the Covid pandemic, insisting the virus was primarily brought into facilities by infected staff members.

The former health secretary has faced fierce criticism over the Government’s decision in the early stages of the outbreak to discharge potentially infectious Covid patients from hospitals into care homes without prior testing.

The policy has been blamed by many for the huge numbers of Covid deaths in care facilities during the first wave of the pandemic, when an estimated 20,000 elderly residents died.

But in his bombshell pandemic diaries, Mr Hancock insists that only a fraction of the Covid cases in care homes – as few as 1.2 per cent – were actually caused by hospital discharges. 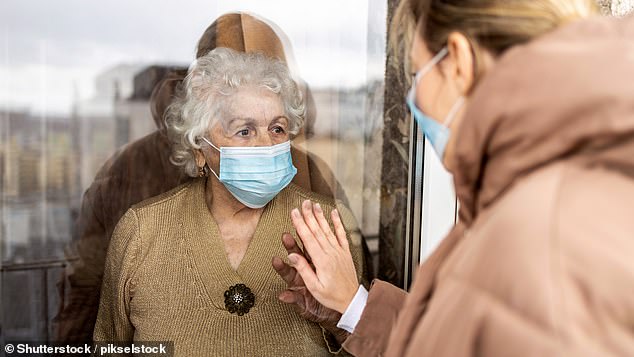 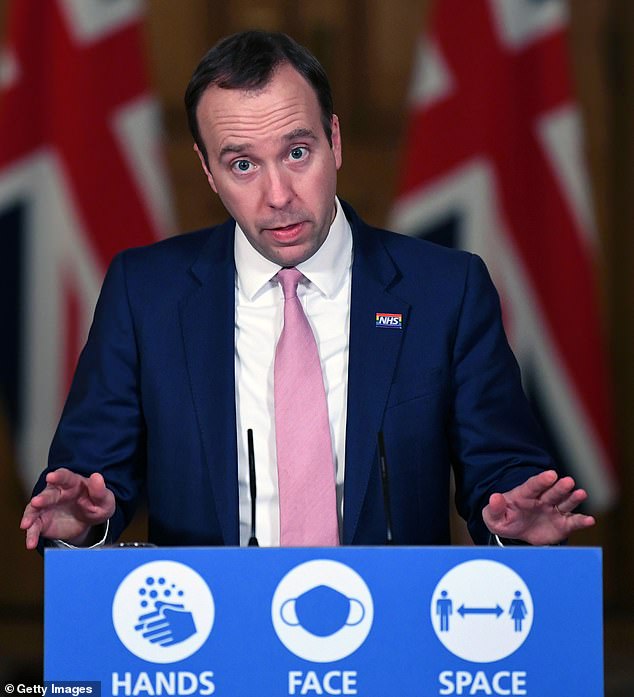 In his bombshell pandemic diaries, Mr Hancock insists that only a fraction of the Covid cases in care homes – as few as 1.2 per cent – were actually caused by hospital discharges

He says he was shown evidence suggesting that the virus was ‘primarily’ brought into homes by infected staff.

And he attacks the ‘scandalous’ behaviour of some care home bosses who he accuses of ‘unscrupulously’ using workers infected with the virus.

Mr Hancock also claims that it was the then-NHS boss Sir Simon Stevens who pushed to discharge hospital patients into care homes, saying he was ‘determined to make it happen’. 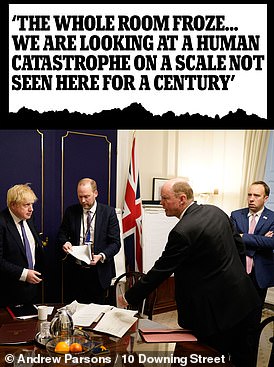 He admits that transferring them without testing first was an ‘utter nightmare’, but says that at the time officials did not have enough testing capacity to do so anyway.

The claims are likely to prove controversial with families who lost loved ones.

Mr Hancock says that during the first wave of the pandemic official data proves that just 1.2 per cent of care home cases were caused by patients leaving hospital. He insists: ‘The vast majority of infections were brought in from the wider community, mainly by staff.’

A crisis in testing and PPE turned care homes into ‘warzones’ in late March 2020, as the nation was plunged into lockdown.

Weeks later Mr Hancock was ridiculed for saying the Government had ‘tried to put a protective ring around our care homes’ from the start of the pandemic despite the policy of discharging hospital patients to them.

Deaths peaked in late April, but it was not until July that weekly deaths in care homes dropped below 200.

In his entry of April 2, 2020, Mr Hancock acknowledged that elderly patients leaving hospital would not be tested for Covid, but claims care homes were given clear guidance on isolation measures.

He said: ‘The tragic but honest truth is we don’t have enough testing capacity to check anyway. It’s an utter nightmare, but it’s the reality.

‘Under the circumstances, we must make sure that anyone going from a hospital into a care home is kept away from other residents. I hope this message filters through and is followed.’ 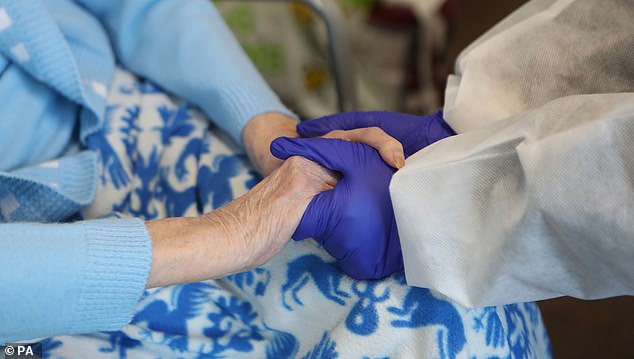 In his entry from April 18, four weeks after the national lockdown began, he said care homes ‘haven’t yet grasped the fact that we’re only going to get out of this if we test, test, test’.

1BILLION PPE items were trapped in a warehouse at start of pandemic because it only had ONE DOOR: Matt Hancock

Matt Hancock has revealed how one billion items of PPE were trapped in a warehouse at the start of the pandemic because it only had one door – meaning lorries delivering to hospitals and care homes had to queue up and be loaded one at a time.

In his new pandemic diaries, the former health secretary says he was ‘absolutely furious’ at the blunder, which led to delays sending millions of gowns, masks and gloves to NHS staff from a ‘huge storage unit’ in the North West of England in March 2020.

Exclusive extracts from Mr Hancock’s book, being serialised in the Daily Mail and the Mail on Sunday, reveal that PPE provision to hospitals was already a ‘total disaster’ by the start of the first lockdown and that the NHS’s supply chain had ‘effectively collapsed’.

Mr Hancock also writes that, when Covid arrived in the UK, ministers had ‘no clear record’ of what PPE was in storage and soon learned that some was useless and already ‘past its ‘best before’ date’.

On March 17, 2020, just six days before Boris Johnson announced the first national lockdown, Mr Hancock wrote: ‘I’ve been told we have a billion items of PPE in a warehouse in the North West. ‘Hooray!’ I thought. Just one problem – we can’t get it out. It turns out that it’s in a huge storage unit with only one door. Ergo, only one lorry can pull up at a time. What a classic government fail.’

Within a fortnight, PPE deliveries to hospitals dried up, he said. At the time, some doctors and nurses were pictured wearing bin liners as aprons and ski goggles instead of protective glasses.

He said: ‘My heart sank. It’s completely unacceptable. Naturally we’re being accused of sending these brave NHS staff to their potential doom by not giving them the protection they need.

‘The absurdity of the situation is that we actually have enough – we just can’t get it out of the damn warehouse.’

He said it was ‘exasperating’ that the average care home had carried out 0.5 tests, ‘given how hard we’re working to increase capacity’.

In that same week, ending April 24, the number of Covid deaths in care homes peaked with 3,768 deaths.

Care home bosses have repeatedly claimed that they could not get hold of tests because of failures at the top of Government.

But in January 2021, during the second wave of Covid, Mr Hancock writes of the ‘scandalous’ behaviour of 40 different operators which continued to use staff who were infected with the virus.

‘I am shocked,’ he writes. ‘How could management do this, knowing how vulnerable their residents are? It underlines why we need to make jabs mandatory for people working in social care… There will be howls of protest, but we need to make it happen.’

Mr Hancock is likely to face heavy criticism during the public inquiry into the pandemic over his handling of care home residents, with his diary entries hinting at his possible defence.

This year the High Court ruled the former health secretary and Public Health England’s policy not to order untested patients into isolation when they returned to care homes in March and April 2020 was ‘unlawful’ and ‘irrational’. It dismissed a claim against NHS England.

Mr Hancock also told MPs on the Commons Science and Technology committee in July 2020 that he was responsible for setting the strategy for testing.

Of the decision to order hospitals to urgently discharge fit patients, issued via a letter from NHS England boss Sir Simon Stevens, Mr Hancock told MPs on the committee: ‘Of course, that decision was discussed with me and the Prime Minister before it was executed… We protected the NHS.’

In a new extract, published in full in tomorrow’s Daily Mail, Mr Hancock quotes data from the UK Health Security Agency (UKHSA) from May 2021 which found that just 1.2 per cent of care home cases between January and October 2020 were associated with hospital discharges. Of these, 286 died within two months of testing positive.

In his entry from May 27, 2021, Mr Hancock concludes: ‘They analysed all the Covid cases in care homes from January to October last year and found that just 1.2 per cent could be traced back to hospitals. The vast majority of infections were brought in from the wider community, mainly by staff.

‘Overall, England did no worse at protecting care home residents than many countries, and better than some – including Scotland, where Sturgeon’s team has been responsible for decision-making.

‘Regardless, the awfulness of what the virus did to people in care homes around the world will stay with me for the rest of my life.’

In a separate entry from May 2020, Mr Hancock said: ‘People are starting to blame us for discharging elderly people from hospital into residential settings without testing them properly, before we introduced strict rules.

‘The evidence simply doesn’t bear that out: care home outbreaks rose sharply long after we had enough tests to put that right.’

Then, on July 16, he said his ministerial red box contained a ‘particularly startling note’.

‘The main takeaway is that the virus is primarily being brought in by staff, not by elderly people who’ve been discharged from hospital. This explains a lot,’ he said.

In his interview with the Mail, Mr Hancock claimed the Government was reluctant to blame staff during the pandemic for fear of damaging morale.

In his exclusive interview with the Mail, Mr Hancock claimed the Government was reluctant to blame staff during the pandemic for fear of damaging morale.

Mr Hancock said he had himself been wary of pointing the finger at carers who were working on the front line.

He said: ‘I didn’t want to say it, I didn’t want at the time to demoralise staff by talking about it in a way that would have been very difficult to do in a sensitive manner.

‘Workers worked in more than one care home, as a result Covid was transmitted from one to another.’

The former health secretary added: ‘This is very difficult for me as I have had some quite serious accusations thrown at me.

‘All I can say is I feel it is vital we learn the right lessons. The danger, if I don’t tell my perspective as I see it on this, is that we learn the wrong lessons.’

In an entry from March 3, 2020, Mr Hancock says social care minister Helen Whately had a ‘growing nervousness’ about the capacity of the system to cope.

She said only two council areas had plans in place, and that they only stated ‘directors of adult social services need to know the effectiveness of providers’ plans, emerging risks and their capacity to meet demand’.

Mrs Whately, who said it had taken her two weeks just to get a meeting with the chief social worker Lyn Romeo, added of the planning: ‘It needs a rocket under it.’

Two days later, PPE provision to care homes was ‘still all over the place’, she told Mr Hancock. ‘The supply chain company that delivers PPE has never seen so much demand and they’re really struggling,’ he writes.

Experts working for the Department of Health noted the results are ‘constrained by the available data, since most people discharged were not tested in March and April’, and that ‘all the analyses done are based on data that are less than ideal’.