Royal Mail is urging customers to post their mail earlier than usual for Christmas this year as a result of the ongoing strike action by its workers.

The company is bringing forward its latest recommended posting dates for domestic and international mail to help manage any impact from planned strike action by members of the Communication Workers Union on December 9, 11, 14, 15, 23 and 24.

The changes are designed to help the company keep mail moving in the run up to Christmas when mail volumes are higher.

With the threat of more planned CWU strike action across the UK, Royal Mail said it continues to deploy a range of contingency plans. 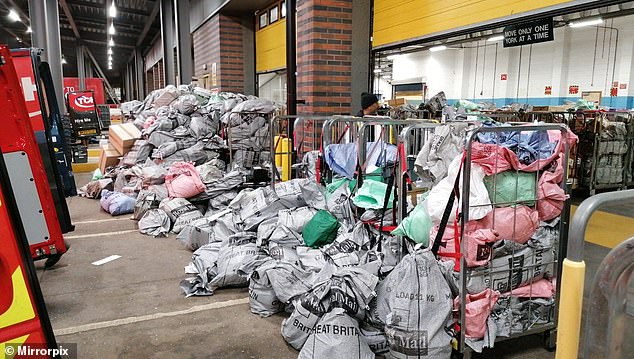 These recommendations follow reports of undelivered post which have been pictured stacking up at depots across the country.

Over 100,000 Royal Mail workers are expected to strike across December, one of the busiest periods for the postal service.

Postal workers recently rejected Royal Mail’s ‘best and final offer’ which consisted of enhanced pay deals of up to nine per cent over the next 18 months. 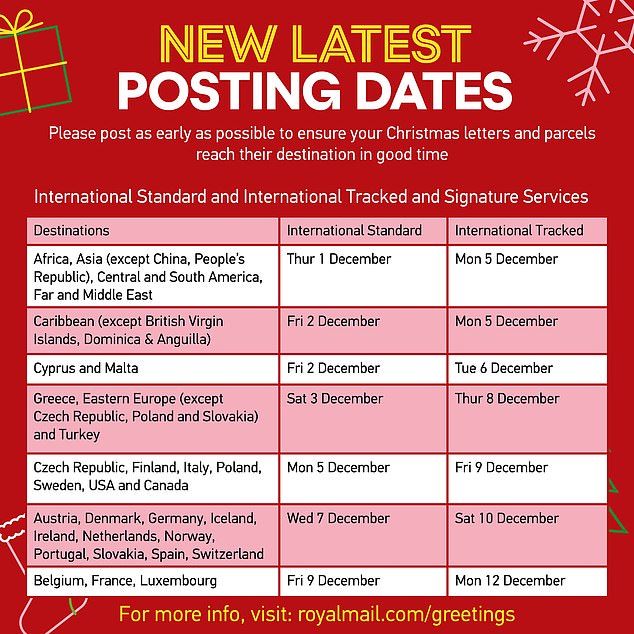 Nick Landon, chief commercial officer, Royal Mail, said: ‘The CWU is striking at our busiest time, holding Christmas to ransom for our customers, businesses and families across the country.

‘We apologise to our customers for any disruption and delay that the CWU strike action is causing. We ask our customers to post early for Christmas to help us deliver Christmas.’

Final suggested dates for sending second-class post has been brought forward from December 19 to 12 and for first class from December 21 to 16.

Laura Joseph, Post Office customer experience director, said: ‘December 12 is now likely to be even busier in Post Office branches as customers race to take advantage of the cheaper postage as this is now the last recommended date for sending second-class parcels to arrive for Christmas. 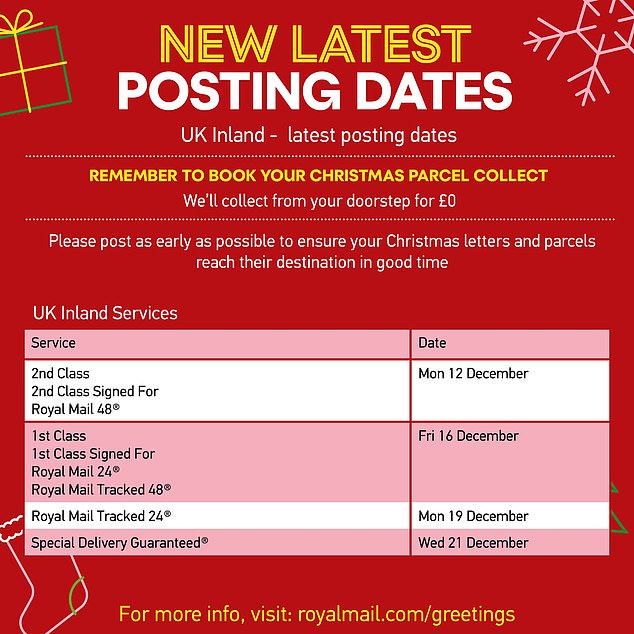 ‘As soon as you’ve got your parcels ready to go, don’t wait to come into branch and get them in the post – many Post Office branches are open long hours and some are open seven days a week so pop into your local branch and get your gifts sent in time for Christmas.’

Britain is set to face widespread industrial unrest in the run up to the Christmas period and also into January as workers are resorting to strikes due to struggles with double-digit inflation in order to demand better pay and working conditions.