Moment terrified North Korean looks at the ground while he is embraced by Kim Jong Un as part of despot’s propaganda stunt, after launching series of missiles towards Japan amid regional tensions

A terrified North Korean soldier was pictured looking at the floor while leader Kim Jong Un embraced him in his latest propaganda stunt.

The despot was visiting Mangyongdae Revolutionary School in Pyongyang, possibly just days after launching a series of missiles in the direction of Japan, escalating tensions in the region.

Established in 1947, the school is a high-profile institution with access only to the Workers’ Party of Korea, Korean People’s Army, administrative and high-ranking officials’ families.

It comes after South Korea scrambled fighter jets this week after Kim Jong Un’s warplanes flew towards the border and launched a ballistic missile into the ocean.

The leader was pictured grinning as he put his arm round the soldier, and cupped his face with his other hand.

The soldier looks at the ground, clearly uncomfortable with the sudden embrace from one of the world’s most infamous dictators.

It was just one of a large number of photos released on Monday, although the exact timing of the leader’s visit to the school, which trains North Korean soldiers, is unknown.

He was accompanied by his wife, Ri Sol Ju, during his trip and was seen posing with various pupils and staff. 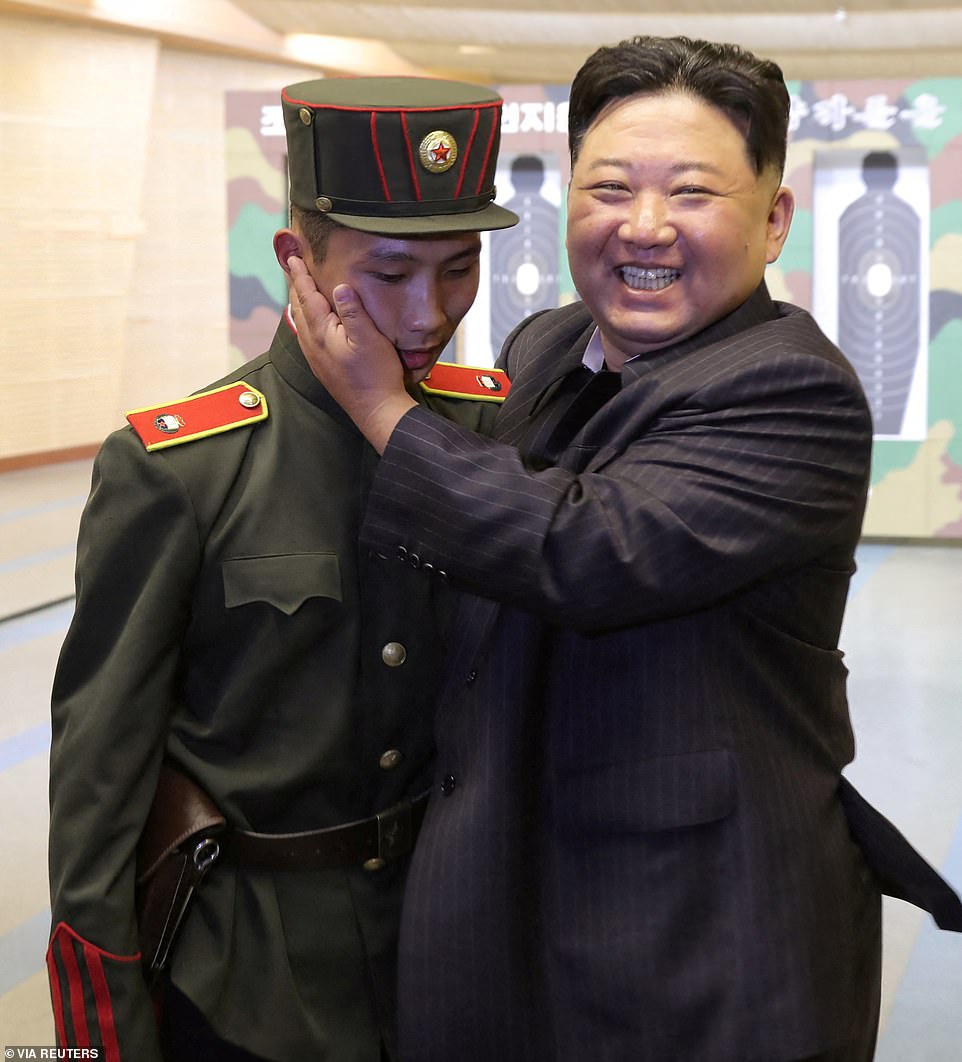 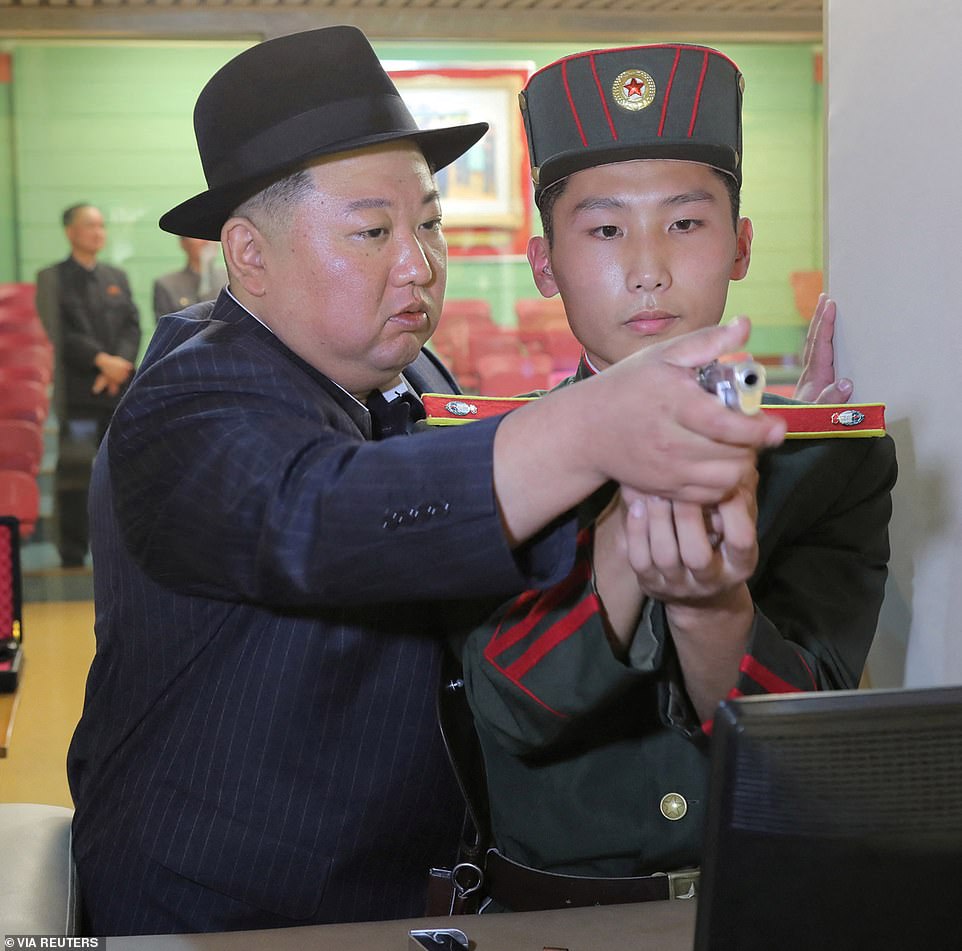 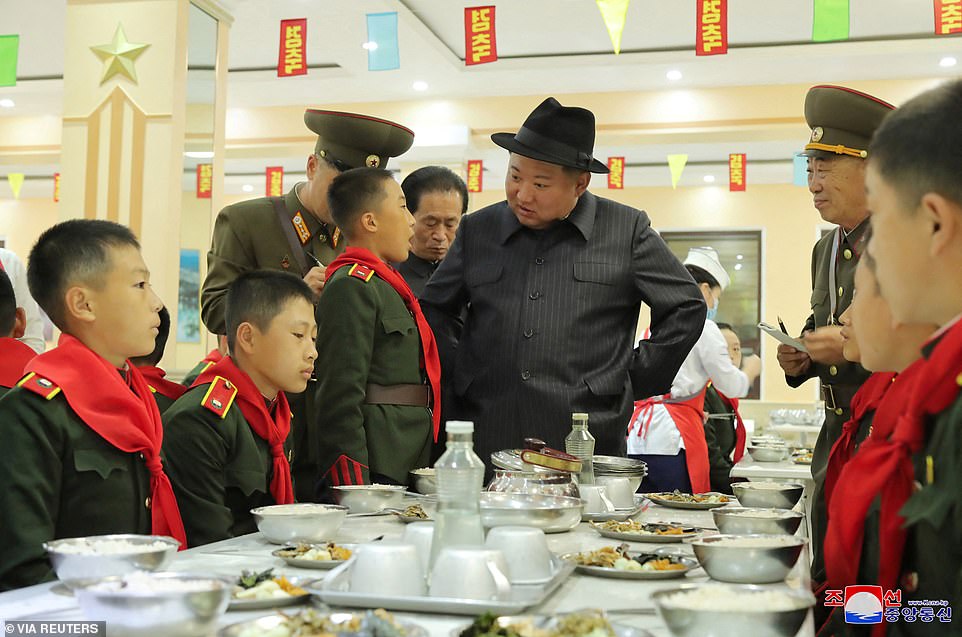 He met young children at the school over a mealtime,, and appeared to examine their military-style uniform as he spoke to them 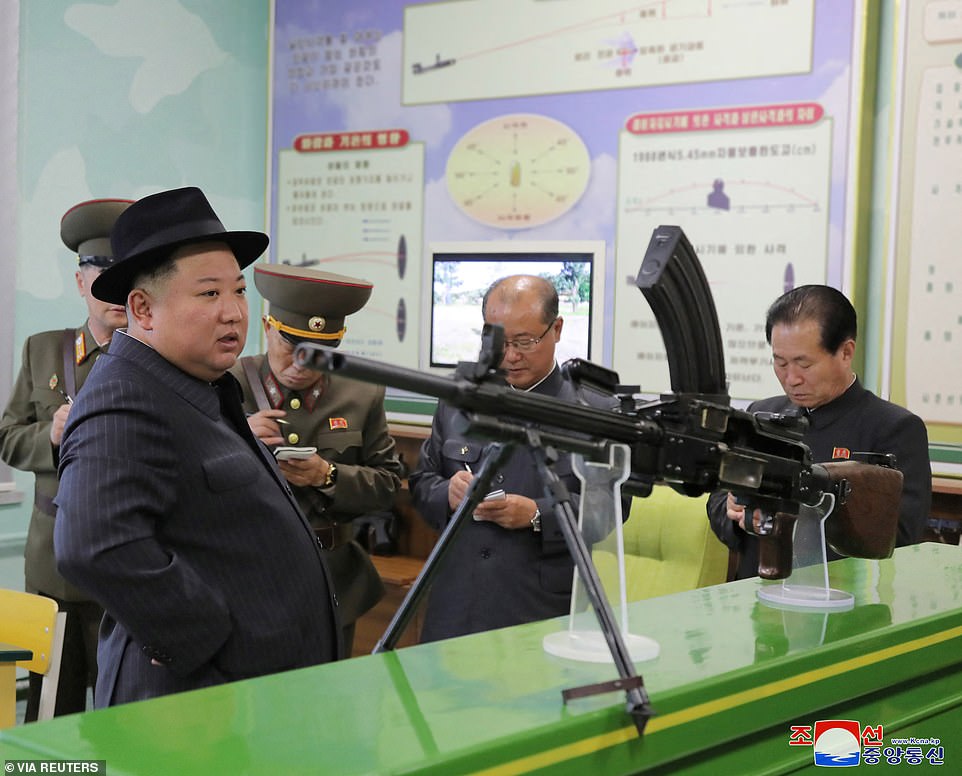 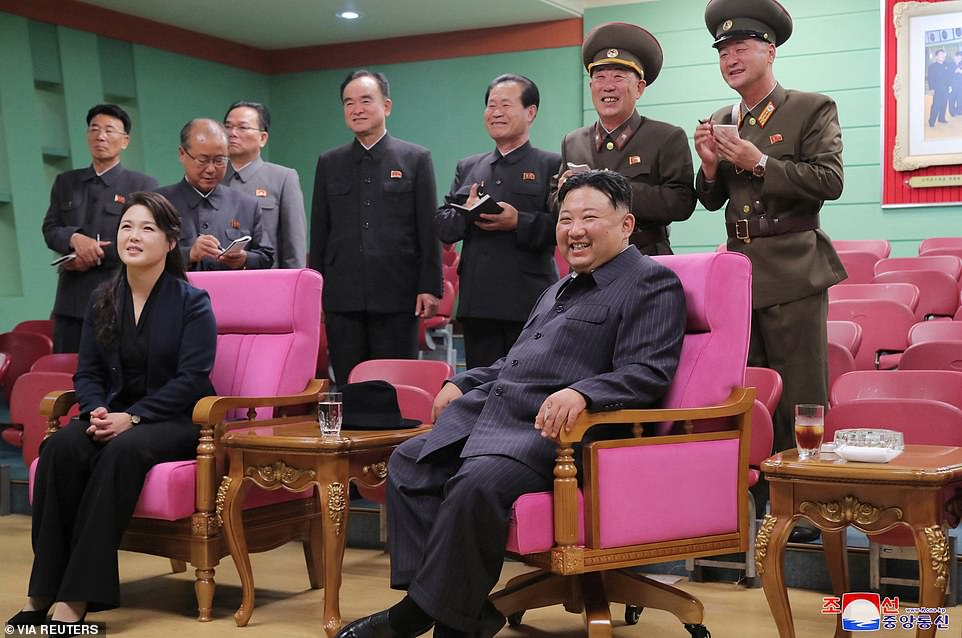 Kim Jong Un smiles at something during his visit, on which he was accompanied by his wife, Ri Sol Ju

Other images showed the leader, who was dressed in a pin-striped suit and black hat, teaching soldiers to shoot guns accurately and examining military equipment.

He was also seen meeting with leaders at the school and attending a meal in the canteen, before watching a demonstration by some of the students.

In another uncomfortable photo, he was seen gripping the legs of students possessively as he posed amidst 15 of the cohort.

The latest propaganda appears to be a show of strength from Jong Un following a raft of military drills and missile tests in previous months, which are concerning neighbouring countries including South Korea and Japan.

Around 10 North Korean military aircraft were seen flying near the de-facto border this week, in what it says is a response to ‘provocative action’ by its southern neighbour.

The South Korean Joint Chiefs of Staff says planes were seen flying as close as 12km north of the boundary between the two countries late on Thursday and early on Friday.

In response F-35 jets and other warplanes were scrambled by the South, while there were no reports of clashes in the air.

Shortly afterwards a short-range ballistic missile was fired by Kim’s troops towards its eastern waters, the latest in a series of launches that have seen tensions rise in the peninsula.

The JCS said the missile lifted off from the North’s capital region at 1.49am and that it had boosted its surveillance posture and maintains military readiness in close coordination with the United States.

It comes a day after the authoritarian country launched two long-range cruise missiles over the Yellow Sea, with Kim saying his nation is ‘at full preparedness for actual war’. 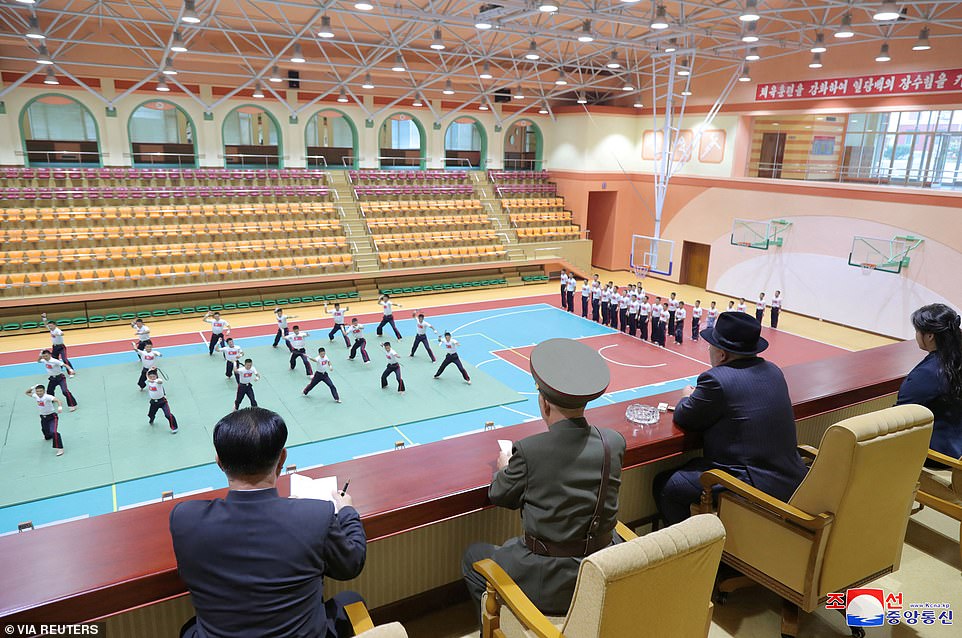 During the trip, the dictator watched a demonstration by students in the gym, where they appeared to be practising martial arts 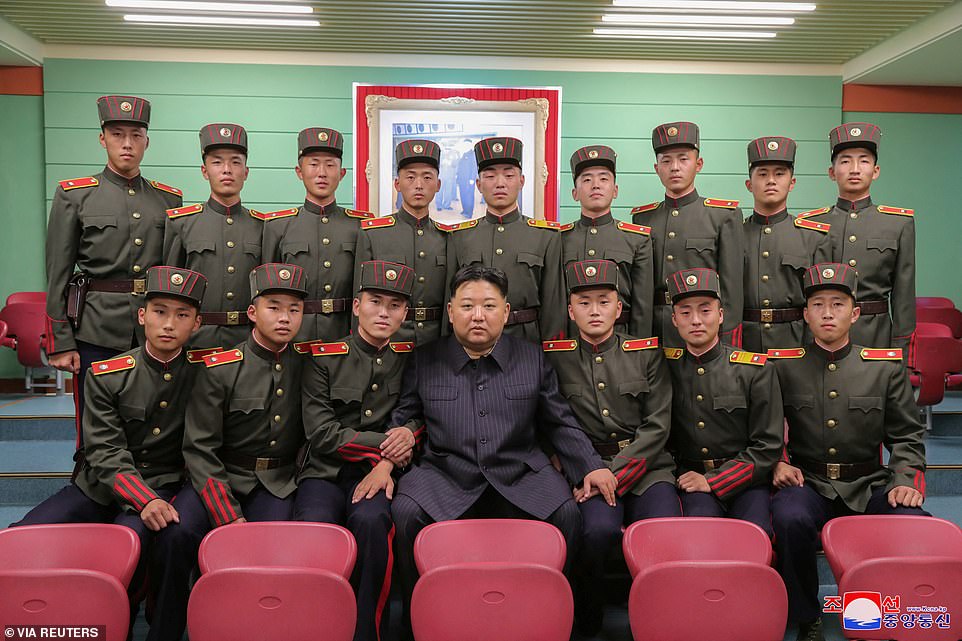 At one point the leader posed for a photograph with 15 students at the school, during which he possesively placed his hands on the legs of those sat either side of him 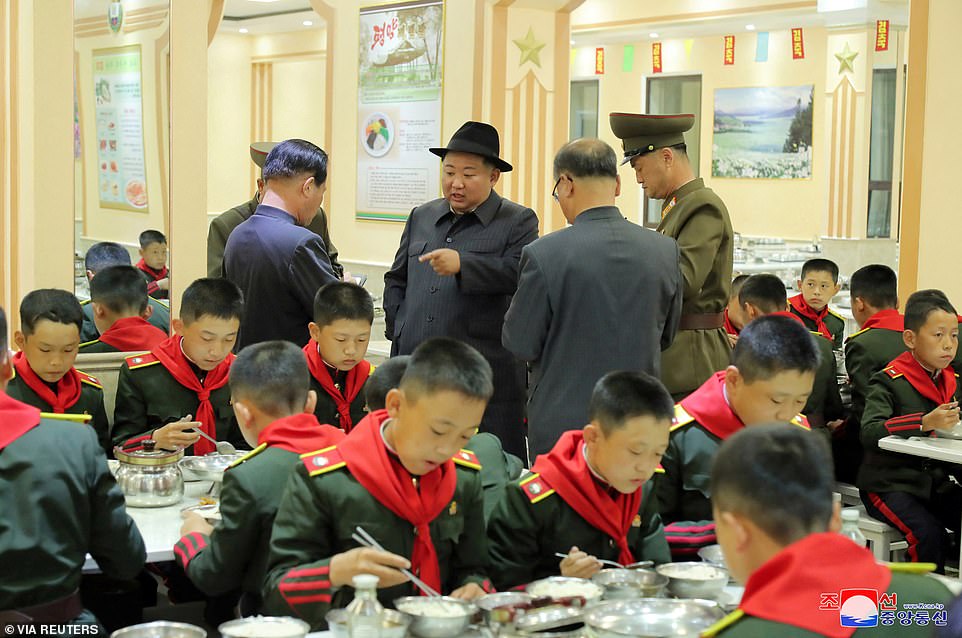 As well as speaking to students during their mealtime, he also seemed to be commenting on the school to staff, who are seen taking notes 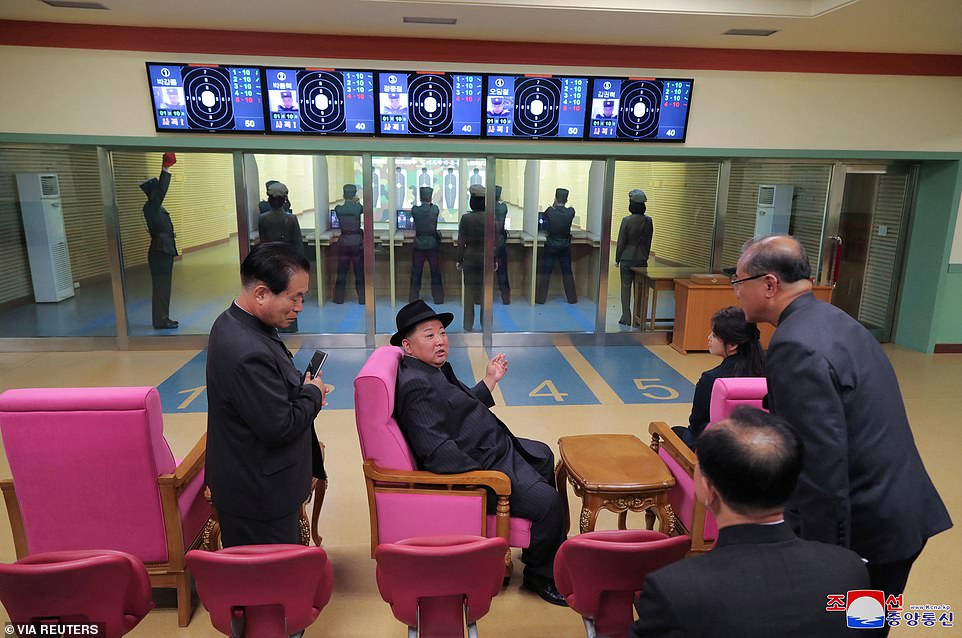 Kim Jong Un observed students while they were at shooting practice, protected by a glass wall, as he chatted with school bosses 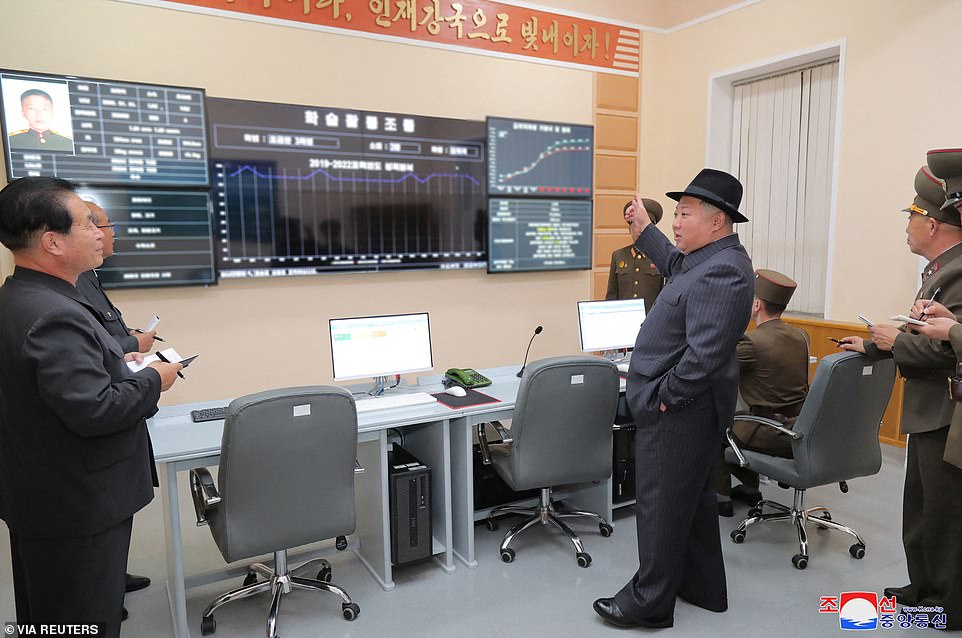 The leader is almost completely isolated on the world stage, but this does not stop him from reminding the west of the country’s military power 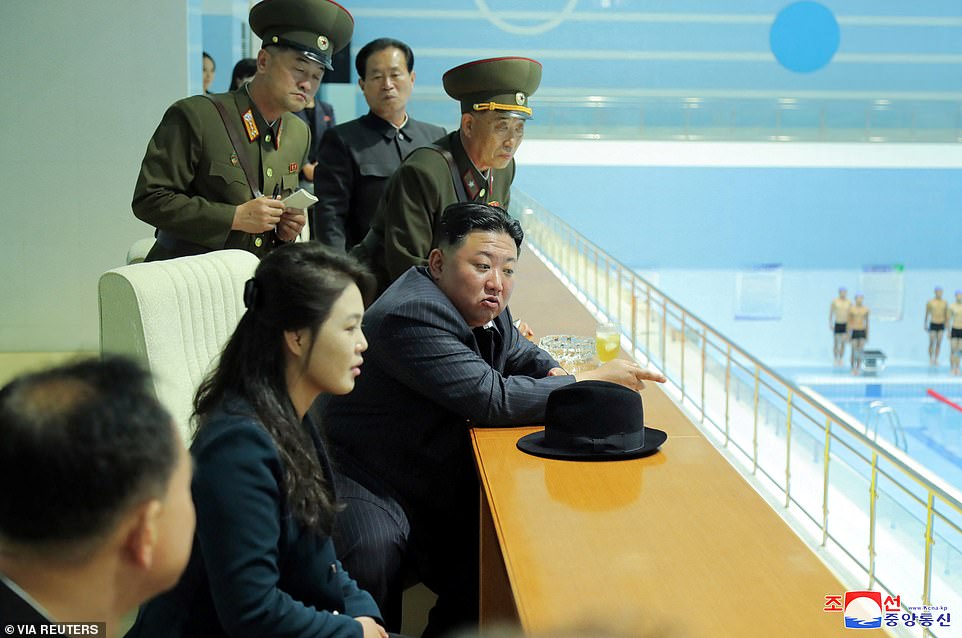 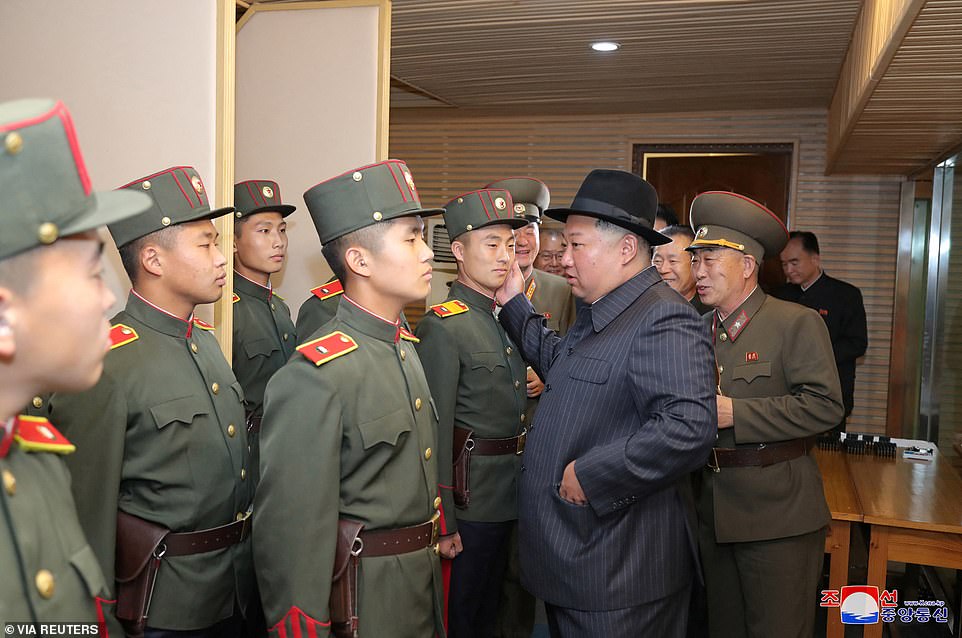 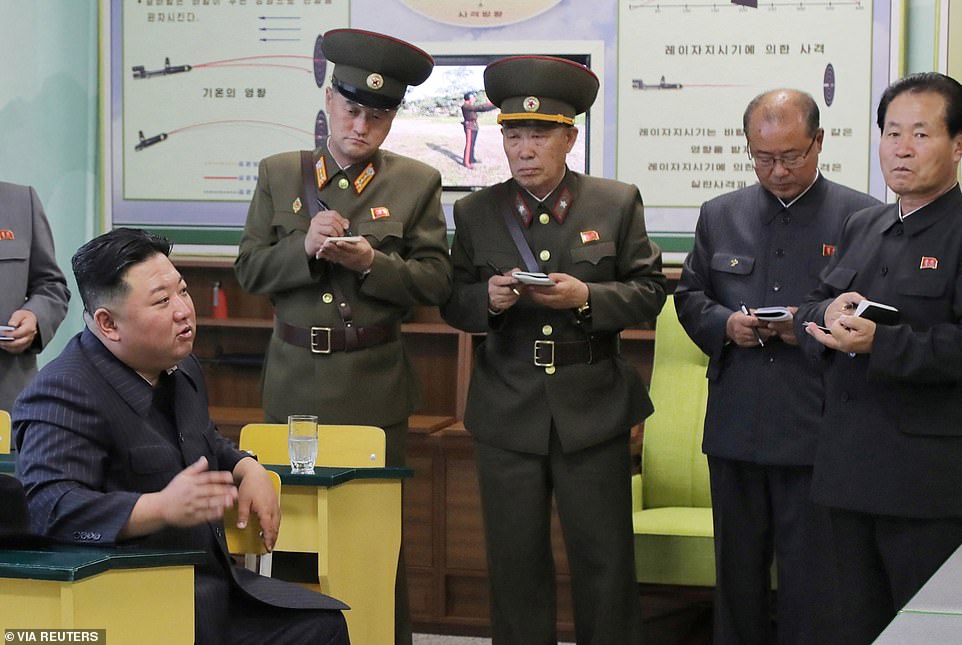 School leaders were seen making notes throughout the visit by their supreme leader, who seemed to be issuing orders and comments on students’ performance

It was the second time in a week that the South has scrambled jets, after Kim sent 12 warplanes close to the border for bombing drills on October 6.

A total of 30 fighter jets were scrambled by South Korea after eight North Korean fighter jets and four bombers flew in chilling formation towards the boundary between the two countries.

They are thought to have carried out air-to-surface firing exercises, with Yonhap media saying they were flown in ‘apparent protest’ to recent bombing drills between the US and South Korea.

The North Korean military said it undertook the latest foray and missile test in response to ‘provocative action’ by Seoul near their common border.

North Korea is all but isolated on the global stage, but continues to intimidate its neighbours and claim to the world that the nation is ready for nuclear war. It is unknown exactly how far the nation has got in its ambition to build its own nuclear weapons.

A North Korean army spokesman said the South Korean army on Thursday had conducted ‘artillery fire for about 10 hours near the forward defence area of the KPA Fifth Corps,’ according to a statement carried by the Korean Central News Agency.

The KPA ‘sends a stern warning to the South Korean military inciting military tension in the frontline area with reckless action,’ the agency’s report said.

Meanwhile, the JCS said the South Korean air force ‘conducted an emergency sortie with its superior air force, including the F-35A, and maintained a response posture, while carrying out a proportional response manoeuvre corresponding to the flight of a North Korean military aircraft’.

A spokesman for South Korea’s military said he had no information regarding the South Korean artillery fire reported by the North.

The U.S. Indo-Pacific Command said it was aware of the latest missile launch and had assessed that ‘it does not pose an immediate threat to U.S. personnel or territory, or to our allies.’

‘We will continue consulting closely with our allies and partners to monitor the DPRK’s destabilising ballistic missile launches,’ it said, referring to North Korea by the initials of its official name.

‘Whatever the intentions are, North Korea’s repeated ballistic missile launches are absolutely impermissible and we cannot overlook its substantial advancement of missile technology,’ Mr Hamada said.

‘North Korea’s series of actions pose threats to Japan, as well as the region and the international community, and are absolutely intolerable.’

It comes a day after the North tested yet more missiles capable of carrying nuclear warheads in the Yellow Sea.

The missiles flew 1,240 miles before moving in oval and figure eight patterns for almost three hours in a display of their apparent manoeuvrability before hitting targets, the Korean Central News Agency said.

Kim personally oversaw the tests as images showed him applauding inside a tunnel with his cronies, a cigarette in his right hand.

He ‘highly appreciated’ the test, state media said afterwards, which showed North Korea’s nuclear forces are at ‘full preparedness for actual war’ and sent a ‘clear warning to the enemies.’

Kim appears to be capitalising on the Ukraine war – which has tied up the UN and its sanctioning body – to carry out tests of weapons that would typically have drawn retaliatory measures.

Though North Korea is not technically forbidden from testing cruise missiles, it has also tested a flurry of ballistic rockets in recent weeks which are forbidden.

Kim is also thought to be gearing up for a banned nuclear test at its underground testing site, which would be its first in five years. 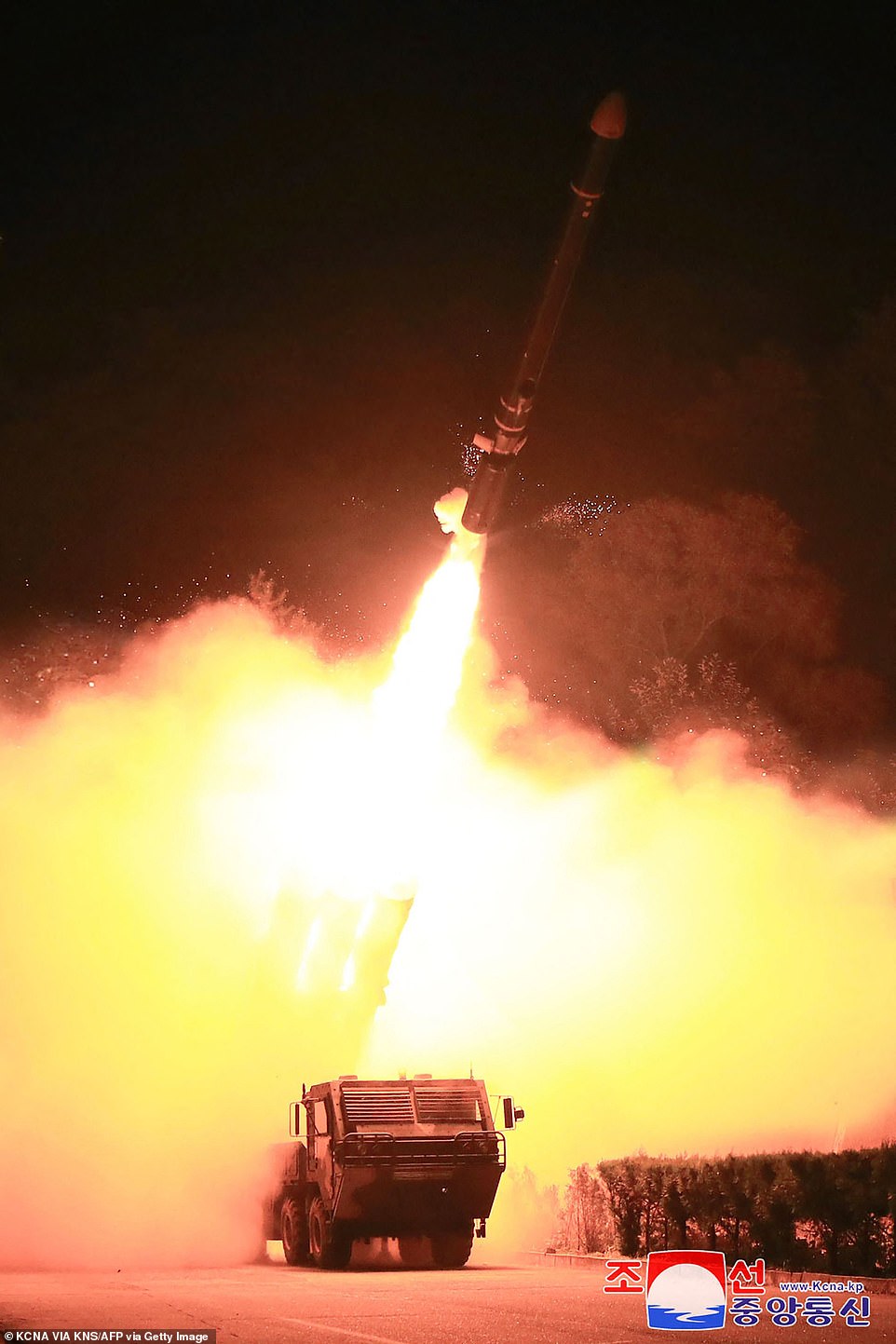 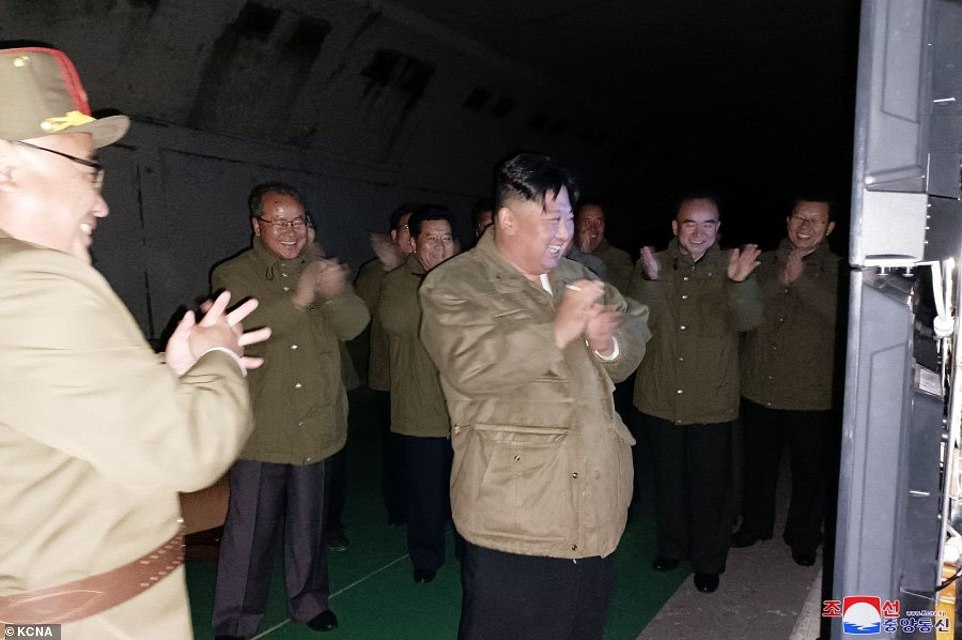 Kim is pictured overseeing the cruise missile test alongside his top officials, applauding with what appears to be a cigarette in his right hand as the weapons hit their targets

Kim made acquiring tactical nukes – smaller, shorter-range weapons designed for battlefield use – a top priority at a key party congress in January 2021.

‘The latest test means the North is operating tactical nuclear capability on cruise missiles, which are harder to detect for their low-altitude flight,’ Hong Min of the Korea Institute for National Unification told AFP.

‘It is a testament to Pyongyang’s capability to mount nuclear warheads,’ he said, adding that cruise missiles can also have irregular flight paths making them harder to intercept.

Many experts believe Kim’s goal is to eventually win US recognition as a legitimate nuclear state and the lifting of said sanctions, though the international community to date has shown no sign of allowing that to happen.