Roads more congested on weekends than weekday after pandemic

The weekend rush-hour: Roads are so congested between 7am and 7pm on Saturdays and Sundays after pandemic that it takes LONGER to reach destination than during weekday mornings and evenings

Roads are more congested on weekends than rush hours and the average speed of traffic in cities has gone down by as much as 2.5mph in the past three years, since before the pandemic.

It is taking motorists travelling between 7am and 7pm on Saturdays and Sundays longer than those travelling during weekday rush hours of 7am to 9am and 4pm to 7pm, according to traffic data.

Results are based off analysis from journey times in three of England’s largest cities: Birmingham, London and Manchester. 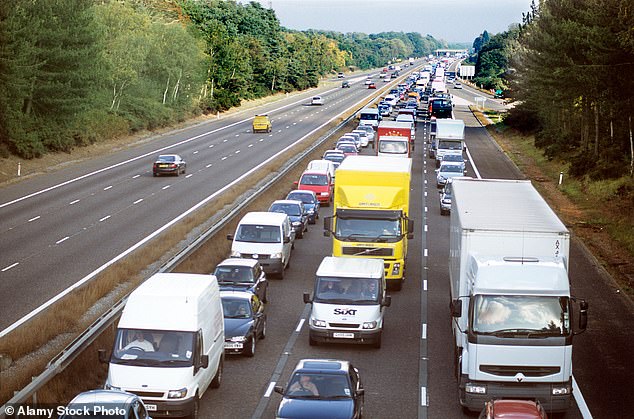 The average speed of traffic in cities has gone down by as much as 2.5mph in the past three years, since before the pandemic

Dan Saunders, head of product at Basemap, a transport data firm that conducted the analysis told the Times: ‘Since the pandemic, the problems of morning and afternoon peaks are spreading to other times of the day and week.’

Basemap’s model of traffic is used by the Department for Transport.

London is even slower, with average speeds dropping from 14.6mph to 12.56mph. 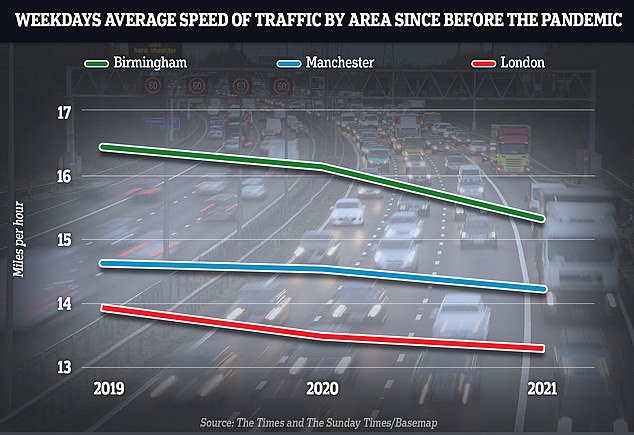 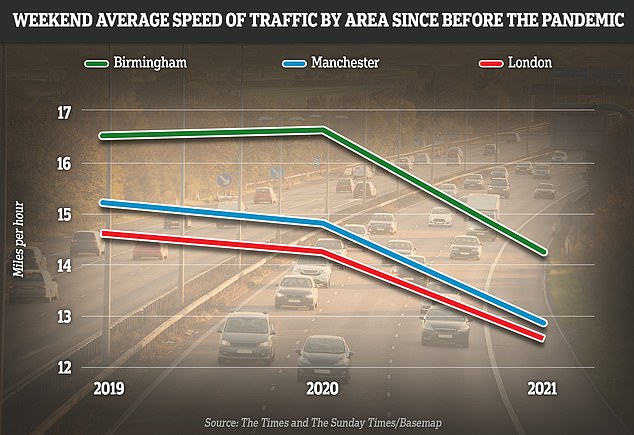 The current situation could be a consequence of public transport, as many people elected for motor travel when the pandemic hit – and have still not returned.

National rail travel has been at about 88 per cent of pre-pandemic levels, with bus passengers outside London at 91 per cent and London Underground passengers at 80 per cent.

In contrast, van traffic, serving the boom in online shopping and grocery deliveries, is at 116 per cent of pre-pandemic levels and car traffic at 96 per cent, according to Department for Transport figures for the week to October 3.

While road travel is at high levels, the capacity of roads are being reduced by the government’s desire to make urban living better.

As part of this drive, measures include the spread of 20mph restrictions, the creation of low-traffic neighbourhoods and more dedicated cycle lanes. 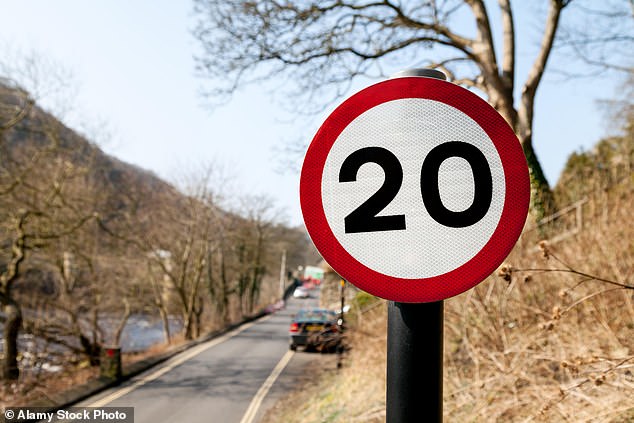 Capacity of roads are being reduced by the government’s desire to make urban living better. As part of this drive, measures include the spread of 20mph restrictions

Nick Owen, head of network performance at Transport for London, said a 1mph drop in the speed of a bus journey cost the authority about £200 million a year as passengers stayed away, the Times reported.

Owen has been conducting a trial in the borough of Islington to remove setbacks by managing roadworks better and by rephasing traffic lights where necessary.

Measures included reducing the time vehicles had to wait for a green light from 265 seconds to 140 seconds, to avoid vehicles rerouting to smaller roads to avoid a delay.

Six other boroughs have now expressed an interest following the results of this trial, as have Transport for the North and the transport authorities for Greater Manchester and the West Midlands. 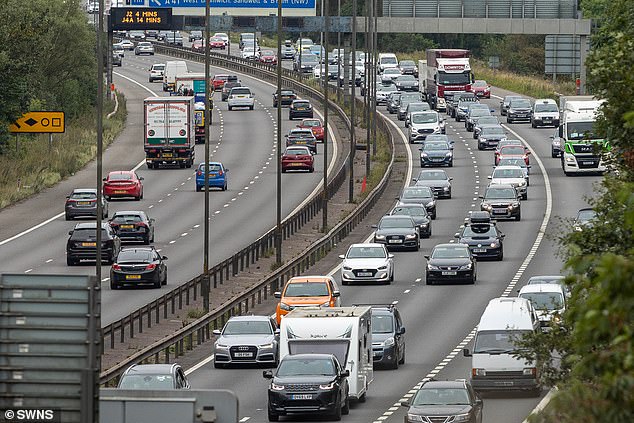 The current situation could be a consequence of public transport, as many people elected for motor travel when the pandemic hit – and have still not returned

Danny Dorling, Halford Mackinder professor of geography at Oxford, said it was wrong to blame measures intended to improve safety and encourage walking and cycling.

‘The changes to our road system, whether 20mph speed restrictions or low-traffic neighbourhoods, are far too small to account for this slowdown in speed. The big thing that has happened is that more people are trying to use their cars in different ways than before the pandemic. It does not take much of an increase to suddenly have this effect.’

He said it was possible to reduce journey times without raising speed limits and reducing safety: ‘If buses can actually go at 20mph, the journey is much faster than if they were travelling on a road where the official speed limit is 30mph but congestion means that you’re very often going under 10mph.’

David Milner, deputy director of Create Streets, a charitable foundation that has influenced government planning policy, said: ‘Private cars are an inefficient use of space in towns and cities.’

Edmund King, president of the AA, suggested gridlock might be eased with ‘quality park and ride or park and ebike facilities’, with banks of slower electric vehicle chargers for commuters to leave their cars to charge during the day. ‘Gridlocked cities will only push out more residents and commuters to the suburbs and beyond,’ he said.