The beautiful poet who is 'nursing Salman Rushdie back to health'

She is the beautiful poet 32 years his junior who is believed to be helping nurse Sir Salman Rushdie back to health.

Rachel Eliza Griffiths, 43, enjoyed a romantic ‘writer’s retreat’ with Sir Salman in a 15th-century Italian castle just weeks before a crazed knifeman tried to stab the 75-year-old author of The Satanic Verses to death.

‘I did ask him if he had any security concerns as I am able to ask the carabinieri [police] to attend our events, or be present at the entrance, and he said, ‘Absolutely not, that is in my past.”

Ms Prescott said the couple gave a joint talk at the castle. 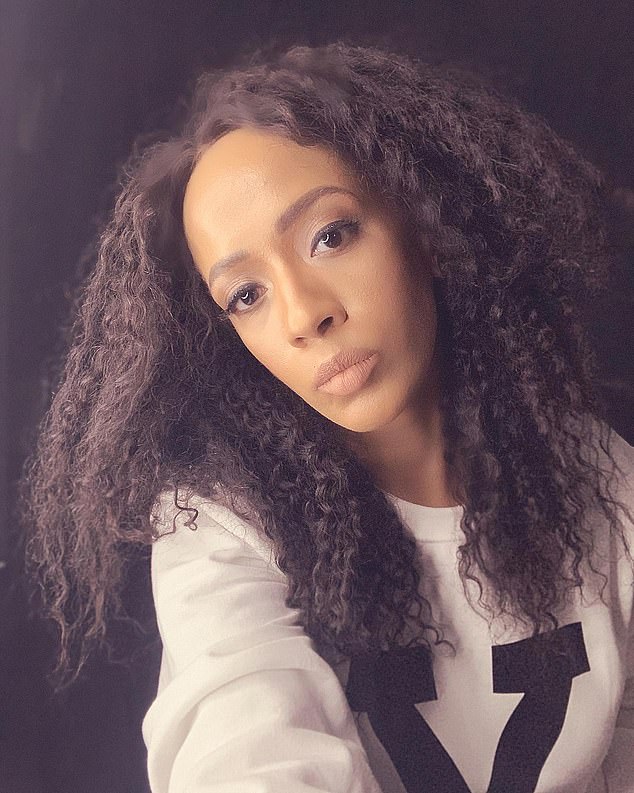 Sir Salman has been under a ‘fatwa’, or death sentence, since 1989 when his controversial novel was called blasphemous by some Muslims.

Last night he remained in hospital with life-changing injuries after being stabbed 15 times in the neck and torso at a literary event in New York state on August 12. His agent has said he may lose an eye.

It is unclear when love first blossomed for American-born Ms Griffiths and the author.

Her social media account contains photographs of the pair at events beginning in 2017 and she was by Sir Salman’s side when he celebrated his 72nd birthday in London in June 2019.

They were photographed together at literary gatherings in New York and London earlier this year.

She is represented by the same New York literary agency, Wylie, as four times-married Sir Salman.

His last wife was Padma Lakshmi, the television host and model, with the couple splitting in 2007.

When Ms Griffiths published her first book of poems and photographs in 2020, Seeing The Body, she cryptically thanked: ‘My beautiful and extraordinary love, S.’

Public records in the US appear to show Ms Griffiths and Sir Salman may have purchased a home together in Delaware earlier this year.

While she has declined to comment publicly on the attack, she posted a photograph on Instagram for her 6,500 followers this week of herself in a field of sunflowers writing: ‘Gathering every strength and wound love gives us. Let me have awe’, followed by a praying hands emoji. 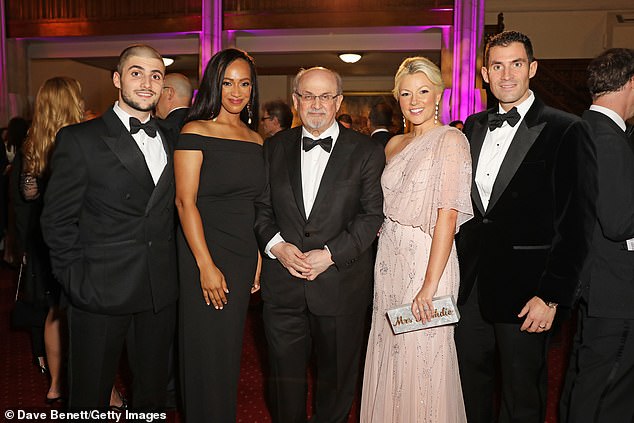 She appears to have been embraced by Sir Salman’s family, with his younger sister Sameen posting birthday wishes to Ms Griffiths on social media.

A source told The Mail on Sunday: ‘Rachel is beautiful and talented and it is no wonder Salman is besotted by her.

‘But she clearly wants to be recognised as an artist in her own right. She and Salman have been photographed together over the years.

‘She has never spoken publicly about their relationship and nor has he. But it is an open secret that they are together.’

On Friday, hundreds of Rushdie supporters gathered in front of the New York Public Library to show support for the injured author. Writers including Gay Talese, Colum McCann and Tina Brown, joined the crowd.

American novelist Jeffrey Eugenides told how he was so in awe of Rushdie he decided to visit him in London in the 1980s: ‘I looked him up in the London phone book.

‘There it was, under the Rs – Rushdie, Salman, along with an address and a telephone number.

‘That was a world we used to live in . . . that world was called civilisation.’

Chairman of a British-based Islamic Human Rights Commission — that has has received more than £1.4 million in charity cash — praised the fatwa on Sir Salman Rushdie less than a year ago

By Max Aitchison for The Mail on Sunday

The chairman of a British-based human rights organisation which has received over £1.4 million in charity cash praised the fatwa on Sir Salman Rushdie less than a year ago, The Mail on Sunday can reveal.

Massoud Shadjareh, founder and chairman of the controversial Islamic Human Rights Commission (IHRC), spoke fondly of the death sentence imposed on the writer in 1989 following the publication of his novel The Satanic Verses. 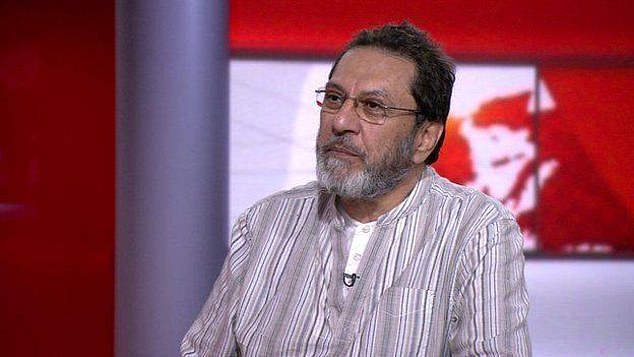 The IHRC, which has been described by former Labour leader Jeremy Corbyn as representing ‘all that’s best in Islam’, is closely aligned with Iran and its leaders have previously declared the West as ‘the enemy’.

It has shown support for terrorists detained in the UK and the US, including hate preacher Abu Hamza.

Addressing an Islamophobia conference last December, Mr Shadjareh said: ‘I am old enough to remember what was happening at the time of the Rushdie affair.

We weren’t organised as a Muslim community. We didn’t even have any huge national umbrella organisations.

‘But ordinary Muslims from all different backgrounds, even those who were not fully practicing, they came with the understanding that this was wrong and they supported the fatwa against this.’

Mr Shadjareh, 70, has previously described Iran’s infamous supreme leader Ayatollah Khomeni, who issued the fatwa, as a ‘torch of light for the whole of mankind’.

The IHRC is primarily funded by its charitable arm, the Islamic Human Rights Commission Trust, which shares the same address in Wembley, North London.

The charity has funnelled more than £1.4 million in donations to the IHRC and has benefited from over £300,000 in taxpayer-funded gift aid donations over the last six years.

The IHRC Trust charity also received over £20,000 in Government grants during the pandemic.

The Charity Commission conducted a two-year investigation into the relationship between the IHRC and its trust, but did not order any changes.

The IHRC also organises the annual Al Quds march in London, at which many attendees wave the flag of Hezbollah, the Iran-backed Lebanese terror group outlawed by the Home Secretary in 2019.

In 2020, Mr Shadjareh spoke at a vigil held for the Iranian general Qasem Soleimani after he was killed by the US.

He said: ‘We work hard to make sure there will be many, many more Qasem Soleimanis. We aspire to become like him.’

Sir Salman suffered a damaged liver as well as severed nerves in an arm and eye injuries in the ferocious attack in New York last weekend.

His alleged attacker, Hadi Matar, praised the Ayatollah in an interview from prison last week and described Sir Salman was ‘someone who attacked Islam’. 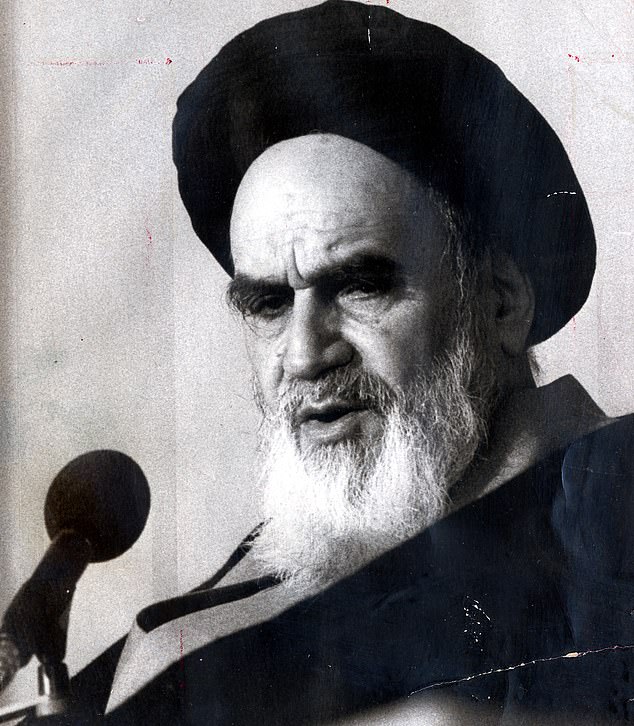 Mr Matar, 24, has pleaded not guilty to the attack.

Dr Alan Mendoza, executive director of the Henry Jackson Society, said: ‘The IHRC is a concerning organisation that has given its support to numerous controversial and dangerous causes over the years.

‘Its chairman now being linked to pro-Rushdie fatwa rhetoric merely reinforces the idea that whatever the division of its structure, no government funding should be directed to it.’

A report published by the Henry Jackson society in 2019 concluded that the IHRC is an ‘institutionally pro-terrorist and anti-Semitic organisation’. 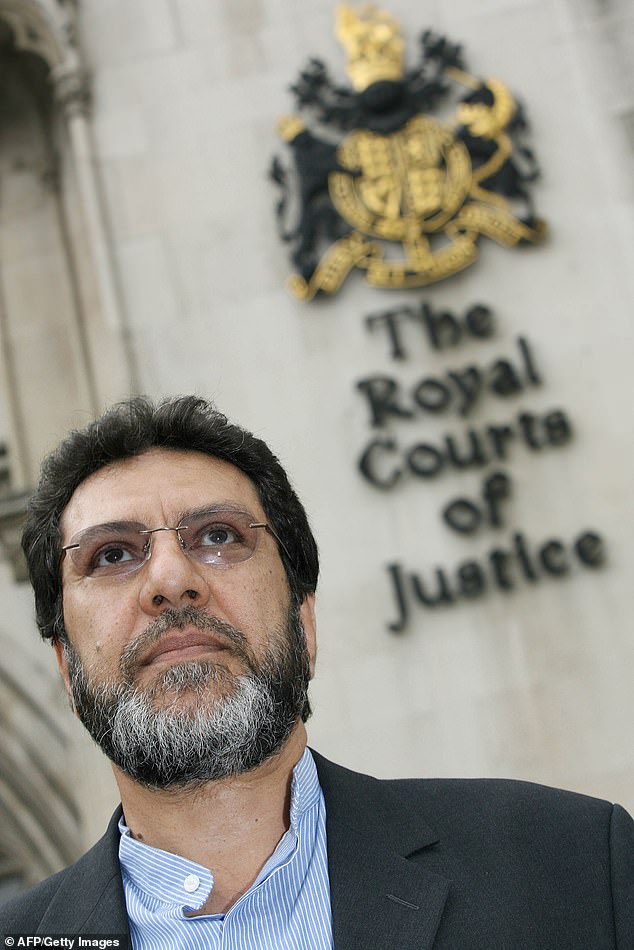 He said: ‘It seems The Mail on Sunday does not understand the talk I gave in December 2021 or more broadly the issues around the ‘fatwa’ and the Muslim community’s response to it.

‘In the spirit of honesty, openness and inquiry I suggest they organise an event where I and maybe one of their contributors such as Peter Hitchens can have a discussion about the affair, and what Muslims in general and I in particular feel about the matter.’