Why Melania Trump is now ready for a second tilt as the First Lady: Enemies said they’d split as soon as Donald left the White House, but as HE hints he’ll run again, friends paint HER as the power behind the throne

This was just days after FBI agents had stormed the Trumps’ magnificent Mar- a-Lago estate in Palm Beach, Florida (dubbed the ‘Winter White House during his presidency), looking for classified documents, allegedly rummaging through Melania’s underwear drawer in the process.

But, if the former First Lady, 52, felt any anger or emotion about the raid on her home, as always, she wasn’t showing it.

She simply glided towards a limousine, surrounded by secret service agents, and was whisked back to the three-storey penthouse she shares with her 76-year-old husband and 16-year-old son Barron, in New York’s gleaming Trump Tower. 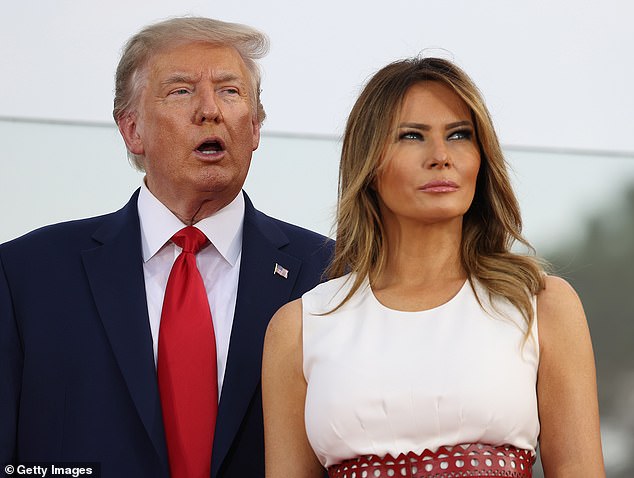 The former First Lady has been quietly rebuilding her life away from the spotlight. Pictured: Melania and Donald Trump in July 2020

By now it is a familiar routine.

While many speculated Melania would leave her husband of 17 years the moment Marine One, the presidential helicopter, departed the White House front lawn at the chaotic end of his term in office, that has not turned out to be the case.

Instead, the former First Lady has been quietly rebuilding her life away from the spotlight.

‘I get mad every time I read false stories about how she and Donald are going to divorce, and how they lead separate lives,’ she told The Mail on Sunday.

‘I’ve known Donald since 2010, when my husband and I joined the club at Mar-a-Lago. I met Melania a short time after.

‘Since then, I’ve been to more parties with them than I can count: birthdays for Barron. Thanksgiving. Barbecues.

‘The Melania I know is sweet, kind, natural, classy and puts her family above everything else. She constantly gets a bad rap because people love to hate the Trumps. 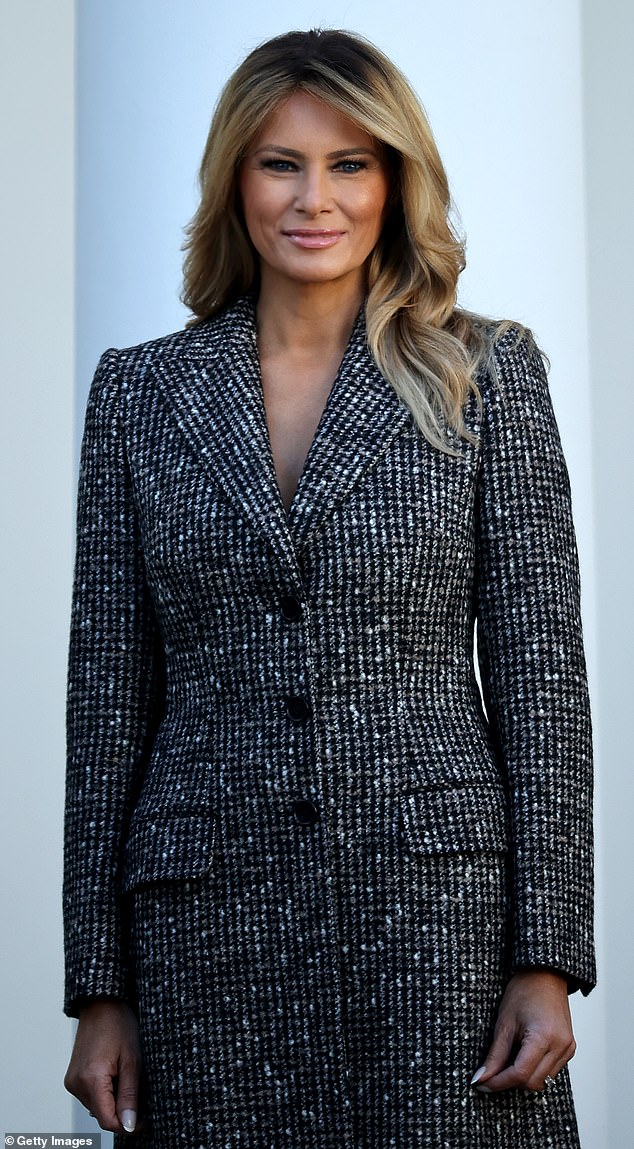 Asked if she fancied another stint as First Lady, Melania’s reply was characteristically enigmatic: ‘Never say never.’ Pictured: Melania at the traditional ‘pardoning’ of a presidential Turkey in 2020

‘Who can blame her for wanting to keep a low public profile? She hasn’t been hiding. I’ve seen her in the spa. She and Donald are always in the restaurants at Mar-a-Lago.’

While focusing on family and the charitable causes that interest her, Melania set up a website earlier this year to raise money for children’s charities, selling digital artwork for $150 a time, including a close-up portrait of her eyes and a sepia-toned image of her face.

In May, she made a rare public appearance to Place of Hope, a foster care agency in Palm Beach.

Friends say that, for the most part, she has been living in the 3,500 sq ft private residence at Mar-a-Lago, which is also an exclusive private club offering carefully vetted members the chance to join for a one-off $250,000 fee and annual dues of $16,000.

She swims laps in the Olympic-sized pool, plays tennis three times a week on the private courts, hosts parties in the ballroom and has facials and massages at the spa.

Perhaps most importantly – in an America so riven by politics, many fear it is on the brink of civil war – Mar-a-Lago is a fortress.

It has a 50 ft watchtower and an army of private armed security guards to complement the Trump family’s secret service protection given to all former presidents.

Mrs Holt Kramer says: ‘Mrs Trump has never made any secret of the fact that she considers being a wife and mother her greatest accomplishment. Perhaps that is why so many people attack her? I guess that’s not a fashionable thing to say any more.’

Contrary, though, to all the fervid speculation – mostly fostered by Trump’s enemies as he ponders whether to stand for President again in the 2024 election – not only are Donald and Melania very much together, but she increasingly seems to be the power behind the throne.

If it is Donald Trump’s outsized personality and magnetic media presence that draws in millions of supporters – and campaign dollars – from America’s vast interior, it is Melania’s polished elegance and carefully executed role as a traditional wife that have done so much to keep Republican women in the fold.

And Trump knows it well. Mrs Holt Kramer says she watched the couple earlier this year on the candle-lit terrace at Mar-a-Lago, and, for two hours, she told The Mail on Sunday, ‘Donald was hanging on every word of his wife’.

For her part, Melania ‘seemed oblivious to all else’.

‘He absolutely trusts her judgment on everything.’ Another source said that as ‘Mrs Trump’, she holds a lot of power. ‘Conservative women admire her for being a perfect wife. 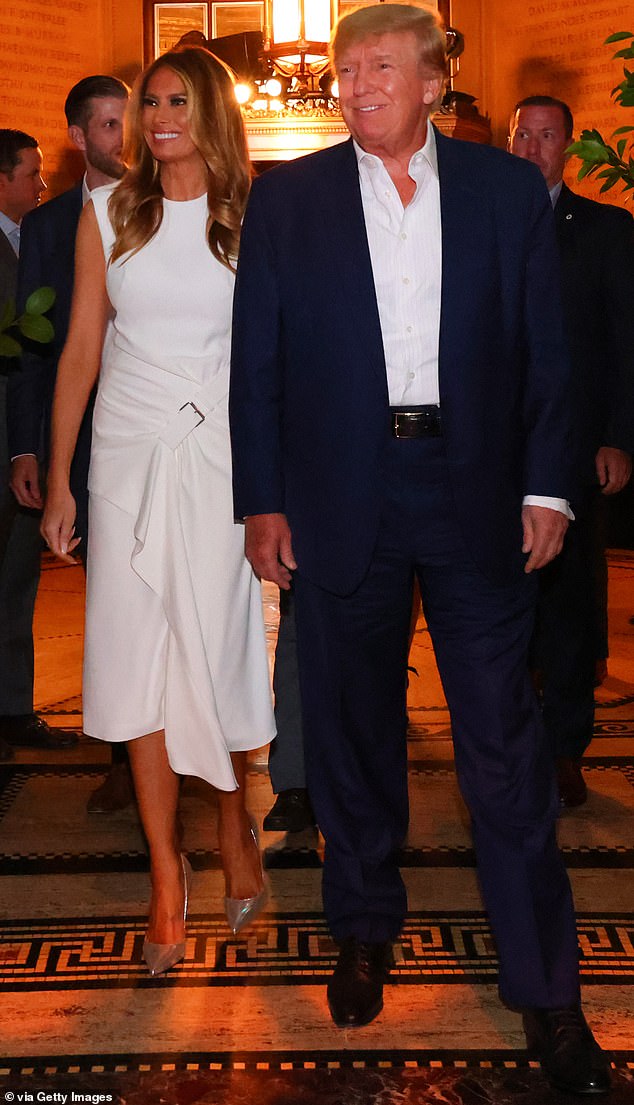 Many speculated Melania would leave her husband of 17 years the moment Marine One, the presidential helicopter, departed the White House front lawn at the chaotic end of his term in office, that has not turned out to be the case. Pictured: Melania and Donald in July this year

‘She arrived in America from Slovenia with nothing, and had her own career as a model and then married a billionaire.

‘She’s aspirational. She looks immaculate. She supports her husband. She turns up when he needs her. Make no mistake, she knows how valuable she is to Trump – and so does he. Melania is one of the few people he listens to and trusts implicitly. He always says, “She’s got my back.” ’

While Mrs Trump’s office did not respond to a request for an interview, The Mail on Sunday spoke to several close confidantes of Melania who paint a picture of a woman content with life away from the Washington DC ‘fishbowl’.

Intriguingly, none wanted to be quoted on record, for fear of angering Melania who distrusts the press and blames America’s media for conducting a vendetta against her husband – and her.

While Melania’s detractors have painted her as aloof and uncaring and say she was never fully engaged as First Lady, her supporters say she has been forced to put up protective barriers.

Former close friends, including her ex-press secretary Stephanie Grisham and senior adviser Stephanie Winston Wolkoff, both wrote scathing books about Melania. ‘She’s been burned and betrayed by people she trusted,’ said one person who declined to go on record. ‘The only people she really trusts are her family.

‘There have been stories about her being dumb. She’s not dumb. She does what she wants to do, like Donald. They don’t answer to anyone, and they don’t care what people think about them. Melania lives in her own little bubble. No one makes her do anything she doesn’t want to do.’

And so to the $64,000 question. Will Melania ever return to the White House? Toni Holt Kramer expects to see her friend on October 31, when Melania hosts Mar-a-Lago’s famous Halloween party, which marks the formal start of the winter season at the club.

She is so enamoured, she has founded the TrumpettesUSA group to encourage female support. She says: ‘I believe Donald will run again, and win – and Melania will be right there beside him.’

And as for Melania? She has given just one interview since leaving the White House – to America’s Fox & Friends Weekend show. Asked if she fancied another stint as First Lady, her reply was characteristically enigmatic: ‘Never say never.’