Time for the Coalition to start thinking about the long term

After the 2007 Rudd-slide, Labor ruled from sea to sea, holding government in every state and territory – crowning Brisbane lord mayor Campbell Newman the most senior Liberal in the land.

A cruel twist of the blade was John Howard losing his seat of Bennelong, joining Stanley Melbourne Bruce as one of just two prime ministers to be dispatched from parliament at a poll. Many wondered aloud if this marked the end of conservative politics.

A supporter plays with a balloon before Kevin Rudd delivers his acceptance speech in 2007.Credit:AP

Kevin Rudd was wildly popular, apparently unassailable and rode the Zeitgeist like a professional surfer. Brendan Nelson’s rating as preferred prime minister sank to 9 per cent, marking a historic low for an opposition leader.

Australia was deep in the grip of the Millennium Drought and the nation was seized by a mood for climate action. Rudd’s first act as prime minister was to sign the Kyoto Protocol, something the Howard government had refused to do.

Ten days after the election, he flew to the United Nations climate change conference in Bali to personally hand the document to the UN secretary-general. He described climate change as “one of the greatest moral, economic and environmental challenges of our age” and received a standing ovation from the delegates.

At the first sitting of parliament in February 2008, Rudd made the historic apology to the stolen generations. Nelson hit a discordant note with his speech in reply and the drumbeat of discontent in his leadership rose. 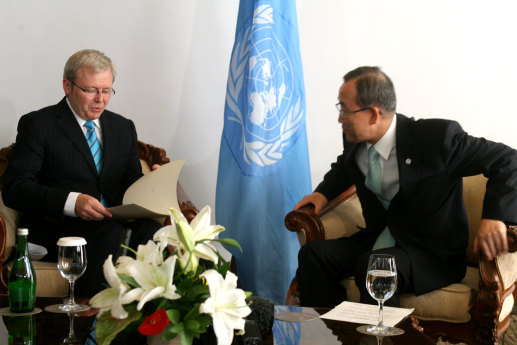 Then-prime minister Kevin Rudd hands over the signed Kyoto agreement to the then-United Nations secretary-general as part of the 2007 UN Climate Change Conference in Bali.Credit:Fairfax

But by the end of 2009, Labor’s wheels were beginning to wobble after the rise in asylum seeker boats in the wake of the government unwinding the Howard-era Pacific solution.

Then politics in Australia broke in December 2009 when the Nationals and Greens combined to sink Rudd’s carbon-cutting plan. So the singular moment at which Australia could have had a bipartisan settlement on climate was lost.

Rudd went to a bitterly cold Copenhagen for the December UN climate conference without his plan and then witnessed China sink the talks. In January 2010, he resisted internal calls for an early election, which Labor elder senator John Faulkner would later describe as the biggest political mistake since Federation.

The opposition was now led by a stone-cold political killer in Tony Abbott, the long drought had broken and people’s fears about climate began to wane. And politics turned like the weather. 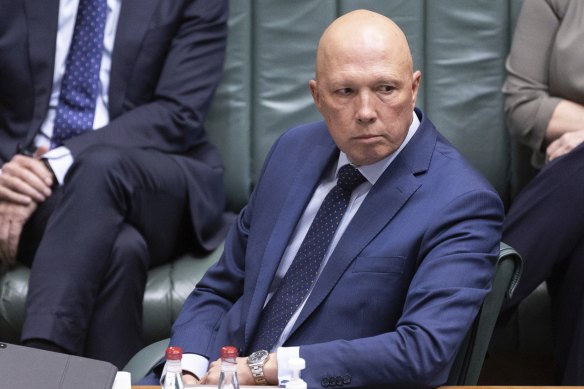 Opposition Leader Peter Dutton. The Coalition has to start the hard work of thinking about the long term.Credit:SMH

In April, Rudd dumped his plans for an emissions trading scheme and his poll numbers collapsed. A politician can abandon a lot of policies and survive but abandoning a principle is fatal. Rudd had called the population to a war footing on climate, then the general cut and ran. By late June, his party had abandoned him.

Now led by Julia Gillard, Labor lost 11 seats at the August election and was reduced to minority government.

Mark Twain said history doesn’t repeat itself but often rhymes, and there are some eerie similarities between the last Labor government and this one. So an optimist in the Coalition’s ranks might believe history offers hope that the path back to government will be shorter than it looks from here.

But there are also stark differences. The biggest is summed in one bleak number: the Coalition’s primary vote of 35.7 per cent. When Howard lost in November 2007, that number was 42 per cent.

Then there’s the legacy of a trillion dollars in gross federal government debt. In 2007 Australia’s gross debt was $55 billion and net debt was below zero. Not discounting the cost of the pandemic, it will be tough for the Coalition to mount an argument that it is better with money than Labor. That removes one of its touchstones.

Finally, in 2007 there was no real anger at the Coalition or Howard. The prime minister was seen as competent but out of touch. Rudd essentially promised to be a younger funkier version of the incumbent, going so far as to describe himself as an “economic conservative”. In May, the Nationals held their ground but the anger against Scott Morrison and the Liberals was visceral and the party bled seats to Labor, the Greens and Independents.

To look down on the Coalition in parliament now is to see a sea of grey and blue suits that jars against the colourful and diverse sweep across the crossbench to Labor. It leaves the sense of a political movement out of time.

The Coalition, and particularly the Liberal Party, has to do what few in politics do any more – the hard work of thinking about the long term. It must make the time to revisit its roots and reimagine itself for the 21st century.

It must find some point of connection between its values and the young. It must appeal to women. It’s easy to say and hard to do and the answers are not obvious. But, without it, the road back to government will only get longer.