Two men have been charged with recklessly driving an unregistered car at 119 kilometres an hour while one lay on the bonnet drinking and giving the middle finger to a speed camera.

At 2.20am on October 23 last year, a fixed speed camera in Gabbadah, about an hour north of Perth, allegedly caught the pair in a Ford utility driving well over the 100 kilometre per hour limit. 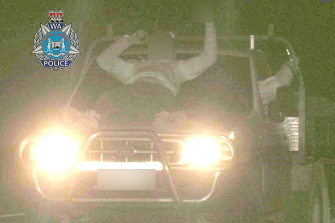 An image captured by the speed camera shows a man lying on the bonnet of the car while raising the middle finger at the camera. Credit:WA Police

A police statement alleged a man was pictured laying on the bonnet of the vehicle, “holding a bottle in one hand, and gesticulating towards the speed camera with the middle finger of his other hand”.

The alleged driver, a 23-year-old man from Gabbadah, has been charged with reckless driving, drove, caused or permitted a vehicle with a forged, replica or false plate to be driven on a road, and using an unlicensed vehicle.

A 31-year-old man from Guilderton, alleged to be the man on the bonnet of the vehicle, has been charged with reckless driving.

Both men will appear in Joondalup Magistrates Court on Friday.