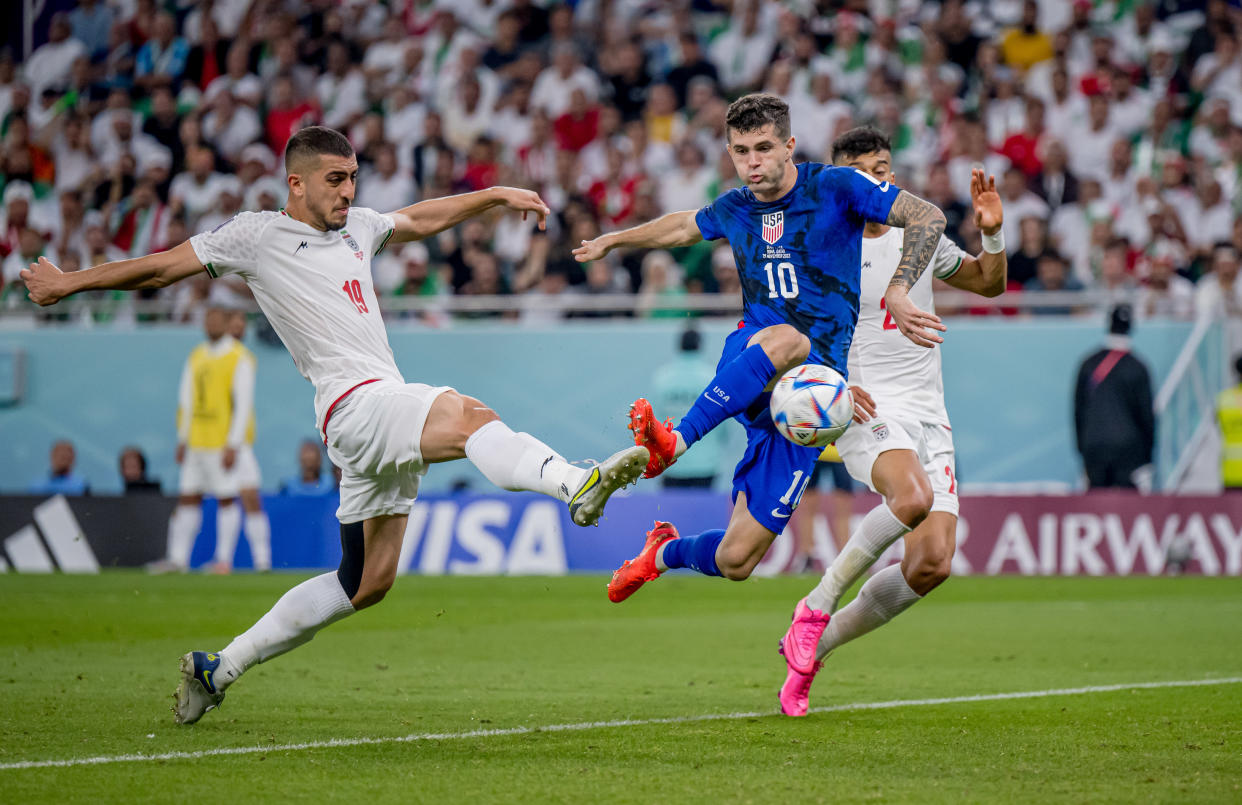 DOHA, Qatar — “Captain America” began his dart away from unbearable pressure into the Promised Land at 10:37 p.m., from out of Iran’s view and toward the World Cup knockout rounds. He burst through deafening Iranian noise, away from the specter of elimination and into the penalty box. And here, on the biggest stage of all, a split-second before clattering into a goalkeeper, Christian Pulisic arrived.

He simultaneously shaped his foot and flung his body into harm’s way, and scored an elusive goal that gave the U.S. men’s national team a 1-0 victory over Iran on Tuesday.

It clinched the USMNT a Saturday Round of 16 date with the Netherlands, and ended an agonizing wait. The U.S. had spent over 200 minutes here in Qatar bossing games and rising to occasions. For what seemed like ages, though, since the first half of its opener, it couldn’t find a goal.

But then Weston McKennie lifted his head, and Sergiño Dest got on his horse. McKennie picked out Dest, and as he did, Pulisic began the killer run, from 30 yards out right through the heart of the Iran defense. Dest headed a floating ball into his path, and Pulisic, with a leap that would cost him his health and the second half of the match, broke the deadlock.

IT'S CHRISTIAN PULISIC WITH THE BREAKTHROUGH ‼️ 🇺🇸pic.twitter.com/X8aLxUgSPz

For Pulisic, it was a moment years and perhaps a lifetime in the making, made in Hershey, Pennsylvania, and then amid all sorts of stress in Dortmund and London. It was a moment he longed for, especially after the USMNT’s failure to qualify for the 2018 World Cup, which brought him to inconsolable tears.

But in the interim, an exuberant team grew around him. Molded by a youth development overhaul, and then by a new head coach, Gregg Berhalter; and fueled by a bevy of young talent, the USMNT arrived at this World Cup ready to show that they were a program reborn.

Prior to Tuesday, through two matches, they’d been impressive but wasteful. They squandered opportunity after opportunity to put Wales away in their opener, and Gareth Bale made them pay. They outplayed England, but missed chances and incisive passes in a 0-0 draw. “It's hard to come by goals, and that's what we've found,” Berhalter admitted.

He and players maintained faith that the goals would come, though, in a win-or-go-home versus Iran.

For over a half-hour, their story remained the same. They domineered the ball, and got into semi-dangerous positions, but couldn’t find a breakthrough. Pulisic tried to knife through the middle of a compact Iranian defense, but couldn’t. Dest flashed a cross across the face of goal, but nobody attacked it. Weah saw the ball looping into his lap, at the heart of the penalty area, but didn’t realize he had time to bring it down.

With every passing minute, and every crescendoing chant from an overwhelmingly pro-Iranian crowd, tension grew. Weah couldn’t quite find Pulisic with a cut-back. Dest beat two men, but had his left-footed shot from the top of the box blocked.

It all felt too familiar and frustrating, until Pulisic appeared out of nowhere to change the narrative. 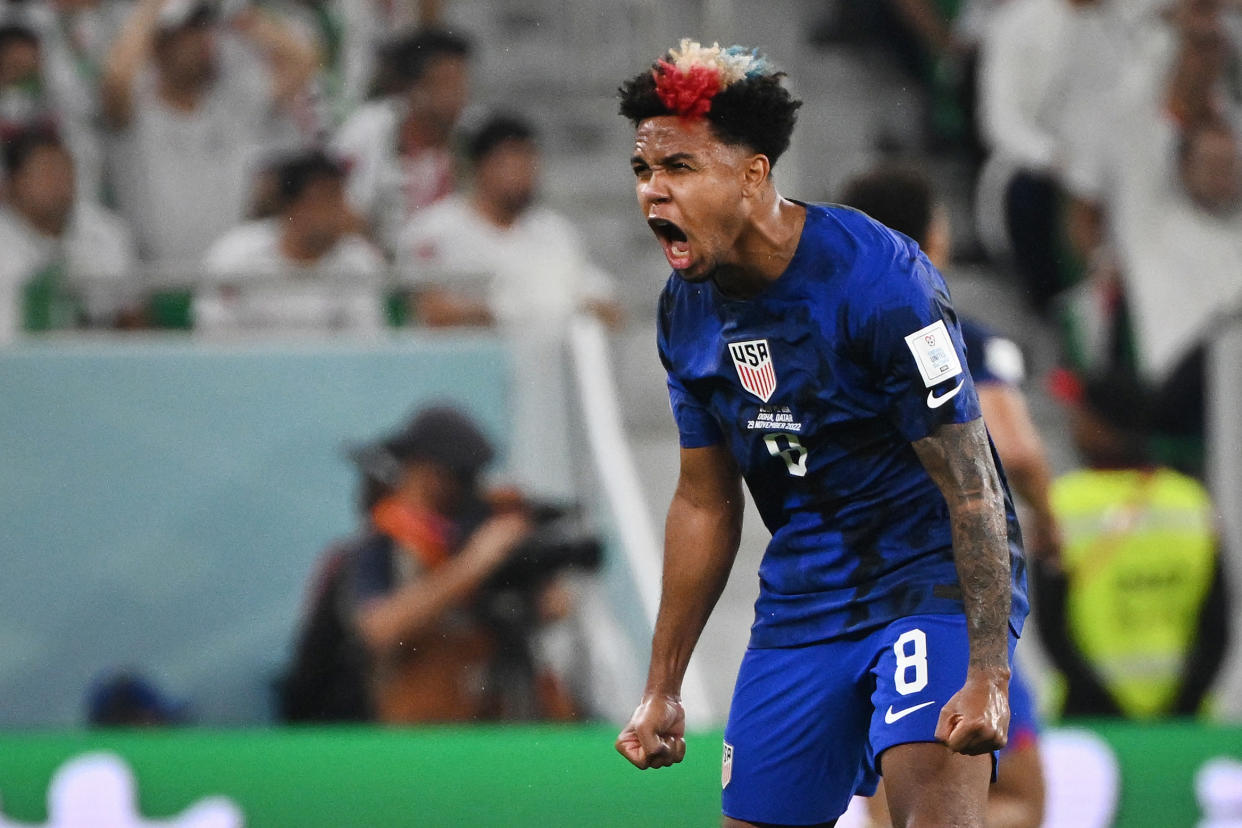 He suffered a painful injury on the play, and had to be withdrawn at halftime. But the U.S. no longer needed a goal; it just needed to hang on, and it did. Tim Ream and Cameron Carter-Vickers, starting together for the very first time as a center back pairing, were immense. Yunus Musah was active and explosive. Tyler Adams, as always, was everywhere.

Iran piled on pressure as the game wore on. The USMNT’s biggest challenge was that Team Melli was, simply, a very stiff soccer challenge. But the U.S. warded it off. It weathered two injuries, to Pulisic and Josh Sargent. McKennie also came off in the second half, and seemed to be nursing his right upper-leg.

But what mattered was the result. It is what they all had worked four years for. It’s why they journeyed throughout Central America, and sacrificed so much family time, pushed so hard.

It sets up a Saturday date with the Dutch, who’ll be favored, but who are beatable. Another win there, at 10 a.m. ET at the Khalifa Stadium, would take the Americans to a quarterfinal that could feature Argentina, but also could yield a far weaker foe like Poland, Denmark or Australia.

So it is time to celebrate, and then to dream. The first of two tournaments within the tournament, as Berhalter has always framed it, has been won. The second, a four-round knockout gauntlet, presents endless possibilities.