‘You are free of me’: Iraqi cleric quits politics, deadly protests follow

Baghdad: Followers of a prominent Shiite cleric stormed Iraq’s presidential palace on Monday, in an outburst of anger following the cleric’s vow to quit politics that resulted in clashes with security forces and left at least eight people dead, health officials said.

The violence was the most serious during a summer of unrest in Iraq, which has been without a government for the better part of a year and captive to escalating feuds between political factions, including followers of the cleric, Muqtada al-Sadr, and rival Shiite groups that are backed by Iran. 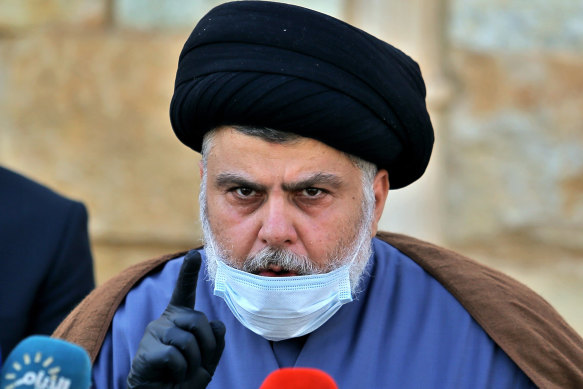 Sadr’s followers stormed the palace Monday after he announced his “final” retirement from politics – a threat he has made before, during years in the public eye, but one that could have more serious consequences in the charged political climate, and with the country ruled by a caretaker government.

“You are free of me,” Sadr told his supporters in a message posted Monday afternoon on Twitter announcing his resignation.

The fallout was immediate. Sadr’s supporters, who had been holding a sit-in inside the Green Zone, where government offices and diplomatic missions are located, scaled the gates of the palace and paraded through its ornate halls, in scenes shared on social media. Soon afterward, sounds of live ammunition echoed in the capital, as security forces descended on the protesters. 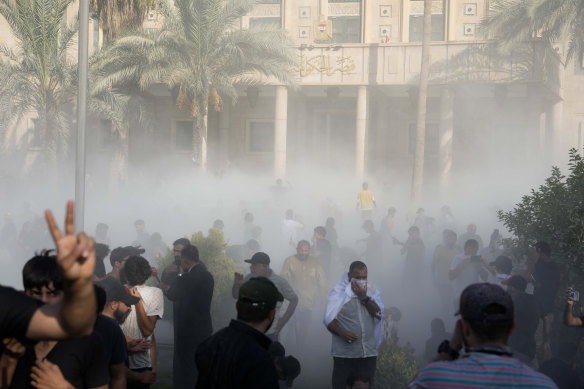 Iraq’s political dysfunction – a feature of civic life since the US invasion nearly two decades ago entrenched a sectarian, kleptocratic order – entered its latest phase in October, when Sadr won the largest number of seats in parliament but failed to form a government. After months of political paralysis, Sadr withdrew his lawmakers from the legislature in June and sent his followers to occupy the parliament.

Elsewhere in Iraq, Sadr’s supporters blockaded roads and government buildings, including in Basra, in the south. The United Nations mission in Iraq called the developments an “extremely dangerous escalation,” and implored protesters to withdraw from the Green Zone.

“Iraqis cannot be held hostage to an unpredictable and untenable situation. The very survival of the State is at stake,” the mission said in a statement.

A political bloc rivalling Sadr, comprising Shiite groups backed by Iran, has also held protests and sit-ins in the Green Zone, raising fears of a confrontation. In the background of the political infighting, Iraqis have suffered mightily, as state institutions, from schools to hospitals, deteriorate without government support.

Sadr, a populist who has opposed both US and Iranian influence in Iraq, has called for early elections, as well as the barring of political figures who served after the US invasion from working in government.

Health officials on Monday did not identify the victims of the violence but said some had been shot in the chest or the stomach. A statement Monday night by Iraq’s caretaker prime minister, Mustafa al-Kadhimi, said the use of live ammunition by the security forces was “strictly prohibited,” and he called for the protection of protesters.