After decades of speculation surrounding her sexuality, Scooby-Doo’s Velma Dinkley has finally been confirmed as lesbian in the latest animated film Trick or Treat Scooby-Doo!

The move comes two years after James Gunn, who penned the live-action Scooby-Doo films, revealed he wrote Velma as ‘explicitly gay’ before it was ‘watered down’ by the studio and ultimately removed. 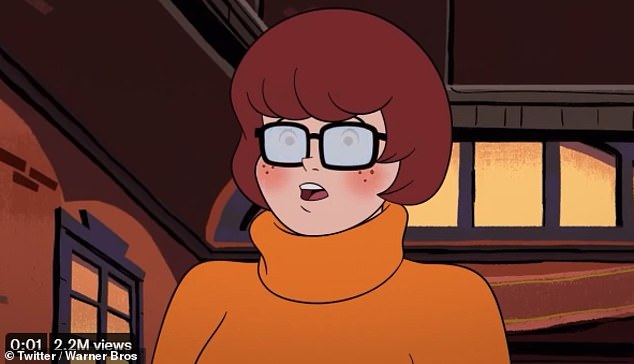 Velma is shown becoming instantly infatuated by Coco when she first meets the glamorous woman.

In the clip, Velma stops in her tracks at the sight of Coco before blushing profusely.

‘And as promised, here are your Scooby snacks -‘ she begins before the sight of Coco catches her off guard.

In another clip, Velma fawns over Coco and is unable to hide her infuriation after Coco rests her hand on her shoulder. 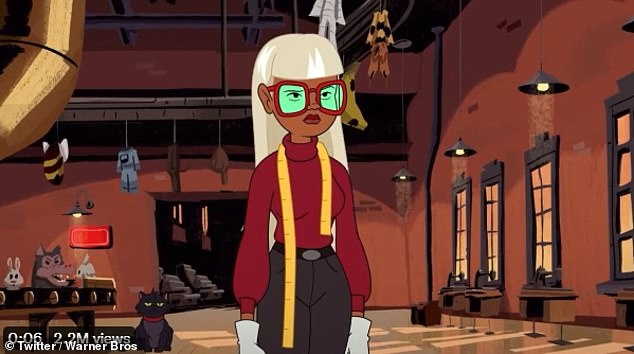 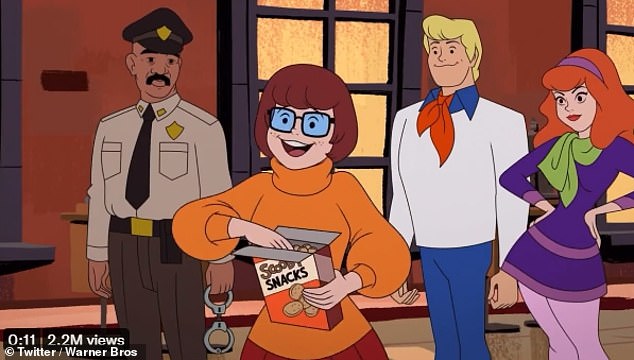 Love at first sight! Velma is stopped in her tracks when she first meets Coco

‘I’m sure that Coco made some brilliant observations!’ Velma raves before Coco gently places her hand on her shoulder, prompting the turtleneck clad detective to melt.

Velma’s sexuality finally becoming canon delighted fans all across Twitter after decades of speculation the character was indeed lesbian. 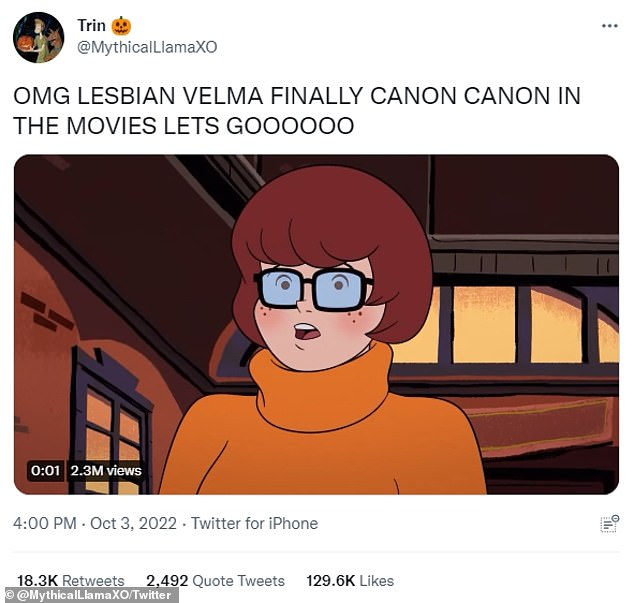 It’s official! Fans expressed their delight over the Velma revelation on Twitter 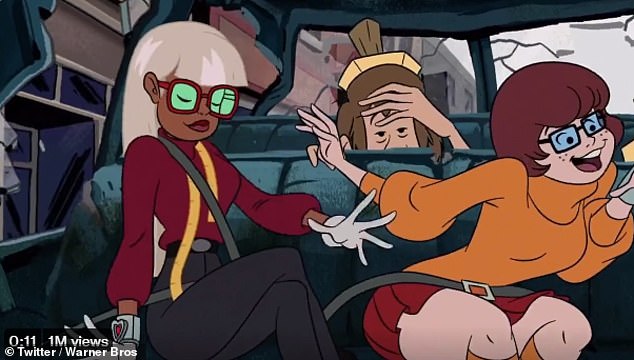 Aww! In another clip, Velma fawns over Coco and is unable to hide her infuriation after Coco rests her hand on her shoulder 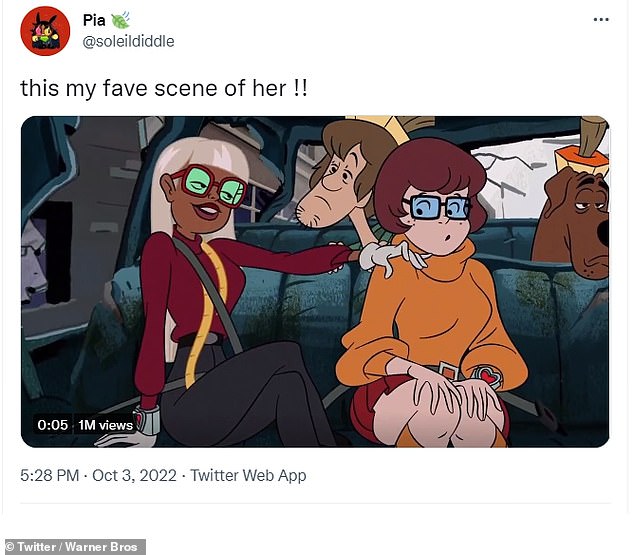 Sparks are flying! Coco rests her hand on Velma’s shoulder

‘Velma getting her lesbian debut after five decades thank u,’ tweeted another.

‘glad that velma dinkley gets to be officially a lesbian now but this is extremely unfair to my man shaggy: if we’re making all the old rumors true we MUST let him SMOKE WEED,’ tweeted another.

‘We have won. Velma is a lesbian with impeccable tastes,’ tweeted another.

‘Velma being gay is actually massive, we’re at a point in time when this major character, full of decades-old history and fans, gets to actually be a lesbian and that’s just another part of her canon now! Sometimes we need to celebrate these wins,’ another posted. 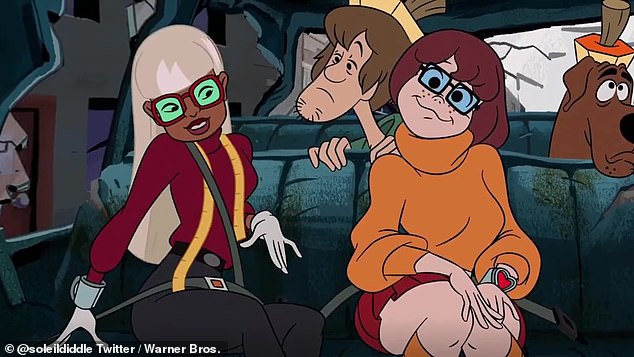 ‘I’m sure that Coco made some brilliant observations!’ Velma raves before Coco gently places her hand on her shoulder, prompting the turtleneck clad detective to melt 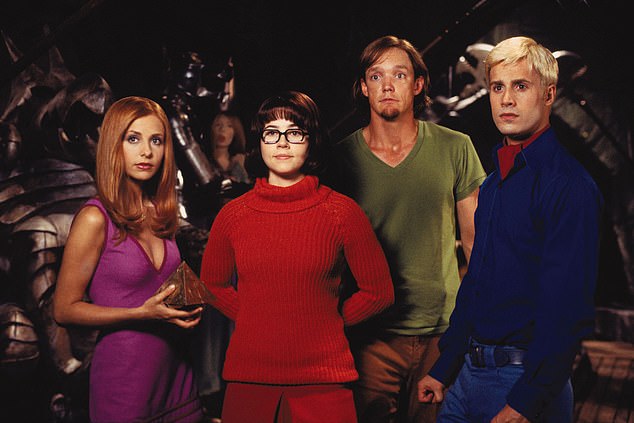 ‘In 2001 Velma was explicitly gay in my initial script’: The latest development comes over two years after Gunn revealed he had attempted to make Velma lesbian in his films

The latest development comes over two years after Gunn revealed he had attempted to make Velma lesbian in his script for the live-action films. Gunn wrote the 2002 film Scooby-Doo and 2004’s Scooby-Doo 2: Monsters Unleashed, both of which starred Linda Cardellini as Velma.

‘In 2001 Velma was explicitly gay in my initial script. But the studio just kept watering it down & watering it down, becoming ambiguous (the version shot), then nothing (the released version) & finally having a boyfriend (the sequel),’ he tweeted.

Tony Cervone, a supervising producer on the Scooby-Doo! Mystery Incorporated series, also previously clarified Velma was intended to be gay.

‘I’ve said this before, but Velma in ‘Mystery Incorporated’ is not bi. She’s gay,’ he wrote on Instagram in 2020. ‘We always planned on Velma acting a little off and out of character when she was dating Shaggy because that relationship was wrong for her and she had unspoken difficulty with the why. 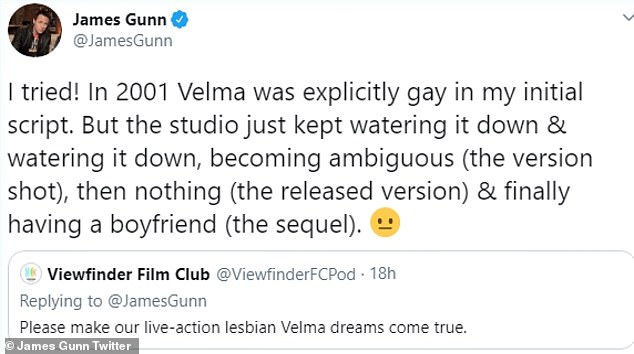 Speaking out: Gunn opened up about his attempts to make Velma lesbian back in 2020 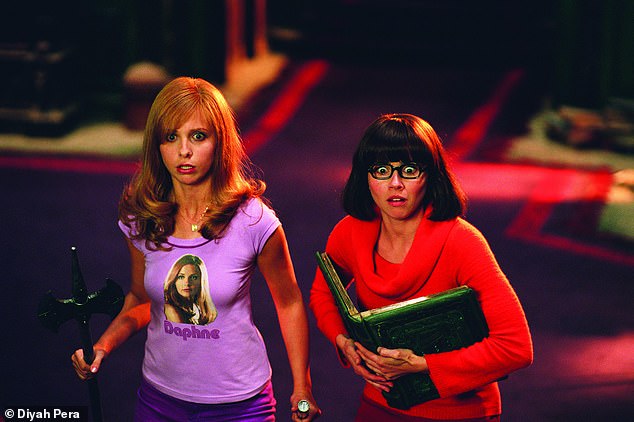 ‘There are hints about the why in that episode with the mermaid, and if you follow the entire Marcie arc it seems as clear as we could make it 10 years ago. I don’t think Marcie and Velma had time to act on their feelings during the main timeline, but post reset, they are a couple. You can not like it, but this was our intention.’

Warner Brothers altered the video game after user feedback branded Velma a ‘Karen’ because of her tendency to call the police when a crime was successfully solved.

Velma, the bookish brunette member of the crime-solving gang, was designed in the new game to be able to flash a ‘wanted’ poster and signal for the cops to come once enough evidence had been gathered against a suspect.

‘Velma is a lesbian with impeccable tastes’: Velma’s sexuality finally becoming canon delighted fans all across Twitter after decades of speculation the character was indeed lesbian 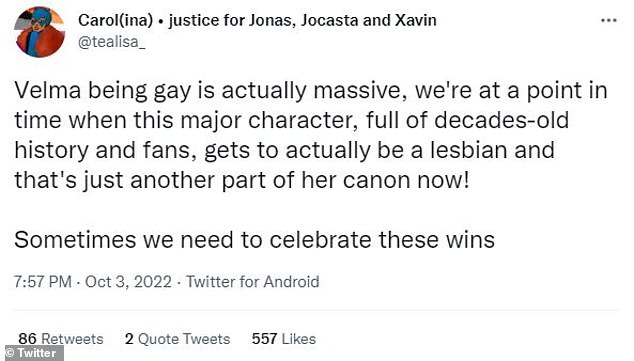 But that move did not fly with some of the 20 million users who have played the free game that features characters from across the Warner Bros. Discovery catalogue since its July release.

The game was met with generally positive reviews and has become popular with online users but dissatisfaction with white woman Velma’s special ability to call the cops on characters, including Space Jam’s Lebron James, left some with a bad taste in their mouths.

One change.org petition, which drew just 33 signatures, asks the company to remove the cop car from a chase scene involving Velma.

‘For decades, and especially in recent times, Black & Indigenous people of color around the world have suffered under police brutality and this cop car is ignoring the problem of police brutality in this day [and] age,’ reads the petition.

Another Twitter user said Velma’s utilization of law enforcement in the game made him, as a black man, feel uncomfortable.

‘I am enjoying Velma in Multiversus but main(t)aining a character who’s special move is calling the police on her enemies definitely don’t sit right with me as a black man lol,’ wrote the account ‘he who vibes.’

Last month, Warner Bros. caved to the online objectors and altered Velma’s special move. She now calls the Mystery Squad to come grab her felons when she’s done with them.

The company did not give a reason for the change and it was rolled out alongside a handful of other small alterations made to the game post-release.